Now reading: How To Stay Safe In the Water – A guide to avoiding Sharks

Swimming in the sea is never guaranteed to be safe, besides the tides and crashing waves you are in the territory of a vast amount of marine life and that alone comes with many risks. The biggest fear for many beach goers and surfers though, is coming into contact with a shark.

There are hundreds of species of sharks in the sea, many of them occur off our coastline. Not all of them pose a threat to humans, there are a very small handful that you, as a surfer or swimmer, are more likely to come into contact with. 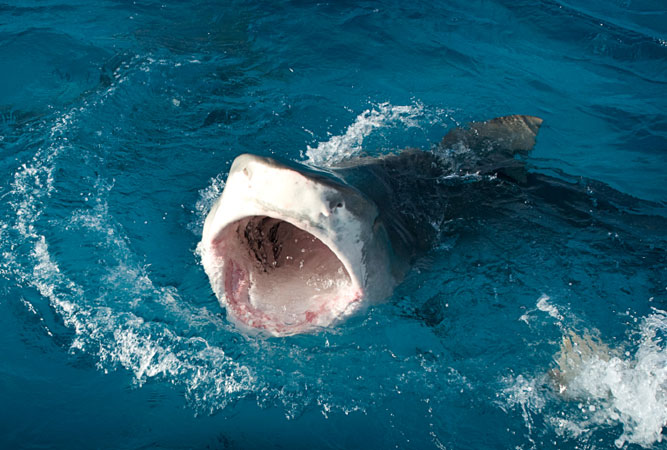 This is one of the most unpredictable sharks. This shark can get up to about 6 meters in length and is found mainly off the coast of KwaZulu Natal. Once a Tiger shark starts attacking it continues ferociously, although they very rarely attack humans.

This shark is relatively small at 3 meters long but with a wide girth. The Bull shark has been the culprit of many attacks along the Wild Coast and the KwaZulu Natal coastline. Shark nets in the area have eradicated these encounters. They are usually found in warmer waters near river mouths as they thrive in shallower waters and swim upstream to feed. 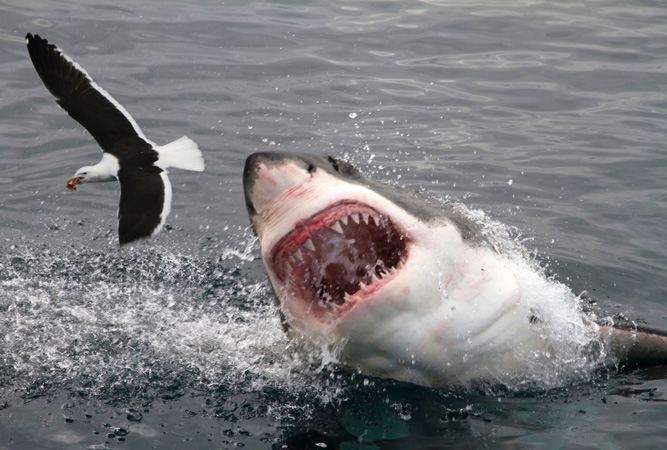 This magnificent creature can grow to 6.1 meters although the largest one found in south africa was only 5.9 meters long. This is one of the most feared sharks amongst humans. This shark is very wary and mysterious. It feeds mainly on seals, other sharks and rays as well as bony fish. They have been known to attack dolphins and feed on whale carcasses.

This slow moving shark stays relatively close to the bottom. They are very docile and are only dangerous when provoked. Their jagged teeth make them look a lot more ferocious than they are. They usually grow up to about 3.6 meters and are rather stocky. 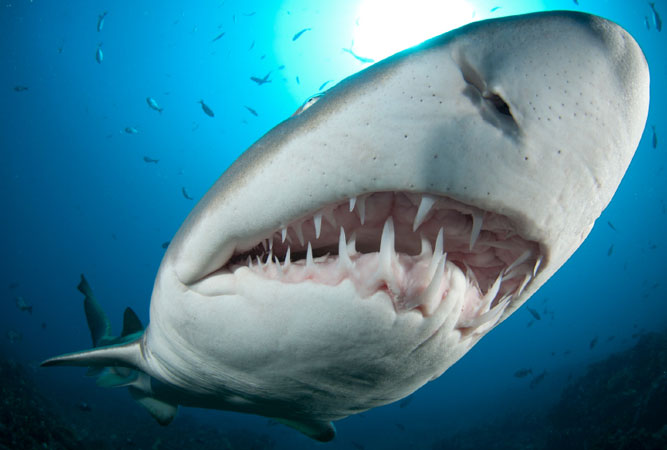 When to go in the water

If you are going to the beach or deciding to head out in the water you should watch for the shark spotting flags. Each coloured flag has a different meaning and will indicate whether or not it is safe to swim or surf. 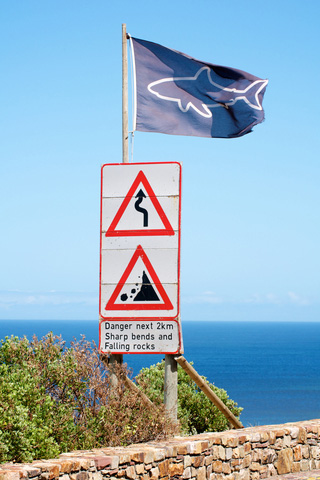 Visibility is good for shark spotters and no sharks have been seen here.

This indicates that there is poor visibility and no sharks have been seen by shark spotters.

A shark was spotted recently but is no longer visible to spotters (the board on the beach will indicate time of spotting).

This flag has a picture of a black shark on it and shows that a shark has been spotted. You will usually hear a loud siren when this flag is raised. If you are in the water you should get out calmly and immediately.

If there is no flag to be seen it means that there are no shark spotters on duty. Swimming is at your own risk.

As with most things, when you swim in the sea you need to take precautions and be wary and sensible. Don’t swim or surf near river mouths, don’t stay in the water after sunset, don’t surf or swim near fisherman or where there is bait game and actively feeding seabirds. Don’t swim in the water if no shark spotters are on duty.

If you do see a shark, try not to splash around like crazy and swim away in a frenzy, you then appear to be injured prey and are more likely to attract the shark’s attention. If you can, stay where you are, remain calm and if possible go under water, let it know that you have seen it. You will then appear as another predator and not prey and perhaps the shark will pass you by.