Everyone has a fond memory of taking the train in their childhood – piling on with mom and dad, the luggage (ours were a series of rather dramatic, bright red suitcases that included a small, square one for my mother’s cosmetics), egg and mayo sandwiches and the welcome delight of sleeping under crisp white sheets as the wheels chugged gently beneath you.

Remarkably, the inter-city train of our youth still exists, in the form of the Shosholoza Meyl, named such after the popular South African song about train workers. The word ‘meyl’ refers to a long distance by train. One would think I could have at least suspected that this rather obvious fact would probably be the train’s biggest challenge. 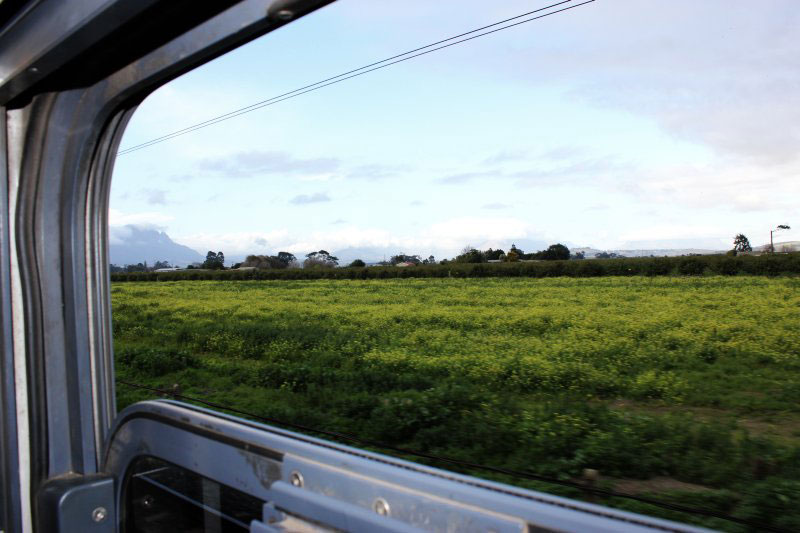 And more remarkably, my romantic side that sometimes rather naively chooses to remain exhuberantly upbeat about anything (my sister, for instance, would never succumb to rail travel in [link_sa]South Africa[/link_sa], but then she used to work for Spoornet) recently abandoned all reason and booked a return ticket for my family of three from Cape Town to Johannesburg, and back again.

I didn’t go in completely unprepared. I had done my homework. I read the articles and whinges by unhappy customers complaining about the delays. But hey, forewarned is forearmed, is it not? And it was a LOT cheaper than flying – R420 single per adult, and half that for a child under nine. And there was that memory of chugging wheels over train tracks to contend with. Besides, how bad could it be?

I should explain that I am not a happy air traveller. I suffer air sickness and usually walk around on the day of flying in a drug-induced coma, having swallowed an anti-airsickness tablet that leaves me completely out of it – I am also sensitive to drugs and usually need only half of what everyone else takes, but am too nervous to put this to the test when it comes to air travel. I also cannot abide airports, or delayed aeroplanes.

That said, having now experienced the Shosholoza Meyl, I LOVE airports, can’t get enough of them, and would gladly suffer the delays experienced on Kulula and One Time, whilst sipping cappuccino at Fournos Bakery at OR Tambo. 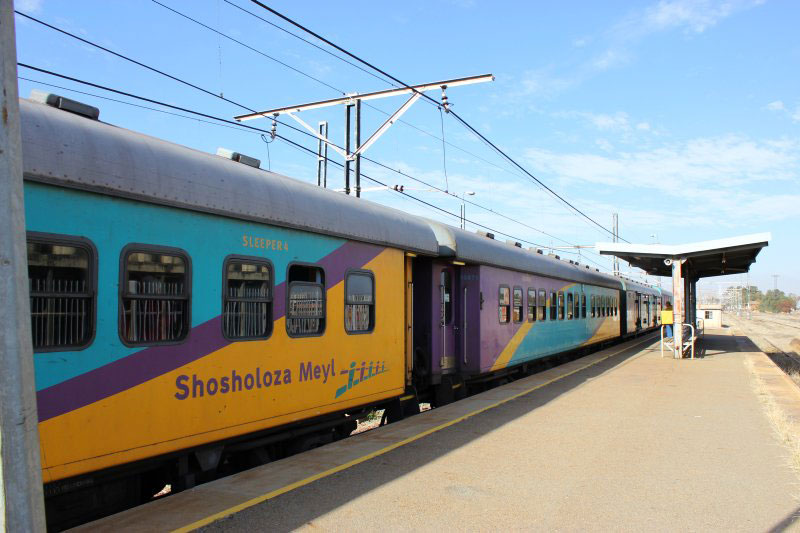 The Shosholoza Meyl has a rather jaunty exterior. It is predominantly painted a bright purple, with an accompanying swathe of turquoise and yellow that lend it a youthful, and bold attitude. By contrast, we arrived more than slightly dishevelled on the platform, having had to push our way through a rather manic crowd attempting to make their way to the seater compartments of the train. This was just as well, as it turned out that the sleeper compartments, all four of them if you ignore the two for staff, were tacked on like an afterthought to the rest of the train – in other words, at the back (although this is reversed on the return journey).

Whilst the service runs a premier train (which alludes to semi-luxury and costs a lot more than our sleeper compartments), the economy sleeper train wasn’t doing so well, so they reduced the number of sleeper compartments (each has six 4-person compartments and two 2-person coupés) and, it seems, added them to the sitter ‘economy’ trains; nine sitter compartments – each of which take 18 rows of 4 seats (I’ll leave you to do the maths) and called it a tourist train.

This goes a long way to explaining the crush of people, with more luggage than is conceivable for individuals to take, particularly if they are occupying but one seat, that passed us. Up that end getting a window seat is obviously something of a bun fight. Down our end, we were shuffling up the aisles trying to find our berth. This done, we arranged all of our luggage overhead and settled in to enjoy the view. The train of my youth has not changed one iota. In fact I’m prepared to bet that, despite the change in upholstery, the train in which we journeyed is the same as the one I was in thirty years ago – the one with the table that folds down over the basin, you must remember?

The trip was worth it just for my five-year old’s enjoyment. He loved the train. There was plenty of space to climb and walk around, mom had packed enough snacks and food to keep him happy, he had books and games to keep him amused, and on the way there, a little friend in the next compartment where he was eagerly adopted, which means we got to read and relax, making it heavenly. You don’t fight for leg room on a train. 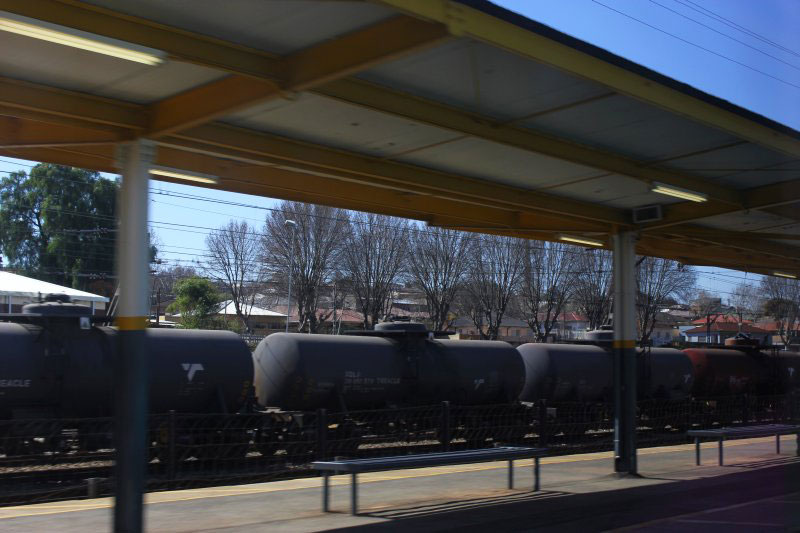 The downsides. Well, they are numerous. But it really depends on your capacity to ignore the niggles and enjoy it come what may, or if you find these more than you are prepared to deal with.

People smoke on the train. They’re not supposed to, and if you’re lucky, they’ll find another part of the train in which to do it. But on our trip up to Johannesburg, a couple of women with what looked like at least five children, in one compartment, smoked, and made a noise until all hours of the morning. My stumbling across to complain resulted only in a huge spurt of deodorant sent my way intended, I’m assuming, to disguise the stench.

There is a lot of noise at night. This is because the train stops at stations and people get on and off. That is the function of a train, after all. But if you’re a light sleeper, forget about getting any. Our coach on the return journey had some sort of machinery that wound itself up with a large groan every minute or so, which put paid to any sleep we might have got.

The bedding is rather amusing. It arrives in a leather pouch and is literally spilt out onto the bed ready-made layers and tucked in. It’s clean, comfortable and lovely to lie in, but hopelessly inadequate if the heating doesn’t work, which it didn’t.

And you might want to take your own food. It is worth preparing meals ahead of time as the food is fine if hamburgers and chips, greasy toasted sandwiches and instant coffee are your thing, but vegetables and salads don’t even get a look-in. Having said that, the dining car has the best windows and views, and the tea is cheap and cheerful.

Whether or not you get good service depends very much on the manager of the train. On the way up we saw the ‘manager’ exactly once. She introduced herself and then disappeared. On the way back, he couldn’t do enough, stopping off at intervals to take complaints squarely on the shoulders (did I mention that first calls for morning coffee are at 6.30am, when you’ve only just got off to sleep?), whilst explaining that most of them were largely beyond his control. 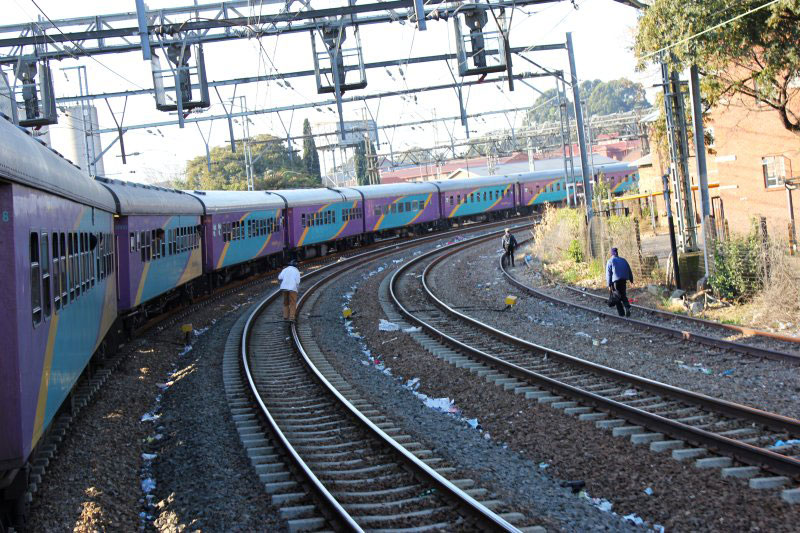 On the way up we were five hours late. On the way down, only an hour.

Would I do it again? Probably not. I loved the relaxation of riding on the train, the views from the train, and the fact that you have a compartment to yourselves. But it’s a long time to spend on a journey – 26 hours on a good trip – and there are obviously serious issues with arriving anywhere on time.

Is the Shosholoza Meyl an alternative to air travel? No. But it does compare well with road travel in terms of comfort. And it’s quite a lot safer.