When you dream of Greece, you think moussaka. Italy brings pasta to mind. And where would Israel be without the falafel?

Yet South Africa does not really have one ubiquitous, national dish, a food typically associated only with the south of the continent; something like paella in Spain, hamburgers in America, or roast beef and Yorkshire pudding in England (although, admittedly, things have moved on a little in the UK).

Instead we have a number of dishes the rest of the world, and the locals, associate strongly with South African Cuisine. Here are 10 uniquely South African foods…

The closest thing to biltong is the American beef jerky (although there are those who claim that jerky doesn’t even come close to the South African classic) but whereas jerky is made from strips of virtually fat-free meat, biltong has a huge variety of cuts, some with as much as 50 per cent fat.

Generally speaking biltong is more tender and moist, but this depends on the cut, the amount of salt or spice used, and the time allowed for drying. Various meats are used ranging from beef to game meats. Suffice it to say: you cannot separate a South African from his biltong. 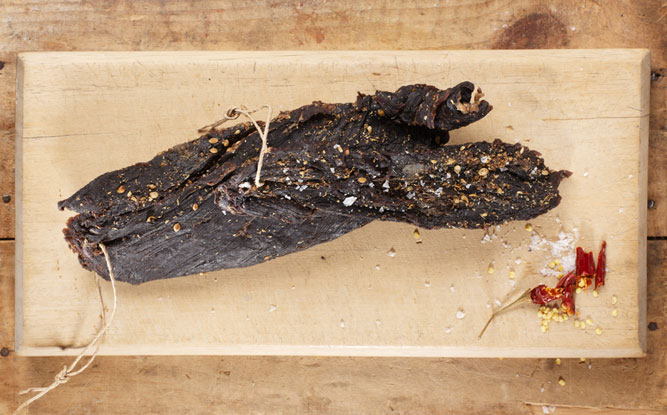 A typical South African dish made from sweet and spiced minced meat – often including curry powder –  and an egg-based topping, served with yellow rice and sambal. Bobotie has its origins in Malay, Java and Indian cuisine – all communities from which the Cape Malay community is descended.

Finding themselves without access to traditional spices and staples like coconut milk, they adjusted the dishes using spices brought in by the Dutch East India Company. The dish has been in the country since the 17th century and originally used ingredients like ginger, marjoram and lemon rind.

Straight off the streets of Durban, and now in evidence in restaurants as far-flung as London, the bunny chow is curry served in a quarter of hollowed-out white bread loaf. Also referred to as a kota or ‘quarter’ it is a staple ‘street’ food. It descends from Durban’s large ethnic Indian community, is cheap and cheerful, and easily portable.

Rumour has it that the bunny originated from the Royal Durban Golf Club where the caddies, unable to get time off for lunch, asked their friends to bring back curries for them. The lack of containers resulted in the hollowed out loaves, using the remaining bread as a tool to dip. 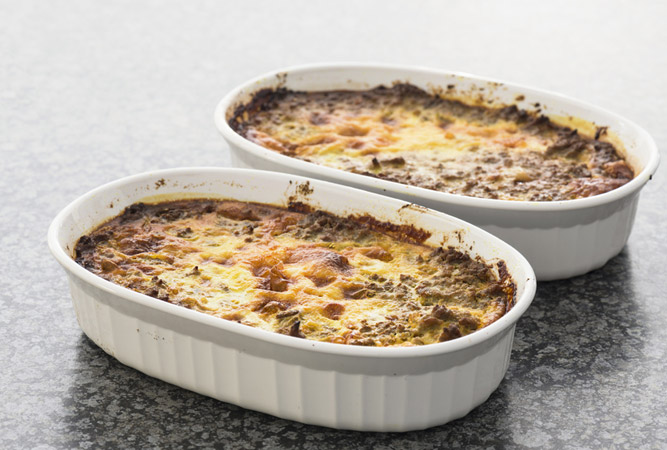 A particularly spicy dish of onions, tomatoes and sometimes beans, chakalaka originates in the townships of South Africa. It is usually served with bread, pap, samp, stews or curries and is a prerequisite of any braai. There are as many recipes as there are households but it usually includes onions, bell peppers, hot chilli peppers, tomatoes, curry powder and baked beans.

Just about the stickiest, most syrupy sweet something possible, a koeksister is a deep-fried, plaited dough roll dipped in sugar syrup. Or, at least, the Afrikaner version is.

The Cape Malay koe’sister (meaning polite gossiping amongst spinsters) is not quite as syrupy or crisp as the Afrikaner version but is rather an oval, fried dumpling with a texture closer to cake with a dough that includes cinnamon, aniseed, cardamom and ginger. After frying it is rolled in desicated coconut. 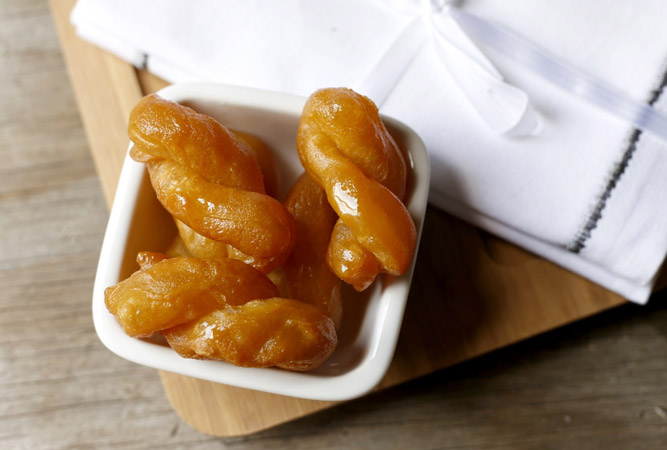 Milk tart is an Afrikaner dessert made from a sweet pastry crust that contains a creamy, milky filling made from milk, flour, sugar and eggs. It is something akin to the traditional European custard tart and is said to have descended from traditional Dutch cuisine. An alternative recipe includes cinnamon, cardamom and almond essence and makes use of puff pastry, rather than shortcrust pastry.

The traditional braai is not complete without the boerwors (farmer sausage), or ‘wors, and the pap, a mielie (maize) based porridge that can be as stiff or runny as you like it.

Boerewors is a spicy meat sausage traditionally made with beef, some pork and little else (if it’s made by a local butcher who leaves out the fillers and cereals that many supermarkets add to theirs) and based on a Dutch sausage called the verse worst. The two are usually served with a sauce made of tomato relish, sugar, tomato sauce and soya sauce. 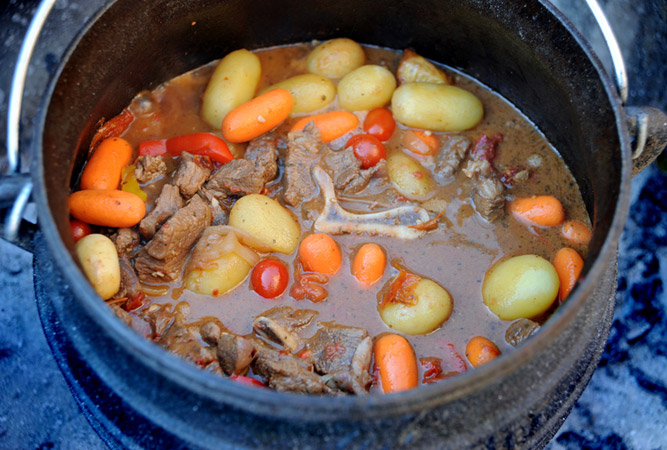 Potjiekos, or small pot of food, refers to a stew prepared in a pot outdoors. Traditionally the pot is a cast iron, three-legged pot or potjie, descended from the Dutch who brought it to South Africa in the 17th century where it was adopted by the Voortrekkers. Today just about every home in South Africa has such a pot.

There are no rules as to the stew, other than it should need little supervision and can be left to virtually cook itself, usually on an open fire.

Vetkoek (fat cake) is a traditional Afrikaner pastry – dough deepfried in oil, filled either with mince, or spread with syrup, honey or jam. Its origins are thought to lie with the Dutch oliebollen. The fat cake is shaped like a doughnut, but without the hole, and is typically made from flour, salt, sugar, water and yeast. It also has its traditional place at a braai. 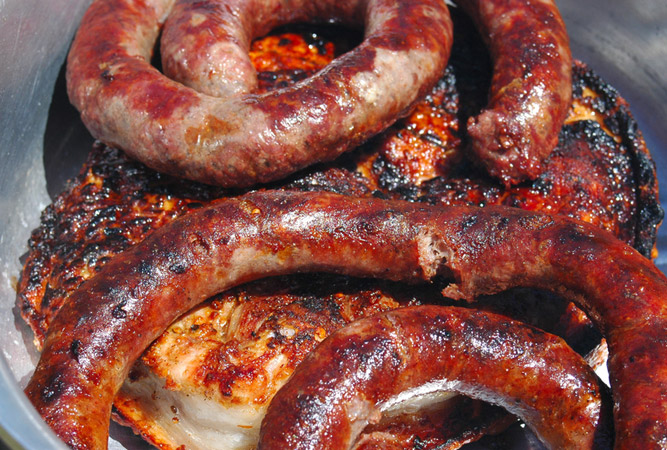 Chicken feet are traditionally eaten in townships across the country as a snack, where they are called walkie talkies. The feet are put into boiling water to remove the skin, covered with seasoning and then cooked.