Monuments, statues and memorials to commemorate a notable person or event are part of the fabric of travel. They draw countless thousands of people in every city of the world.

They queue to see: Copenhagen’s Little Mermaid, Michelangelo’s David, The Taj Mahal in India, New York’s statue of Liberty, the Great Buddha, Japan – works that hold not only a vivid image, but also an impression of the country in which they stand.

Known as the Madonna of the townships, Brenda Fassie was one of the continent’s biggest stars. Her sculpture, by artist Angus Taylor, is a 1570 metre life-size statue that stands outside the Bassline music venue in Newtown. The work perches on a barstool with a mike in front of her. Next to her is a second barstool – an invitation to sit. The sculpture is one of nine art works placed by The Sunday Times around the country to promote a national identity (three have been featured in this blog). It is one of numerous statues and art works in the Newtown precinct worth seeing.

Opposite the old colonial buildings on Church Street in Pietermaritzburg stands the statue of Gandhi, whose notorious ejection from a train shaped his policy of ‘Satyagraha’ or passive resistance. Here he is depicted in his traditional dhoti, staff in hand, the statue a commemoration of the centenary of his forceful removal. 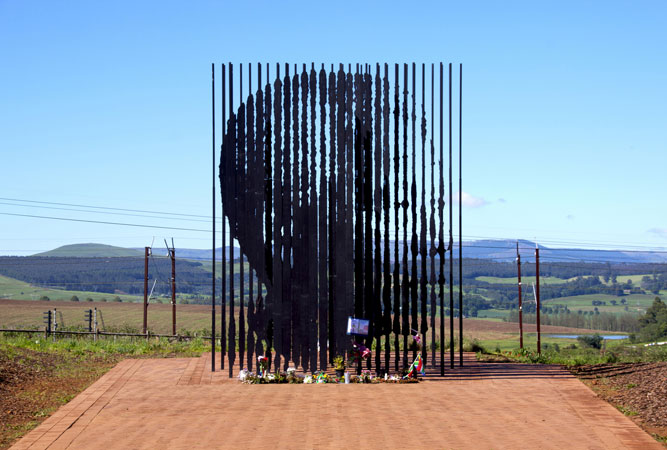 The recent extraordinary sculpture of Nelson Mandela, by artist Marco Cianfanelli, of 50 steel column constructions, each between 6.5 and 9.5 metres high, in the heart of the KwaZulu-Natal Midlands just outside Howick, is without doubt one of the country’s most unconventional. From the front a portrait of Mandela is clearly visible, whilst the vertical bars, through which one can pass, represent his imprisonment. The artist also describes how a walk through the columns ‘radiates like a burst of light’ to symbolise the political uprising of people, and a sense of solidarity.

A series of  metal figures representing all the communities who share South Africa and who voted peacefully on 27 April 1994, South Africa’s first free democratic elections, are the subject of this unusual sculpture at the foot of the drum of the Great Flag in the Donkin Reserve in Port Elizabeth, by artist Anthony Harris. The metal sculpture is 36.6 metres long, a depiction of 48 different ‘character figures’ – people of all shapes and sizes from Mandela Bay.  At the front of the queue is a metal cut-out of Nelson Mandela, his fist in the air. 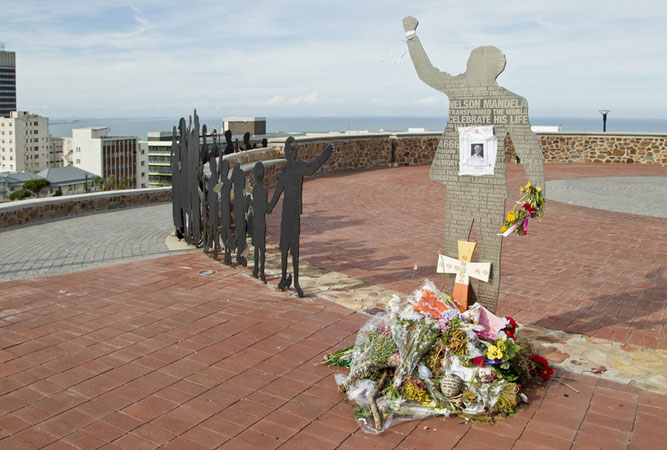 Larger than life bronze statues of Nelson Mandela and Desmond Tutu stand alongside two other Nobel Prize winners – Albert Luthuli and FW de Klerk – in the Waterfront square in Cape Town. In front of each sculpture, created by Claudette Schreuders, is each of their preferred quotes in their chosen languages. All four great men played pivotal roles in bringing about democracy in South Africa. Also in the square is the Peace and Democracy sculpture by Noria Mabasa.

Not a statue per se, but the Pig & Whistle Inn in Bathurst is the oldest continuously operating pub in South Africa. Now a national monument the inn was built in 1832 by Thomas Hartley, an 1820 settler alongside his forge. He billed the inn as ‘subscription rooms for gentlemen’ and his guests included Lord Charles Somerset and Sir Benjamin D’Urban. Originally known as the Bathurst Inn, the inn acquired its current name when British soldiers stationed nearby named it after their local pub in England. 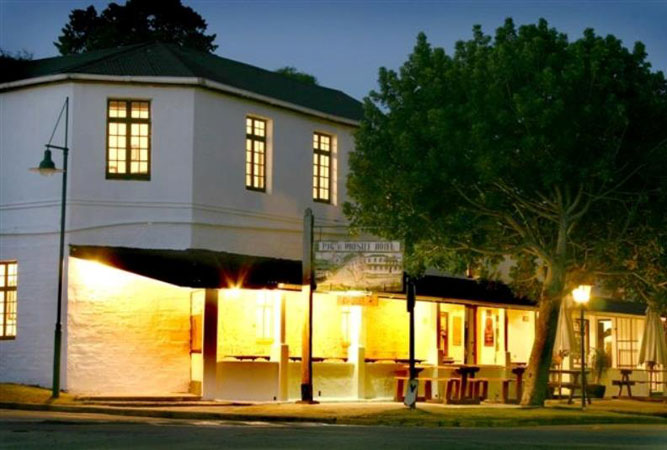 Another one of the Sunday Times art works, Roderick Sauls has drawn attention to one of the ways in which the laws of apartheid was applied by designing a memorial to remind us. At the same time he gives those who pass these benches something to think about. The benches now sit outside the Old Race Classification Appeal Board on Queen Victoria Street in the City Centre, the scene of formal hearings where people came before a panel who decided what ‘race’ they should be. The classification was subjective and families were often split apart when paler or darker skinned children or parents were placed in different categories.

The various tapering obelisks that make up the Taal (language) Monument stand on Paarl Rock, a huge granite outcrop overlooking the town of Paarl. The three convex and concave spheres, designed by Jan van Wijk, symbolise the influence of the West, Malays and African people on the Afrikaans language. The soaring pillar is the growth of Afrikaans. It is an unashamed tribute and recognition of the language, with beautiful views out over the valley below. 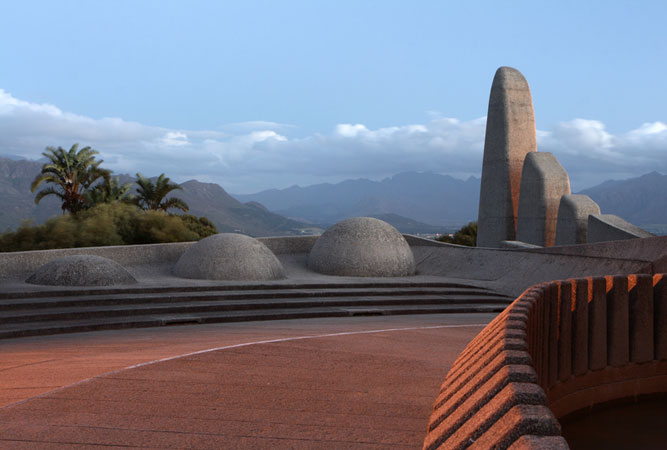 The Purple Shall Govern, Cape Town

This third Sunday Times memorial commemorates the ‘Purple March’ of 1989, when anti-apartheid protesters marched on Parliament and were stopped by police just near the corners of Burg and Church Streets. Artist Conrad Botes has designed a two-sided memorial. One surface features purple portaits of people who defied the state of emergency by taking part in the protest, the other is an illustration of a casspir surrounded by items protesters would have carried.

Protesters undertook an impromptu sit-in and police used tear gas, batons and water laced with purple dye to stain demonstrators, making it easier to identify them. In the chaos, one demonstrator climbed up to the cannon and turned the purple jet on police. The following day graffiti all over the city proclaimed: ‘The Purple Shall Govern’.

The end of the first World War saw the erection of an angel, a statue crafted by HC Fehr, as a harbinger of peace. Her imposing bronze figure mounted high on a pedestal in Graaff-Reinet, in one outstretched hand a sword, and in the other an olive wreath, her wings and dress swept behind her as if by a slight wind, is a magnificent guardian and timeless representation of reconciliation. 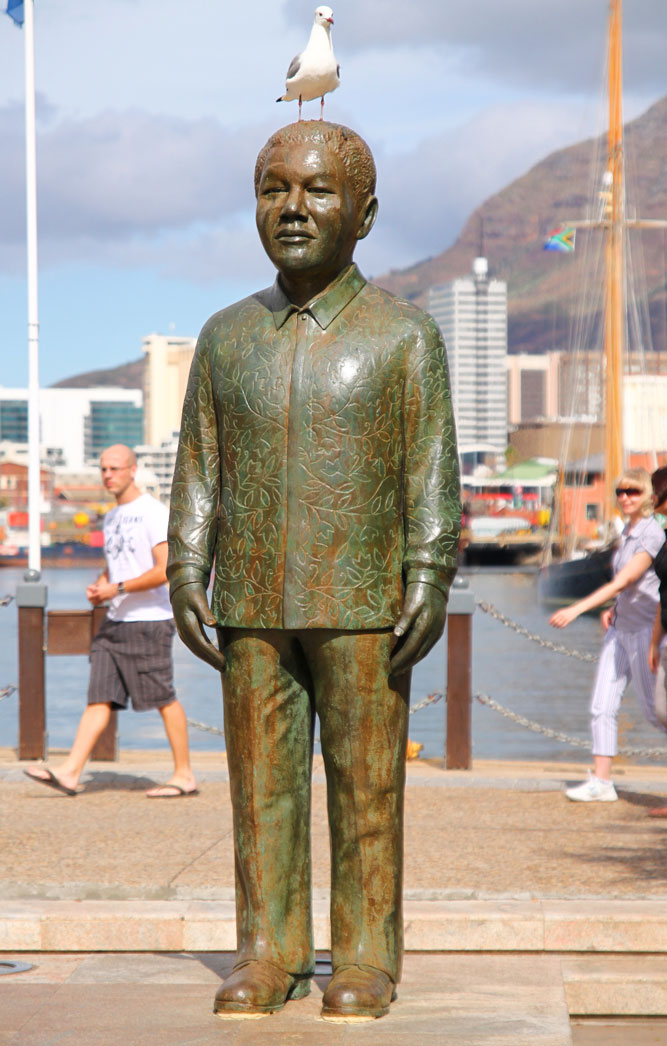