These 3 South African Decorative Arts, practised Only in South Africa, are Now Famous ~ Aside from San Rock Art, which is enjoying a resurgence since South Africa became such a hot tourist destination, many indigenous South African decorative arts have been lost as a result of the suppression of rural culture by former apartheid policies.

But more recently South Africa’s born-free generation – people like Laduma Ngxokolo with his knitwear designs based on Xhosa beadwork – have given South African decorative art a rejuvenation, placing it firmly at the forefront of innovative art.

“There is a re-birth in South African decorative arts.”

These 3 Decorative Arts, practised Only in South Africa, are Now Famous … 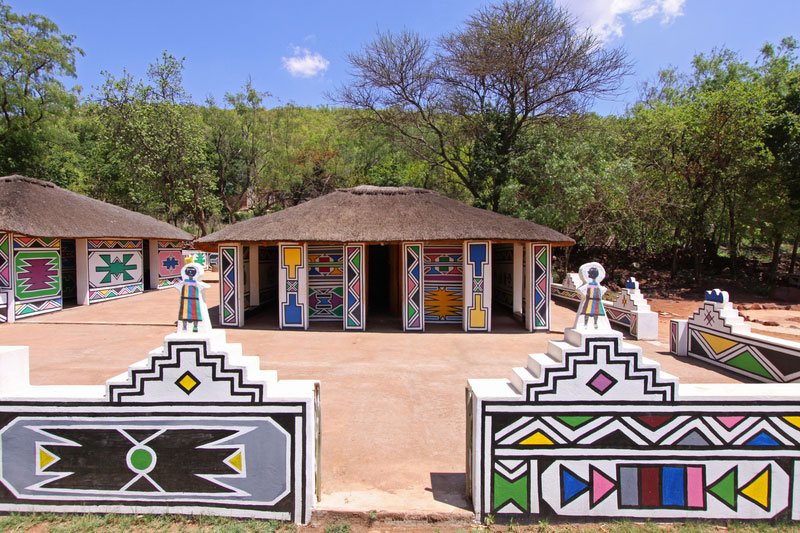 In the north east of South Africa the Ndebeles have been decorating their mud houses in bright, geometric designs since they can remember.

The Ndebele’s decorative house painting is vivid and enticing; you want to own it in some way…

This decorative home painting is the work of Ndebele women.

And is a tradition and style passed from generation to generation – the original patterns a ritual to announce events like weddings, deaths or initiations.

Esther Mahlangu is a household name. She might be in her 80s, but the artist continues to live in her own energetically decorated Ndebele house in Middelburg, Mpumalanga.

She makes a point of wearing traditional Ndebele dress – thick beaded necklaces, gold bangles, ankle bracelets, and patterned head jewellery – the Ndebele beadwork on which the house painting is based.

The Ndebele house patterns echo their beadwork in paint.

Esther’s fame was earned by her very distinct style of Ndebele patterns. She began experimenting with painting on canvas and board, using acrylics and the patterns and colour that the Ndebele started using in the 1940s when acrylics became available. 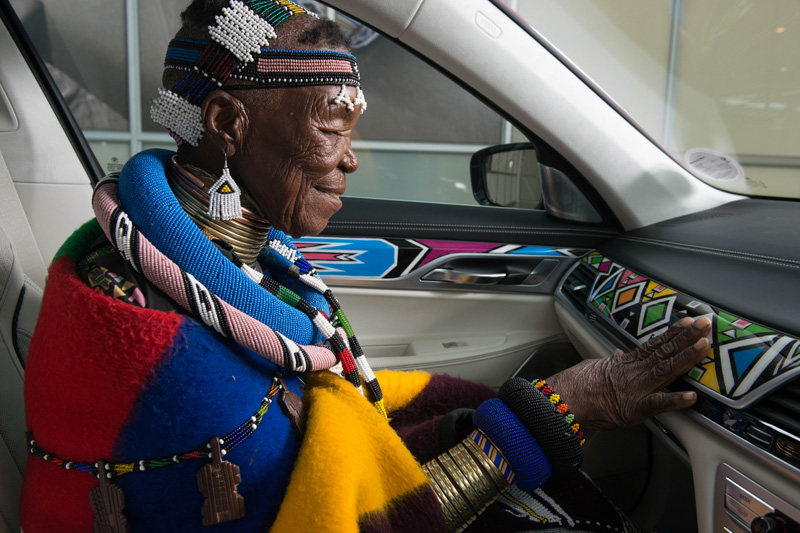 She is best known for her work with BMW. The company commissioned her to design the bodywork in her signature Ndebele-influenced shapes of the 12th Art Car (the first signed by a woman) in 1991. More recently she designed the inner panels of the 2016 BMW Individual 7 Series.

Where to see Esther Mahlangu’s work

Where to see Ndebele decorative art

For almost 200 years beadwork has been one of the major forms of expression for the people of southern Africa, particularly the Xhosa.

You know their beadwork, even if you think you don’t, as Nelson Mandela arrived at his 1962 trial in traditional Thembu royal costume with an exquisite Xhosa beaded collar.

It was during the early 1800s that traders first brought glass beads to Africa, where they were eagerly taken up by the Xhosa people, who would already have been making ornaments out of more natural elements like clay and shells. 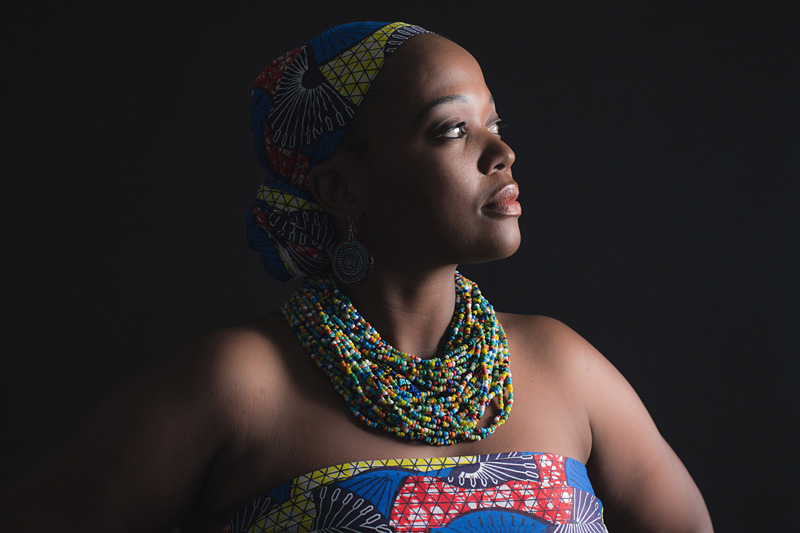 And the collars, the likes of which Mandela wore, are rare and valuable and would have taken weeks to make.

Laduma Ngxokolo’s knitwear designs are gracing the cat walks of Europe and winning countless awards (in 2017 he was honoured at New York’s Museum of Modern Art .

What makes the designer knitwear so special for South Africans, is that they’re inspired by traditional Xhosa beadwork.

Laduma, who hails from Kwadwesi township just outside Port Elizabeth, originally aimed his knitwear at Xhosa initiates, having gone through the traditional circumcision and initiation into manhood himself. His aim was to design something using mohair and wool, suitable for the amakrwala (Xhosa initiates) to wear as traditional dress.

You know you’ve made it when you’re commissioned by Chivas Regal to design a limited edition packaging.

Today it’s the likes of Chivas Regal who ask for his designs, as he joins the ranks of Vivien Westwood and Alexander McQueen, both past designers.

His black and white shawl won the 2016 Design Indaba Most Beautiful Object in South Africa.

All the raw materials Laduma uses in his designs are sourced locally from his home, the Eastern Cape. 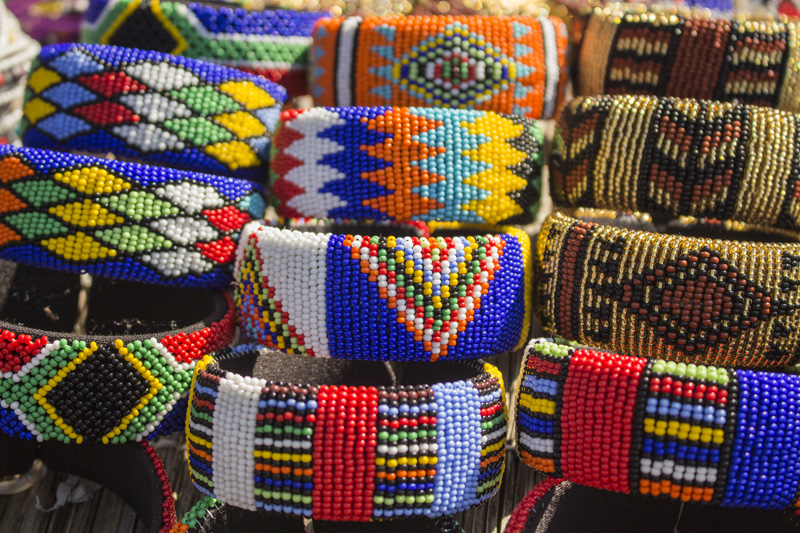 Where to see Xhosa beadwork

It’s been called both the ‘denim’ and the ‘tartan’ of South Africa, and you can tell it’s the real thing by its starchy smell and its trademark backstamp.

It’s not exclusively South African as shweshwe fabric is used in much traditional sub-Saharan African dress.

But South Africans are not shy to call the fabric theirs, nor do they hesitate to reinvent it. The name comes from the Sotho king – Moshoeshoe – who originally received the gift of indigo printed cloth from French missionaries back in the 1840s.

Now sheshwe’s a standard for traditional outfits, and the star fabric of the Afro chic movement.

Like Laduma, the new South African generation has taken shweshwe and fashioned it into something new. It’s used for everything from wedding dresses to hot boxes and pencil cases. But no example is quite as authentic as Siwa Mgoboza’s textile art. 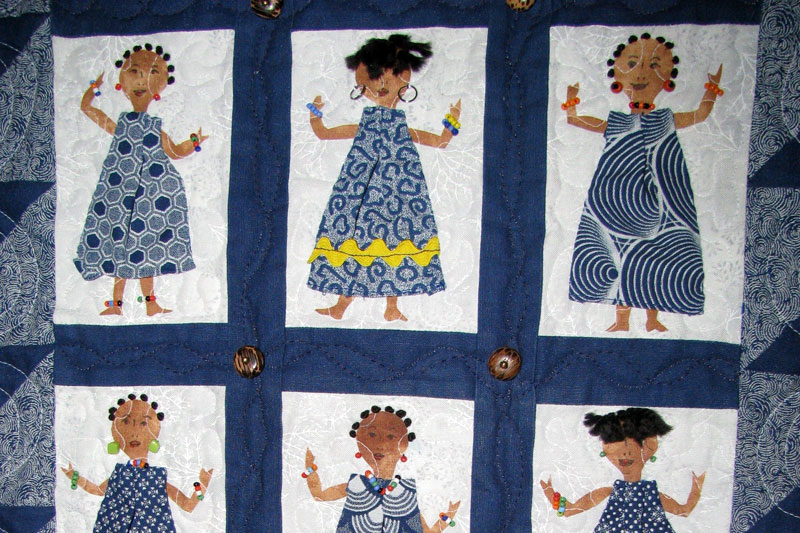 Siwa, who hails from Cape Town, makes extensive use of shweshwe in his collages.

Siwa Mgoboza transforms and renews sheshwe for use in his  multidisciplinary art – exhibited all over the world.

His work is a mix of shweshwe cloth, photography, sculpture and textile work.

He presents his work within a framework he calls the Africadian dimension – a world that transcends South Africa’s preconceived ideas of gender, race, religion, class and nationality.

His work explores a utopia where absolutes become fluid and are open to debate.

Where to see Mgoboza’s work

Where to see shweshwe

Just about anywhere in South Africa. Most arts and crafts shops and markets will have something made from the popular fabric. 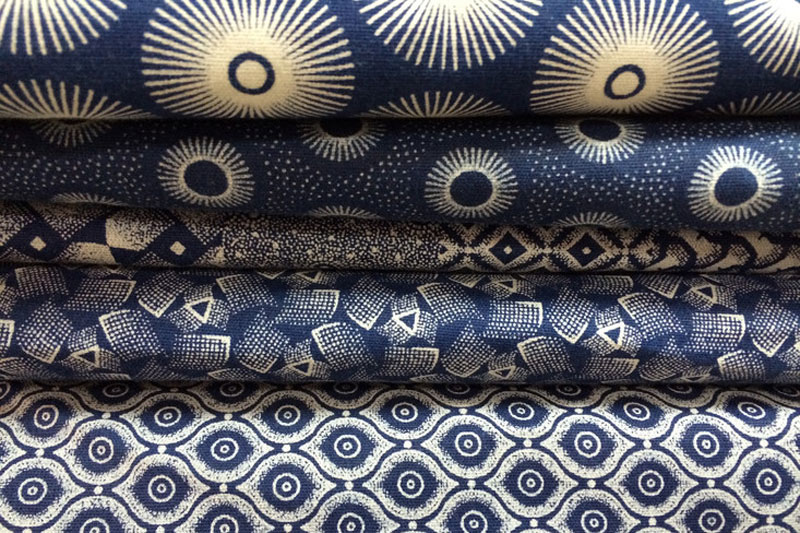