Now reading: Head To Stellenbosch For A Downton Abbey Experience

Just as the Crawleys of Downton Abbey (the impressive Highclere Castle in Berkshire, England) decided to open their doors to the public for a day, so too four historical homesteads of Stellenbosch (if on a somewhat less grandiose scale) combine to form the Village Museum, their doors open for daily tours.

It’s been here on the banks of the Eerste River since it was established by the Cape governor, Simon van der Stel. Back then it was an island known as Wildebosch (Wild Forest) that functioned as one of the cattle outposts of the Dutch East India Company (VOC). It was just time before he renamed it Stel’s Forest – Stellenbosch…

To this valley came a group of free burghers, sent here to farm so as to supplement cereal production at the Cape and contribute towards stocking ships. It wasn’t long before the orderliness and stately architecture of the Dutch was implemented by the visiting VOC Commissioner, and a House of Justice, a mill, a church, a cemetery and houses began to gently appear on the edge of wide tree-lined streets. 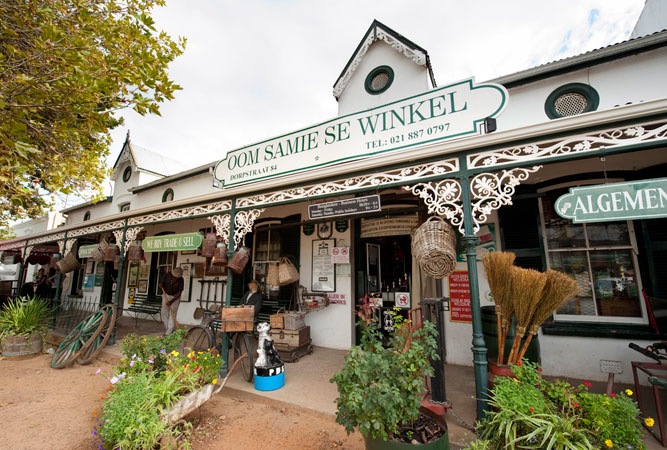 Stellenbosch evolved into the first European village in South Africa’s interior. Despite three major fires (1710, 1803 and 1875) many of the beautiful period buildings, now with corrugated iron roofs as opposed to thatch, remain preserved for posterity.

Whilst the original Stellenbosch manors are no longer residences the way that Highclere Castle functions as a domicile for the Earl and Countess of Carnarvon (who, by the way, open their doors for 60 to 70 days of the year for tours, charity events, concerts and country fairs), their interest for the visitor is no less engaging.

Stellenbosch is also attractive to film crews – the American television series Of Kings and Prophets was shot just outside town (admittedly cancelled after only two episodes, but that’s hardly due to the location).

Town hums on a daily basis. Restaurants buzz, traffic jostles for parking, and every part of town is like an advert for the ultimate country winelands lifestyle.

Head to Stellenbosch for a Downton Abbey experience and do the Historical Stellenbosch on Foot (designed by Stellenbosch Tourism, in Market Street). This walk centres on the top end of Dorp and Church Streets, including the four fine homes of the Village Museum.

Whilst no one homestead is quite the dimensions of Downton Abbey, the principle is the same, and the graceful Cape Dutch architecture, extraordinary. You can expect period furniture, wallpaper and guides in period costume.

The Village Museum is only part of the route. There are many other buildings of historical merit in the area. We did the walk recently and give you the highlights. 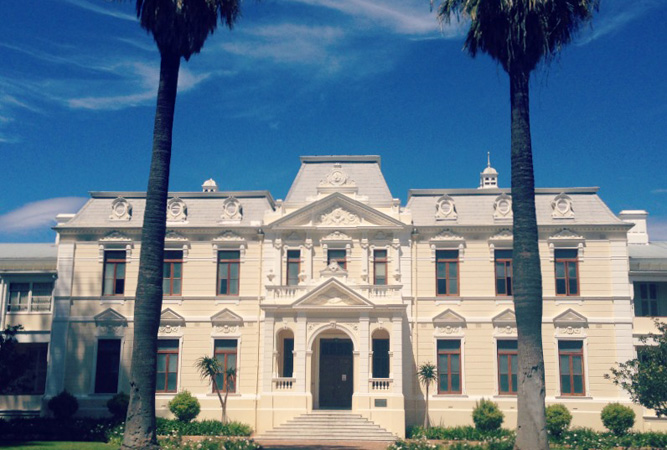 HIGHLIGHTS OF HISTORICAL STELLENBOSCH ON FOOT:

The Theological Seminary, cnr of Drostdy and Dorp Streets

This is the most historical site in town because it represents the island called Stellenbosch of 1679. The northern watercourse of the Eerste River was filled in subsequent to a devastating flood in 1768. On this site several Drostdys have stood, serving as courtroom or home for the magistrate. After being donated to the Dutch Reformed Church it became a seminary, in 1859, but the present incarnation of the building dates to 1905. Take note of the cast-iron fence right around the property, and the huge Norfolk Island pine, a national champion tree. 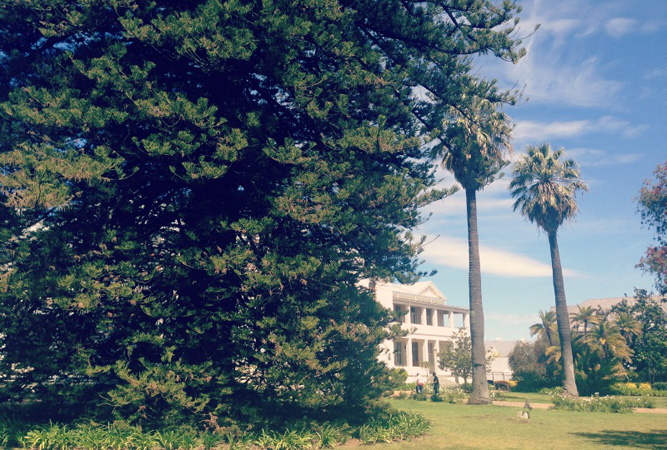 Photograph: Champion Tree – The Norfolk Pine at the Theological Seminary

You can’t miss this gorgeous neo-Gothic building with its tall spire. It’s one of the most photogenic buildings in Stellenbosch, if you can fit the spire into your camera’s window. The church originally had a thatched-roof church with a cross floor plan, but the perimeter stone wall of 1735 is still largely intact. The present building is the combined effort of Rev Jan Neethling and the German architect, Carl Otto Hager who was also responsible for other buildings in town, like the Theological Seminary (above), the Lutheran Church on the corner of Dorp and Bird Streets, and The Oaks (De Eiken) on Market Street. 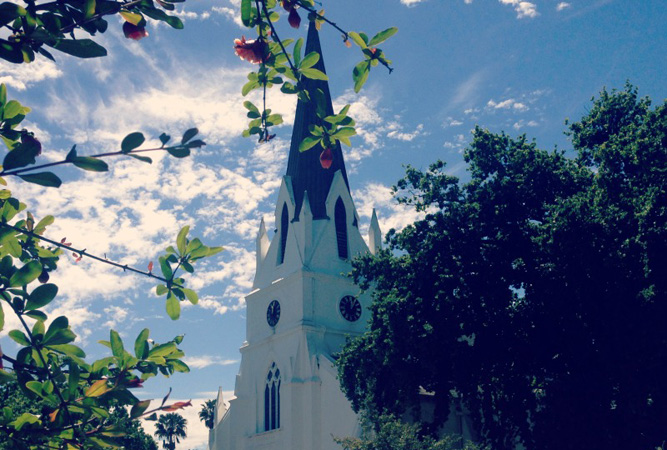 Named after the initial occupant of the house, the deputy bailiff Olof Bergh, the house was originally an H-plan house from the late 18th century, but was later adapted into a double-storey with a wide gable.

It’s a museum today and worth visiting for the wall-papered interior, typical of the Cape Victorian middle-class. 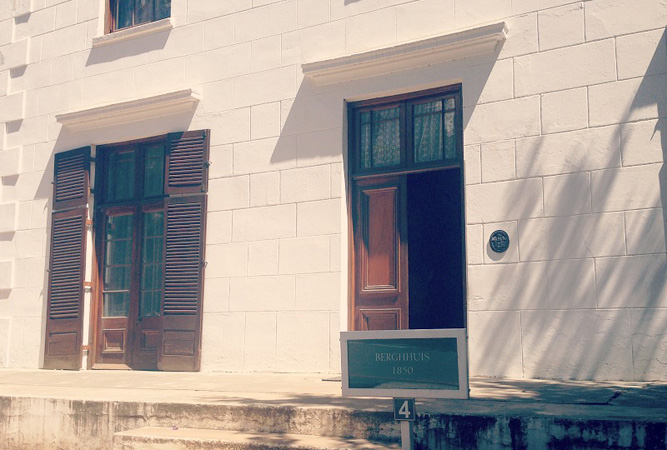 This is the only remaining H-plan, Double-storey Cape house in Stellenbosch. And one of the only buildings not painted white, but a sombre cream. Its small-pane sash-windows are also worth noting.

It forms part of the Village Museum, despite being over the way from the other three, its green marbled walls restored in the painted finish that was so fashionable during the early 19th century. It’s worth visiting for the British period furniture and paintings. 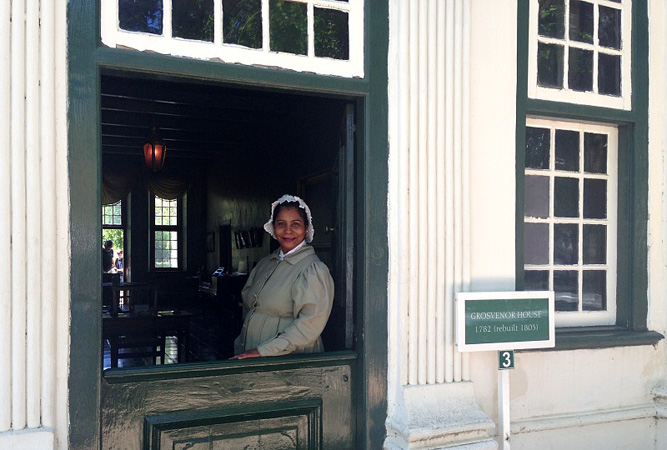 This open-air museum contains four undisturbed dwellings side-by-side and their gardens, representing the four main periods of colonial homes at the Cape. The houses – Schreuderhuis (1709, one of few to survive the first fire in Stellenbosch and the oldest documented town house in the country), Blettermanhuis (1789, a typical 18th century Cape style with 6 gables and the H shaped ground plan), Grosvenor House (1782, an outstanding example of a two-storey, flat-roofed patrician townhouse) and Om Bergh (1850s typical home, all paper and accessories still intact).

It’s wonderful to be able to wander through their restored interiors and gardens.

There are over 70 historical buildings and sites on the Historical Stellenbosch on Foot route. 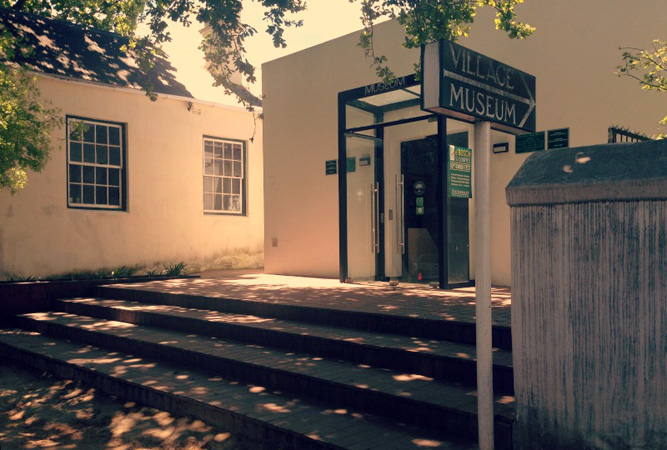 You can do the route in a couple of ways:

1) The Self-guided Tour – pick up your copy of the pamphlet Historical Stellenbosch on Foot from Tourist Information at 36 Market Street, for just R10, and design your own route

2) The twice daily, Stellenbosch on Foot guided tour of Stellenbosch for R120, leaving Tourist Information at 11h00 and 15h00

4). Find and book Stellenbosch accommodation here. There are plenty of excellent hotels, Bed & Breakfasts and self catering apartments available in the area.

5). Chat to Tourist Information as there are other tour options as well – Twilight and Ghost Walks, for instance.

We’ve pulled out all the stops to find you best value, luxury Western Cape Accommodation, including some of our best places to stay in Cape Town. Most of these options are self-catered, giving you the privacy and magnificence of a house all your own, with v...