Vertical slabs of rocky layers echo against one hairpin bend after the next as the road to hell zigzags below and disappears into the distance. Millions of years ago these mountains were a seabed, a century ago this road did not exist, but now there are creases to your left, folds to your right and peaks towering above while sheer drops grab the absence of your acrophobia into trembling existence.

A klipspringer surefootedly leaps down while the wind tickles pink proteas into a silent sway; the phone has given up its quest for signal and isolation sets in as you meander and manoeuvre along the dramatic Swartberg Mountain roads into Gamkaskloof, one of South Africa’s most fascinating once-upon-a-time settlements.

Rugged, remote and resilient is one way to describe Gamkaskloof, better known as Die Hel (the Hell).

Gamkaskloof is situated in a narrow isolated valley in the Swartberg Nature Reserve between the towns of Oudtshoorn and Prince Albert and for off-road enthusiasts it is a journey to tick off their must-drive lists as it brings great pride and bragging rights to slap a ‘I’ve been to hell and back’ badge of honour sticker on the back of a vehicle.

But Gamkaskloof is anything but hell, it’s a heavenly haven of geology, nature, peace, and kloof stories and the road – despite its gnarly bends, twists, turns and those steep descends into the valley below – will even be sympathetic towards a 4×2 and a non-4×4 with a descent ground clearance. 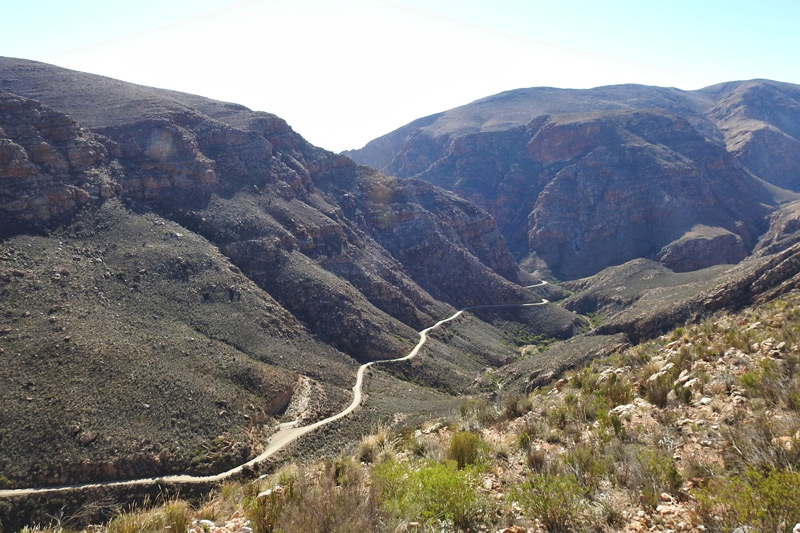 There is no cell phone reception, no electricity, no fuel, no ATM and card facilities, no public phone and no internet.

But what might seem like a lack of modern day needs and amenities are an opportunity for visitors to switch off, get closer to the earth, tap into simpler times, sit around fires and sample locally distilled witblits while listening to the tales of yesterday – passionately told by the last real ‘klowers’ of Gamkaskloof, the Joubert family – is the order of the day. 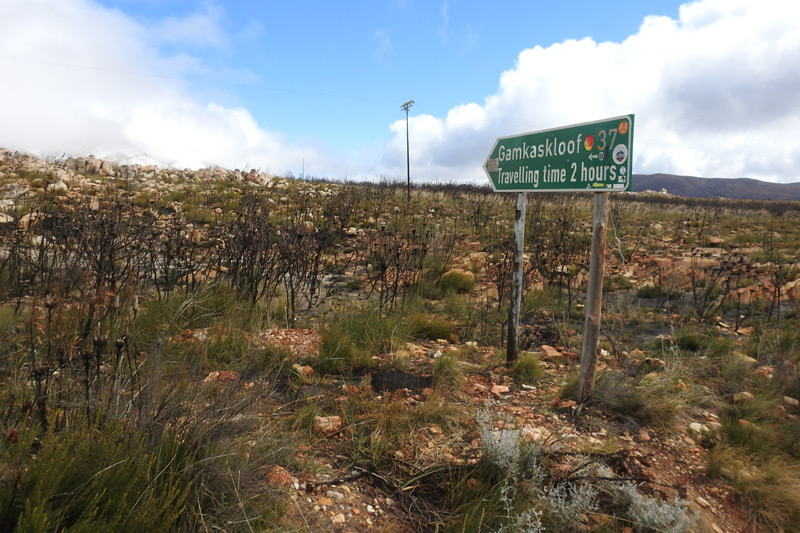 The earliest inhabitants the kloof were the San Bushmen, and around 1830 the first farmer arrived in the valley and decided to call it home due to area’s fertile nature and abundance of water. Over the years more families followed, a school was erected for the children and it also served as a church. Up until 1962 – before the road into the kloof saw the light of day – the best way (and worst at most times) in and out of isolation was via the Gamka gorge’s dangerous nail-biting 20 km cliff path that got nicknamed, ‘The Ladder’.

For the outside world, in the middle of the 1900s, the Gamkaskloof community remained a mystery of seclusion and curious explorers often preserved the treacherous terrain to find out if what they heard were true. In fact it was through this infamous route that a 1938 Morris made its way into the kloof when a few men carried the car over boulders, through rivers and down the valley in 1958. At the time of the Morris’ arrival, donkeys were the only mode of transportation used by the kloof’s inhabitants and the little or no contact with civilisation resulted in a few terrified screams; children ran in all directions when the rumble of the engine was heard for the  first time. 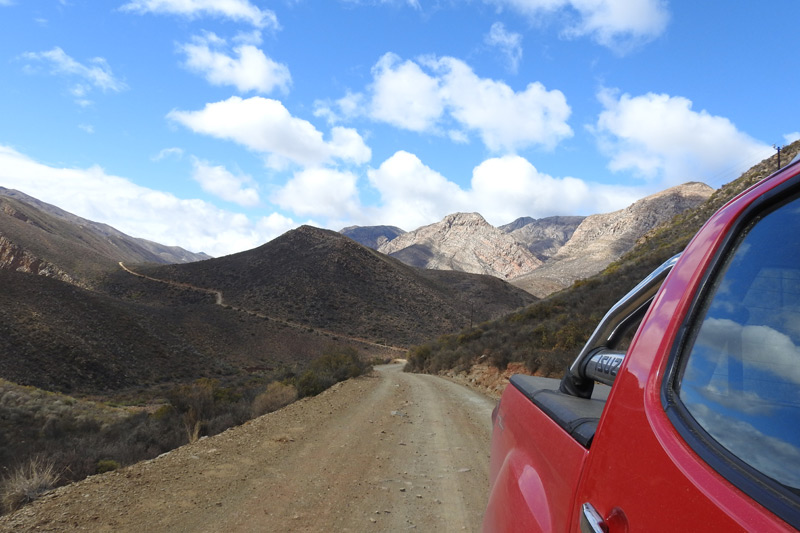 Today the sound of off-road bikes and 4x4s are no cause for alarm or fear, in fact it has become synonymous with Gamkaskloof. And while the outside world is a short trip away for those living in the kloof, the history and way of living in Gamkaskloof still remains a mystery to be discovered for travellers, for us all, for the outside world.

It is a mystery wrapped up in bushmen paintings, in old houses that were restored, in the stories of yesteryear told by the Joubert family, in the 37 km of road and in the leopards still roaming the mountains.

It is a mystery wrapped up in the name, Die Hel, a heavenly haven of geology, nature, peace, and kloof stories. 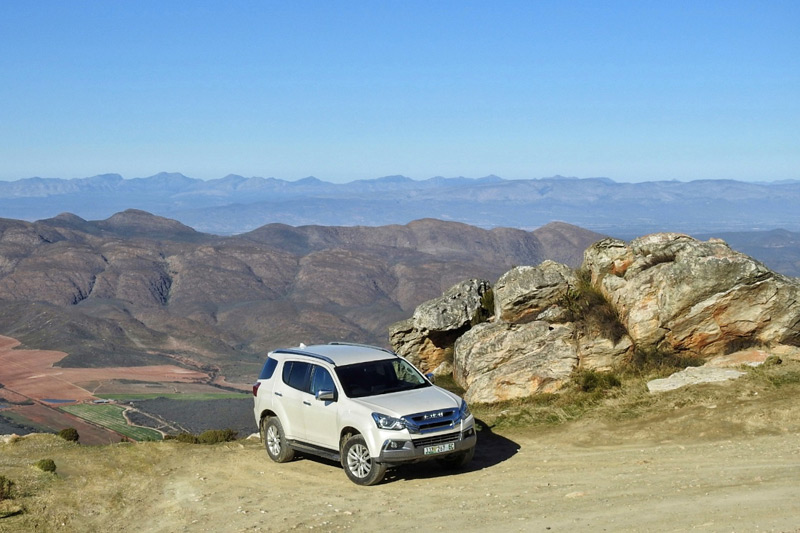 Gamkaskloof: Know before you go

Gamkaskloof can only be accessed via the Swartberg Pass; it is 93 km from Oudtshoorn and 57 km from Prince Albert. There is one restaurant (lunch and dinner should be organised in advance), and the shop sells a few basics such as cold drinks, beer, snacks and homemade jams and more.

Keep in mind, there is no cell phone reception, no electricity, no fuel, no ATM and card facilities, no public phone and no internet. 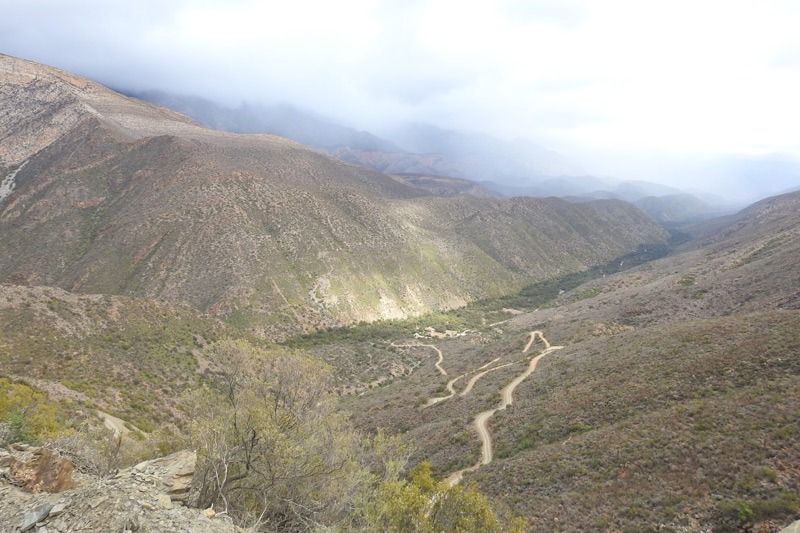 The world’s ostrich capital offers visitors much more than just fashionable feathers. Oudtshoorn in the Klein Karoo plays host to one of the biggest arts festivals in the country and apart from historic sites such as the Cango Caves, you can also go on meerkat safaris, try ziplining, taste olives at Surval Boutique Olive Estate, try local craft gin (and wine, mampoer and liqueur) at Grundheim, go wine-tasting at Karusa Vineyars and Wines.

There are numerous hiking trails to explore in the Swartberg Mountains, you can go stargazing and explore a bit further to the small town of De Rust and stop for dip and a plunge at Meiringspoort and Rust-en-Vrede waterfalls.

Book your accommodation in Oudtshoorn – options range from guest houses to self-catering options. 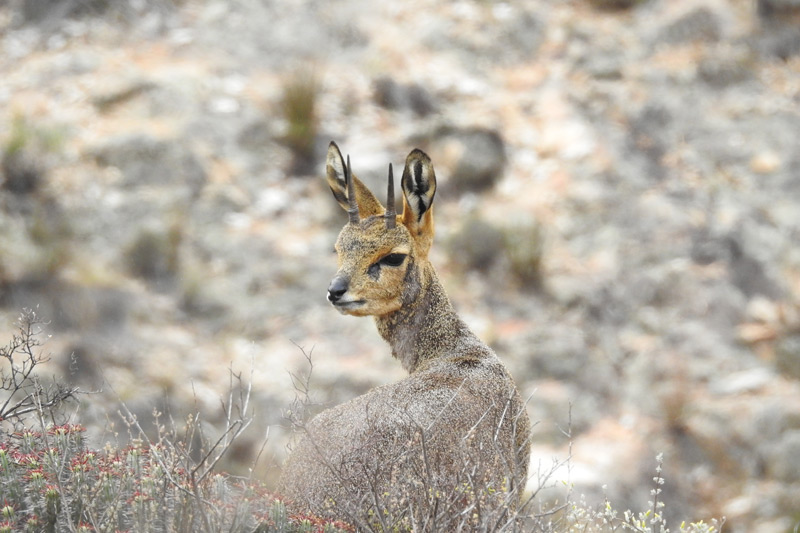 The charming Karoo village of Prince Albert is known for its quaintness roaming the streets, and can easily forget about time as you find yourself taking photos of dustbin art, admiring unique Karoo architecture, sampling local figs and cheese, watching a performance at the Showroom Theatre and dining at unique eateries with lazy blue-eyed cats stretched out next to you.

Sounds like a small town worth visiting?  Book your accommodation in Prince Albert and get ready to explore.

And if the Karoo is tugging on your heartstrings, why not extend your trip by adding De Rust to your itinerary for an Oudtshoorn-Gamkaskloof-Prince Albert-De Rust round trip.