Ron McGregor is one of South Africa’s most experienced tour guides. Over many years, thousands of visitors have enjoyed his commentaries and gained through them a greater insight into the story of South Africa and its people. Very informative and entertaining, The South African Story is a collection of these commentaries written in Ron’s trademark style. It covers history and legend, geography and climate, people and politics and much more besides. It is the ideal introduction to this fascinating country! 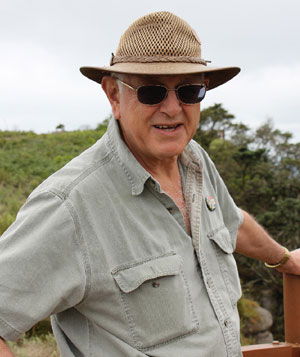 With over forty years of experience, Ron McGregor has established himself as one of South Africa’s most senior tourist guides.  It’s hard to think of any other book that combines such a wide variety of topics in a single volume. Broadly speaking, the chapters are arranged so that they follow the most popular route for first-time visitors. That is, overland from Cape Town to Port Elizabeth, and then from Durban to Johannesburg via Zululand, Swaziland, the Kruger National Park and the Mpumulanga Drakensberg.

For those venturing further afield, there are also commentaries on areas like the 1820 Settler country around Grahamstown, the battlefields of Natal and Zululand, and the semi-desert of Namaqualand, famous for its massed wildflower displays in August and September.

There are brief histories of famous people – Smuts, Churchill, Kruger, Rhodes, Nelson Mandela, and more. Broader topics include the Great Trek, the two Anglo-Boer Wars, Apartheid and Liberation. Where appropriate, the chapters are accompanied by maps and diagrams to enhance the reader’s understanding. There are also appendices which describe what we eat and drink, and what we mean when we speak of places like Border, Berg and Bushmanland.

Originally written for the independent traveller who doesn’t have a guide to tell the tales and answer questions, The South African Story will also be invaluable to those who wish to qualify as tourist guides, and very useful to ordinary South Africans who simply want to learn more about their own country.

In 1968, Ron McGregor – then a student of English at Wits University – accepted a three day vacation job driving tourists to the Kruger National Park. When it was over, he collected his pay – all fifteen rand of it, and went home. The next day, the touring company called him with an offer of another tour, and what was a three day vacation job turned into a career spanning more than forty years over six decades. Now established as one of South Africa’s foremost tour guides, there are few places Ron hasn’t visited, few roads he hasn’t travelled, and few tales he hasn’t heard.

Apart from touring, he has always loved writing. He is a prolific contributor to the letters columns of our newspapers, and has published a number of short stories. A few novels are lurking in the wings, but touring is a full-time profession, so these may have to wait until retirement. Until then, readers may enjoy his raconteurial style in his first published volume, The South African Story. 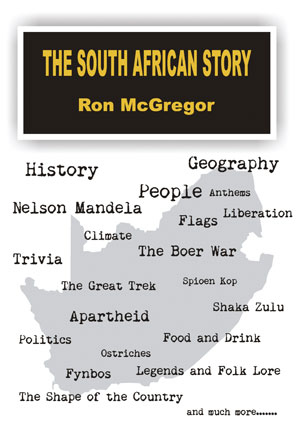 Adderley Street – When the British took over at the Cape, they inherited a lot of Dutch place and street names. They changed a few, but left many intact. The four streets which marked the boundaries of the original settlement – still in use today – still have their original Dutch names: Buitenkant, Buitensingel, Buitengracht and Waterkant. The main street of the city was Heerengracht, after its namesake in Amsterdam. It was a very short thoroughfare, running from the Gardens down to Strand Street, where the sea began. (See Chapter 9 to find out what happened to the sea, for it is certainly no longer there!).

The English are famous for being unilingual. English is so universal that you don’t really need to speak another language. As a result, the English often battle with exotic words. And Heerengracht, if properly enunciated, is quite a mouthful! (Try hear-un- ggghrruggght!) But they lived with it, until there occurred an incident that provided a sufficiently worthy new name. Britain, in earlier times, used to rid itself of law-breakers by transporting them to Australia for offences both great and small. In 1849, it was decided to send a shipload of convicts to the Cape. They were to be employed on the building of a badly needed breakwater, and then released. The normally placid citizens of Cape Town were outraged. “Over our dead bodies!” they cried, or words to that effect.

But the Cape was a colony, ruled from London. The citizens had no voice in their own affairs. In September 1849 the Neptune, with nearly 300 convicts aboard, dropped anchor at Simon’s Town. The populace promptly cut off all supplies to the administration – and to the ship. The unhappy convicts – along with the crew – faced the grim prospect of starvation for as long as the crisis continued. Back in London, Parliament reopened the debate on the subject.

Initially, the argument went against the colony. It was the opinion of Her Majesty’s Government that the colonists were an insolent lot, and had no right to tell the government of the mother country what it might or might not do. But then a certain Charles Adderley, MP, entered the debate. Transportation of convicts, he said, was a wicked thing generally. It was bad enough that Australia was forced to accept them; on no account should the practice be extended to the Cape as well.

Adderley must have been a fine speaker. By the end of his address, Parliament was persuaded. The Neptune was ordered to sail on to Australia and dump the convicts there. (This event also heralded the beginning of the end of the policy of transportation, so it was not only Cape Town that benefited from the eloquence of Mr Adderley.) The crisis was over, and the citizens of Cape Town thought there was no finer way to thank Adderley than by renaming the main street after him. So Adderley Street it became, and remains to this day.

Deserving as the cause may have been, it is always sad to lose a piece of history. But, a century later, an opportunity arose to bring back the name Heerengracht without losing Adderley Street. In the 1950’s, after the Foreshore had been reclaimed from the sea (see Chapter 9), Adderley Street had to be extended to reach the new harbour. This extension, which you will note is a much newer and wider thoroughfare, was given the honoured old name of Heerengracht.

In 2000, there took place an ill-advised attempt to rename Adderley and Wale Streets after Nelson Mandela and F W de Klerk. A public outcry resulted, and the event was at least partly responsible for the city’s decision that it was time for a new mayor. The citizens of Cape Town would be very pleased to have a street named for Nelson Mandela, but it will have to be some other street, because Adderley Street is part of history.

Walking on the Wildside by Pat Dewil – a Book Review

Pat Dewil is an enthusiastic conservationist and professional wildlife ranger and guide and a very accomplished story teller. You will get to know him through the countless tales of his exploits and adventures in his book – Walking on the Wildside. He travels ...

This groundbreaking book is a world first, depicting the Great White Sharks which dominate the False Bay area and present a unique hunting behaviour of breaching during predatory events – and is the only book of its kind in print. It is soon to be a South Afri...

Now this feels like Home by Gail Masondo – book review

Now, This feels like Home is a treasure of a book - offering an honest account of Gail’s life experiences, a memoir with a difference. It takes on the familiar sensations of loss, fear, sadness and regret. We have all experienced these and while reading Gail’s...