Now reading: Walking on the Wildside by Pat Dewil – a Book Review

Pat Dewil is an enthusiastic conservationist and professional wildlife ranger and guide and a very accomplished story teller. You will get to know him through the countless tales of his exploits and adventures in his book – Walking on the Wildside. He travels throughout Africa, through the bush and over the Serengeti. His travels take him to Mana Pools, Victoria Falls and the great Zambezi River. His photography captures Africa and there are some images of scary moments and funny instances. You don’t have to be a safari-nut to really enjoy this book. 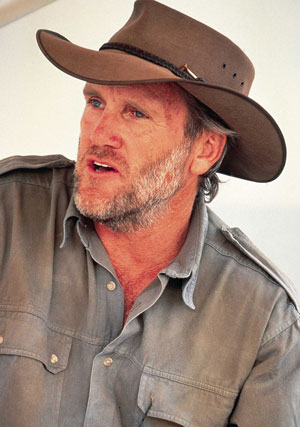 In this book, Pat Dewil generously shares his enthusiasm in a very personable way and it’s impossible not to get caught up in the excitement of one of Pat’s safari adventures, whether it’s canoeing down the Zambezi River, breathlessly watching gorillas in Rwanda or marvelling at the Serengeti wildebeest migration with travellers from across the world. “Walking on the Wild Side” is both a serious and an amusing story of an unusual life adventure.

Professional wildlife guide and ranger, passionate conservationist and student of African politics, Pat Dewil has seen and done lots since he left the corporate world behind over 25 years ago and set off into unknown territory, into the wilds of Africa.  This is a story of his adventures and safaris in Namibia, Tanzania, Uganda, Zambia, Zimbabwe, Rwanda, [link_sa]South Africa[/link_sa], Botswana, Madagascar, Cameroon and the Central Africa Republic.

There are poignant anecdotes about the interesting people and animals he’s met along the way. He has had many wonderful escapades, some hilarious and some life threatening. And his telling of these tales is compelling. Countless experiences have given him a wide and insightful knowledge of the day to day workings of this intriguing continent, and his astute observations on African politics and culture and his deep involvement in conservation have made him a highly sought-after Safari Guide. 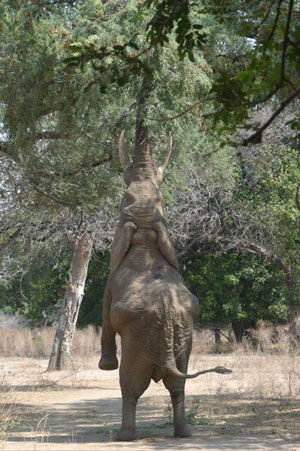 Benji hated baboons. For some reason, he’d just get a hint that they were around and he’d go crazy. If they were chattering in trees around him – they often came in to our garden looking for wild fruit  – he would go almost demented, chasing from tree to tree, while the older baboons nonchalantly gazed at him and the youngsters screamed and taunted him from above. He would eventually almost run himself into the ground and I’d have to lock him inside the house until the baboons left town.

Now, next to lions, baboons have the longest canine teeth of all the mammals in Africa. Male baboons are fearsome defenders of the troop from predators. Leopards seldom attempt to attack a baboon that is part of a troop. Stragglers, the weak and lame left behind, when the troop moved on, were the only real chances a leopard had of snacking on a baboon. Even lions were wary about attacking baboons and only lion numbers, or the presence of a big male in the pride, would allow them to be their normal nonchalant selves when near baboons.

Early morning and we were running along the one and only tar road through Kariba. This was quite unusual, but I think we’d decided that it would be a change from running along elephant tracks. We must have been about four miles from home, when Benji spotted a big troop of baboons in a wide open area, about a hundred yards from the road.

Benji took after the baboons before I could get voice-control of him. When the baboons saw him coming, they ran behind a small rise and I lost sight of them and their tormentor. Then World War Three broke out behind the rise. It sounded like there’d be no survivors with Benji frantically barking, young baboons screaming, as only young baboons can, and the big males barking very aggressively. 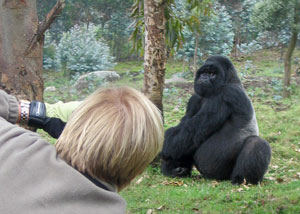 I ran towards the commotion, but when the baboons on the periphery of the chaos saw me, they took off and then so did the rest, with Benji on their heels, again out of sight. After an exhausting chase through the bush, I got close enough to the centre of the tempest, to shout persuasively enough to get Benji the Insane, under control.

He came running sheepishly towards me and I could see from a distance that the baboons had won the first round. His left ear was hanging from a sliver of flesh and blood was pumping from what was obviously a severed vein or artery. I know that humans, and dogs too, I suppose, have a major supply of blood running to the ears.

Benji’s ear was history. The blood was shooting at least three feet from the side of his head and he, in his normal way, was totally unperturbed. My heart dropped. Four miles from home, the bloody dog leaking blood at a thousand gallons a minute and, at this time of morning, not a car nor human in sight.

I pulled off my T-shirt and wrapped it around Benji’s head, to stem the flow. He looked at me as though I’d gone a bit crazy but patiently stood while I bandaged him up. Then I picked him up and started the long walk home. The look on Benji’s face was, I’m convinced, one of quiet resignation.

“If my dumb master wants to carry me, well I suppose I’ll go along for the ride.” For a while at least. Bull terriers are not big dogs but after a few hundred yards, I realized that there was no way I was going to carry Benji all the way home. I put him down, he wagged his tail and looked at me with this now blood red T-shirt absurdly wound around his head and trotted off down the road, looking back to make sure that I was up to finishing the rest of the run home.

He was totally unconcerned. Eventually we reached home. Me ready to drop, Benji wagging his tail and ready for more, if I was up for it.

I managed to find a local Kariba resident, who’d been a medic in the bush war, and he sewed Benji’s ear back on. After that, because his left ear hung at half mast, he always had a look that seemed to say, “I’m interested but not really”.

How much blood he lost, I can’t begin to guess, but he never missed a beat and we ran the next day, Benji in front.

Almost a year later, we ran the same route and despite the searing sun and drenching rain, Benji’s bloodstains were still on the tar.
I loved that dog.