You are here / South Africa Travel News / Miscellaneous / Words of wisdom: 20 of the greatest Quotes by South Africans (including a selection by Mandela)

Now reading: Words of wisdom: 20 of the greatest Quotes by South Africans (including a selection by Mandela)

“I am an African. I owe my being to the hills and the valleys, the mountains and the glades, the rivers, the deserts, the trees, the flowers, the seas and the ever-changing seasons that define the face of our native land”

And whilst I would love to claim the above lines as mine they are, instead, those of a supreme orator, taken from one of the world’s most famous speeches ~ Thabo Mbeki’s “I am an African”.

Inspired by the incredible country in which they live, and the miraculous history from which they come, South Africans produce words of wisdom to inspire. For those wanting motivation to visit our shores, cast your eye downwards… 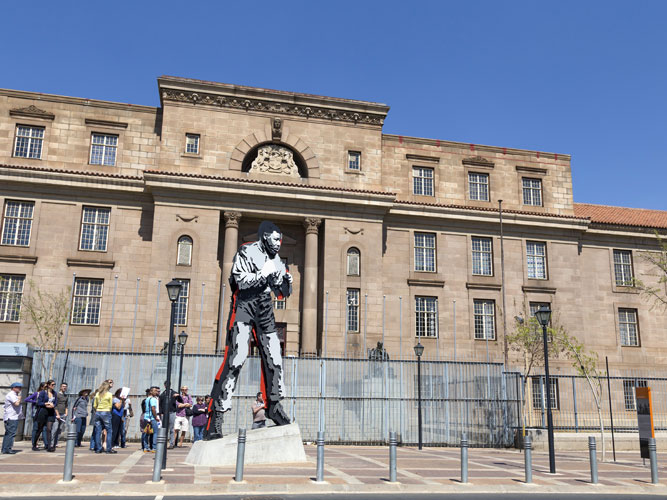 Photograph: Nelson Mandela statue resembling him as the Boxer in front of the Magistrates Court in Johannesburg.
The byline below the statue by Nelson Mandela says, “In the ring, rank age, colour, and wealth are irrelevant.”


20 of the greatest quotes by South Africans

People respond in accordance to how you relate to them. If you approach them on the basis of violence, that’s how they’ll react. But if you say, ‘We want peace, we want stability,’ we can then do a lot of things that will contribute towards the progress of our society. ~ Nelson Mandela

Your ordinary acts of love and hope point to the extraordinary promise that every human life is of inestimable value. ~ Desmond Tutu

When time and space and change converge, we find place. We arrive in Place when we resolve things. Place is peace of mind and understanding. Place is knowledge of self. Place is resolution. ~  Abdullah Ibrahim

For you in the West to hear the phrase ‘All men are created equal’ is to draw a yawn. For us, it’s a miracle. We’re starting out at rock bottom, man. But South Africa does have soul. ~ Athol Fugard

In dancing with the enemy one follows his steps even if counting under one’s breath. ~ Breyten Breytenbach

There is no passion to be found in playing small – in settling for a life that is less than the one you are capable of living. ~ Nelson Mandela

Whoever we may be, whatever our immediate interest, however much we carry baggage from our past, however much we have been caught by the fashion of cynicism and loss of faith in the capacity of the people, let us err today and say – nothing can stop us now! ~ Thabo Mbeki

South Africa is blessed to have women and men like yourselves who have little to give but give what you have with open hands and open hearts. ~ Mangosuthu Buthelezi

There is nothing like returning to a place that remains unchanged to find the ways in which you yourself have altered. ~ Nelson Mandela

South Africans have no concept of time and this is also why we can’t solve poverty and social problems…It’s now 10 years since the fall of the apartheid government and we cannot blame apartheid for being tardy. ~ Nelson Mandela

What I quickly discovered is that our so-called new South Africa has as much material for a story-teller as the old one. The landscape hasn’t really changed. Who is in power now is different to who was in power then, but the squatter camps grow like cancer, the rich get richer, the poor get poorer. ~ Athol Fugard

Power is something of which I am convinced there is no innocence this side of the womb. ~ Nadine Gordimer

We are not being arrogant or complacent when we say that our country, as a united nation, has never in its entire history, enjoyed such a confluence of encouraging possibilities. ~ Thabo Mbeki

The titanic effort that has brought liberation to South africa, and ensured the total liberation of Africa, constitutes an act of redemption for the black people of the world. ~ Nelson Mandela

Age is getting to know all the ways the world turns, so that if you cannot turn the world the way you want, you can at least get out of the way so you won’t get run over. ~ Miriam Makeba

I am not interested in picking up crumbs of compassion thrown from the table of someone who considers himself my master. I want the full menu of rights. ~ Desmond Tutu

Our daily deeds as ordinary South Africans must produce an actual South African reality that will reinforce humanity’s belief in justice, strenthen its confidence in the nobility of the human soul, and sustain all our hopes for a glorious life for all. ~ Nelson Mandela