Totalsports’ V&A Waterfront store was given the exclusive opportunity to become the first store in the world to sell the 2010 FIFA World Cup™ matchball produced by Adidas. The official 2010 World Cup matchball will be unveiled during the World Cup Draw at the Cape Town International Convention Centre on Friday evening (4th December).

At this event Adidas and Totalsports officials will unveil the giant ball (2 meters in diameter) outside the store at 8pm, followed by a symbolic delivery of the signed official ball by adidas ambassador, Lucas Radebe, who will be coming from the red carpet event at the CTICC. Lucas Radebe is expected to the signed ball at about 9pm … 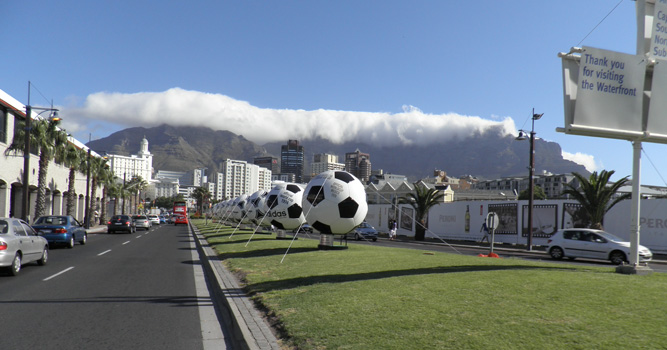 A historical ball set of all World Cup matchballs since 1970 is currently on display at the Waterfront. Adidas will also unveil the two giant matchballs at the entrance to the Waterfront and behind the Amphitheatre at 20h00 on Friday, just after the World Cup Draw. “The World Cup is a once in a lifetime opportunity for South Africans to shine and as adidas we want to show our commitment to this event by producing a ball that reflects who we are as South African’s,” adds Bradley Stern. The new matchball is expected to have a uniquely South African name and design.

Photographs of the historical ball set of all World Cup matchballs since 1970 currently on display: