Now reading: 6 Off The Beaten Track Towns In The Eastern Cape

South Africa is one of the best holiday destinations in Africa enjoying an ever-increasing number of tourists every year, who head to the glamorous coastal cities of Cape Town and Durban, and the cosmopolitan city of Johannesburg.

Away from these cities South Africa has dozens of little towns and villages. Many of them, particularly those in the Western Cape and Free State, have succumbed to a small town renaissance as an influx of artists and intellectuals restore their Victorian and Cape Dutch architecture and reinvigorate the towns with markets, wine estates, annual events, places to stay and tourist routes.

The inland region of the Eastern Cape finds itself lumped into a vague expanse described as the ‘binneland’ in Afrikaans. These uncharted parts of the Eastern Cape still needs discovering. The once beautiful towns have eluded the small town renaissance of other provinces. Left to languish as disillusioned farmers and people head to the larger cities for work, these dorps could find themselves described as ghost towns before long. 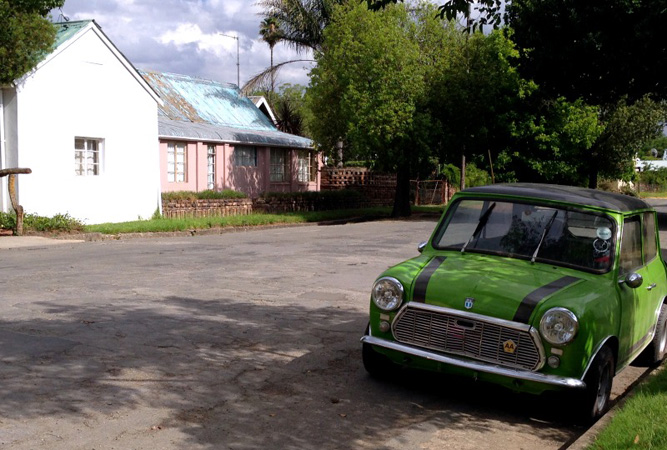 The Eastern Cape is the poorest province in the country. Its former white South Africa western half is married to an eastern half containing two former black homelands – the Transkei and Ciskei – characterised by pervasive chronic poverty. The province reflects one of the most unequal societies in the world.

This poverty is the backdrop to many little towns. Yet a few are treasures. Scratch beneath the surface and there is Victorian architecture, dusty streets dotted here and there with monuments and characterful stone churches, access to mountains and a countryside rich with beauty. 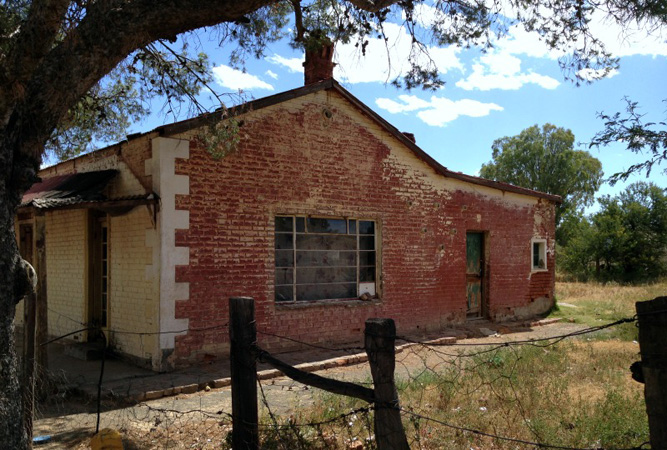 Pearston is at once gorgeous, and depressing. It lies on Route 63, the Blue Crane Route, between Graaff-Reinet and Somerset East, roughly 150 km from Cradock. You’d be forgiven for driving through without a backward glance as it is sadly neglected.

Make a point of driving around town, though, as the architecture is almost unequalled– the old Drostdy building is a national monument, and the Gothic architecture of the town’s church and significant steeple are also worth a stop.

Pearston lies at the foot of the Coetzee Mountains and is the subject of Eve Palmer’s The Plains of Camdeboo and Return to Camdeboo. You can visit the Cranemere Private Museum, on the farm she describes in her books, for a display of Stone Age artefacts, fossils, old farm tools and family photos by appointment. 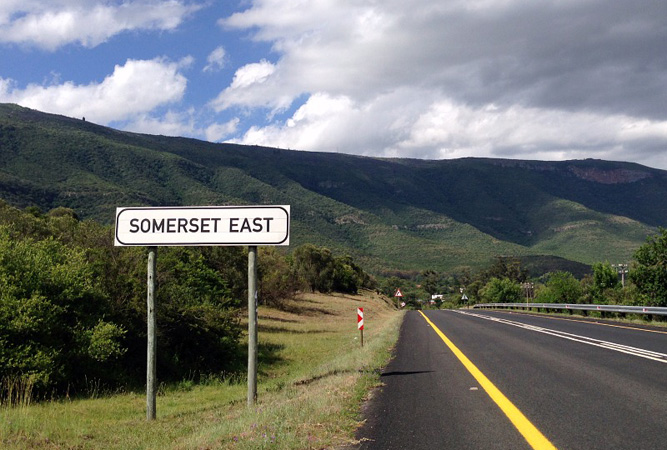 Not strictly off the beaten track at all, Somerset East has a lot of charm. It is geared for tourists and its sun-beaten boards advertise local overnight establishments, whilst the very pink tree alongside The Coffee Shop has nothing to do with coffee and everything to do with creating awareness for cancer, one of many pink trees in towns across South Africa (most of the others are wrapped in pink ribbon rather than painted, however).

Somerset East is an attractive town at the foot of the Boschberg Mountains. It has two museums – one dedicated to history, the other to Walter Battiss (the beautiful house in which the museum is housed used to belong to the Battiss family, who ran it as a private hotel between 1914 and 1917).

Walk the Somerset East Heritage Trail via churches, schools, and homesteads built nearly two centuries ago. If you can’t do the trail, walk Paulet Street for nostalgia plus. 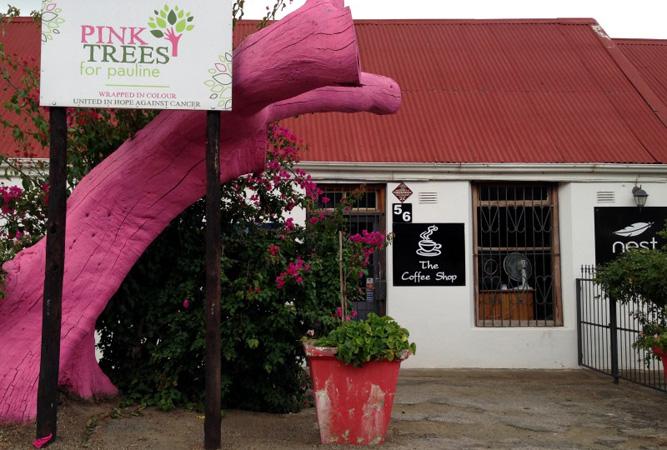 It’s active Tourist Information Centre is housed in a turquoise blue Karoo huisie, but you will have to time it well if you want to find it open (there are alternative cell phone numbers for those very enthusiastic tourists).

The two flat-topped hills just outside town are, rather amusingly, named Martha and Mary, and Tarkastad has more than a couple of buildings, old watermills, inns and iron water hydrants that give it a solid character. People stay often in the town as Tarkastad bridges the great divide between the Eastern Cape and the Karoo. 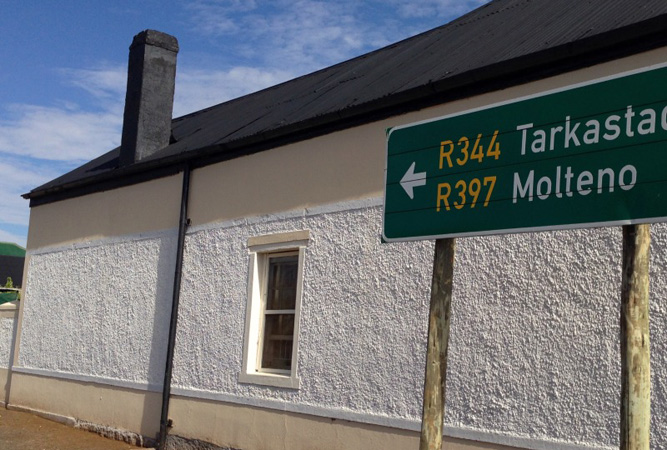 Well off the beaten track, Sterkstroom is just about the only town in this part of the country where we find overnight accommodation on New Year’s Eve. It’s a case of ‘no room at the inn’ from Knysna all the way up the coast, and at any little dorpie with easy access to a view, thereafter.

Not on the main road to anywhere in particular, Sterkstroom is easily overlooked. In this case, very obviously, by the Dorper Wind Farm (40 turbines) midway between Sterkstroom and Molteno, its advantageous position in the Stormberg an obligatory photo moment.

Our stay in Sterkstroom is a huge success (Ambience B&B is more of an experience than a visit particularly if you want to pick up the odd bit of antique furniture at the same time). Sterkstroom lies 56 km north-west of Queenstown. 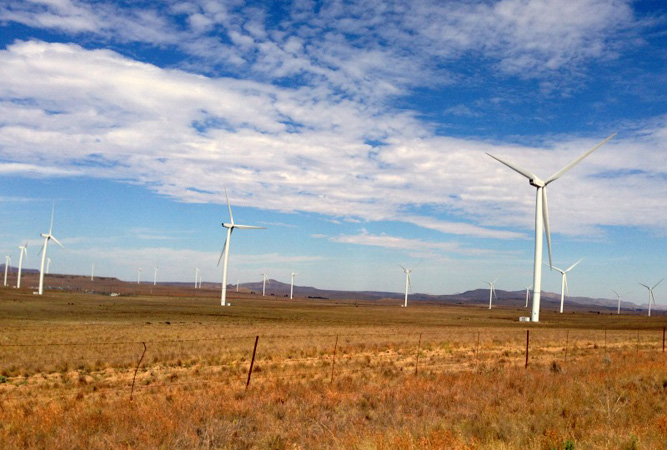 Molteno is a surprisingly darling town north-west of Sterkstroom with its own share of robust, historical homes, stone church and character. It’s best known for two reasons: firstly as one of the coldest towns in winter in the country, and secondly as the home of Ouma rusks.

When we drive through town it is neither cold, nor is the Ouma rusk factory immediately obvious (we later learn it lies on the outskirts of town). Molteno must be the only place for miles around where you can get free Wi-Fi.

Roxi’s coffee shop and art studio also serves up an all day breakfast, and the local butcher across the road doubles as a B&B. Molteno is on the Stormberg Route, a gentle drive between Molteno and Aliwal North. 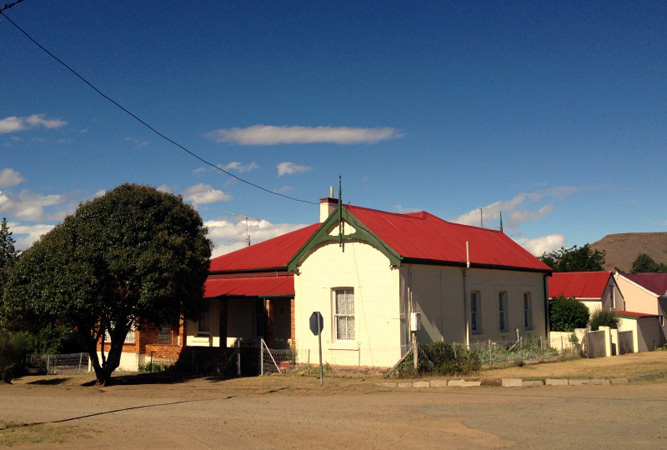 Lying in the heart of the Witteberge (white mountains), Barkly East is known as the ‘Switzerland of South Africa’ and is one of the towns most likely to see snow in winter, the peaks surrounding town almost always white-tipped when it’s cold.

Barkly East sees most of its tourists en route to the historical village of Rhodes (the mountain pass between it and Rhodes is one of the more accessible mountain passes in the area). It is a good place to fill up with petrol, stock up on meat (there is a local butcher) and pick up a quick quarter chicken and chips at the little purple and green café (no KFC for Barkly East). Find it north-east of Dordrecht. 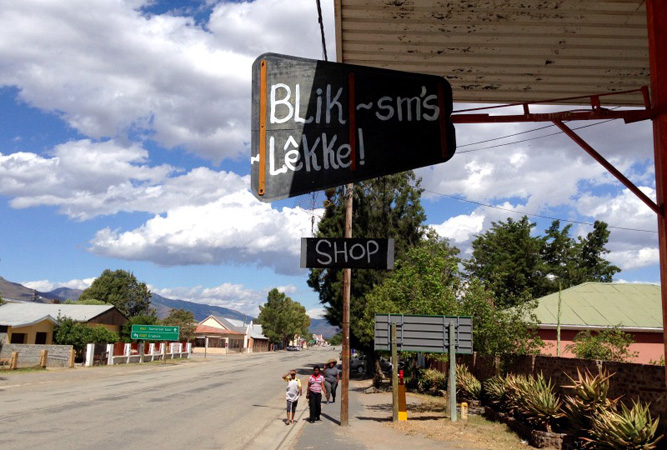