I’ve read about Addo Elephant Park, had to listen to friends enthuse about their visits, studied numerous awe-inspiring pictures taken at Addo Elephant Park, but never visited. It just seemed that much too far away from our base in Cape Town. But our recent road trip to Hogsback put paid to that assumption. Addo made its way onto our itinerary with little trouble, given my passion for elephants and the thrill at my son being able to see these beasts of the land up close.

The major plus of the park is its proximity to Port Elizabeth. Literally, the passage there takes an hour. It’s an interesting journey too, in the sense that the road is pretty desolate, not in an ideal condition, and exits PE along the R335 littered with strategically placed government houses and fences decorated with plastic bags … 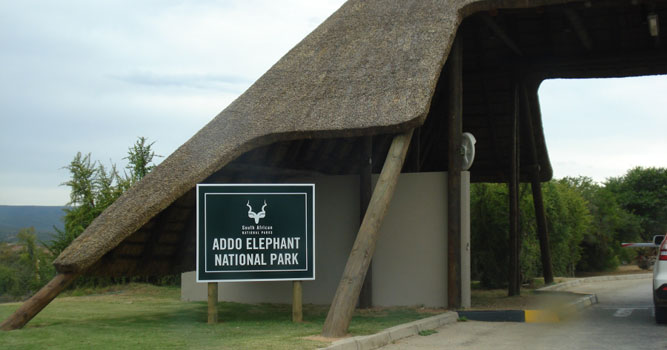 One is never quite prepared for the impact of seeing an elephant in the flesh, almost infront of you. We are so anaesthetised by over exposure to film and television that I found, even though I’d never encountered an elephant in my life, the virtual thrill that should have been ours was lost to a degree, or so I thought until they stood before me, larger than life.

Addo Elephant National Park is the third largest park in South Africa, and offers the chance of sighting the Big 7 (elephant, black rhino, buffalo, lion, leopard, great white shark and sperm whale) and the opportunity of a combination of guided walks, hikes, 4X4 trails, horseback and elephant back rides and picnic areas (they’re set within compounds with electric fences, incase you were wondering!).

The first thing you need to know about Addo is, that if you’re entering via the main entrance gate, just outside the town of Addo, you probably need look little further than the main rest camp. My perception of the park was that we would need to drive around the park for hours and, if lucky, spot an elephant or two off in the distance. But this was not to be the case. 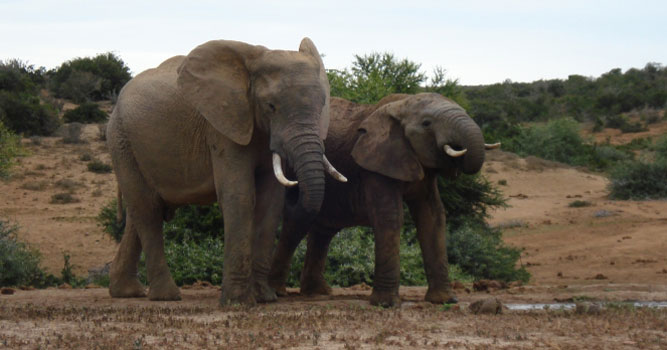 We had picked a relatively cool day with rain anticipated any minute, which possibly explained our incredible encounter because not long after we arrived, we headed down to the waterhole lookout point, which is floodlit at night for those staying in the camp itself, and were thrilled, if not a little disappointed, to see roughly six elephant heading away from the waterhole, babies in tow, back into the bushes – their slow ramble initially not even perceived by me, until I realised that the rather large boulders up on the hillside were actually moving!

Determined not to feel disheartened, we got excited instead about the buffalo drinking to the right of the hole and expounded on how well the viewing point had been set up and how lucky we could have been, even though I was swallowing my disappointment. Moments later, two males came on the scene separately – the one having taken a rather laborious alternative route upon seeing that another, larger male was already on the scene.

Excitement mounted and we decided to make a dash for the underground hide, which allows a pretty spectacular view of the waterhole, dependent on one or both elephants being on the upper side of the hole. Quietly but quickly, we sprinted, whilst fiercely whispering threats of death by violent means should my son begin hollering, round to the hide, which lies infront of and virtually underneath the lookout from which we’d just come (I later read that elephants hearing is so intense, they could follow our entire conversation, no matter how quiet we thought we were being!). 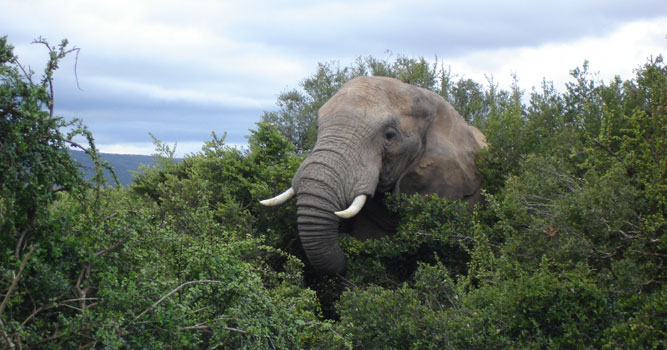 In the hot climate of Africa, African elephants need roughly 190 litres of water to drink on a daily basis. Their trunks, which are something like large and long hosepipes, have a 23 litre capacity. We had been told by our hosts in Addo that elephants tend to come down to the watering holes around midday and that we would probably sight them this way, but we were thrilled at the sight of these two males, one of which had already been drinking with the larger herd on its way up the hillside.

Elephants have strong family ties and whilst the females tend to live in groups with their babies led by an older matriarch, adult males are usually solitary, staying in contact with females over great distances using sounds that apparently our ears are not able to hear.

Because I had read somewhere that male elephants were solitary, I was wondering just how these two would interact, without the females there to keep the peace. It became apparent that there was quite a difference between the size of the elephants – the male already well watered who had turned back was way larger than the one who had arrived to our left.

However elephants rarely live alone and males are known to aggregate together, so it was interesting to watch the behaviour of these two males, who initially appeared to ignore one another, despite low rumbles. At no stage was there any sign of animosity, and towards the end of the visit, the two stood side by side conversing with their trunks. It was obvious that they were related in some way. 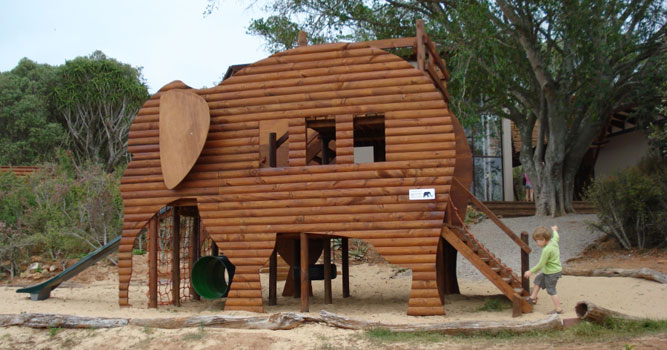 After the thrill of seeing two males so close up, we left to wander about the camp and to let our son climb on the elepant jungle gym, fairly new to the main camp. On our way back to our car, where we were preparing to enter the park in search of further elephants, we saw yet another herd descending on the waterhole!

It is an incredible sight to watch these beasts, as if by pre-arrangement, make their way to the watering hole from different parts of the park. The family, made up of elephants of all ages, including babies, put on a fine show for all those up at the main camp – spraying water around and entering into something of an altercation with the buffalo, who appeared to still be at the watering hole, despite my not having seen him whilst the males were there.

Our drive through the park, whilst it uncovered numerous warthogs, a secretary bird, kudu and yet further elephants, was nothing when compared to the elephants we had seen in the main camp. A party staying at the same accommodation venue as us were also lucky enough to see lion. They had gone on an organised game drive at sunset, obviously worth doing if you want to see other large beasts in the park. 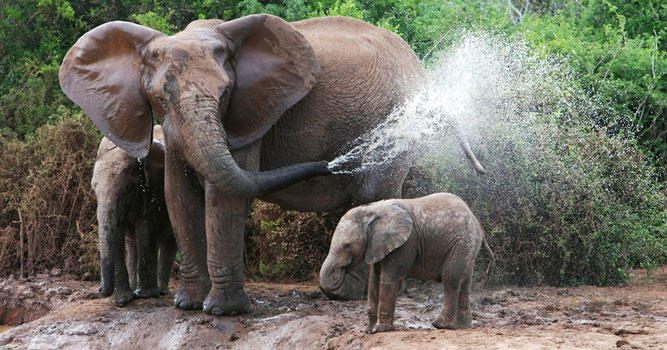 Addo is home to one of the densest African elephant populations on earth, roughly 450 of them. Sadly this same beast once roamed the entire continent. By 1979 there were only 1.3 million African elephants left and in 1989 they were added to the international list of the most endangered species, with only about 600 000 remaining. They play a key role in the environment, pulling down trees, breaking up bushes, digging waterholes and trails. Their droppings are particularly important. Baboons and birds pick them over for undigested seeds and nuts and the dung beetle use them in which to reproduce.

Because they eat so much they need large habitats in which to live. Humans are their largest ‘predators’ in the sense that most of their habitat has been lost to our need to develop. Forest and savannas have been converted into cropland, timber and fuel and we do not regard elephants as good neighbours because of their tendency to raid crops and rampage. Poaching too has had an incredible toll on these beasts.

Protected areas like the Addo National Elephant Park are vital for elephants to survive, although they are not close enough together to provide a uninterrupted area to allow elephant populations to recover. Whilst you still have the chance to go and see these wonderful beasts, visit the Addo Elephant Park!