The Eight Mountain Passes of the Eastern Cape Drakensberg (including the highest dirt road in South Africa) – The Eastern Cape Drakensberg is a developing and unspoiled area, perfect for 4×4 enthusiasts and currently offering superb value for money. For the ultimate driving adventure combining spectacular mountain views with some of the highest passes in South Africa, see if you can complete the ‘Eight Passes Challenge’. 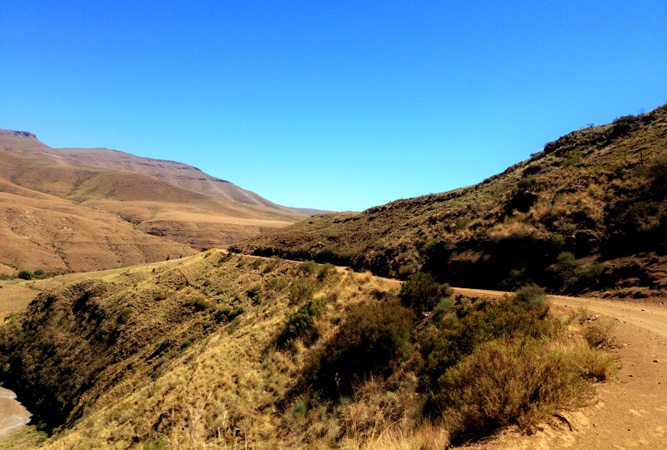 With a summit of over 2,920m above sea level, Naudés Nek Pass is the highest dirt road in South Africa. Connecting Maclear with historical Rhodes this pass is based on the route taken by the intrepid Naudé brothers in the 1890s. Following the path that their horses instinctively took they carved out the route with picks and shovels.

Today the road is more usually travelled in a comfortable 4×4 vehicle, but it still presents a challenge, particularly in winter when heavy snowfalls are common. Local advice regarding weather and road conditions should be heeded before attempting this spectacular pass.

Rhodes has a colourful history dating back to the 1880s and features many Victorian buildings. In 1997 the entire village was proclaimed as a Conservation Area in the Government Gazette which gives it official protection in order to preserve its unique character – it is the only complete village in the country that is a National Monument from one end to the other.

The town benefits from its proximity to Tiffindell Ski Resort in the winter and during summer months has become renowned for fly-fishing. The road from Rhodes to Tiffindell is scenic and steep. You don’t need 4×4, but you do need controlled power, particularly where the cement strips zigzag their way up the most extreme section.

Approaching Tiffindell Ski Resort you will pass under the highest point in the Cape (3.001m above sea level). Known by local tribes as ‘Makhollo’ (Great Mother), the Europeans named this peak Ben McDhui after the mountain in Scotland and it is affectionately referred to as BenMac by local residents. 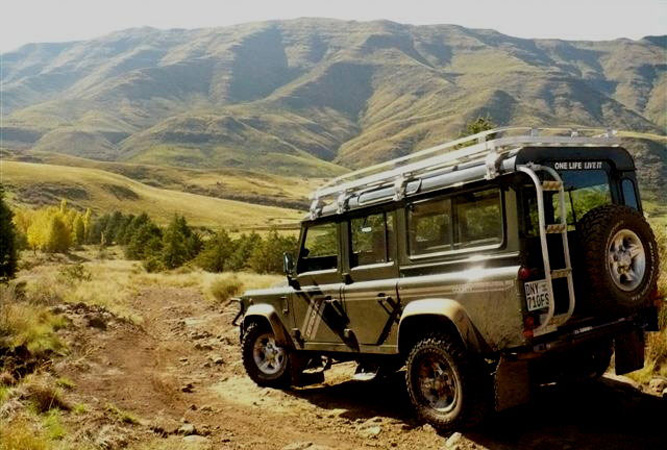 Tiffindell Resort was established in 1993 to give South Africans an opportunity to ski near their homes and others to ski in Africa. The carefully selected position of the resort, on the south facing slope, ensures that the snow lasts, extending the time available for snow skiing. Slopes cleared and groomed during summer quickly transform to ski runs after even the lightest of snowfalls.

After traversing the high plateau, the Carlisleshoek Pass winds its way down to the farming community of Wartrail. The road is narrow with some precipitous drop-offs, so do pause to check for oncoming vehicles coming up the pass as they have right of way. After the steepest section, the road gives wonderful views of Halstone Krans and the valley farmlands beyond. There are some interesting rock formations along this section, the most notable of which is ‘Funnystone’ which lends its name to the farm opposite.

Wartrail is a mountain farming community steeped in tradition. Many of the farms are still inhabited by direct descendants of the original settlers to the area. The scenery is nothing short of spectacular. Lundean’s Nek connects this part of the Eastern Cape to the Lesotho border at Telebridge. You may wish to stop in at ‘Woolys of Wartrail’ for a delicious cake, cup of coffee and to admire their emus!

You will pass by the remote Lundean’s Nek police station – whose primary roles are to prevent rustlers taking stolen stock across to Lesotho and to prevent smugglers taking green grass or diamonds in the opposite direction. Just beyond the police station the summit of the pass provides fantastic panoramic views of the Maloti Mountains.

As the road progresses towards Telebridge the river to your right forms a natural border with Lesotho. This area was part of the former Transkei and you will pass many remote mountain villages where traditional cultures and farming practices are still very much a way of life. 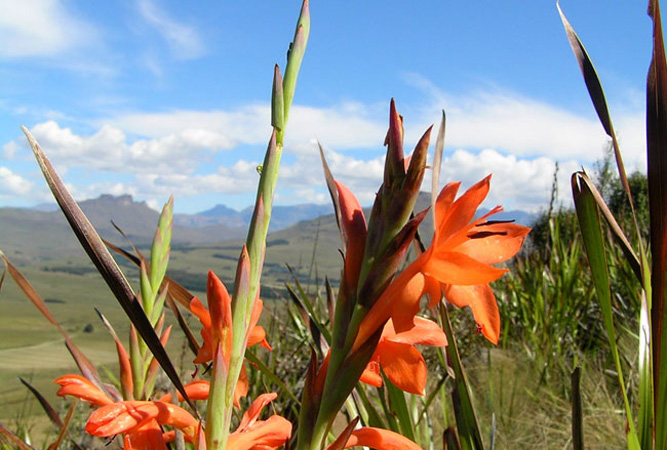 Joubert’s Pass – Lady Grey to Barkly East via the Witteberg

The third highest pass in South Africa, Joubert’s Pass traverses the Witteberg Mountains in a scenic loop. The road passes through beautiful farmlands before rising up through the Lammergeier Nature Reserve. Each year extreme adventure racers run across these exposed peaks in the 100km Skyrun which ends at Tiffindell Ski Resort.

As you descend into Lady Grey it is well worth stopping at the town dam; the wall is 25m high and this area is makes a scenic picnic stop. You can walk up a natural staircase to the top of the dam wall. The beautiful Dutch Reformed sandstone church is a National Monument and each Easter is one of the locations throughout the town used for a passion play depicting the biblical story of the Resurrection of Christ.

Whilst still on the tar road between Lady Grey and the Clifford turn-off it is possible to see part of the unique railway linking Barkly East with Lady Grey to the northwest. Owing to the mountainous terrain, a system of eight ‘reverses’ was incorporated into the line, which has a gradient of 1 in 36,  one of only two such systems in the world. The Class 19D steam locomotive that stands in Barkly East’s square is a reminder of the early days of rail transport.

From the Clifford turn-off the road ascents steadily through farmland until reaching the summit of Otto Du Plessis pass. This point has panoramic views from the top of the escarpment over the Tsomo valley. It is reputed that on a clear day it is possible to see the Indian Ocean. This may be a dubious claim, but there is no doubt at all that the vistas are far reaching and spectacular. As the pass descends to Ida it winds through sandstone gorges, forests, farmlands and across rivers in a breathtaking mountain wilderness.

This variety of habitat means that Otto Du Plessis is one of the best birding passes in the area, so keep your eyes open for mountain ‘specials’ that include Drakensberg Rock-jumpers, Ground Woodpeckers and a variety of siskins. 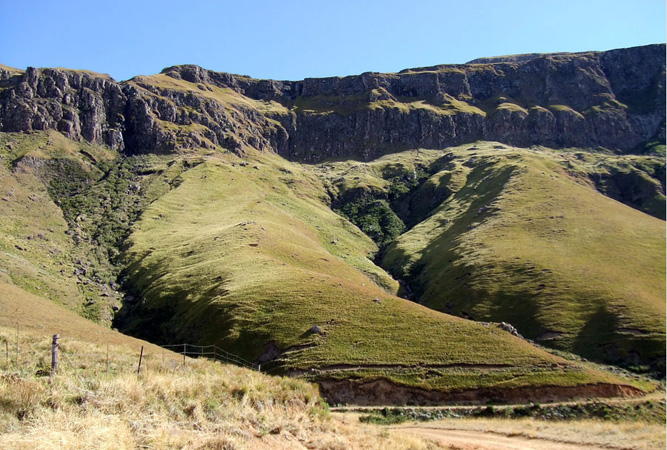 Barkly Pass is the only tarred road on the 8 passes circuit, but is still not to be underestimated as it can be extremely slippery in wet or icy weather. The sandstone buttresses and rock formations are magnificent. See if you can spot the tortoise (or is it a snail?) at the top of the pass.

The area was originally inhabited by San Bushmen hunter-gatherers and is therefore home to many fine examples of well preserved rock and cave paintings. Barkly East is well known for its sheep farming and for producing some of the best wool and most tender lamb in South Africa. A lesser known ‘claim to fame’ is that Barkly East has recorded snowfall during every calendar month, although not in the same year!

This spectacularly scenic road links the top of Barkly Pass to Ugie and combines technical driving with stunning views. The road is rough in places, so high clearance vehicles are recommended and 4×4 in wet weather.

The Bastervoetpad pass is named after the Griquas who settled in the area for a while before deciding that the valleys around Maclear and Ugie were a more comfortable habitation. The rock formations in the area are of interests to geologists as there is evidence of glacial formation.

The views at the top of the pass are breathtaking and reminiscent of Valley of a Thousand Hills. One of my favourite memories is stopping for a picnic at this point and coming eyeball to eyeball with two Cape Vultures also looking for lunch!