Now reading: Hogsbacks eco shrine – a voice for the Earth

There is something of the sacred in Hogsback in the Eastern Cape. Perhaps it is the ethereal proximity of dense, indigenous forests that hint at faery folk, or its remoteness that make it so. But few people leave here without some element of reparation, even if it is simply their faith in the beauty of nature that is restored.

The approach to Hogsbacks eco shrine, which the artist Diana Graham calls the ‘Voice of the Earth Eco shrine’, does much to reinforce this impression. It is a tunnel formed by lean, leafy Hazelnut trees that create a vortex through which one moves from one time into another. Or so it seems. 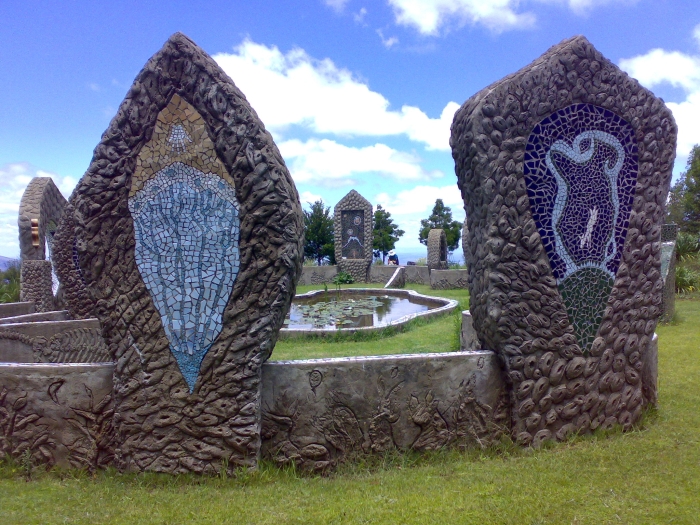 At the end of the tunnel is Diana Graham’s home, and in her garden on the edge of the Tyume Valley with the three Hogsback Mountains as a backdrop, and the Madonna and Child Falls visible through the eye of a carved cement teardrop, lies the circular eco shrine, Diana’s tribute to the evolutionary bonds that connect Earth to all other living creatures, and representative of the sacredness of our Earth.

In 1998 Diana was awarded the Green Dove award from America for the shrine. It honours outstanding projects communicating the connection between ecology, psychology, and spirituality, and the quietly spoken, red-haired woman who stood before us spoke simply and yet with an incredible passion of the loss of humanity’s humility in the face of nature.

It isn’t the only award that graces Diana’s studio. There is also the Mail and Guardian Green Trust Award, an Eastern Cape Premier’s Award and letters honouring the shrine from various gardening groups. It is clear that others, like me, find the eco shrine an unforgettable experience.

Diana dons a hat when out in the sun. She meets every visitor to her eco shrine personally, and whilst she shows you around she explains her inspiration behind each of her paintings and mosaics. The eco shrine was built in 1995, Diana’s homage to the Earth, which, whilst it links to no particular religion, has a very strong spiritual dimension. 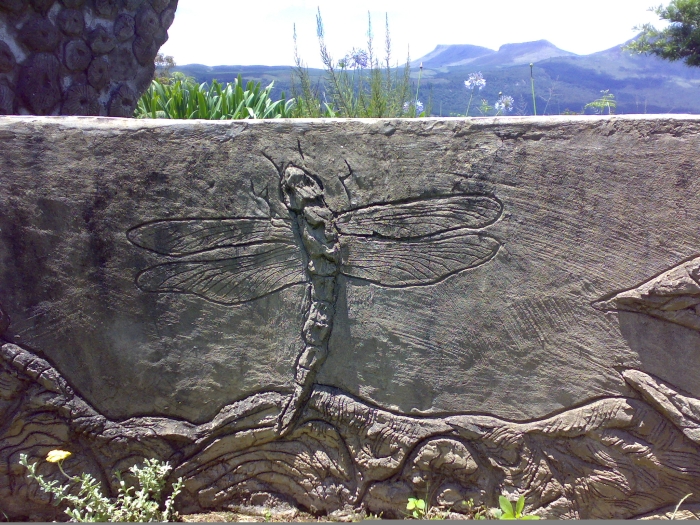 Since then, it is one of the major tourist attractions of the town, and attracts people from all cultures and walks of life for workshops, performances, readings and even wedding ceremonies.

It turns out that the teardrop is one of the shrine windows that allow one to focus on a favourite part of the landscape. The cement and mosaic enclosure that houses Diana’s paintings and sculptures, is part of a vision Diana initally wanted to create in the nearby forests. After pursuing this for a while, and soon finding that red tape and bureaucracy would stand in her way, she opted instead for the bottom of her garden.

She elicited the help of Dagamnyama Wara, a local bricklayer from the Tyume valley, who helped her build the low walled enclosure with large upright structures in which Diana’s paintings are displayed and sometimes rotated. In the centre stands a large fish pond and a fountain.

The effect is at once beautiful and thought provoking. The combination of oil paintings, sculptural uprights, mosaics, and the surrounding mountains, forests and waterfalls does exactly as intended and demonstrates the essential interaction between nature and man. 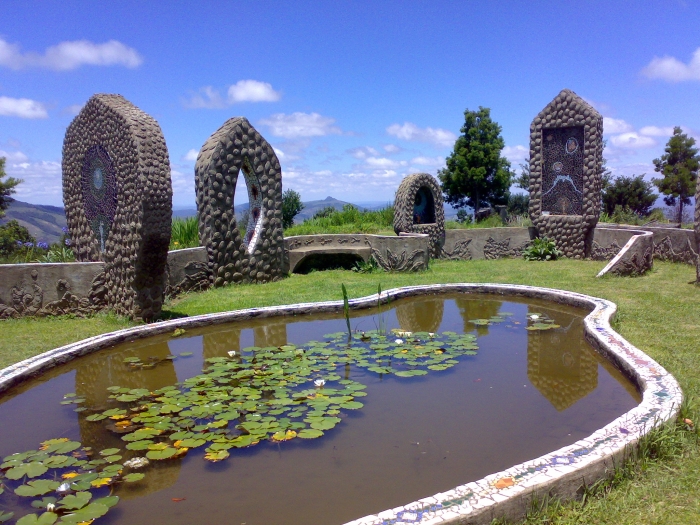 Diana has been careful too. The paintings out in the elements face the side that receives the least sun, whilst it is the mosaics, representing ancient images of San artists and photographs of the universe from the Hubble space telescope (a space telescope carried into orbit in 1990 and a vital research tool), that face the wrath of the sun.

Diana frequently mentions James Lovelock, author and originator of the Gaia theory, and is inspired by his words and the evolution of life on Earth. She speaks about herself as a Deep Ecologist, a recent form of ecological philosophy that considers humankind as an integral part of its environment with a core principle that claims the equal right of the living environment to live and flourish.

We sit awhile and drink in the atmosphere.

To one side of the house is Diana Graham’s studio. A strong smell of turpentine greets me as I gingerly cross the threshold, not wanting to disturb her at her work, despite her invitation to join her there. She enjoys having visitors though and soon we are in conversation about various elements of the shrine and her work, ecology and the universe. 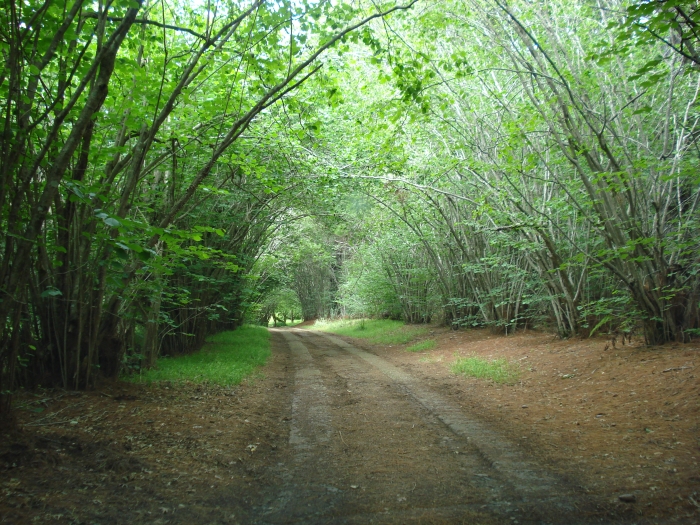 Spread out on tables are prints of her paintings, whilst the walls are graced with oil paintings for sale. I quickly acquire a number of cards and a fair sized print to frame for my walls. In this way, I can carry a little something of the eco shrine home with me. A memory to remind me of the moments we spent here.