Now reading: Hogsback Labyrinth – Travelling within whilst staying in the same place

I was overawed by the Hogsback Labyrinth set in the gardens at The Edge in Hogsback in the Eastern Cape. I’ve subsequently read someone else’s unimpressed comments and am struck anew by how two people, looking at exactly the same object, can have two such opposing experiences, despite the obvious beauty of a place.

The labyrinth is set virtually on the edge of a cliff with the most spectacular views of the valley below, the Amatola Mountains, and an expanse of sky that together have a formidable visual impact. Even if you know nothing about labyrinths, and do not intend travelling its pathways, its setting alone resounds with an intangible quality that is immediately calming, and yet exhilarating. It celebrates life, the universe and everything – to quote Douglas Adams. 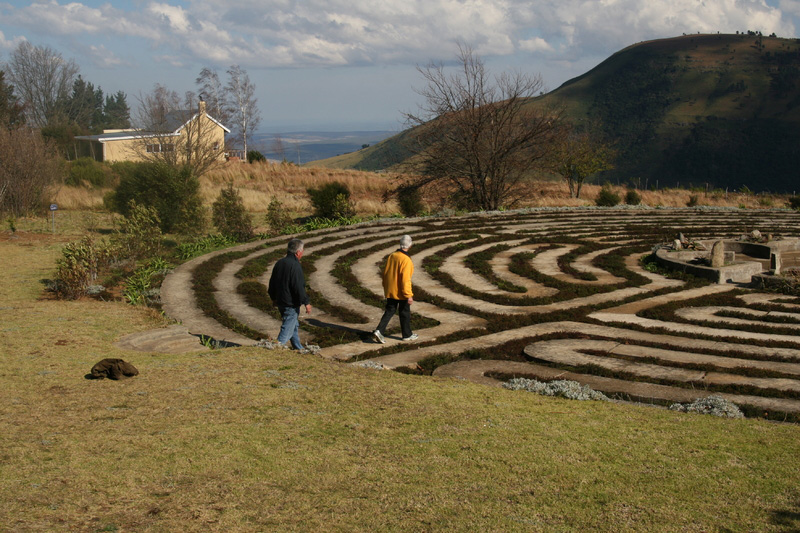 Despite its position in the midst of a self-catering holiday retreat, the Hogsback labyrinth is available for everyone. It is also one of the largest labyrinths in the world and its pathway is 700 metres, making it a total distance of 1.4 kilometres if you follow the desired journey of winding your way out again once you’ve reached the centre – plenty of time to contemplate, breath and luxuriate in the surrounding beauty.

Officially it is an eleven-circuit labyrinth, similar in design to that in the Chartres Cathedral in France, and an intricate design. A labyrinth, I was to learn, is not a maze (despite my expectations of towering walls of lavender in which I would have to ‘find myself’) but a pathway to spiritual discovery and fulfillment. The idea is to use the pathways as a way to heighten prayerful attitudes, meditative states and spirtual contemplation or reflection.

The idea is to prepare yourself carefully beforehand, doing things like quietening the mind, removing your watch and switching off your cell phone, taking deep breaths and contemplating a purpose for the walk, even though releasing any expectations is key to the allowing the pattern’s energy and purpose to reveal themselves.

On the first day we headed out here, to the edge of town, an electric storm was brewing. My excitement and determination to walk the labyrinth saw me begin the journey regardless, and in fact, the atmosphere was so invigorating, that my first experience was not the quiet and contemplative walk I envisaged, but an energetic flight together with my four-year old son, who despite my reservations, flung himself at the task of staying within the parameters created by the labyrinth’s design with aplomb and abandoned joy. 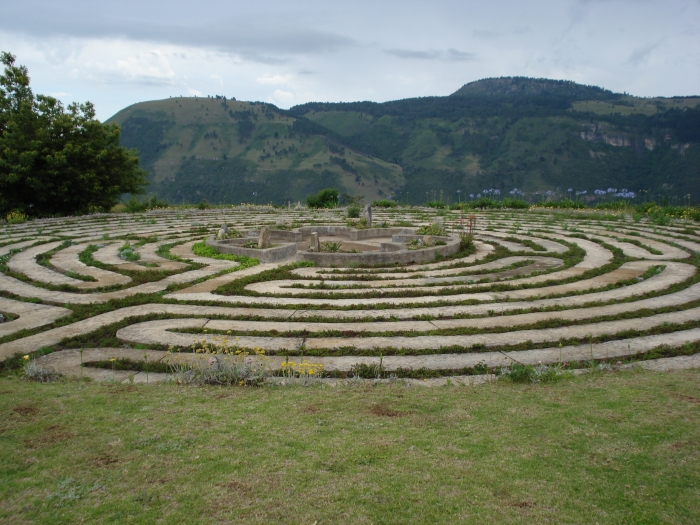 This was not a solemn contemplation but a flight of exhilaration. Yet there was no rush, distraction or anxiety to complete the course. My mind and spirit were focused and our journey was a dance, a twirl and a whirl of happiness. I was unsurprised to read later that some people feel this exuberance when the initial half of the walk is complete and they are in the labyrinth’s centre.

I was also not to complete my initial two attempts at doing the labyrinth. This time, the angry clouds off to the left, made their presence known in no uncertain terms and my son and I skipped our way back through an ever-increasing rainfall to The Tea Thyme restaurant where hot chocolate was the order of the day.

Labyrinths have a protective and nurturing nature and are often used in homes, ships and cathedrals as a carving or painting to keep all within safe. This labyrinth lies right in front of the functions venue and I can imagine that it is an incredible site for meditation classes, painting, writing and poetry workshops, and even weddings (although they only accept functions that will not disturb the tranquillity of the place).

The fifteen acre garden at The Edge Mountain Retreat runs right along the edge of a cliff and the labyrinth is but one element, although a special one. Accommodation is available in eleven or so cottages and rondavels, each in their own private space. I can imagine this would be a wonderful honeymoon stay, particularly the Cliffside Cottage that stands virtually suspended on the edge of the cliff at the end of the property. 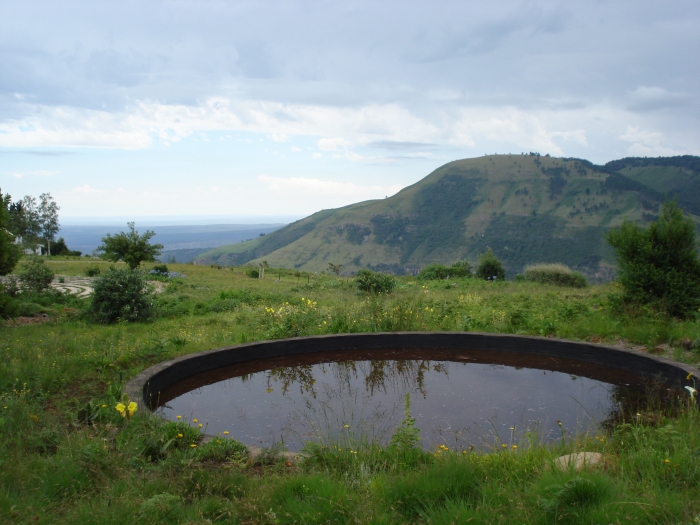 When I finally completed the pattern on my third attempt, it was early in the morning – a glorious sun-filled day during which shy Knysna loeries flirted with me in the surrounding trees and a rather alarming host of grasshoppers came to mow the leaves of the hydrangeas on the outer pathways of the labyrinth.