Now reading: Middle Earth explored – what they’re getting up to in Hogsback

There was something about Middle Earth being sign posted as an organic nursery that had us driving down a little obscure driveway whilst in Hogsback recently. Besides, we couldn’t let the Tolkienesque name of ‘Middle Earth’ go unexplored, and so it was, on a rather hot morning (the warmest we’d experienced so far) we found ourselves falling out of our car in a rather ramshackle driveway to clasp the firm handshake of Dennis.

Dennis is a treasure. A slight bearded man with twinkling blue eyes, he is both unassuming and quietly spirited, with a slightly off-the-wall sense of humour.

Whilst the ‘organic nursery’ itself, set off to the side of the house with a few cuttings in a pretty vegetable garden, was not much to write home about, the sign for his home remains on the main road for people like us, who make the effort to stumble into his domain unexpectedly. He susses us out quickly by mentioning obscure items like his earthship house, which it turns out is only in the initial stages, but we nod eagerly and he quickly gauges that we’re interested. 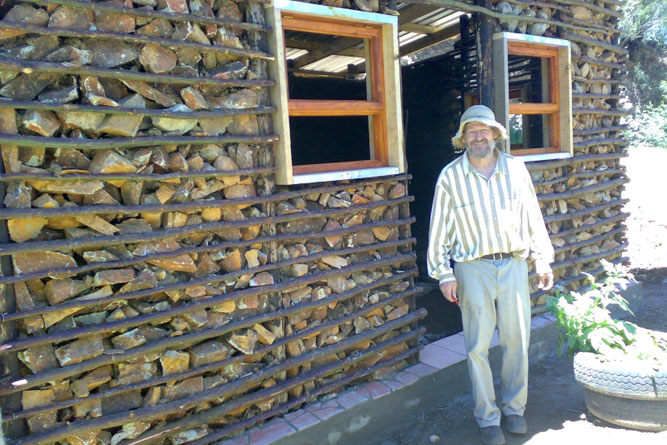 Returning inside past his aged mother on the front stoep, where she sits next to a large solar cooker and a garage so full of paraphernalia that it appears to include the kitchen sink, he comes back within moments his head adorned with a rather charming, old grass hat, unravelling at the rim, which he wisely uses to keep the sun off his face. We’re similarly garbed and ready to explore his grounds, which we soon learn are laid out according to the principles of permaculture.

Dennis ambles off across his land, which is wild and in the state in which Mother Nature, or Gaia as Dennis refers to her, ordained. It’s not ideal. There are a lot of invaders of the plant variety on his property, but he’s working with the raspy bracken that appears to have taken over and lovingly explains how these are pioneers and that he’s leaving them. The land will restore itself to its former glory.

Meanwhile, in the midst of all of this, Dennis has built swales, a popular rainwater harvesting and soil conservation strategy amongst permaculturists that are slight depressions that run along the contour of the land. Within these he’s planted things like oats, which the field mice are rather pleased about. It’s a novel way of planting in amongst the bracken, and I’m impressed.

He’s also designed any number of grey water systems (luckily for him his ground runs downhill away from the house) that involve water from his kitchen running through a system of reed beds, sand and pebble beds and finally into a storage tank – all home engineered and carefully set up. 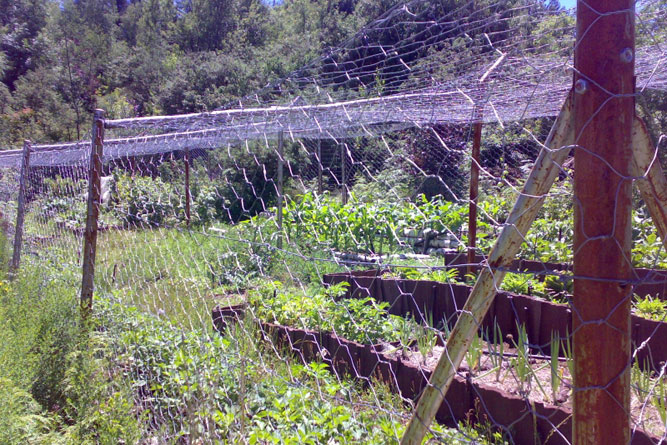 It’s admirable, and I’m already slightly envious at what he’s managed to establish for himself. Dennis will be able to cope with the water shortages we will experience in the very near future.

We slowly descend the property along the contour lines and he points out various indigenous trees that he’s planted, and those that have been on the property for a while. These will later provide shade. Almost at the bottom of the property is a large series of vegetable garden, under shade cloth and wire frame to keep the birds and baboons out.

Harvesting vegetables here has obviously been a case of first come first served, but it’s in full swing, which Dennis attributes to his wife, whose domain this is. There are lettuces, berries, spinach, tomatoes, gooseberries, spring onions, mielies and any number of herbs.

Dennis has a little mutter about development having reached Hogsback. I can appreciate that for the last 20 or so years he has chosen to escape city living. It’s a common theme in Hogsback, this need to escape the demands of consumerism, and I find it more than a little enticing. There is a slowness to life here that I could definitely relate to.

As we walk his land he tells us how he’s involved in the eco village at Khula Dharma and we hear how he managed to buy a three-legged plough, which he uses to furrow his swales, but it’s at Khula Dharma right now, where he intends heading soon to stay in the caravan he recently acquired for himself and took there for ‘escape’ time (does one need to escape Hogsback, I find myself thinking?). 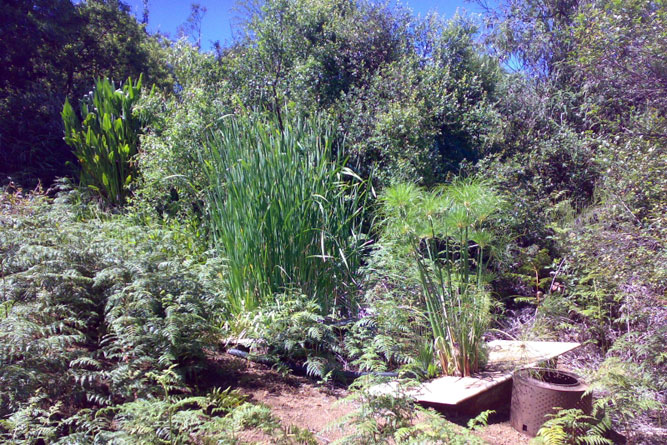 We head off over to his forest of wattle trees, which he uses as fuel for fires during winter. It’s cool within the two or three-deep patch of trees that extends down the parameter of the property and we stand awhile. From here it’s off to see the ‘foundations’ for his earthship.

He’s already designed an incredible cooling and heating system for the house, which he sketches out for me on one of the wooden beams in his shed – also filled with paraphernalia. There will be a compost loo and he has the windows and doors already stacked in the shed, all of them recycled.

I ask if the earthship is to be used as a B&B in Hogsback and he smiles and murmurs that it is just he who intends living here. From here we pass to the little outbuilding out of earth he’s recently built with its zink roof that will serve as a dwelling for one of his labourers. At the garage he laughs at his own tendency to collect junk – it’s all highly practical, useable junk for which he might not have a use yet, but will in the future – he calls it a study in ‘garbology’ and I smile too in understanding, as I’m married to someone who is a magnet for ‘things’.

We leave Middle Earth oddly satisfied with our encounter. A brief glance through a window into Dennis’ life was enchanting –  a shared morning of laughs, ideas, methods and minds. What else is life for?