There is something distinctly colonial about Shamwari Game Reserve. Perhaps it’s that I don’t get out much, but there is nothing like a lovingly restored Edwardian mansion, the cool verandah and furniture a throwback to a bygone era, to make one feel distinctly elegant, even if I wasn’t exactly attired for the occasion.

How I got there is another story, but I happened to ‘gatecrash’ Shamwari, in a way. We stumbled off an overnight train from Johannesburg, to find ourselves awaited by a 4×4 vehicle and escourted onto the Shamwari grounds …

I wasn’t officially supposed to be on the trip. I had come as my sister’s ‘companion’, for at the time she was a little short of choices and I was only too happy to oblige. So I had none of the finesse or sense of detachment that people who have every right to be somewhere manage to don with little effort. Mine was the mouth that gaped at the beauty of the place and oohed at the food and lay on the lawn looking up at the brilliance of the blue sky, wondering what on earth I’d done to deserve the visit.

Perhaps it helps to put Shamwari in context. It lies almost in the crook of the Addo Elephant National Park in the Sunday’s River Valley near Port Elizabeth. Shamwari is popular not only because it is easily reachable from Port Elizabeth and because it lies in a malari free zone of the beautiful Eastern Cape, but also because it provides an element of luxury that is a throwback to an era that is long gone.

The Shamwari reserve is 25 000 hectares that, because of where it lies, boasts five eco-systems that support an incredible array of very spottable game (you don’t have to go to extraordinary lengths to see them). The game reserve is also amongs the Top 100 World’s Best Hotels, was voted Africa’s Leading Safari and Game Reserve for the 11th year running in 2008, and Eagles Crag Lodge, one of the choices of accomodation, has earned a Green Leaf Environmental Standard.

The restored Edwardian Manor is Long Lee Manor, the first building or lodge you encounter after having entered at the gate to Shamwari Game Reserve. It’s also the largest of the seven lodges (there is now also a Shamwari Townhouse on the beachfront at Port Elizabeth, I believe) at Shamwari and it lies on a hill that overlooks expansive savannah plains where wildlife simply grazes – it’s another world entirely, and perhaps more so because one isn’t expecting it so close to civilisation.

Plyed with refreshing drinks and sandwiches in style we then hopped into a game vehicle and zooted off around the reserve to discover white rhino, bathing hippos, giraffe, antelope and even lion (you can see all Big 5 at Shamwari). Just a little aside, to give you a few more tasty morsels with which to convince friends or family that Shamwari is worth forking out for, the British TV series, Safari School, was filmed here – it aired in September 2008 on Animal Planet.

There are a great many Eland Antelope at Shamwari, and we saw a lot of them. The ranger entertained us to a few facts about this, the largest African bovid. Interestingly, it is also the slowest, which might explain why we saw one that had recently been killed by a lion. It can only run at 25mph, but it can also jump a surprising 10 feet from standing (it doesn’t even have to get a running start!). Another interesting fact about these buck is that their knees give off a sharp clicking noise when they walk. No-one is entirely sure why, but scientists think that it might be a form of communication.

We suddenly got a call (well, as much of a call as a ranger can get on a jeep) that lions had been spotted close by. We started up again from our entertaining conversation about Eland, and set off in the jeep only to spot two female lions lazing ahead of us on the plains. Through binoculars, it was obvious that they are covered in blood and must have just made a kill. It’s not always this obvious that a lion has just fed. Sometimes one needs to look at the size of their bellies or even their faeces to make certain.

Lunch followed shortly afterwards and with bodies that would much rather have had a snooze, some of us couldn’t refuse the offer to do a whirlwind tour of the other accommodation venues at Shamwari. 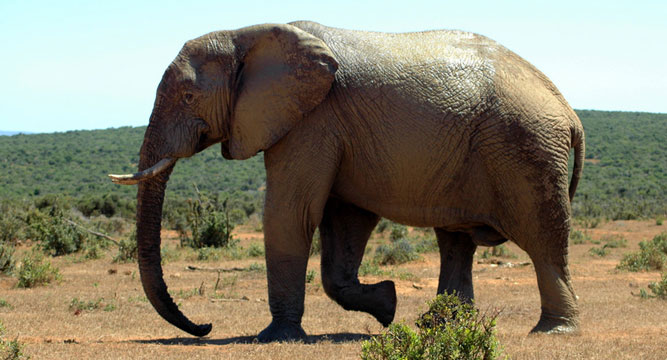 Riverdene Lodge is more of a family-friendly affair that overlooks Bushmans River and is quite beautiful, whilst Bayethe Tented Camp is just gorgeous, with tented accommodation, private decks and plunge pools with hammocks that overlook the bush – you’ll think you’ve died and landed in bush heaven. Eagles Crag, our last port of call, is definitely the most exclusive of the lodges. The focus is undeniably on luxury, and the rooms lie nestled below a dramatic cliff, which gives it a unique feel.

Whilst fleeting, I was impressed by Shamwari. Our night at Shamwari Private Game Reserve passed far too quickly, but I wouldn’t hesitate to recommend it to anyone staying around Port Elizabeth and after a few night of luxury in the bush.