If you have ever looked out into the depths of the ocean, met the approaching waves with your eyes and dreamt of dancing upon the silky smooth surfaces, then now is as good a time as any to break it to that you’re a surfer, be it with your soul or with a board – and there’s nothing you can do to change it.

Your yearning is shared by millions of men and women around the globe who cannot wait, come rain or shine, to dunk their heads beneath the surface and be a part of it all. Jeffrey’s Bay is South Africa’s favourite and most famous surfing destination.

Surfing in Jeffreys Bay is only eight hours away from Cape Town and eleven away from Durban, making it incredible accessible, or at least within reach, of the Major Cities.

So, if you’ve been to surf J-bay and can’t quite remember where you surfed or if you’re planning a trip – here’s a blow by blow list of the breaks on offer in Jeffreys Bay … enjoy!

The first or last break of Jeffreys Bay, depending on where you’re coming from and named after the restaurant that overlooks it. Kitchen Windows is a great little spot based to the right of Dolphin Beach.

It’s a reef break, as most breaks in J-bay are, and it’s suitable for intermediate to experienced surfers. Beginners can surf here on smaller days too but watch out for the rocks. Breaks both left and right, but only right when it’s big.

This is where most people will be learning to surf. There is no reef to cut your feet and as the name suggests, plenty of dolphins can be seen crossing the bay from here.  Watch out for the dumping waves which can leave a nice big bruise if you’re not careful.

This beach is similar to Muizenberg in that it’s long and sandy but the waves are very different. Muizenberg is still the better beach to learn at.

This is an exposed reef break that attracts far fewer surfers than the main touristy spots in Jeffreys Bay.

Magnatubes breaks left and right and is found about midway between Point and Kitchen Windows. When it’s working it is incredible to surf here – but beware of the sharp rocks and mussel shells. 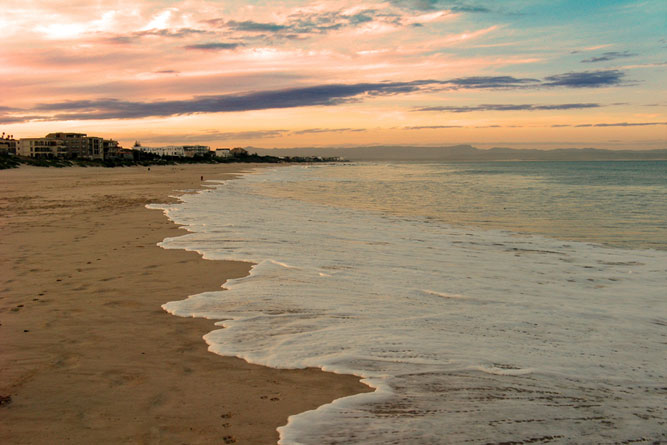 One for the goofy footers! Actually, Boneyards is also a dual breaking wave that is situated right at the top of J-bay’s famous surf point. From here down it’s one glorious ride to the next. Experienced surfers, on a perfect day, can actually link up from Boneyards all the way down to Point and ride for over a kilometre! Intermediate to Experienced surfers will enjoy this.

Welcome to one of the most famous waves in the world. Supers and Jeffreys bay are intrinsically tied, like fish chips. One is not quite complete without the other. Surfers grow up dreaming of owning a wave at Supers and the truth is that, most of the time, Supertubes just owns you.

Only experienced surfers should climb in here. Jagged reef and fast breaking waves await you as do her prefect waves. Sitting among the aloes and watching from the board walk is also magnificent and if you’re lucky the dolphins will join the surfers and ride the waves together. There’s nothing better.

Two breaks down the road from Supers (after Impossibles and Tubes) is Point, Supertubes’ far friendlier younger cousin. The reef out here is more forgiving and the waves, that get just as big, break slower, giving the surfers more time to find their feet. It’s a magnificent break and all levels of surfer can be found out here – hence the crowds during peak seasons. 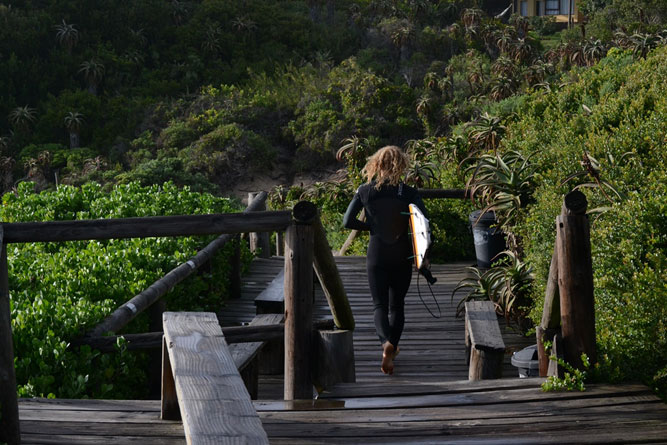 Albatross is also either the first or last break you’ll come across when you enter or exit Jeffreys. Quite far to the right of the small surfing town, Albatross is less crowded and more often than not you’ll be one of only two people out here. The waves are great when it’s working but you should definitely take precaution as the break is closer to the river mouth than the rest.

It’s a little wilder out here and often different forms of sea-life can startle you. Beware once again, of the reef and sharp mussels here; I have personally been on the receiving end of seven stiches beneath my toes due to them.

Plan to Surf in Jeffreys Bay