Now reading: Mossel Bay – 5 things to do in SA’s most mistakenly maligned town

Calling Mossel Bay a ‘harbour town’ is a misnomer. It does have a harbour, but ‘town’ suggests small, when in reality some 60 000 people live there. Mossel Bay is big enough to give the impression of a city.

What adds to this impression is that it sprawls, merging seamlessly with the beach side villages of Klein Brak River, Reebok, Tergniet, Groot Brakrivier and Glentana so that the entire bay is a twinkle at night (provided Eskom isn’t load shedding).

Travel brochures tend to gloss over Mossel Bay’s domination by oil refineries; from the N2 they are all you can see between the highway and the harbour. Mossgas’ gas-to-liquids refinery meets 7% of the country’s liquid fuel needs, initiated 22 years ago when gas was discovered offshore.

As a result, light industry monopolises Mossel Bay to such a degree that one’s initial sentiment is to give the town a wide berth. How wrong this impression, and how much more Mossel Bay has to offer than one thinks… 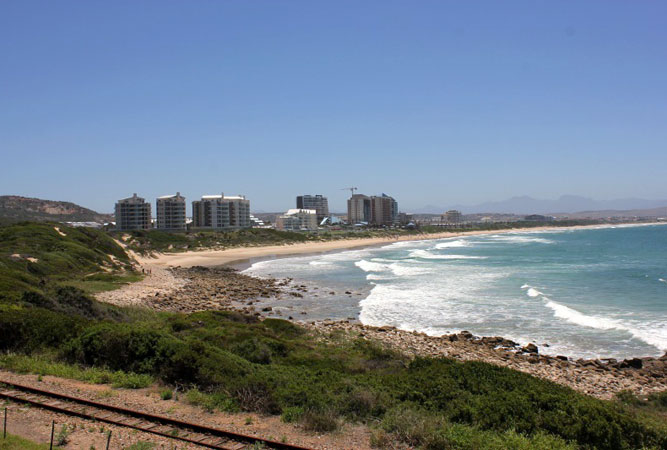 The new, industrial section (that includes Langeberg Mall) immediately obvious from the N2 detour around town, known as the Voorbaai; and the old town that bears a distinct resemblance to Cape Town’s naval village, Simon’s Town.

Mossel Bay’s ‘old town’ is known as the Old Quarter and is famous for its well-preserved historic buildings.

It isn’t visible from the N2 and you need to head towards the Point and Cape St Blaize to find it. En route, much of what is perched above and to the east of the harbour is the Old Quarter. 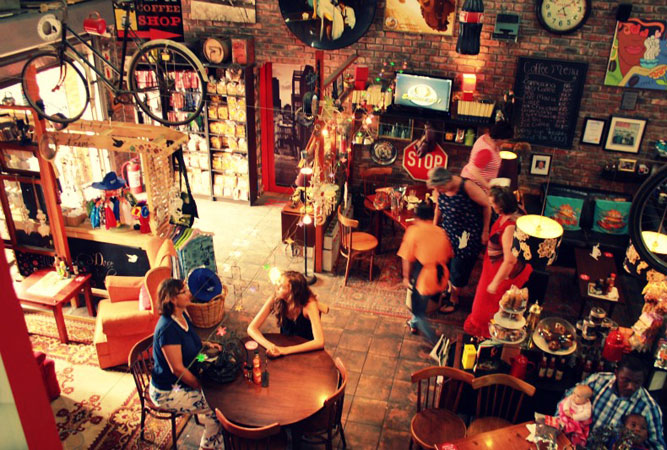 Baruch’s Coffee roastery is an institution.

Everyone knows about it, and during peak season a line outside the door bears testimony to its popularity.Interestingly, it lies in the heart of Mossel Bay’s industrial area; not where you would expect to find a coffee shop at all. It didn’t start out as such.

Aahron Baruch had just sold his successful coffee shop when, bored, he decided to open a roastery. Before long friends and fans were begging him to provide an outlet for his Israeli food (Aahron is originally from Ashdod, 50 km from Tel Aviv).

Soon he had to move to bigger premises to allow for the queues (people make a trip to Mossel Bay just to visit Baruch’s). 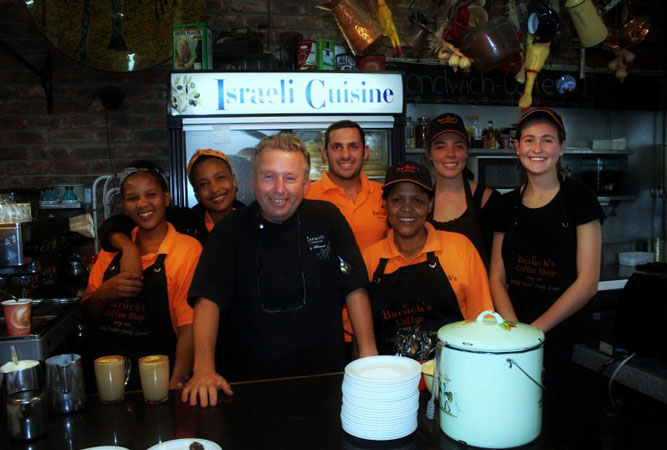 His quirky décor, the heady smell of drum-roasted coffee beans, the gorilla vegetable garden he has out back alongside the railway line, and his effusive personality combine to produce a ‘come-back for more’ coffee experience.

He also has a give-back project whereby he trains locals as ‘coffee-operators’ (Aahron is not overly impressed with the term ‘barista’ when applied solely to coffee as the term typically refers to ‘bartenders’ who produce both cold alcoholic drinks and hot drinks). Baruch’s is worth a detour off the N2. 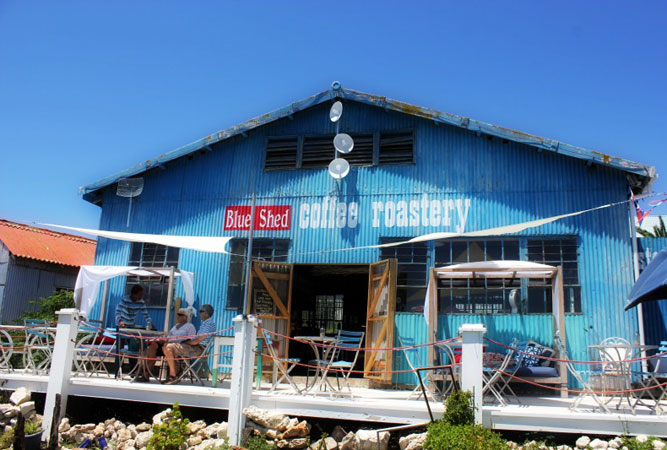 Mossel Bay doesn’t stop at one roastery. There is room for two. In particular because each of them is remarkably unique.

The Blue Shed is a complete contrast to Baruch’s. Set up on the hill on Bland Street, in the heart of the Old Quarter, The Blue Shed is literally an old shed, painted blue. The views from its little white wooden, and umbrella-filled, deck are of the blue waters of the harbour.

The overriding atmosphere is rustic meets eclectic and the result is extremely trendy.

Outdoors there are tables scattered around the garden, whilst inside there is a mix of antique and rustic chairs, and tables of different heights. Don’t go expecting meals, this is essentially a coffee-and-cake or savoury tart-type coffee spot. Nonetheless, one more notable hangout for Mossel Bay! 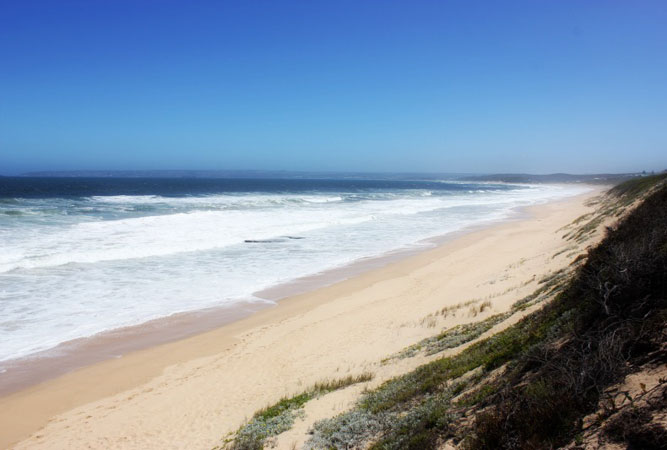 Mossel Bay has not one, but two blue flag beaches close to the harbour. They’re also simple to find.

De Bakke is just outside the CBD en route to the harbour. It’s a smaller beach than Santos, but popular, with a big parking area and a caravan park virtually on the shoreline. Rocks and patches of grass make it an unusual little bay in which to swim, and the views of Mossel Bay’s newer and more modern skyline on the Voorbaai are amazing from here.

Santos beach is the bigger and more sandy of the two. It is perfect for swimming and tanning and has at its heart a beautiful, historic Victorian sandstone pavilion, built in 1906.

The town would have lost it completely if it weren’t for a private company who restored the building after the woodwork was destroyed in a fire in 1979. The same caravan park extends between De Bakke and Santos beach.

Where: off George Road
When: summer (the water is a balmy 20 to 22 degrees) 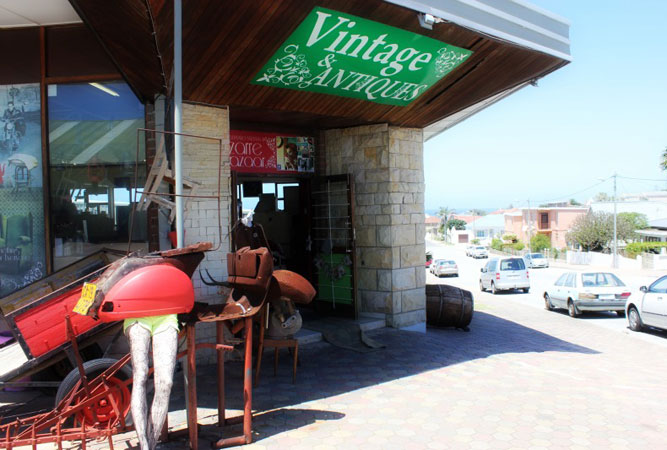 With names like Nostalgia, Vintage Antiques, Déjá Vu, Bizarre Bazaar Velvet Vinattic and Velvet Vintage, you can only want to explore the many antique and second-hand shops in Mossel Bay (the town has more than its fair share).

Many of the shops opt for a retro, eclectic effect, some of them have clothes and curios, hats, and gowns and others still offer coffee, screen old movies or hold events now and then.

Where: various, trawl the Old Quarter
When: all week (some close on a Sunday) 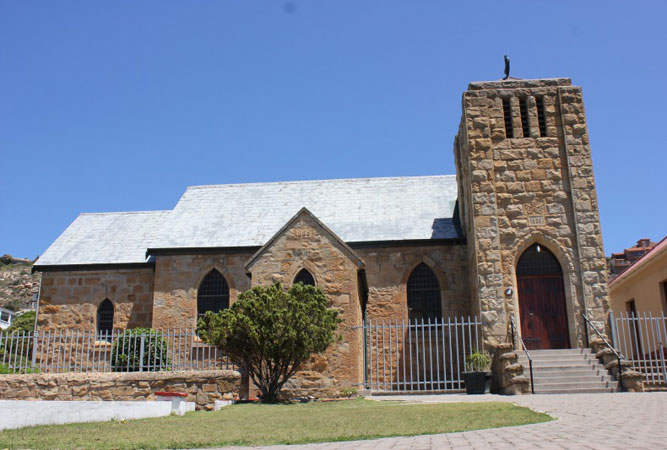 If you love old furniture, then you will love the old buildings in Mossel Bay as well:

St Thomas Catholic Church, the Kliphuis Coffee Shop (built in 1913), the Old Masonic temple built in 1884 for the St Blaize Lodge, the Granary (1787), reconstructed in 1987, Urk House (1904) find it in Church Street, the Ochre Barn, now the Protea Hotel, Elgin House – just next door to St Blaize Terrace; there are over 50 historical, local buildings. Explore it on the Mossel Bay Historic Walk.

Where: Find a detailed map at the Mossel Bay Tourism Information Office.
When: all year round 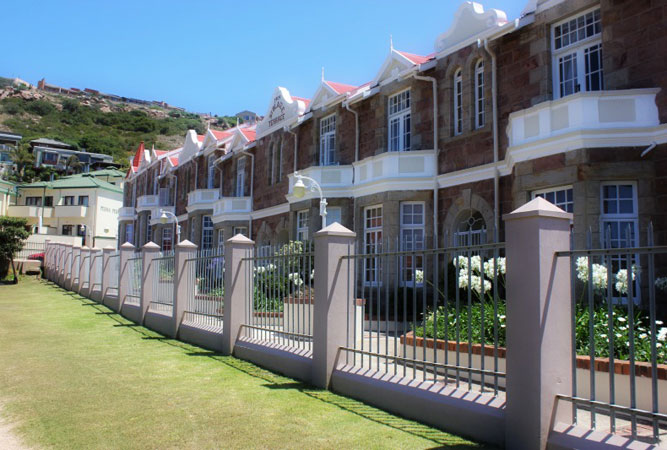 You will find that Mossel Bay offers a range of accommodation in hotels, wonderful guest houses and bed & breakfasts.

And there are plenty of self catering options available too. Holiday homes and cottages and holiday apartments – its a wide range and you are sure to find the perfect spot whether you are on a budget or wanting to splurge. 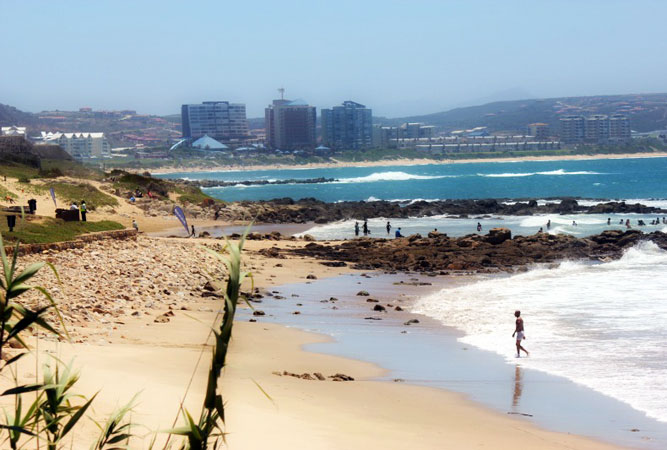