The Garden Route is full of gems – some are well known and frequented by tourists (such as the Bloukrans Bridge, Knysna Heads, and the Tsitsikamma), while others are secreted away for only the avid explorer to enjoy.

Spitskop is one of the latter. It is part of the Ysternek Nature Reserve, which is a forest reserve that covers almost 12 square kilometres and showcases some of the most stunning scenery in the country. 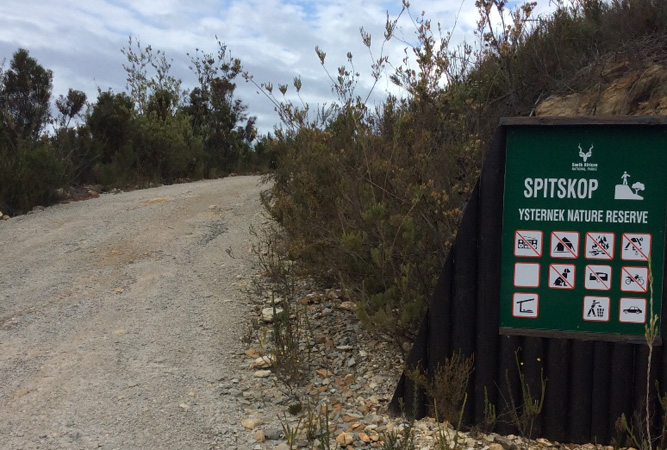 Interestingly, the road up to Spitskop (one of the highest points in the area) changes periodically. It starts as lush green forests, which is so typical of the verdant Garden Route. Then, it changes to a scrubby Karoo-like fynbos, which is colourful as it flanks the gravel road in wispy romance.

This, together with the surrounding mountains, valleys and farmlands, create a stunning ‘sample’ of what makes South Africa such a visual treasure trove. 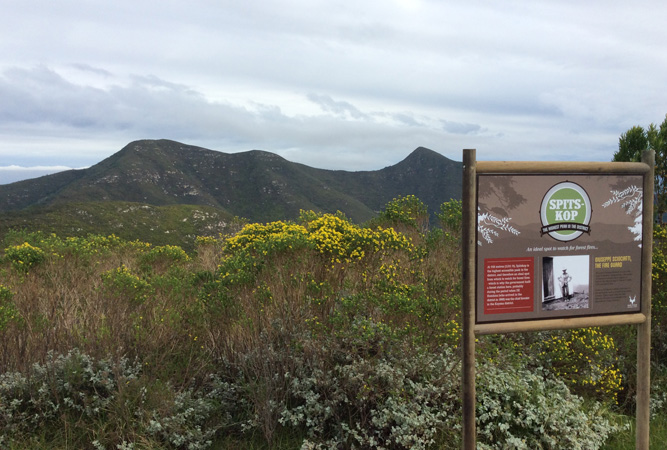 We chose a chilly day to head off to Spitskop. It had recently rained and the roads were not in their best condition. However, these conditions also meant that the green vegetation put on a stunning display, blanketing the mountain passes as they rose to meet the clear skies ahead.

We took a 4 x 4, which was an advantage, as the gravel roads were bumpy and a little slippery in places. However, it certainly is not essential, as long as you take the drive slowly in a sedan or 4 x 2. 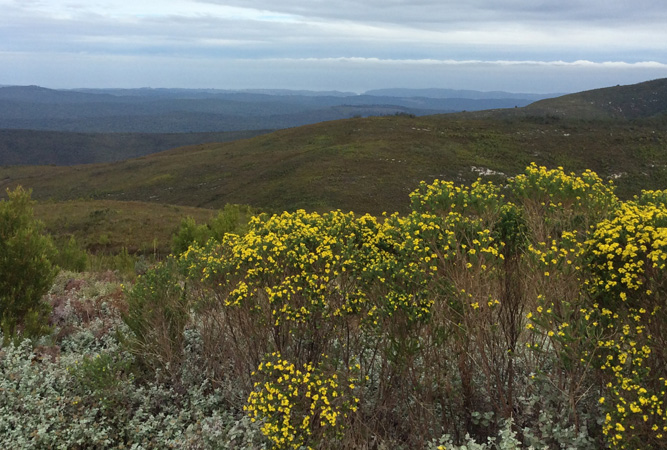 Along the road, just over 11 kilometres before the Spitskop lookout, is Diepwalle. This is part of SANParks and offers basic but neat overnight lodging and a tearoom that is situated in the historic stone building that has stood the test of its isolation and the passing of generations.

This is the final stop for a number of local hikes through the forests and valleys, and has breath-taking views of the local landscapes. There are also clean ablutions here. 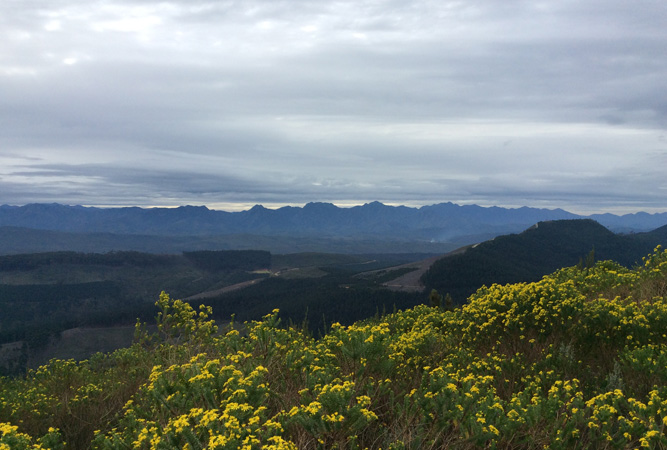 Back on the road to Spitskop, we enjoyed the ever-changing views as we climbed higher and higher; the road becoming a little bumpier and less established with each kilometre.

Finally, there is a well-marked turn-off to the Spitskop viewpoint. A short stretch later and an incomparable vista unfolded in front of our eyes as we arrived at the idyllic viewpoint.

Alone with only the sweet scent of the greenery and the sound of the breeze in the fynbos, we could drink in the unhindered views that stretches as far as our eyesight allowed.

In the distance, we could even see the Knysna Heads standing tall; although, from our height, they looked like toy soldiers.

When we had just about exhausted our eyes and finished the battery life of the camera, we headed off. We chose not to go back to Knysna (about an hour away), but to head off in the opposite direction to Plettenberg Bay, which was about 30 to 40 minutes from Spitskop.

The drive there again exhibited a different side to the Garden Route beauty as we went past farms and little home-based shops selling honey and other delights.

This is an area full of character and ideal for a day drive or those wanting to see the parts of the Garden Route that sometimes get overlooked in favour of the better-known tourist attractions.