Stilbaai, also known as Still Bay, is well known amongst Capetonians as a peaceful, seaside getaway on the Garden Route, perfect for weekends. It has, to a large degree, managed to maintain an unspoiled and natural environment that is particularly beautiful during spring, with a pretty beach village atmosphere on the eastern side of the village, and beautiful beaches.

But come here during the festive season, and you begin to wonder whether the residents may not have been a little hasty in calling their bay ‘still’. It has become so popular and so busy at this time of year that ‘hectic’ is probably a more apt description, and we were there before the major onslaught that happens just before Christmas.

One approaches Stilbaai along a beautiful strip of road that runs parallel to the Goukou River, a lovely setting that, given the right time of day, is simply gorgeous. It’s one of the major attractions of the seaside village that the Goukou River is navigable for around 17 kilometres inland from the beach and town. As one nears the town, pretty homes are evident on both sides of the bank, whilst a bridge spans the distance between the two.

The other major attraction is of course the beach, which stretches for miles, offers safe swimming and evidence of fish traps used by an ancient people who survived on an abundance of fish that date back to the Stone Age. Lappiesbaai Beach, Stilbaai’s main beach, has attained blue flag status for the fourth year running, the only beach on the stretch between Jeffrey’s Bay and Hermanus to have done so. And the area is filled with nature trails, bird watching opportunities, the chance to spot whales in season, and one of the best surf spots around. It’s a beautiful picture. 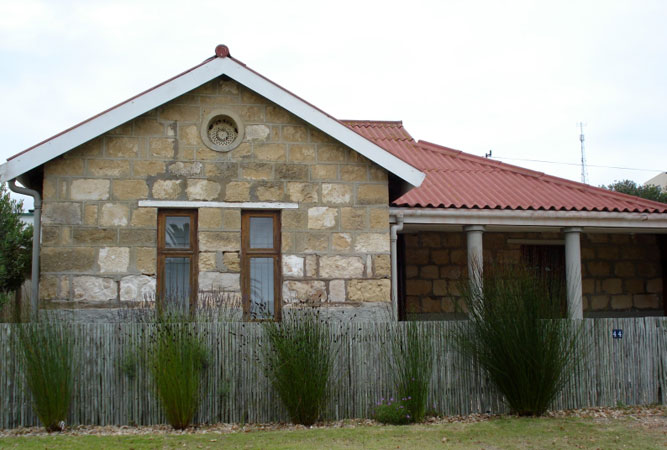 Still Bay is divided by the Goukou River into east and west. The west side is mainly residential. It’s where you’ll find more permanent residences, a series of shops, the police, the municipality, the harbour and the tourism bureau. The eastern side is given over to holiday makers, predominantly, with two caravan parks, the beach, beach sideee entertainment, and a series of very prettbeach sidedee ‘cottages’, roughly a block from the seaside. Here life revolves around the beach.

But it becomes a pity when such a beautiful spot is inundated, and certainly, it must place an incredible pressure on the environment, particularly as this last festive season fell during a severe drought to the Garden Route and surrounds. Whilst some brochures call this time of year in Stilbaai ‘festive’, I for one would rather give it a wide berth.

But there are attractions at Stilbaai, other than the beach, should you be there over a busy weekend. On the eastern border of town sits the Preekstoel – what appears to be a roughly hewn rock in the shape of a minister’s pulpit – an interestingly shaped rock that is just one of a number of fascinating rock formations along this strip of the coast.

Closer to the beach there are circular stone structures that the Khoi-San people created hundreds of years ago to catch fish at low tide, some of which are still used today.

Just beyond the Preekstoel is the Geelkrans Nature Reserve, named after the yellow sand cliffs that rise above the high water mark, and home to 165 hectares of south coast fynbos and coastal rhenosterveld. Even more beautiful and worth a visit is the Palingkloof nature area, something of a nature garden, through which the Paling stream runs.

Paling is the Afrikaans word for eel and indeed there are eels here that can be fed by hand, they’re so tame. They’re a really different looking type of eel, in the sense that they have blue eyes, and they travel all the way to Mozambique to lay their eggs. Once they’ve hatched, the young eels then make their way to Stilbaai where they spend most of their lives, before returning to Mozambique to lay eggs, and so the cycle continues.

Rumour has it that these eels have been living here for the past 125 years. 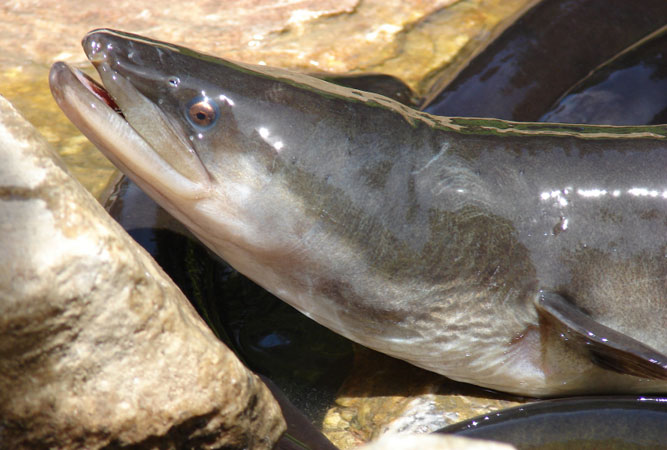 You also don’t have to stay in Stilbaai to enjoy the beauty of the area. ‘Eden Country’, also known as the T4 route, links the towns of Albertinia, Stilbaai, Riversdale, Heidelberg and Witsand. Just outside Stilbaai, on this route, are quite a few alternative places to stay, most of them on farms that escape the havoc of town, yet place you easily within reach of the beach and attractions.

And make sure that you have time to include Wild Olive Guest Farm’s breakfasts or lunches. The farm not only makes delicious home-grown food, but produces enough organic produce to supply the locals with food too.

As we wound our way away from town we passed men up to their thighs in the estuary, hoping to catch a cob or two when the tide is in. Idyllic, yes. Just not during the silly season.

Still Bay is a beautiful place to visit with so much to see and plenty to do , but there are two fishy attractions in Stilbaai which are a must see. The beach is lovely, peaceful and relaxing and there are awesome hiking trails. Right alongside the beach yo...

'Mom, how did we first come to Earth?' It's my son (why does he always manage to ask questions like this from the back seat of the car?). I gawp at him in the rear vision mirror; aren't four and three quarter year olds supposed to ask easier questions? I've al...

We're no strangers to Wild Olive Guest Farm. We're one of many who return to this peaceful refuge where a couple of chalets and a cottage lie on the banks of the Goukou River estuary and a wild organic vegetable garden, set in amidst a series of olive groves, ...