For anyone travelling through the scenic George / Knysna area, one of the attractions is, or always has been, the Outeniqua Choo-Tjoe, one of the last remaining steam trains in Africa. However, many will be as disappointed as we were to learn that the “Choo-Tjoe”, as she is affectionately known, has not run since June 2009.

So what does a family with two train-mad young boys do, to stem the disappointment? We were lucky to learn from the Transport Museum that something called the Outeniqua Powervan was running in its stead.

Now steam, it is not, but train it is, with only two cars or carriages,  seating only 12 people each, and powered up the railway pass by a ‘motorised trolley’. So we made our booking, which you need to do, and prepared for our departure at 11h00. (A second run had been added at 14h00, since it was holiday season.)

The railway pass travels parallel at times, to the old Montague Pass, and the train powers its way up to the highest point. The journey is accompanied by a knowledgeable guide, who narrates details from the resident flora, to the history of ox wagons traversing the hazardous pass. At points on the upward journey you can view all three passes; the old dirt road, the railway pass and the majestic new road. The upward route ends at the point at which the railway pass and old Montagu Pass meet – the old road is worth a leisurely drive on an alternate day. 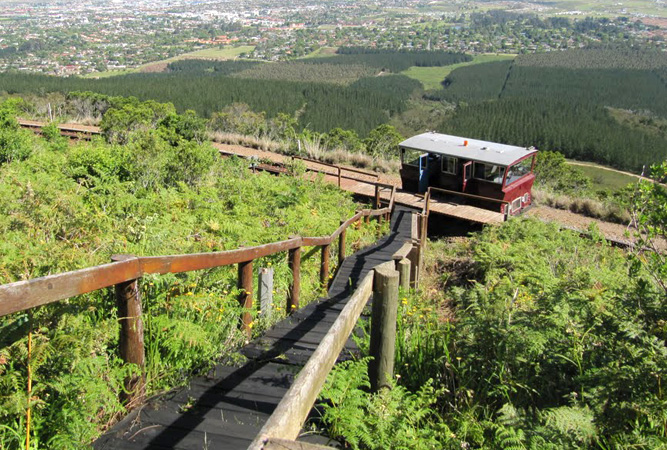 On the upward journey one passes through six little tunnels, which were a sheer delight for our two young boys! At times the pass is so narrow that you think you are going to brush the rock face on either side! The railway passes through areas of forest and fynbos, including an abundance of king proteas, culminating in spectacular views at the summit.

The return leg brings you back through the six tunnels, with the cars travelling in reverse order, offering passengers an alternate view. About halfway down the pass we stopped at a picnic site, to enjoy our packed lunches and take in the surrounding scenery. The Powervan descends back into the Outeniqua Transport Museum in George, which houses an array of steam locomotives and carriages from days gone by. Save some time either before or after the journey, to explore the amazing history of travel in South Africa, including a fascinating photo gallery of steam trains.

The two hour experience, with an additional half-hour for lunch, costs R95 for adults and R75 for children; a worthwhile way to spend a morning. An alternative for the active at heart, is to take a mountain bike with you on the up journey, and cycle the 15km back down the Montague Pass into George and to the railway museum.

The railway line between George and Knysna was declared an officially preserved line in 1992. With the Southern Cape storms of 2006, the line was extensively damaged and closed for reconstruction. The Outeniqua Choo-Tjoe has at various times resumed operations along the scenic route between George and Hartenbos, and then extended onto Mossel Bay, but a lack of funding and maintenance to the line has again resulted in its closure. The Powervan however is an interesting and worthwhile alternative.