Now reading: 7 Great Gardens To Visit In And Around Durban

The benefits of being in nature are myriad: it improves cognitive function, it restores our ability to use directed attention and working memory (two rather crucial mental talents), it renews a feeling of serenity, and apparently even boosts our immunity.

On the flipside of this constantly being exposed to city living, where we must forever be vigilant, avoid obstacles, ignore irrelevant stimili (like our neighbour’s music and yapping dogs), sit in front of computers for far too long, and expose ourselves to overcrowding and poor air quality, has negative effects on our health.

Seeking out gardens within a city is the fastest way to restore balance and calm to our lives. And in Durban, there are many such gardens… 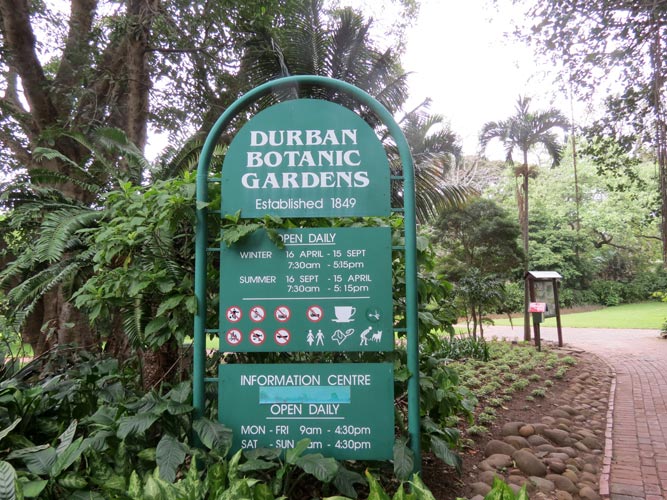 Right in the heart of Durban’s Golden Mile, the Amphitheatre Gardens near the entrance to North Beach provide a pond, fountains and and beds set with sub-tropical plants. Sandwiched as it is between one of the city’s busiest roads – on which you’ll find some of Durban’s largest hotels -, and the beach, it tends to go unnoticed and remains largely ignored.

Except on Sundays when there is an art market. Once a month this is boosted by a flea market that sells just about anything from African curios to pineapple on a stick, doused in a sprinkling of curry masala.

Said to be Durban’s oldest public institution and Africa’s oldest surviving botanic gardens, the city’s Botanic Garden not only boasts a new and upgraded entrance but a Living Beehive based on the design of Zulu Beehive huts. Its steel frames are covered by a living roof and walls made up of indigenous plants – its rather stunning and warrants a visit.

The lake, the bird life of the park, the cycads, the sunken garden, the fern dell, the orchid house and the palm walk make a visit here a delight for the senses. End your time there at the tea garden where there are a range of treats. Always worthy of at least one visit. 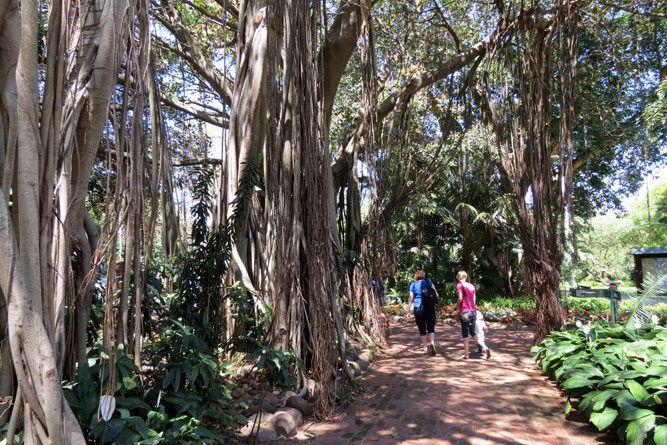 Also known as Mitchell Park zoo and Mitchell’s Park this lovely garden, in the heart of Morningside, has been here for years – it started life as an ostrich farm in 1910 but began to add other animals when it failed to make a profit.

Whilst today’s animals no longer include Nellie the Indian elephant, gifted to the zoo by the Maharajah of Mysore in 1928, it does have giant tortoises, buck, raccoons, a number of monkeys and an array of birds. Lush, green gardens accompany the zoo, and a pretty tree-filled children’s playground accommodates cricket, frisbee and ball play as well as simply chilling out with a book. The tea garden is an added attraction.

Just over the road, Jameson park may have began as a pineapple plantation but today it is a wealth of roses, best seen during spring (September to November) but worthy of a through stroll at any time of year.

Whilst not officially a garden, this gem on the Umgeni River is a huge attraction and, with walk-through aviaries and a mass of vegetation, waterfalls and rock faces, you will be as much in nature as you would ever be in a park. Of the 24 threatened bird species living here, 17 are bred in the park.

One such example is the wattled crane, listed as vulnerable there are only about 8000 in the wild. Get here for the free-flight show that allows birds to glide past you in full and unrestricted flight, and baby bird feeding hourly throughout the day. 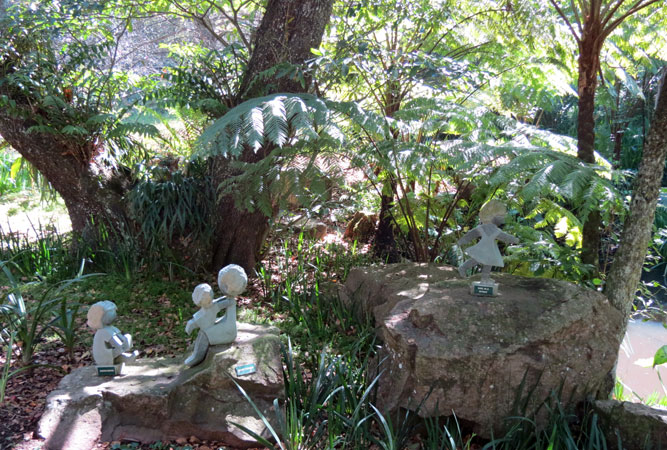 The Temple of Understanding in Chatsworth is not only the biggest Hare Krishna temple in the southern hemisphere, but the unusual building in the shape of a lotus flower lies in a series of beautiful gardens that invite contemplation. An immensely tranquil and peaceful atmosphere, the beautifully crafted temple and gardens are a space of solace and few visitors leave unaffected. The architecture is inspiring. Do not miss the vegetarian restaurant that serves fresh fruit juices and Indian vegan food.

Worth a trip to ‘Maritzburg? We think so. Rosehurst Garden in Boom Street is the quintessential English garden. It was created 30 years ago and heavily influenced by the garden at Sissinghurst Castle in south east England. Hence you can expect to wander in amongst hedges, topiary and informal plantings. Divided in to numerous smaller gardens, each is coded according to colour from the yellow sundial garden and mauve side garden, to the pink lawn garden. Best is the old Victorian manor now home to an array of idiocyncratic shops. The tea shop offers simple sandwiches and light meals.