Arguably the world’s greatest ultra marathon, Comrades was started by Vic Clapham to honour and remember those who fell during the Great War of 1914 – 1918.  Run between the KwaZulu Natal cities of Durban and Pietermaritzburg, the first race started outside the Pietermaritzburg City Hall on 24 May 1921 with 34 runners and has been run every year since then with the exceptions of the 2nd World War years of 1941 – 1945.  The direction alternates each year – giving us the ‘up run’ or the ‘down run’.

This year the race starts in Pietermaritzburg and will end in Durban.  Athletes are given 12 hours to complete the gruelling run with the timer starting as the gun fires at 5.30 in the morning.  The race is run ‘gun to gun’ so if you are a first timer right at the back of the pack and it takes you seven or eight minutes to get over the start line you are already seven or eight minutes into the race before you’ve even crossed the starting line! 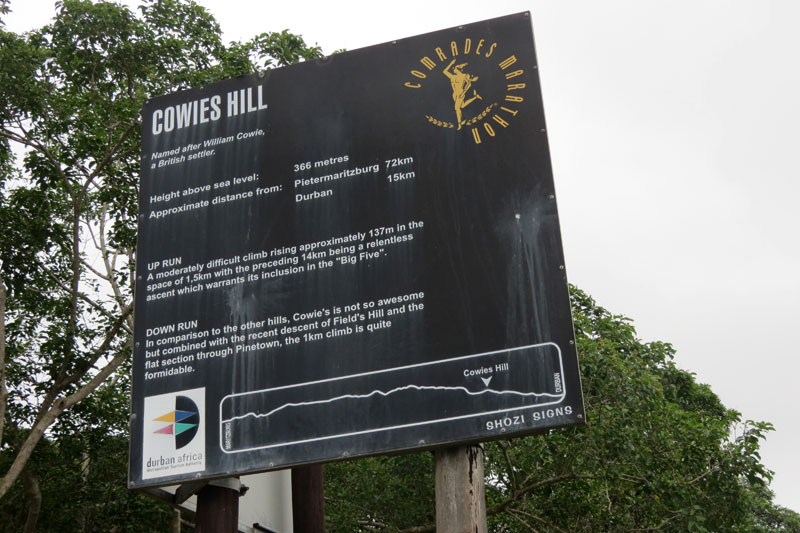 Comrades has always had a special place in my heart.  My father has run this race ten times and I grew up supporting him and remember the excitement of getting up early on Comrades Sundays to hear the cockerel crow to mark the beginning of the race.  He crossed the finish line of his tenth race with a good nine minutes or so to spare and was presented with his Green Number by Comrades legend Wally Hayward.  Green Numbers are given to those who have either won the race three times, have been awarded five gold medals or have run the race ten times.  A well deserved prize – whichever way you get that Green Number.

The ‘down run’ is made up of the following five stages:

After starting in Pietermaritzburg runners take on a gentle downhill towards the top of the well known Polly Shortts.  This hill is only 7km from the start so is effortless on fresh legs.  On the ‘up run’ Polly’s is a different beast altogether.  A short climb to Ashburton follows before heading down Little Pollys towards Mpusheni.  By now runners are 18km into their journey.

From the highest point to the foot of Inchanga the route undulates and offers comfortable running.  The two kilometre climb up Inchanga begins from the Mayets Superette and while reasonably long, the gradient is not that severe – most runners should not battle with this stretch of the route.  At the top of this hill runners would have run 42.2km and will be on their way to the halfway mark (and cut off) in Drummond.  After this point the route climbs steadily to the top of Bothas Hill.

Bothas Hill continues to kill the legs with another 2.5kms of the downhill running.  After this downhill section the route ascends into Hillcrest.

Runners get to Fields Hill after 10kms of comfortable running from Hillcrest.  Jelly legs get a bit of a rest but another three kilometres of downhill will have competitors stopping at the physio stations along the route.  At the bottom of Fields Hill the flat stretch of Pinetown gives the legs another rest!

The one kilometre climb up Cowies is formidable after the flat section of Pinetown and the damage already done to legs on previous downhill sections.  From here runners go through Westville, 45th Cutting and then finally, the last couple of kilometres to the end at Sahara Stadium Kingsmead in Durban. 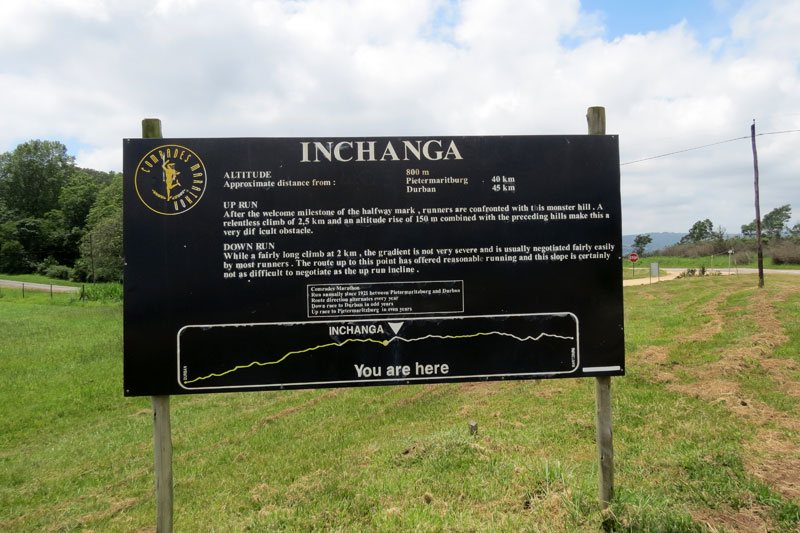 The spectators and crowds, whether they are braaiing on the side of road or clapping and cheering the runners on make all the difference in the world.  I ran 67kms of this race in 2008 and will always remember the kindness of one man who, when I thought I could not tackle a probably very small rise in the road (it looked like Everest to my exhausted legs and mind!) took my hand and walked up it with me.  It is those small acts that get runners to the end of the 89km journey.

The Comrades Marathon is a South African treasure – no other country in the world has a race quite as unique and special.  It attracts thousands of runners each year (16, 657 entries for 2010 and of that number 6, 873 are novices), some from all over the world.  The Comrades Marathon Association believes that all South Africans should run this race once in their lifetime – will you be a novice next year?

Good luck to all runners taking part on Sunday!!