I am so looking forward to Thursday, September 26th because not only is it our wedding anniversary but we are also marking the occasion with a trip to Durban to watch the KwaZulu Natal Philharmonic Orchestra in concert as part of their 30th anniversary celebrations.

I am constantly bemoaning the fact that not much in the way of international shows ever comes to Durban but after reading about the KwaZulu Natal Philharmonic Orchestra World Symphony Series line up taking place at the beautiful City Hall on Thursday evenings through September and October thought that I must make the effort to get to one of the concerts.

The KwaZulu Natal Philharmonic Orchestra (KZNPO) was founded in 1983 as part of the Natal Performing Arts Council and fifteen years later was restructured as an independent body. The orchestra is a professional orchestra made up of about 70 musicians who travel extensively. Known for their excellence and innovation, this orchestra has undertaken a number of very successful tours to both Europe and other parts of Africa and in 2011 took part in three productions; two in Gauteng and one in Grahamstown.

The World Symphony Series takes place on Thursday evenings from September 12th through to October 24th. Concerts are held at the Durban City Hall at 19h30 until approximately 22h00 with a 20 minute interval. Pre-concert talks are held at 18h15 at the Alhambra Room which is at the Playhouse Theatre directly across the road from the City Hall.

Entrance for the pre-concert talks is R10. Ticket prices for the concerts range from R45 to R200 and are available from Computicket. 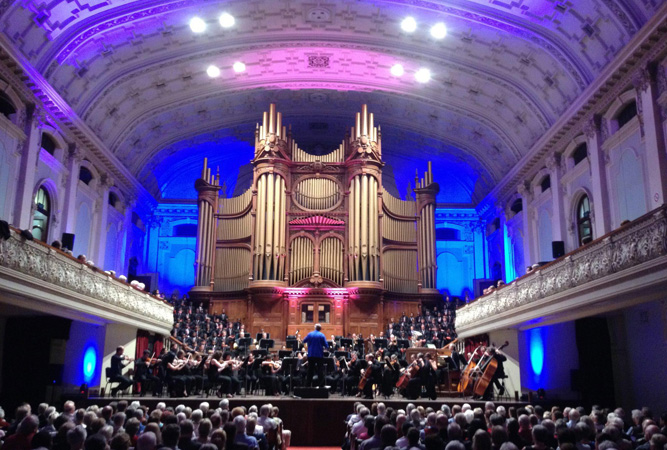 The KwaZulu Natal Philharmonic Orchestra World Symphony Series line up is as follows:

10 October – English Gems with soloist Maria du Toit on clarinet and Arjan Tien conducting. There will be a performance of The Wasps: Overture, Concerto for Clarinet (World Première), Serenade for Strings and Enigma Variations.

17 October – Fabulous Fours with soloists Alexandra Dariescu (piano) and Zandile Mzazi (soprano). The conductor is Arjan Tien. There are performances of Beethoven:  Piano Concerto No. 4 and Mahler:  Symphony No. 4.