Now reading: If There’s One Thing You Do In Durban – The 9 Markets of Warwick Tour

Everyone knows the Victoria Street Market in Durban’s inner-city. Its vibrantly painted building looks more like the palace of a Maharajah than a market. It lies on the edge of Bertha Mkhize Street (formerly Victoria Street); the site of a market since 1910.

Victoria Market is a predominantly Indian spice and flea market fused with north African curios, art and jewellery, fresh fish, Chinese wholesale goods and everything and anything in-between. It is a ‘safe’ option for tourists overwhelmed by the noise and inner-city turbulence that happens just outside the building, on one of Durban’s busiest street corners – Warwick Junction.

Some 460 000 commuters pass through Warwick Junction on any given day. There are 23 taxi ranks, 19 bus terminals and two major train stations in the near vicinity. It’s no wonder the average tourist’s eyes widen at the thought of venturing beyond the relative safety of the Victoria Market.

But the Markets of Warwick tour does just that…

It combines an interesting shopping experience (you’re encouraged to bring your wallet and spend money) with a bird’s eye view of how the majority of people live in Durban.

We meet up with Precious Dlokova, our tour leader who used to sell species in the Early Morning Market, just outside the main door of the Victoria Street Market. With her is a group of German tourists, their tour operator, his son, and a solid looking security guard who is to remain with us throughout the tour.

It’s a Friday morning, the best day to do the 9 Markets of Warwick tour if you want to include the bead market – one of the highlights of the tour.

We leave the building for the streets outside, crossing over as our senses are accosted by the blaring of loudspeakers, the press of people, and smells that combine incense and the atmosphere of streets well used. 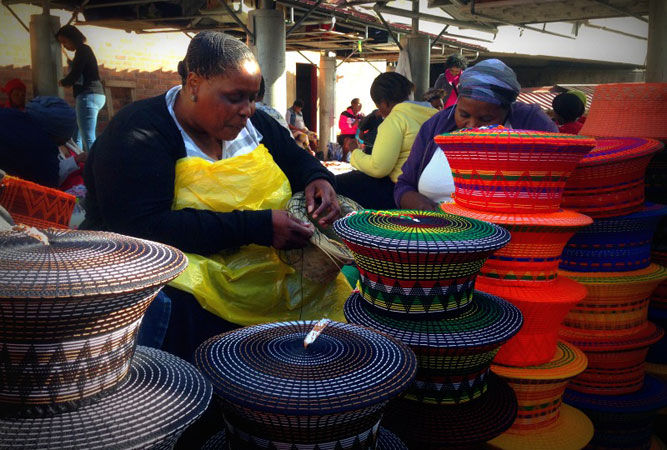 Photograph: Ladies at the Bead Market

At the bead market I’m ripped off. Precious is aghast to hear I’ve paid twice what I should have for a little green and blue necklace. We chat about bead prices as I explore a bead stall on one of the lower terraces, where women have spread sheets, blankets and throws on which to display beaded baskets, hats, necklaces, bracelets, earrings, and mugs.

At this stage I’m still getting used to being able to flash my iPhone around, whilst taking pictures, without fear of its vanishing into thin air, so I fail to fully appreciate the beauty of the bead work. I could easily have spent twice as much as I did as the prices are really reasonable.

Just beyond the beads, in a passageway below the street, is the traditional incense and lime market. It’s a fascinating little enclave, three types of impepho (Helichrysum aureonitens) lying in heaps on fashioned tables, alongside big balls of white and red lime used by traditional healers.

The flowers and stems are dried and burnt as incense, the relaxing elements of the plant said to connect one with the ancestral spirits. In mugs is umqoga, a mixture of herbs and lime said to lighten complexion. 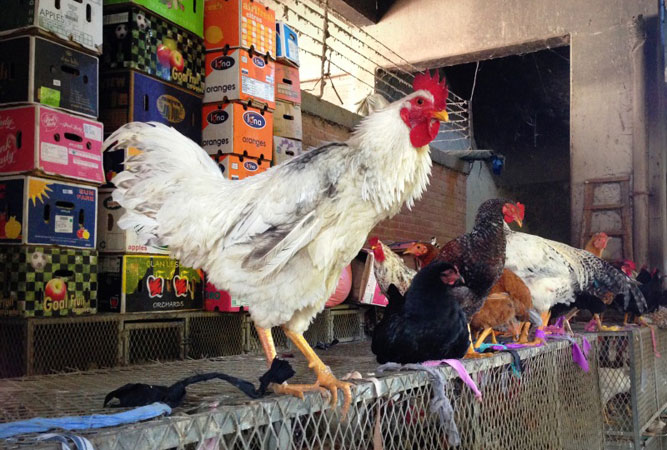 The grave of Saint Badsha Peer is a mystical Muslim heritage site and still a place of worship. It lies upstairs from the Impepho market, at the Brook Street Cemetery where an annual mass gathering still happens as part of a week-long ceremony. Trading here is suspended during the ceremony, and in return the Mazaar Society has donated a portion of the shelter to cover the Brook Street Market.

The cemetery is one of the only sites where people from three different religions lie buried alongside one another – Christian, Muslim and Jew. Just outside the shrine is a thoroughfare where music blares, and brightly coloured clothes billow in the breeze.

We head up the stairs from the Brook Street Market to Berea Station. This privately managed market is an eclectic combination of religious clothing alongside shoes, DVDs, belts, wallets and traditional Zulu spears and shields. We’re luckily here outside of peak hour, or we’d otherwise be swept off our feet.

Every time I hang back to take photographs I am aware of the security guard at my shoulder. I’m probably safer here than back home in Cape Town. 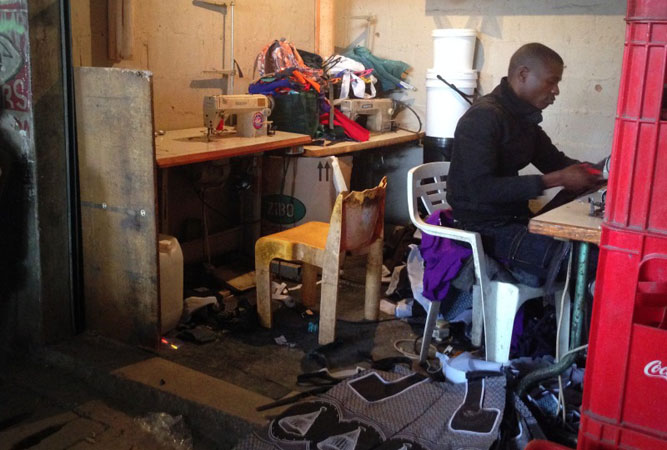 Connected almost seamlessly with Berea Station Market we enter the Early Morning Market, passing tethered chickens and roosters as they call from the roofs of their cages. A woman grabs her red chicken and holds it by its feet for a prospective buyer (I think of my three chickens at home and wonder if they appreciate their relative luxury).

Now over 100 years old this market is stall upon stall (670 in all) of fresh produce, with the odd spice and flower stall thrown in for good measure. Bowls crammed with tomatoes and carrots go for R5 each, whilst barrow operators hustle in the aisles. Thousands come through here early morning and evening, but it’s under threat as the City wants to build a mall. Stall owners oppose the idea; the debate continues.

For the less queasy amongst you, the bovine market is fascinating. Its name comes from the meat from cows’ heads, a Zulu delicacy – a slaughter house up the road supplies the heads, but the sight of them lined up on tables being skilfully hacked with axes can leave one a little breathless.

The market is outside the Early Morning Market beneath a shelter that needs some TLC (holes in the roof leak when it rains), but this is the least of your concerns given the noise (there is a taxi rank just across the road), the press of people here for lunch (long tables where people sit and eat dumplings, rice and beef run through the market) and the smell of cooking meat. 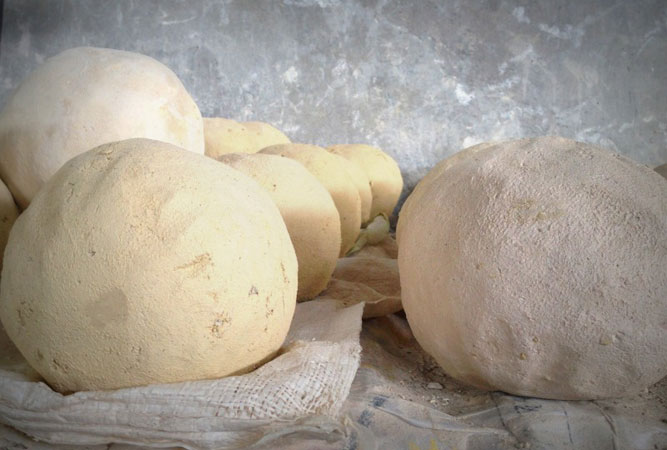 Now things get really loud as we leave the Bovine Market and head back the way we have come, up onto a pedestrian bridge alive with the sound of thumping sound systems, and DVDs for sale.

There are also scarves, hats and other market items but it’s difficult to see anything with the noise. Interestingly the bridge was a place of high criminal activity before traders encouraged the City to allow them to trade here. A steel interlinking bridge now connects the music and herb markets, its design selected as ‘a building of the century’ in South Africa.

Intriguing are the traditional healers and herb sellers who sell their wares above the markets, on the top of the bridge. The market is a herb pharmacy. Zulus consult healers and herb sellers with their complaints and then buy from the herb vendors. Stall upon stall displays bits of bark, crushed plants, herbs and leaves. But we’re definitely regarded with some suspicion here. It is the least welcoming of the markets.

With our senses overloaded the tour comes to a close back at Victoria Market. Of all the sights and attractions in Durban, this is an eclectic, vibrant experience that no visitor to Durban should miss. The Markets of Warwick tour is an initiative of the local traders to showcase their wares and the vibrant energy of their markets. The tours are assisted by the NGO Asiye eTafuleni and aimed at locals and visitors to Durban.