Durban seems to have become peppered with references to King Shaka, the man who ruled over the Zulu clan and brought them to great glory. The new airport in La Mercy, which is the gateway to KwaZulu Natal, bears his name and was christened King Shaka International.

As we travelled along what in my day was considered ‘downtown’ Durban, I recalled fond memories of swimming at Addington and South beach, which were always calmer and less frequented by Durban’s trendies. uShaka Marine World lies opposite what is now called – yes you guessed it – uShaka Beach, which is said to span some fifteen hectares. 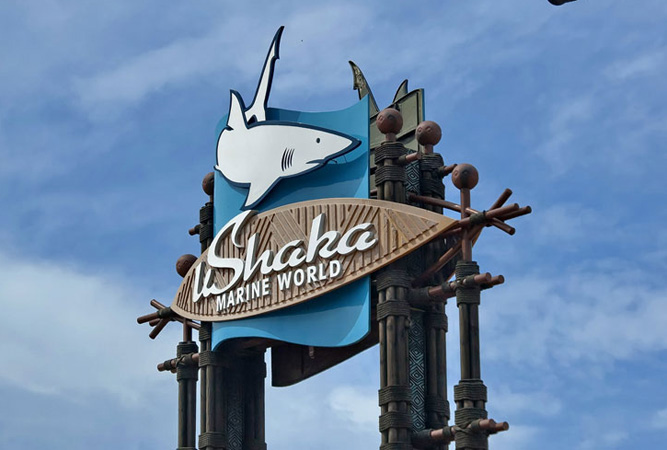 Arriving on a cloudy April day, holiday makers were starting to queue, about an hour after the opening  time of 09h00. Make a note that you are prohibited from taking refreshments into the theme park, unless you want it confiscated! There is an array of fast food outlets on offer, but none of it is cheap (nor desirable) and we managed to hold onto our bottles of water, which stood us in good stead on a warm day.

I confess to not having covered half of what is on offer at uShaka, but we were on the go enjoying ourselves for six solid hours. And even then our departure was necessitated by our having to make the one-and-a-half hour return journey to Ramsgate on the south coast, more than wanting to leave! 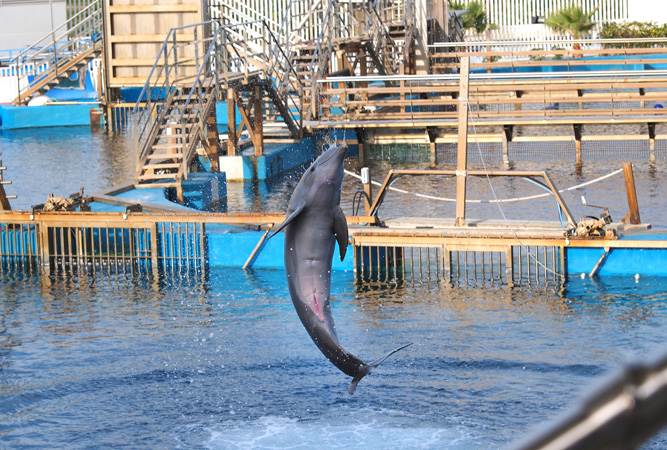 The entrance fee is steep, so be sure to get your full day’s worth.  We paid R120 per adult and R90 per child, which for a family of four comes to R420, but allows you access to both Sea World and what is known as the “Wet and Wild’ experience. My younger son and I deposited ourselves at the children’s pool, complete with water fountains and small water slides, which kept him content for many an hour. I must confess to expecting the water to be horribly warm, particularly in a children’s pool, but it was surprisingly chilled throughout the day.

As I sat observing, I was greatly impressed by the constant clean up and supervision operation; every ride and pool had at least one life saver or security person to ensure safety, and cleaners were busy picking up any discarded litter and emptying bins almost continuously. I can imagine on a very busy day this must be a necessity and was just relieved to know that my child would not be pushed onto a ride or overwhelmed by any rowdy teenagers!

About the most adventurous I could get my three-year-old to be was to take a sedentary float with me on a large rubber tube down the adventure river ride, which is a 450m journey and  flows right through the park, giving me a good idea of just how large and varied it was. Beware the odd waterfall that unexpectedly gushes forth during the process, but I managed to bear the brunt of them, sparing my somewhat anxious son! 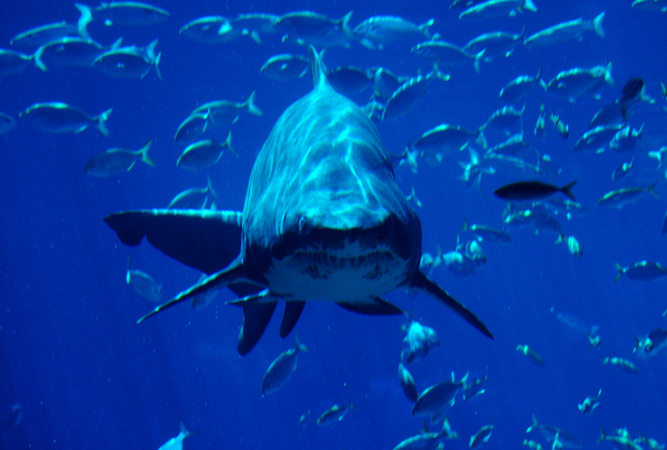 My elder son, however was on a never-ending quest, speeding down water slides and racing on tubes at about triple our amiable pace. Fortunately being only six, he was not yet ready (or allowed) for the kamikaze, a ridiculously steep water slide, which encouraged you to cross your legs for protection before launching off the precipice!

Our day was punctuated by three amazing shows, which we stumbled on quite by chance that are included in your combined ticket. Adjacent to the water world are two amphitheatres, the first of which housed the seal show, a bit of a spoof about pirates and treasure and, of course, a rather large seal.

My family, however, was far more impressed by the magnificent dolphin show, which we chose to watch not once but twice! Imagine my surprise when the opening performer was Gambit, a dolphin I remember from the Sea World of my childhood! The dolphins were simply awe inspiring and aside from some unnecessarily rather loud music, my sons were thrilled with their first exposure to real, live dolphins. 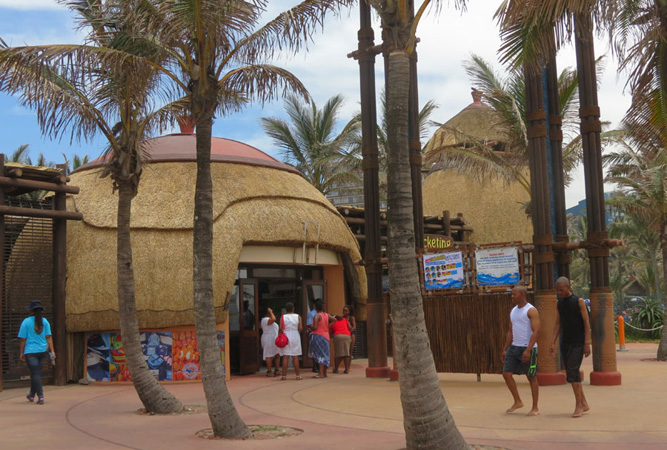 Being short of time, we took a bit of a whirlwind tour of the aquarium itself, which was unfortunately spoilt by our experience of Cape Town’s magnificent equivalent. What we did see was well laid out and varied, but did not somehow hold the same appeal that Cape Town’s does.

We didn’t come close to exploring the cargo shipwreck, penguin rookery or the ‘dangers of the deep’, but we certainly had our fill and would highly recommend uShaka as a day’s family excursion. Just ensure that you park at a car park close to the entrance, else you will be forced to make your way through the 11 250 square metres of unending shops and retail outlets, which you frankly don’t want to be forced to do on your return, after a long day with tired children!