The first indication that Dullstroom is the home of Anvil Ale, a micro brewery that produces artisinal beer exclusively for the town, is the unobtrusive sign, strategically placed at the entrance to the popular weekend town. Admittedly it is at ground level, but it is obvious enough that even I see it, and it indicates that at the other end of the main road is the promise of beer.

South African’s love their beer, and seeking out an ale house, particularly when on holiday, is something just about everyone who sees the sign is wont to do. So the garden of Anvil Ale House, even at half past three in the afternoon, is busy with patrons soaking up what rays of sun there are still to be found on this particularly chilly winter’s day. 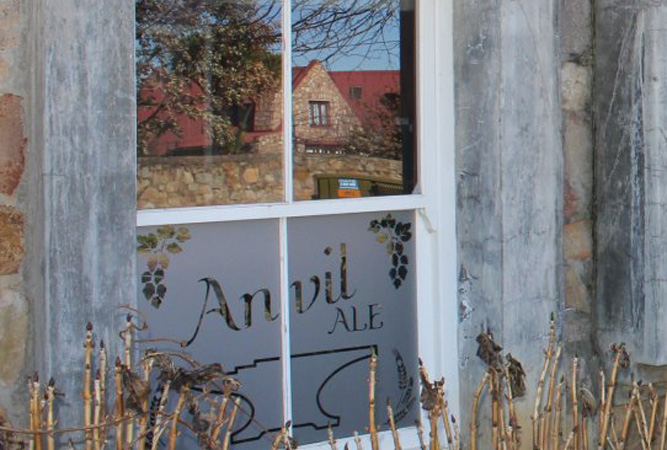 Anvil Ale House is beautiful. The stone building looks modern, yet also like something out of the south of France or Italy – creeper like growth on the walls and the stone work reminiscent of Europe. I later learn from the proprietor that it has been here some time and that he hand picked it especially for this venture. At the time it was not even on the market. Admittedly he and his wife then spent three years building, which goes some way to explain the modern feel and the brewery attached to the house.

Anvil Ale House is not your average pub. I gingerly approach the main door of the facility, anticipating the rowdy crowd, hunched around the bar, eyes riveted by a big screen television, the sounds that accompany sport and the smoke infested atmosphere sure to have me hightailing it out of there in seconds.

But I couldn’t have been more wrong. There isn’t a big screen in sight, and inside there is a sophisticated atmosphere that accompanies the average bistro. In a sense, it is, given that there is a wonderful menu available on black boards on the wall, assuring me that if I wanted to, I could partake in smoked trout and scrambled egg, wholesome vegetable soup, trout quiche, toasted pita and then a quick scan down to the bottom reveals boozy cake (more about that later). 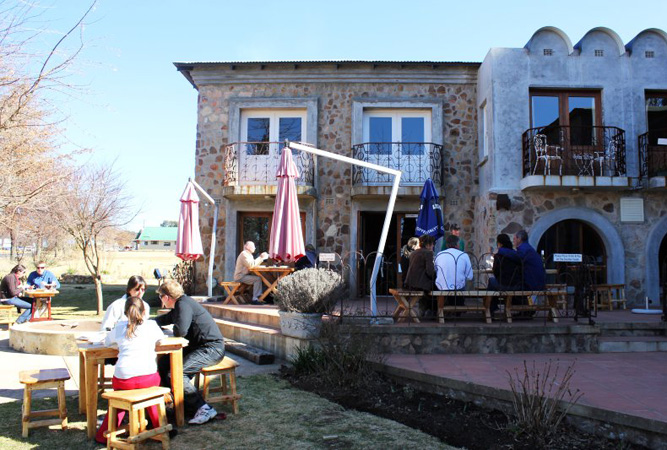 Theo de Beer doesn’t even appear to see the humour in the obvious correspondence of his name and vocation. My bark of laughter at seeing his business card doesn’t elicit any reaction from the little man behind the bar, whose warm and convivial welcome to me, as he draws a draft with a large foamy head for someone, means that I stay to find out more. But then, after thirty years’ of brewing history, he is probably immune to his name’s association with the very product he brews.

There is something of the modern day gnome about Theo. His pink cheeks, white hair and accompanying beard appear right at home in his brewery. His eyes twinkle merrily behind his glasses, and his incredible ability to swing from English into Afrikaans, and back again, has me guessing as to the origin of his home language. His wife is Afrikaans, also little, but more demure. She manages to balance two pairs of glasses – one on her head, the other on her nose – whilst she hurries back and forth, bringing beer, food and cake to all and sundry.

Despite the busy late-lunch-bordering-on-tea crowd, Theo takes the time to tell the story behind Anvil Ale. He used to run Hops Hollow brewery and guesthouse on the Long Tom Pass, on the Highlands Meander not far from Dullstroom. Tired and in search of something new, they packed, sold up and were on their way to New Zealand when the current recession hit, affecting any plans to leave the country.

The de Beers then took time out. Theo fondly describes it as a gap year, in which they travelled the country to visit all the places they wanted to see, before returning to Dullstroom as their home of choice, this venue specifically. Theo talks about using his past experience to influence this business. He finally has the chance to do it the way he would like to. 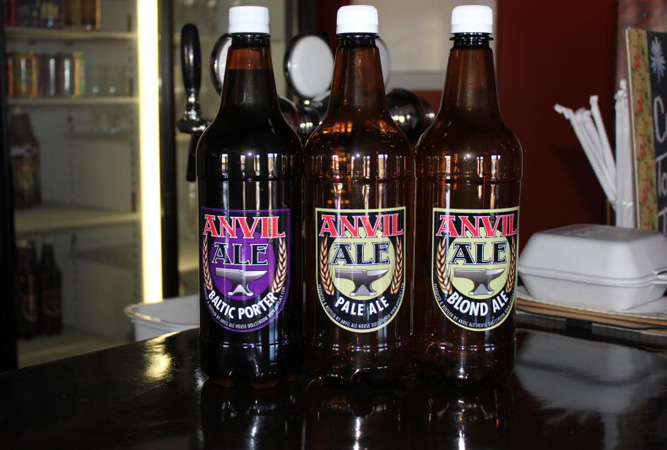 The brewery next door, which he later takes me to see, is small, yet it is what is termed a ‘1000 litre brewery’. In effect, I learn, it produces 800 litres at a time as you need to allow for roughly 200 litres of loss during the process. This is quite normal, he assures me, as when skimming the yeast off the top there is an inevitable loss of ale.

At the moment Theo spends between 19 and 25 days brewing his ale, whereafter he sells the bulk of it from his pub in draft form. The rest is bottled – a litre at a time. The ale house has only been open since April 2010 and there is a sense of excitement and a flush of newness about the place that makes people frequenting the ale house feel as though they have discovered something unique.

Which indeed they have. Theo brings across three tasters for us. He produces a blonde ale, a pale ale and a porter, which he calls his ‘girlie ale’ as women tend to prefer it. This probably has something to do with the low hop profile and the aftertaste of chocolate on the tongue. The blonde ale he describes as warm and the one most like the lager South Africans know as beer, whilst the pale ale is more fruity, malty in the mouth and bitter when you swallow.

I enjoy all three of them with my other half and five-year old, who gets his first taste of beer. On our way out we get a take away piece of Theo’s boozy cake to share. I can’t resist after Theo spends a few minutes talking about the way they make it on the premises, where it keeps for two weeks, due to the cake’s alcohol content.

They also produce a chocolate rum cake with cherries on top, soaked in brandy for a month. Their German sausage they get from a renowned butcher in Nelspruit, their cheese is a white cheddar and gouda from a cheesery in the next valley, and they make all four of their own relishes, including a mustard. So you can look forward to real local, home-made food. 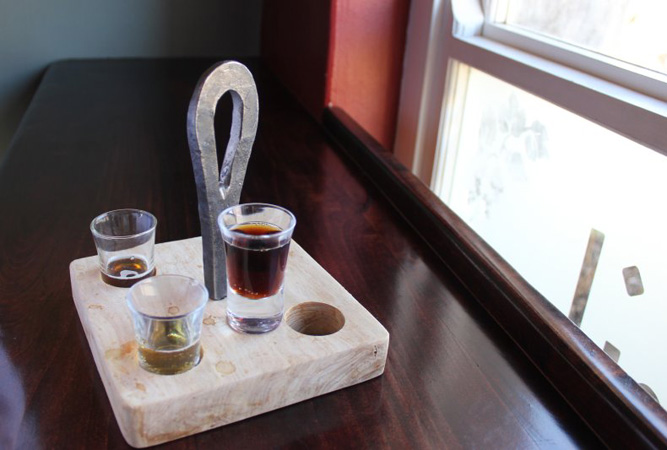 No guesses as to how well the brewery is going to do. With his intention to supply other restaurants in Dullstroom with bottles of his brew, Anvil Ale will soon be synonymous with the town and a reason alone to stop for lunch.

Anvil Brewery is on the right if you drive into Dullstroom from Lydenburg, or on your left on the other side of town, if you enter via Belfast.
Telephone: +27 (0)13 254-0197