It is not difficult to find exceptional scenic spots in Mpumalanga. This province is riddled with picture card moments designed to keep Instagrammers happy. The Blyde River Canyon, the province’s main draw card, is not its only geographical wonder. Others include: Bourke’s Luck Potholes, a long list of waterfalls, the Three Rondawels, and God’s Window.

But if you want to avoid the tourists, particularly in summer, then here are 20 secret scenic spots in Mpumalanga for those #instagram_sa #thisissouthafrica moments… 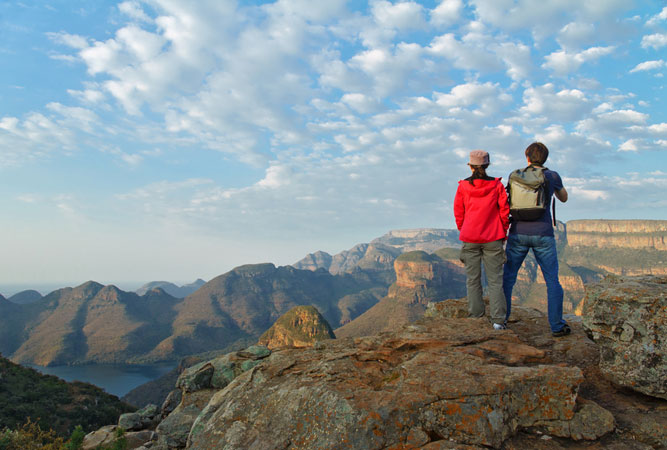 THE PLATEAU OVERLOOKING THE BARBERTON VALLEY AT KAAPSEHOOP

High up on the plateau above Nelspruit, alongside the picture-perfect mining town, Kaapsehoop  (a far more authentic experience to Pilgrim’s Rest – they discovered gold here even before Johannesburg’s gold rush) you can do a tour of Adams Calendar (apparently the oldest man-made structure on earth). From the stones the views out over the Barberton Valley are superb – views and mysticism rolled into one. 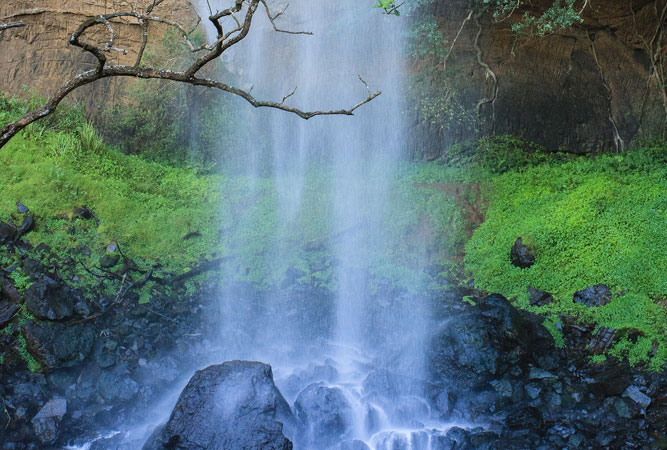 Drive up Dr Enos Mabuza Drive to the view point attraction at the dodecahedron (12 sided) reservoir in Steiltes. You can’t miss it as there is a giant soccer ball (affectionately known as the ‘Eye of Nelspruit’), a hangover from the 2010 Soccer World Cup. Stand on the viewing deck at sunrise, or sunset, for incredible panoramic views across Mbombela (wear shoes, though, as an unsettling amount of broken glass has been reported). 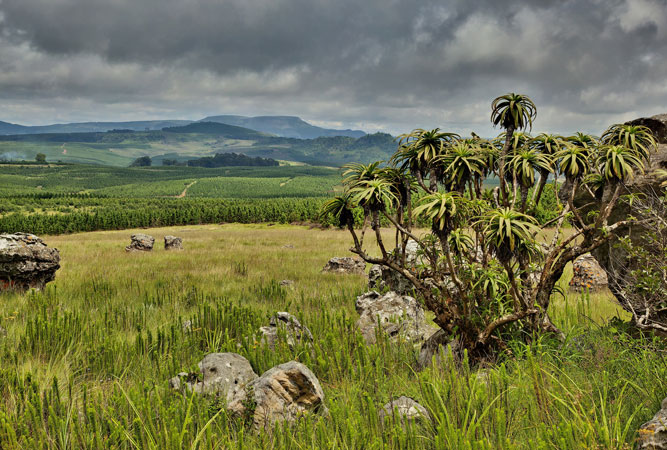 THE VIEW FROM THE TOP OF LISBON FALLS

The Lisbon Falls, with their 92 metre drop, is the highest waterfall in the Pilgrim’s Rest area. The viewing platform gives you great views over the falls. Find the falls where the R534 rejoins the R532, take a left and then right onto a gravel road. It’s well signposted and there is a small fee involved (most attractions involve a fee in Mpumalanga). 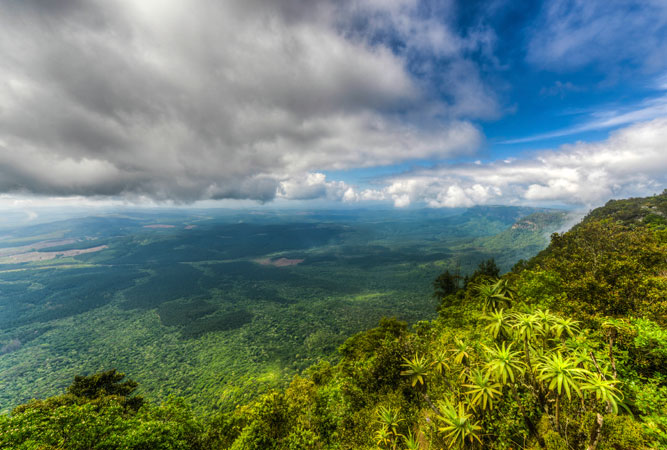 The views from Mountainlands Nature Reserve of plains, mountains, wildlife and sunsets (if you’re there at the right time) include 360 degree views. Find the reserve in the Makhonjwa Mountains close to Barberton. 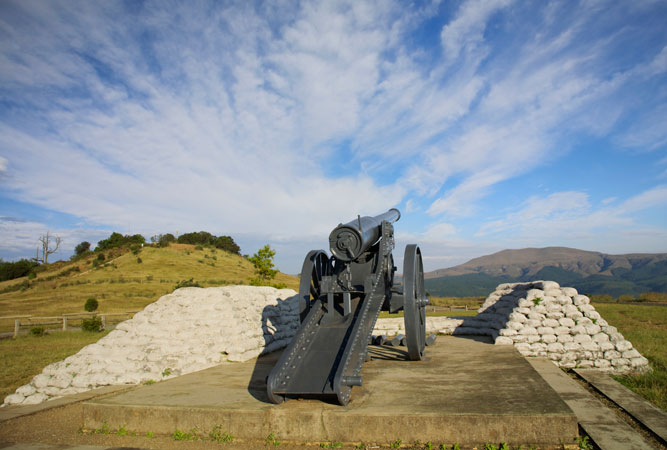 VIEWS FROM THE MAKHONJWA GEOTRAIL

The 38 km self-drive route heads up the Bulembu pass to Swaziland, from Barberton. Not only is there impressive scenery from this pass, but some of the rock formations in these mountains are from the Archaean period that dates back 3.2 to 3.57 billion years. Go now, before it becomes a popular route. 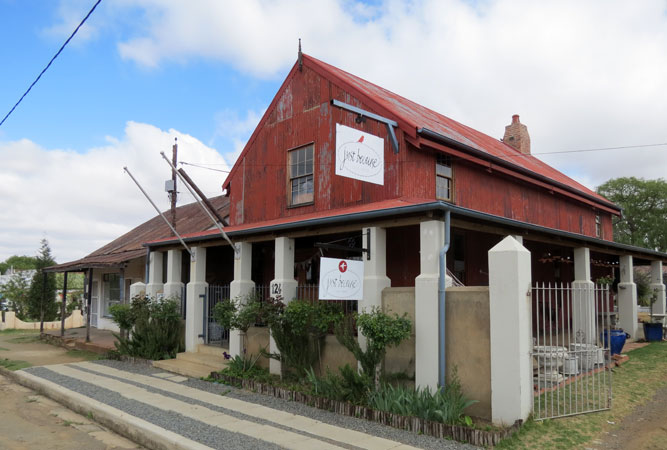 THE UNASSUMING BEAUTY OF WAKKERSTROOM

Close to the border with KZN, Wakkerstroom not only boasts some of the best birding in the province but it also has an authenticity that is difficult to find when most towns have been commercialised until they drop. Expect dirt roads, mountain views, townies and rustic appeal. 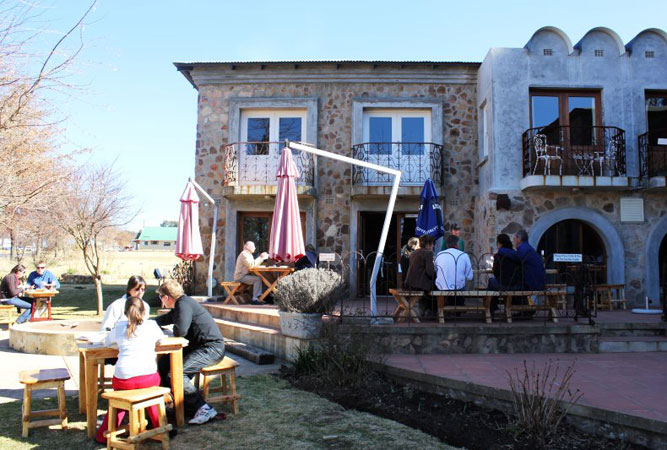 Just outside Dullstroom is the Tonteldoos Valley filled with old-style farms and dams perfect for flyfishing. It is tiny and might not feature much in tourist brochures, but its mountain and country views are just beautiful. 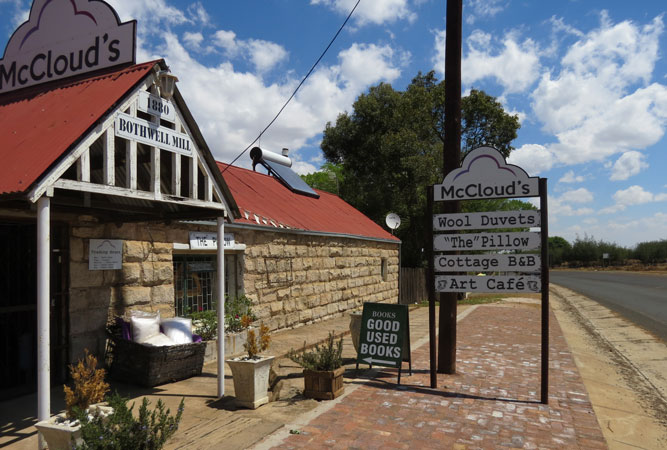 Pilgrim’s Rest, Sabie, Hazyview, Graskop, Dullstroom – everyone’s heard of them, but they are still worth visiting. And the countryside is gobsmackingly beautiful.

Mpumalanga’s best loved pass is also one of its most magnificent when it comes to scenery. The graceful, curvaceous descent from the Drakensberg escarpment, between Lydenburg and Sabie is, unsurprisingly, part of the Panorama Route. Good viewpoints are at 29.4 km and 31.4 km from Sabie. 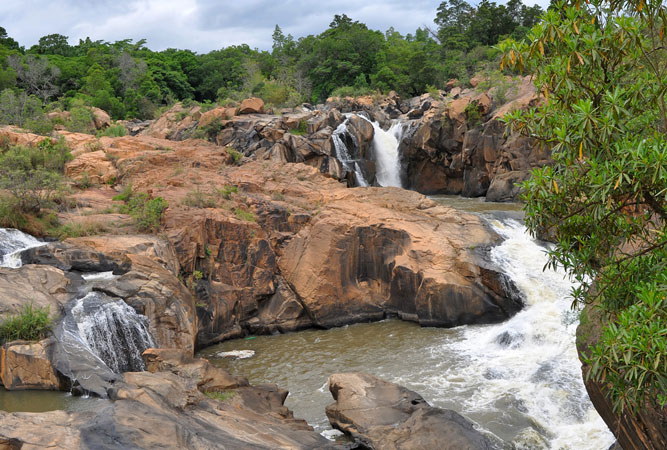 This is the highest viewpoint along the Panorama Route. Its 180 degree views over the escarpment are incredible. It is easy to reach as the parking area is right alongside the viewpoint.

A bit like Scotland, with a few African animals thrown in for good measure, this private game reserve is worth a visit. 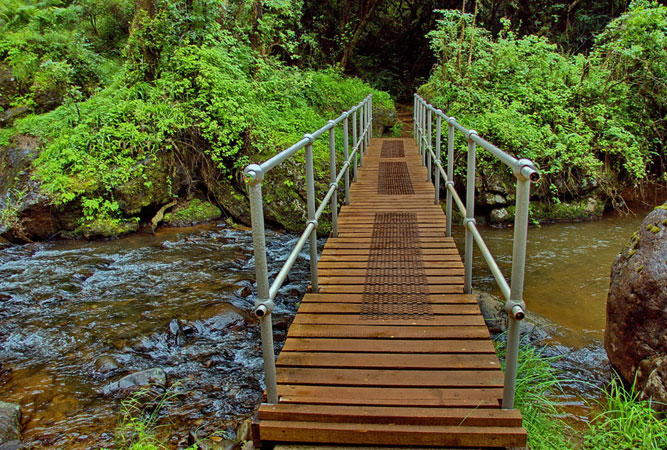 Park on the eastern side of the N4 tunnel (just after passing a turn-off to Emgwenya). Take a torch as you head through the NZASM tunnel as it is utterly dark (you cannot see your hand in front of your face). On the other side is a lookout point with a wooden deck overlooking the Elands River Falls. There is more often than not a guide to take you through the tunnel, for a fee. 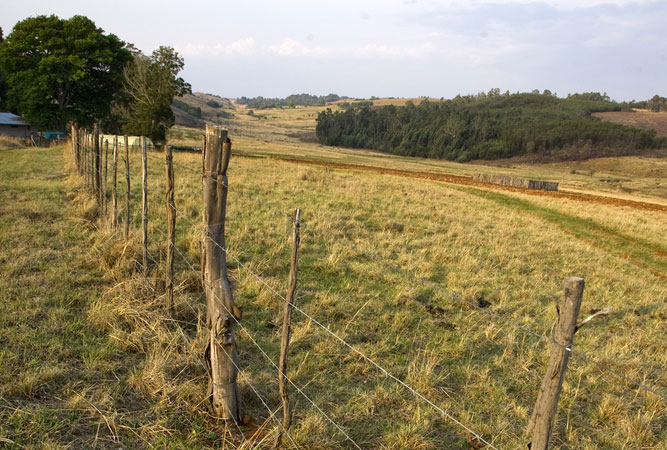 THE LAKELANDS OF CHRISSIESMEER

Comparable with the Lakelands of Cambria, Chrissiesmeer boasts over 270 protected pans within a 20 km radius. One photo moment after the next.

THE CHARMING TOWNS OF WATERVAL BOVEN AND WATERVAL-ONDER

Waterval Onder and Waterval Boven lie at the foot of the escarpment just east of Machadadorp. The highveld comes to a breathtaking end at Waterval Boven, dropping over the Mpumalanga Escarpment to the Lowveld below. Both towns are worth exploring. 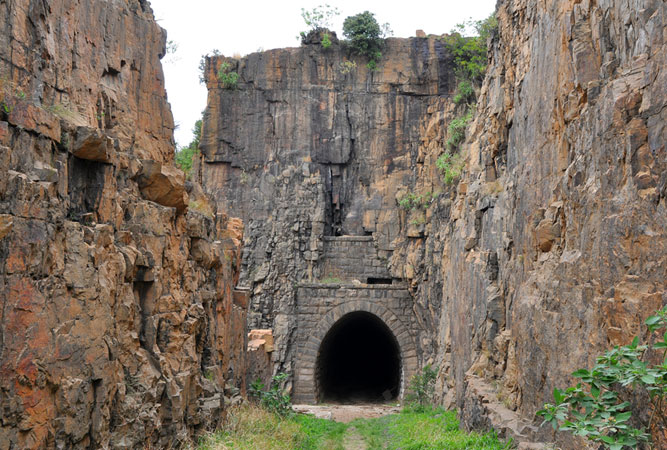 THE OTHER SIDE OF THE BLYDE RIVER CANYON

If you can reach the summit of Mariepskop Pass there are incredible views over the backside of the Three Rondawels with unusual views of Blyde River Canyon, Africa’s second largest canyon. But it isn’t an easy pass to navigate.

When at God’s Window persevere and head through the rain forest and cross the footbridges because the view from the top, south-east towards the Kruger National Park and Mozambique, is incredible. 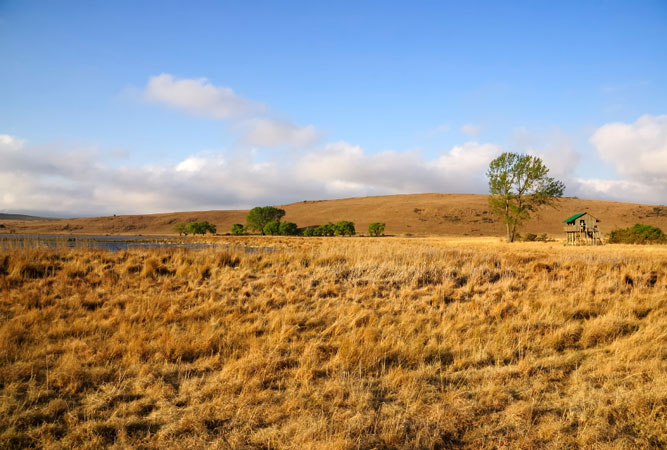 THE SCHOEMANSKLOOF HIGHWAY ON THE HIGHLANDS MEANDER

Schoemanskloof is a lot more than a route linking to Kruger and other Panorama Route towns. The 360 degree views over the Lowveld valley and Drakensberg Mountains, from the Schoemanskloof escarpment, are unbeatable.

Linking the Blyde River Canyon with Limpopo’s game reserves, this pass gives you a vantage point over a tufa waterfall on the northern side of the JG Strijdom Tunnel. Its best views, though, are on the northern end side of Morulaneng as the road curves north-east. Ahead are dramatic views of the mountains. 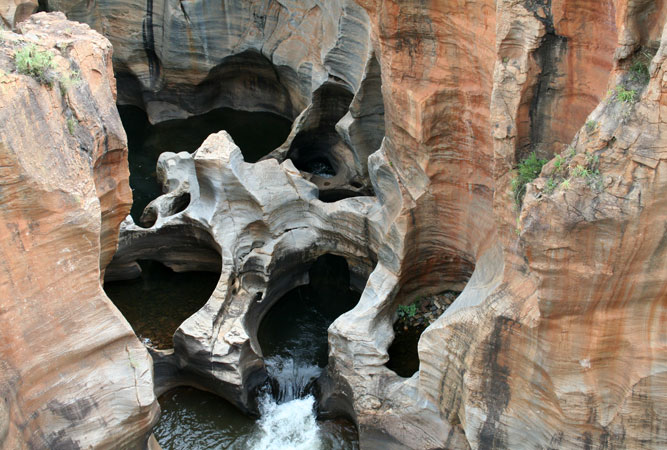 One does not anticipate a rainforest in the Lowveld. But there it is, in the botanical garden in Nelspruit; the views from the footbridge, between the gardens and the forest, over the river are beautiful. 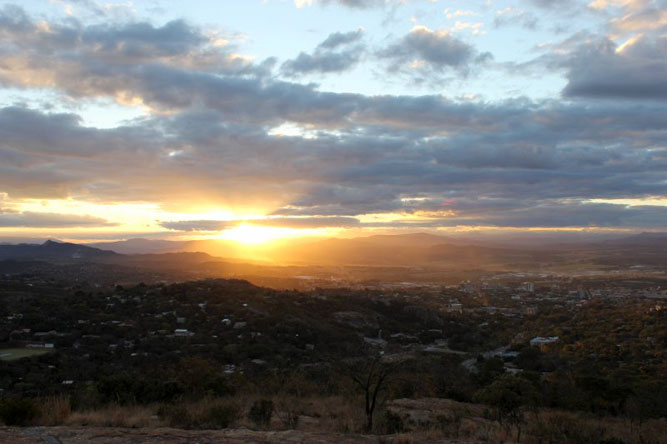