Now reading: 7 Reasons to Explore the Karoo Roggeveld between Britstown and Sutherland

The alternative route between Bloemfontein and Cape Town – A spate of idiosyncratic towns will enchant you, as will the incredible scenery, windmills, hospitable people, corbelled houses and star-strewn skies – the likes of which you’ve never experienced before.

As the crow flies it takes the average traveller 11 straight hours, and a rather deadened derriere, to travel between Cape Town and Bloemfontein.

The national road is easy enough to navigate despite the barrage of trucks, if mind-numbingly dull (the N1 circumnavigates most towns en route, and the road goes on forever with little variety).

However, the back roads through the Karoo hinterland are a different kettle of fish…

Adding only a further 200 km to your journey ( some of this on rather rough terrain, so factor in additional time) you can roadtrip the return leg, following the N12 through Kimberley before joining the R384 at Britstown, the R63 at Carnarvon and the R356 at Loxton.

7 Reasons to explore the Karoo Roggeveld between Britstown and Sutherland 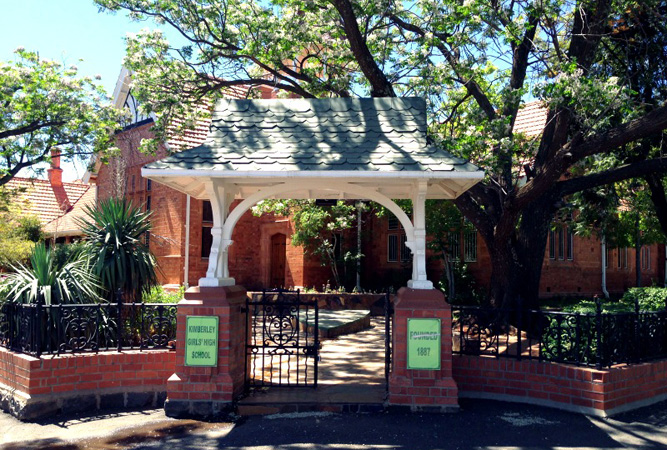 You’re right. Kimberley is not between Britstown and Sutherland. But to complete the picture of an alternative route from Bloemfontein, we highly recommend starting along the N12 to Kimberley – the Northern Cape’s biggest city. It emerged as one of the fastest-growing cities in the southern hemisphere at the time of the diamond rush. Today its historical tales, wide streets lined with Victorian mansions, battlefields, museums, game reserves, galleries, gardens and good food are a surprisingly inviting bundle to visitors to spend more than a couple of days exploring its offerings.

We recommend: overnight at the Kimberley Club (the family annexe across Currey Road is really good value for money) – this colonial building dates back to 1881 when the men of Kimberley wanted a club of their own along the lines of the London clubs – good food, company and drink. Rhodes was a major player in founding the club, and his statue (which has not yet ‘fallen’) stands in the pretty courtyard garden 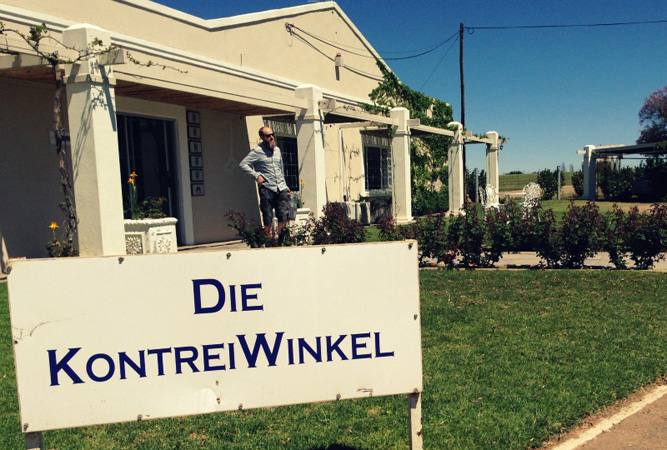 I’ll let you into a secret. On the very border of the Nama Karoo, just before you cross the Orange River outside the town of Hopetown (be sure to take a look at its unusual NG Church) there are a couple of silos full of popcorn (that’s the not yet popped variety).

And if you stop off under the trees that line the driveway to the Kontrei Winkel (country shop), long enough, you can stock up on different flavours of popcorn (most of them sweet), unpopped popcorn (supplied to the major cinemas of South Africa and overseas), local wines, honey, jams and preserves.

We recommend: It’s a great spot to pick up gifts to take home with you. 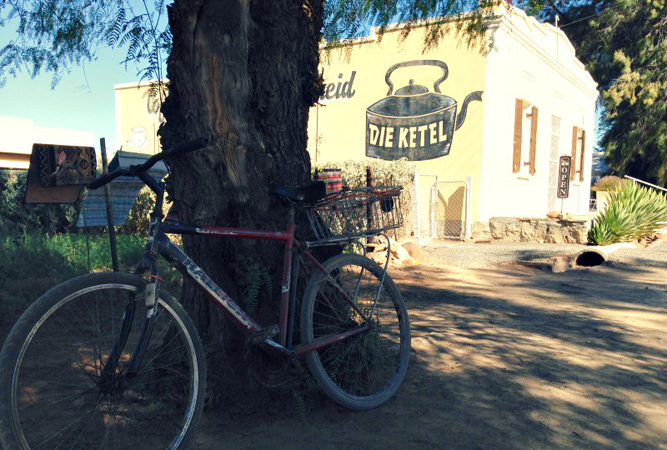 Vosburg and Loxton were, without doubt, our two greatest ‘discoveries’ in the Karoo hinterland. It might be in the middle of nowhere, but Vosburg is shady, its quaint gravel roads lined with historical homes, the Karoo Country Inn inviting, die Ketel Coffee Shop a perfect spot to while away time and the Vosburg Slaghuis & Algemene Handelaar a must-do.

We recommend: the caravan park looks shady and inviting 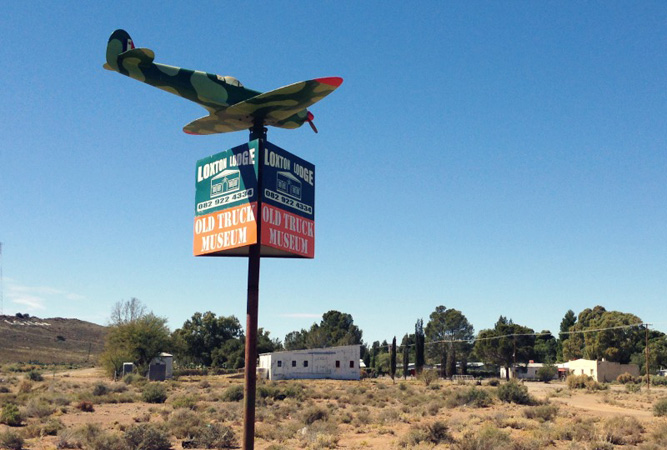 Everyone wishes they had a little house in Loxton. A few minutes in Die Rooi Granaat – the restaurant that doubles as the epicentre of Loxton if you follow the road that winds around the epic NG church – will have you longing to join the likes of author Deon Meyer (you’ll find an array of his books on the shelf to the right of the counter) who has a house here.

Get Heinrich Jansen, the eatery’s manager who moved here from Carnarvon, to wax lyrical in his deeply soothing voice about the Old Truck Museum with its vintage vehicles (most of them from WW II), and the Bavarian replica castle on the farm Kasteel (I kid you not). And I promise you won’t leave without at least one piece of the incredibly reasonably priced goats cheese that the Rooi Granaat’s farm owners produce. 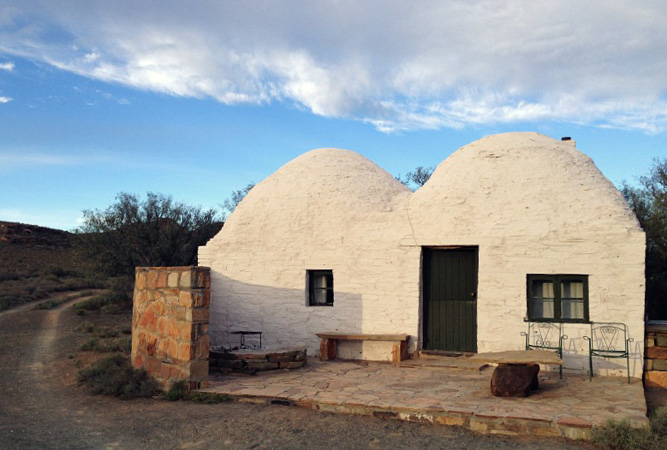 The first farmers to settle in this part of the Karoo, known as ‘hard man’s Karoo’, at the beginning fo the nineteenth century had as their initial homes single stone beehives, either circular or rectangular. The abundance of flat, stone slabs made them easy to build using a technique known as corbelling, similar to the builders of the tholos tombs of Mycenae (the jury is out as to just how this style of architecture made its way to the Karoo).

As a result, there are plenty of corbelled buildings in the Karoo, if you know where to look, between Fraserburg, Loxton, Carnarvon and Williston, on farms that end in ‘fontein’, ‘drift’ or ‘braak’ hinting at the underground springs that are the lifeblood of farmers out here.

We recommend: You can easily see an example of a corbelled house in Carnarvon and Fraserburg, but it’s far more exciting to sleep overnight in one on the farm Osfontein, just outside Loxton, en route to Fraserburg – See Osfontein Guest Farm. 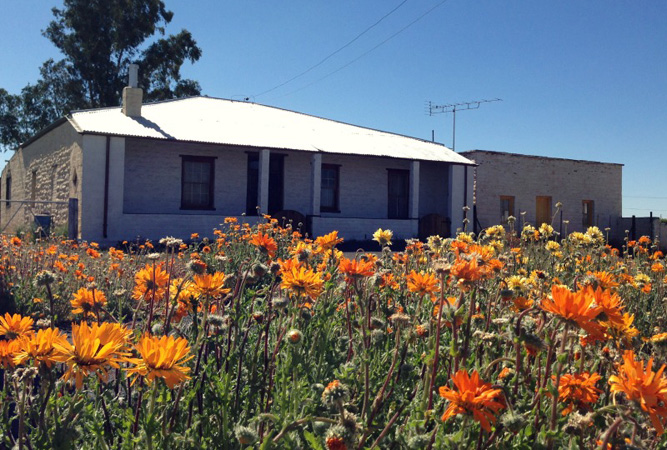 I must be honest and say that, on the face of it, Fraserburg doesn’t appear terribly exciting (unless you manage to catch the locals playing a game of dominoes whilst you fill up at the local garage!). There isn’t a restaurant or a shop to act as the town’s pivotal attraction, and it’s large enough to narrowly miss being ‘quaint’. However, chat to someone who lives here and your opinion rapidly changes.

There is dinosaur fossil evidence on a farm just outside town, a replica of a corbelled house right in town, the Victorian and Edwardian architecture is gorgeous (if in dire need of attention), and there are a couple of Goths (both artists) who give the town the curious flavour it deserves.

We recommend: KaRoux – the garage up on the hill is worth its weight in gold and will quickly fix a puncture (and you will have a puncture, for the gravel roads between Loxton, Fraserburg and Sutherland are pure slate) 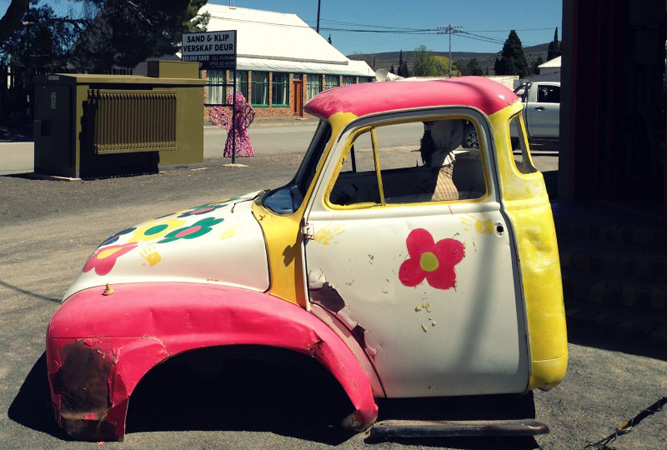 I can wax lyrical about Sutherland, but my voice will only be lost beneath the clamour of Capetonians who have already discovered the Roggeveld town on the tip of the Northern Cape, famous for its night skies.

We recommend: Sterland where Jurg Wagener will give you a highly entertaining rundown on the sky above your head in just under an hour, followed by a further magical hour following his laserpoint across the sky and peaking through one of his six telescopes trained on stars and the rings around Saturn. Your feet may be numb with cold, but you’ll be spellbound. 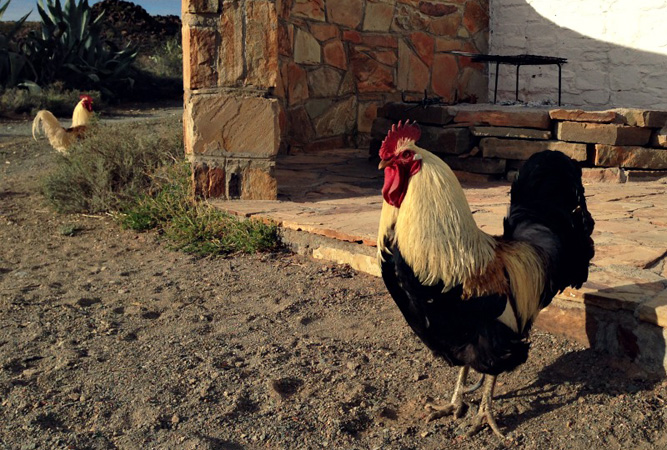