Now reading: A stay in Vermont

Tell people that you’re on your way to Vermont and many give you a puzzled response. They obviously are not expecting you to go all the way to America for the weekend, but whilst their brains are whizzing around trying to place the town on a map, I rescue them and explain that it lies close to Hermanus. The relief is palpable. 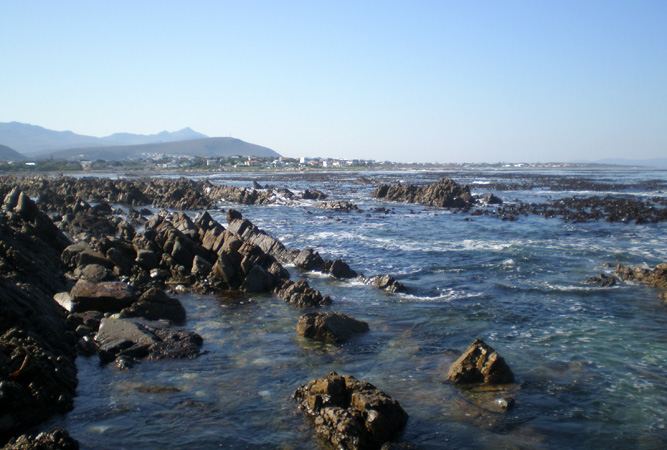 Acquaintances of ours have a wee cottage set in the heart of Vermont’s ‘old’ quarter. After staying in the town twice now, and familiarising myself with its streets, I have divided Vermont into the ‘old’ and ‘new’, or ‘east’ and ‘west’ quarters for my own reasons.

The east or old side is relatively conservative with smaller homes and pretty gardens, whilst the west suffers from a serious case of ‘my house is bigger than yours’ syndrome (although there are obvious exceptions).

One particularly unsavoury example, despite its rather pretty Gaudi-esque architecture, has deposited itself smack bang on one of the pathways down to the sea, blocking off the view for everyone else, and hogging the coastline for the length of the house – its doors and windows closed and curtained for the one occasion a year when the owners grace it with their presence, to marvel at the view they have secured for themselves. 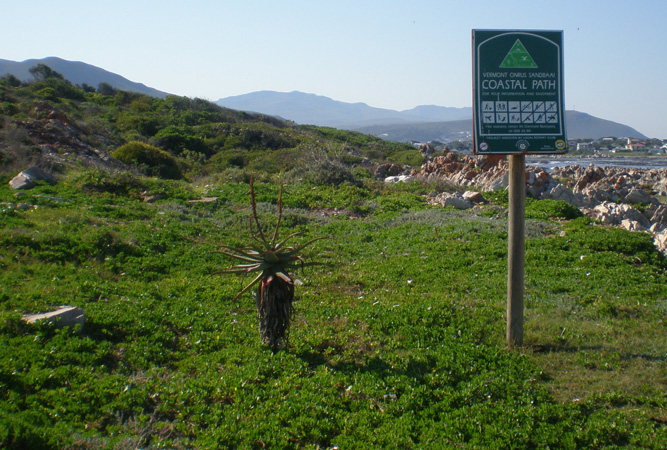 Despite my cynicism, Vermont is a lovely place to stay. It’s essentially a holiday village set on the shoreline right next door to the other seaside village of Onrus.Our little cottage is no bigger than a postage stamp, a little wooden hut with a couple of bedrooms built as a typical seaside holiday home, set in amongst a garden filled with fynbos – a perfect seaside escape, in other words.

There is a sign at the gate, in complete antithesis of the other side of Vermont, welcoming tortoises, small antelope and birds. There is little evidence, unfortunately, of any of these, although tortoises were initially part of the landscape, and we did see a little snake whilst we were there (much to my son’s excitement).

The coastline here is beautiful. Whilst Vermont does not have a beach (i.e. sandy stretches) as such, there are a series of green belts and gorgeous coastal paths that combine to provide a fynbos-rich stretch of coastline, interspersed with tidal pools – perfect for little ones. 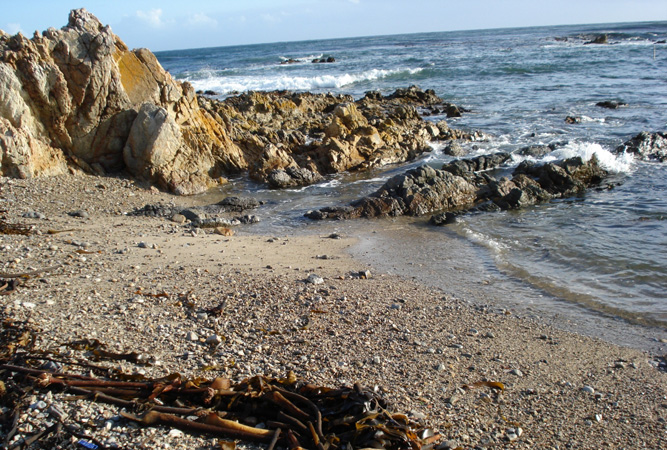 The seaside is rife with the calls of seabirds, and if you’re there at a quieter time of year there is little to disturb you, whilst the pools and alcoves of beach are generally sheltered from the wind, as we discovered on our last visit when the wind howled for the duration of our stay.

We stayed a few moments walk from the shoreline, which we managed to do at least once a day, despite the weather. The green belts provide dense fynbos and a place for incredible spiders to nest.

The tidal pool areas are usually thick with kelp, sea sponges and shells, if you like that kind of thing, but if you don’t, head along the coastal paths towards Onrus as the beach there has a large, sandy stretch and is popular for swimming and surfing. At busy times of year, such as Easter, it’s probably better to head there really early as it becomes something of a bun fight to find parking and a spot on the sand.

One comes to Vermont to unwind, or to see whales, as Hermanus is literally around the corner, but don’t expect a typical seaside resort feel. 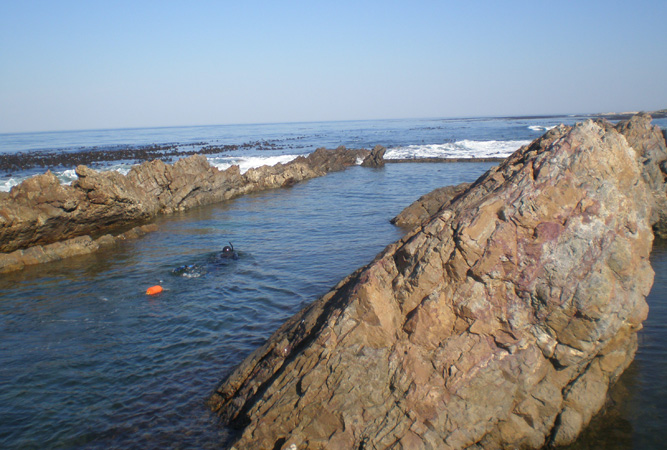 The green belts and coastal paths have prevented development right on the shoreline and, with your back to the ostentation of some of the houses close to the sea, you are at one with nature. This is a space in which to go on long melancholy walks, sit and ponder whilst watching the waves crash against the rocks, or somewhere simply to read for hours.

Behind one is the Onrust Mountain, a beautiful backdrop to the village that probably serves as the source of the village’s name – ‘mont vert’ means ‘green mountain’.

There is a small mall just on turning into Vermont (you drive right past it on the left if you’re on your way to Onrus) but it serves as a sign that the town is essentially a holiday locale, with only a 7 Eleven, post office, local pub and chemist to choose from. 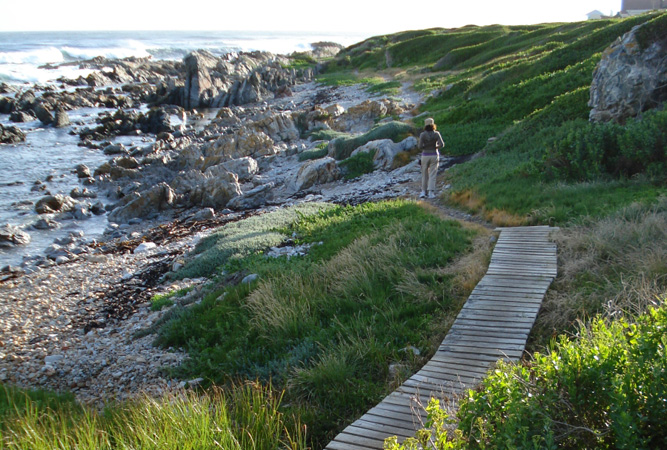 There is one hidden gem – head upstairs to the internet café where there is a second-hand bookshop that is a lifesaver if you’re there without reading material!

If you’re on your way through to Hermanus whilst staying in Vermont (and being in Vermont is a more sane option over the Whale Festival when accommodation in Hermanus is stretched to its limits) drive part of the way via Onrus after which the road joins again with the R43. Onrus is a more settled, unsullied version of Vermont.

It’s obviously been here longer and there are fewer examples of ostentatiousness. If anything, Onrus is a haven for artists and the like, and there are more permanent residents than in Vermont. 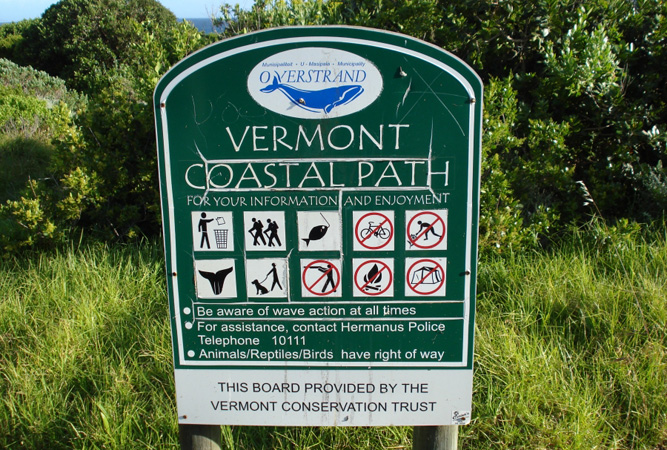 Just off the main road, at the De Wet Hall in Roos Street in Onrus is a monthly local market that looks worth attending. It’s well supported by the local community and is an eclectic mix of school-style craft stalls. But if it’s markets you’re after then head off to the weekly Fernkloof Farmers market in Hermanus in the Montessori School grounds, or the Food and Wine Market at the Hermanuspietersfontein Wine Cellar – you won’t be disappointed.

Also take time to visit Vermont’s salt pan. Set away from the beach en route out of the town, the body of water lies set against the backdrop of the mountain and is a wonderful place to spot birds, including a population of flamingos.