Now reading: Addis in Cape Town – eating with your hands is all it’s cut out to be

As you have no doubt derived from the rather obvious name of the restaurant, Addis in Cape Town is a bit of Ethiopia bang smack in the middle of Cape Town.

I don’t usually do ‘theme’ restaurants, particularly those aimed at tourists. To be honest, I don’t get to eat out at night much at all – funny how that stops when the ‘bundle of joy’ arrives, and stays stopped until he’s left home, although I’m hoping I get out and about before then… another twenty odd years without culture will do my head in. 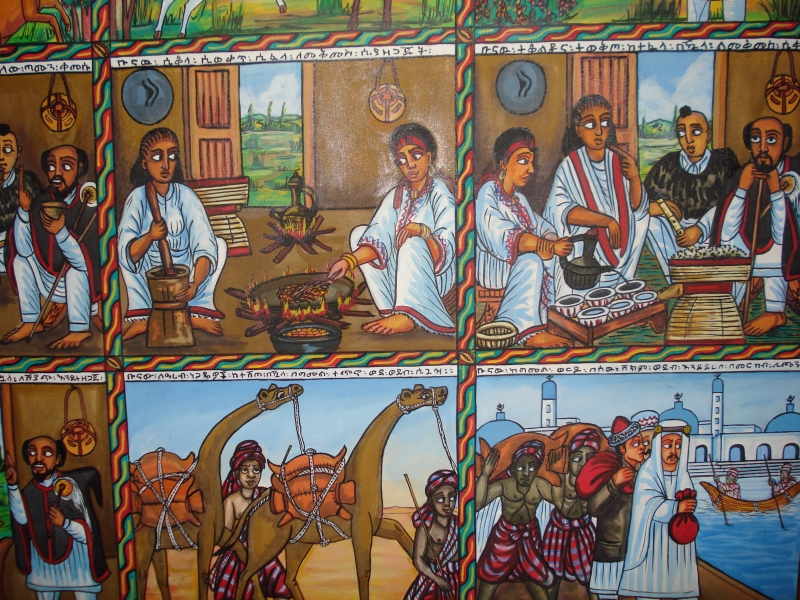 But with mom-in-law down, a night on the town was obligatory, and Long Street was the obvious choice (Long Street is where the night life is, if Camps Bay isn’t your thing, which it isn’t). Even if Addis is technically just around the corner from Long Street, on Church Street, it has incredible views of Long Street, and blends right on in with the other trendy eateries …

The other major attraction is that you eat with your hands, and you can order a 100 per cent vegan meal (the vegans amongst you will be pleased to hear). In fact, the menu comes with meat and vegan options. But more on that later.

Addis in Cape Town is Ethiopian cuisine along the same concept as Addis in Dar, which you’ll find at number 35 Ursino, just off Migombani Street in Dar Es Salaam (obviously). It’s been touted as a favourite amongst tourists when in Dar, and despite being described as a ‘little-known and out of the way restaurant’, serves superb food (this is all hear-say, having never been in Dar Es Salaam). 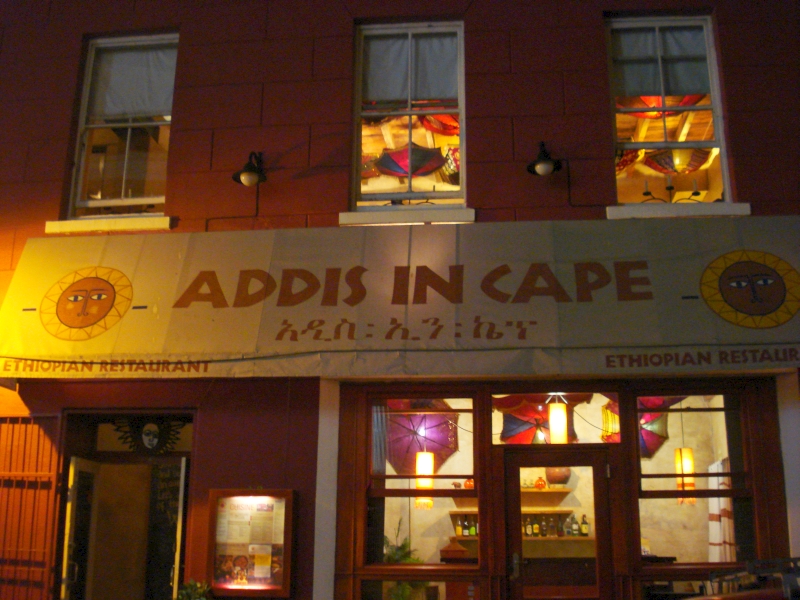 At Addis in Cape you are met at the door by a very black gentleman in pointy black shoes and a black suit, reminiscent of a bouncer. Except that he isn’t. Nor is he Ethiopian. I’d hazard a guess and say that he was Nigerian. Along the same theme, our waiter turned out to be from the Congo and spoke with a gorgeously smooth French accent. But was definitely not Ethiopian.

In fact, the only Ethiopian I managed to see all night was one of the waitresses and the owner, Senait Mekonnen, who slipped in to read her email in the little two-by-two room squashed in next to the unisex loo (I know, because I happened to pass her en route to use the facilities, by that stage more than a little wobbly on my feet – food takes a while to arrive).

And the guy with pointy shoes is rather necessary. There are at least four floors of eating space in this beautiful old Cape Dutch style building complete with polished Oregon floorboards, laid out with a series of low basket tables known as mesobs. 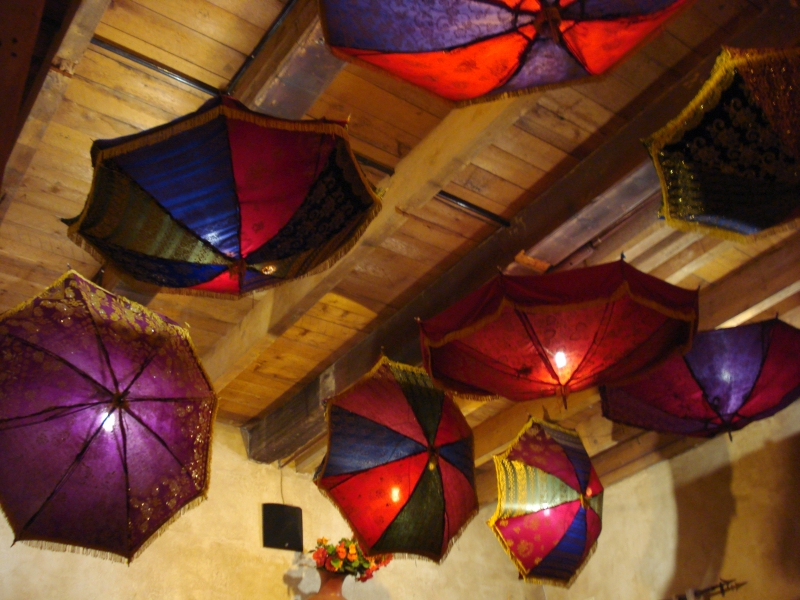 Infront of these you sit in low slung wooden chairs that allow for rather inelegant slumping. We followed him up to the very top floor, which was already humming. Considering this was a Tuesday evening, it was doing relatively well. I would imagine that over weekends, the floors are all full.

But we were the only Capetonians. Andy, our waiter, was ecstatic to meet us. We were his first locals, or so he said. The bar area was strewn with traditional carpet umbrellas that hang suspended from the ceiling, the walls adorned with Ethiopian art, and we were quickly to learn that the whole evening comes in a formula that promotes social interaction and introduces one to a whole new style of food and eating.

In Ethiopia there is an eating ritual of breaking injera and sharing food around a common plate. It’s a way to share friendship and loyalty. People eat with their fingers, using a small portion of injera to wrap around a mouthful of food. The term wot describes a dipping sauce, which is prepared using any variety of vegetables or meat, whilst berbere is a traditional seasoning made from chilli pepper and other spices. But by the time you’ve made your way through the menu, you’ll get the gist of it. 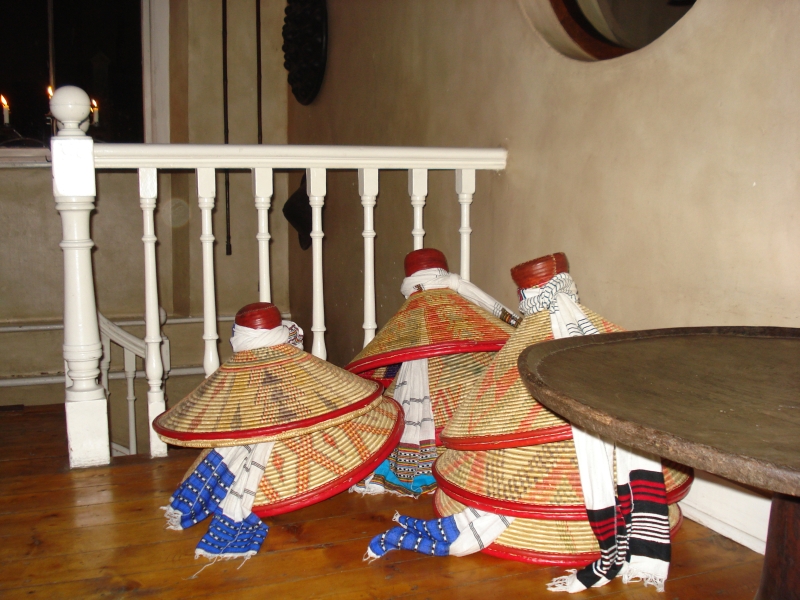 Meals come in a communal dish served on a large round pancake (more injera ). All of the meals are Ethiopian and come as part of a set menu with names like Doro Wot (chicken marinated in fresh lime juice), Yebeg Alicha Wot (lamb sautéed and slow cooked with garlic, ginger, onions, turmeric), Misir Wot (split lentils sautéed with onions and garlic with Berbere), Mushroom Wot etc.

We each selected two half dishes and in this way managed to sample four items on the menu. Before these arrived, served together with what looked like a series of crépe bandages but which were actually injera – large, thin pancakes (although they look like pancakes, this is staple food regarded as bread) usually made from a grain called Teff, a miracle grain that is high in iron and isn’t available in Cape Town so they were made of buckwheat, sorghum and rice, I think – we washed our hands beneath a flow of warm water brought to our table in gorgeous beaten silver pitchers with accompanying bowl.

The food, when at last it arrived, was gorgeous. Traditionally Ethiopian food is rich in herbs and spices. It’s colourful and tastes excellent, which it should, considering that two Ethiopian chefs produce the goods. The accompanying injera is there to use as knife, fork and spoon, which can get a little tricky if one of the dishes is slightly sloppy. 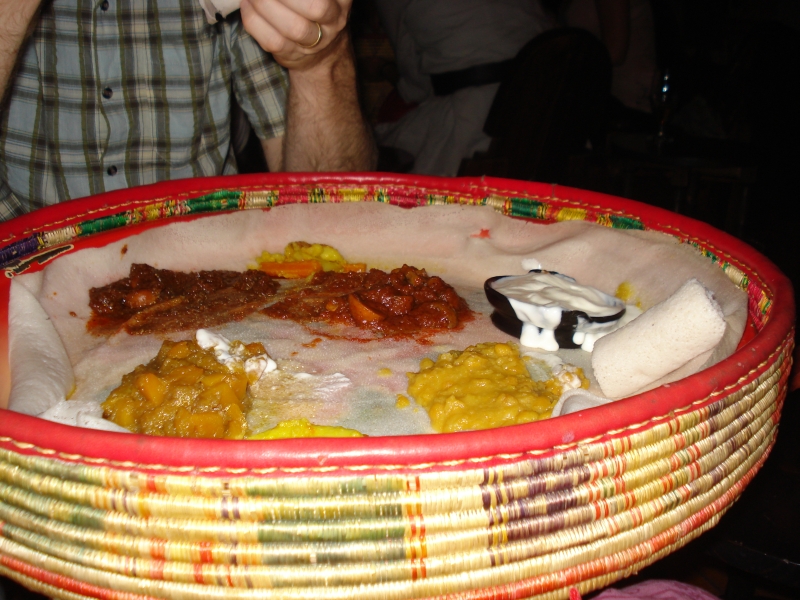 Put it this way, don’t take anyone infront of whom you don’t want to appear awkward. This said, it can also be a wonderful ‘bonding’ moment, and the table next to ours appeared to be just this – a group of colleagues out at their Christmas do (it took them until the food arrived before they unwound).

Injera is apparently popular not only in Ethiopia but also Eritrea and Somalia. I loved this form of bread and wish that we ate more in this way. The spices used in our meal are said to come directly from Ethiopia, they’re not local derivatives.

The more of you there are at the table, the more food there is to try, and I watched as other larger groups tucked in to an array of different coloured and spiced food. I’d highly recommend their set menu that includes starters, mains, desserts and coffee. And I believe the coffee is an experience all its own – authentic Ethiopian style. 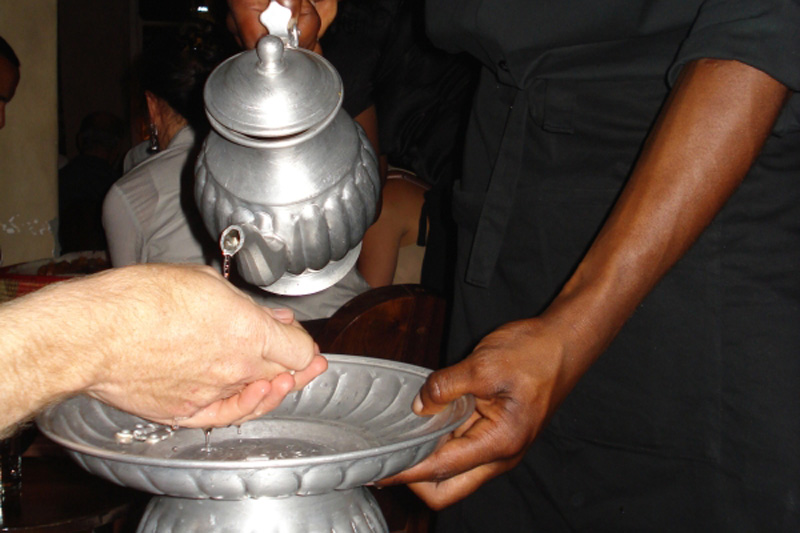