Now reading: Jolly up the Klein River on the African Queen

We spent part of this past weekend in Hermanus for a friend’s birthday and on Saturday afternoon found ourselves on the way to Stanford for a jolly up the Klein River on the African Queen!

The African Queen is a double decker boat and was first launched nearly ten years ago.  The lower deck features braai facilities, wooden tables and seats up to 16 people.  The upper deck is equipped with plastic furniture, seats up to 24 people and has an area of shade …

There are three daily trips, one at 10am, another at 2.00pm (this is the voyage we opted for) and the last which departs at 6pm with the average trip lasting between two and three hours.

We had a wonderful afternoon – the general itinerary is to cruise slowly up the river for an hour before dropping anchor (!) at which point the fires have been lit and the braais are ready for use.  The opportunity is there for river swimming (in fact the African Queen has four or five tractor tubes which float behind the boat should you fancy getting pulled slowly upstream!).

The weather wasn’t quite warm enough for me to have a dip but I could think of nothing better on a stinking hot summer’s day.  After an hour or so of swimming and braaing the boat makes its way back to the launching spot.  All in all a superb three hours on the river!

The source of the Klein River is on Deip Gat farm in the Hemel-en-Aarde Valley.  It flows behind the Kein River Mountains before carrying on its journey through the Akkedisberg Pass and 15km joins the Hermanus lagoon before it flows into the sea. 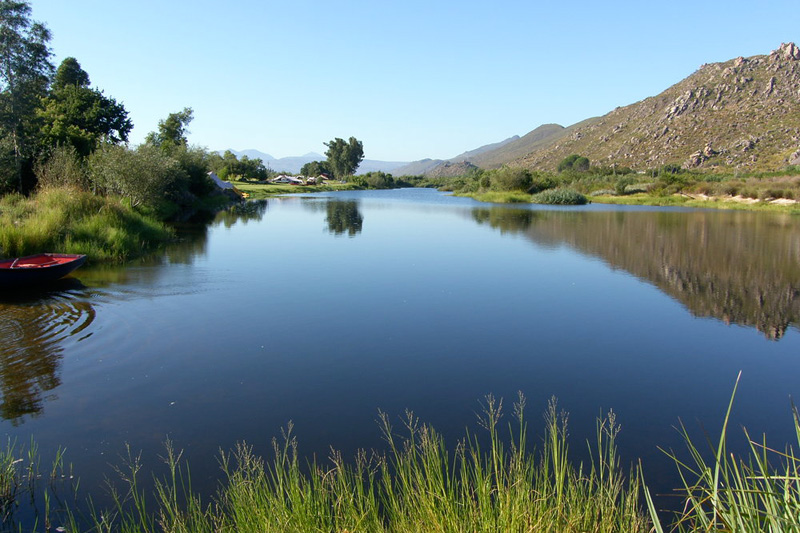 The river features more than 127 kinds of birds as well as a variety of salt and fresh water fish including bass, otters, terrapins and various other indigenous animals.

The season runs from 1 September to 31 May every year and the African Queen really is worth booking on so the next time you are in Stanford or Hermanus give them a call.
Telephone: +27 (0)28 341-0929