Now reading: Barrydale – much to explore

Arriving in Barrydale is like a breath of fresh air. Nothing quite prepares you for its uniquely arty bent or prettiness, other than the fact that people are talking about it. And one soon understands why. Barrydale is quirky, home to at least two cob houses, dry shale walls, loads of restaurants, the infamous Karoo hotel, a labyrinth, hot springs, a community of both English and Afrikaans speaking artists, a fair number of French, German, Spanish and Italian residents, vineyards, a group of hand weavers, and views to die for. 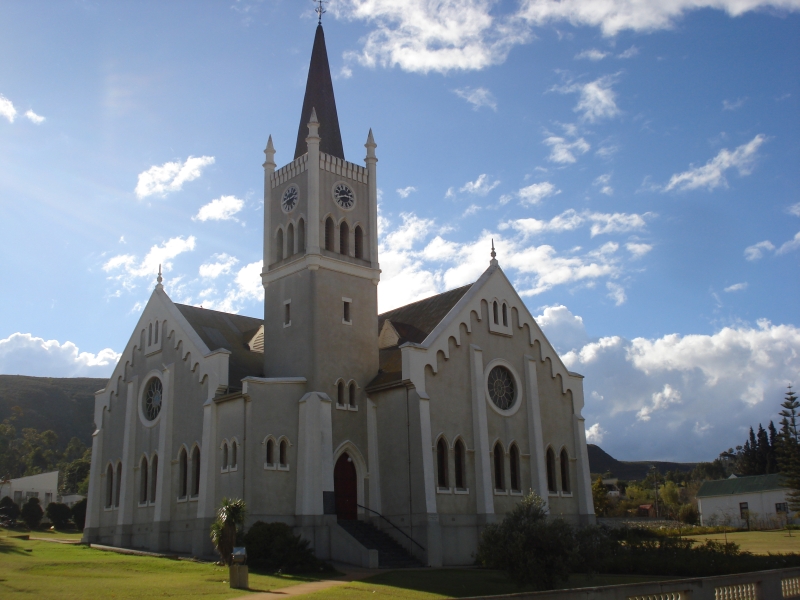 The town lies in the lush Tradouw valley, at the northern end of the Tradouws Pass surrounded by the Langeberg and Swartberg Mountains, roughly an hour from Montagu. Drive a little way out of town and orchards filled with apple, pear, orange, apricot, fig and peach trees dominate the farmlands, the odd derelict barn or farm building next to a windmill a sign that you’re in the Karoo and that average summer heat reaches up to 35°C.

In winter there is a harsher beauty here. The light is constantly lucid and autumnal, the skies are an incredible blue and the fruit trees devoid of their leaves.

Except that Barrydale, despite marketing to the contrary, does not ‘officially’ lie in the Little Karoo.  For one it has a higher rainfall than the Karoo, and geographically and geologically it has unique features of its own. Some refer to it instead as a valley between the Karoo and the coastal belt. It falls between the cracks, so to speak, in more ways than one. 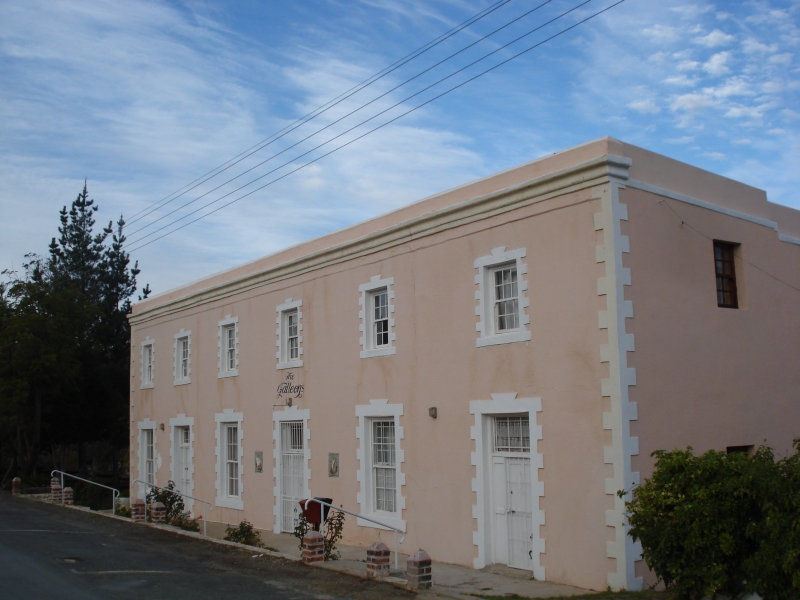 Once upon a time, this was Kannaland, rich in Bushman/Khoisan history, before settlers made their way here after 1700. People of the Attaqua tribe of Hottentots travelled through the Langeberg in the area today known as the Tradouw (women’s footpath) Poort and they had kraals on the other side of the mountain in today’s town of Suurbraak, the quaint missionary town.

As with just about any little town in the country, the town’s history dates back to the building of the local community’s church in roughly 1878, right where the R62 and the R324 connect.

But it was only later in 1940 that a cooperative was formed for the local wine farmers, and today the town is flourishing, not least because, despite there being no chemist, doctor, pharmacy or vet (unless you count the vet that visits the town once a month) people like to retire here, or at least intend living here for as long as they can.

As often happens in small towns, we bump into someone we know from Cape Town. Kim has been living here now for nigh on two years and she loves it. She describes the atmosphere here as something that grips you. She says artists here are inspired and their work is prolific. Somehow the surrounds engender an urge to create. And you have to, to make ends meet.

The local smithy is also a chef and artist, other artists have ‘day jobs’ and their art is displayed in local galleries or at the market in Montagu. It’s how you survive in a small town. That and scaling down. But it doesn’t seem to deter anyone. 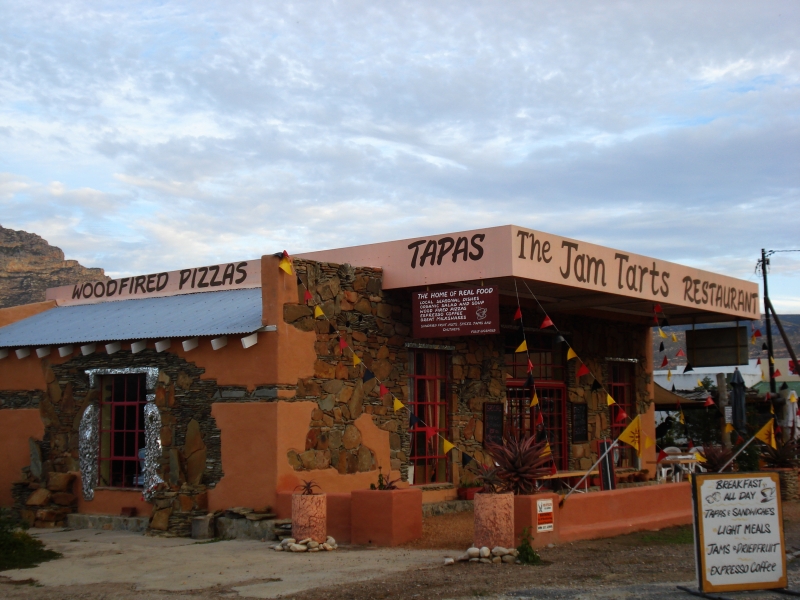 And there is a burgeoning economy if the number of shops, restaurants and Barrydale accommodation venues are anything to go by. On our first day exploring the streets of Barrydale, we end up at Mud. It turns out that this is the baby of Carol Morris, who is also responsible for establishing Barrydale’s hand weavers, which we are due to visit the following day. (see our article here: Fetching cotton rugs – Barrydale hand weavers).

But at the time we don’t connect the dots. She’s busy putting last minute details to the outside of the gallery/restaurant and we’re catching up with our acquaintance around a mug of hot chocolate and a very warm fire.

Mud is about to relaunch. Its heyday as a local art gallery was over three years ago now. In the interim it’s been a nursery and now Carol is taking over again and relaunching it as a combination art and metal works gallery and restaurant, serving up meals after dark, which most restaurants around here fail to do, apparently, and dishing out home cooked takeaways for those who aren’t keen on cooking.

And its name? Mud is called mud because it’s made predominantly with clay and locally sourced materials. The house was designed by Andy Horn, an architect well known amongst the sustainable and green living crowd in Cape Town for his cob and strawbale home designs and built in 2002. 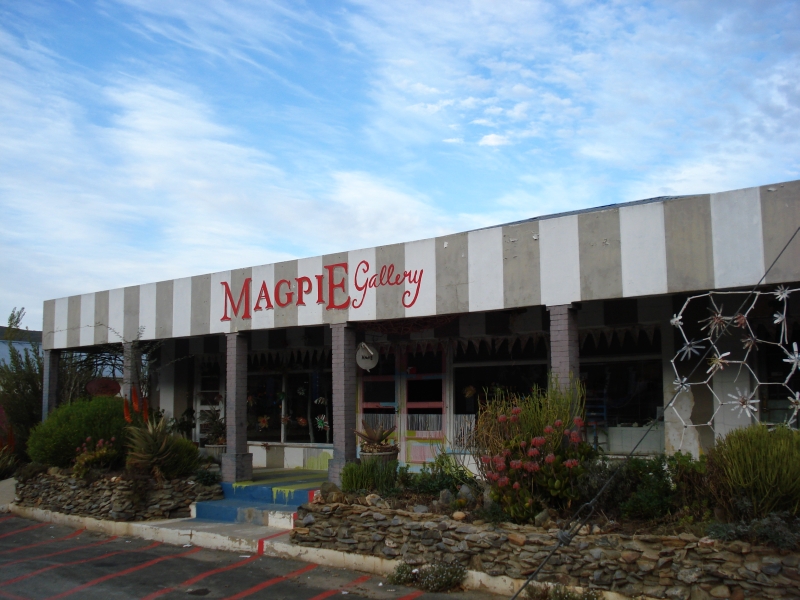 Right next door to Mud is Herman van Wyk’s studio, where he makes a series of chandeliers, candelabras, one-off door hinges and handles, tables and chairs all from metal and wood. He’s also busy cooking up a bowl of pasta for the opening night of Mud, or something about launching the incredible fireplace on display in the gallery that he is reputed to have made.

But we leave after our mug of hot chocolate intent on establishing a fire of our own in our accommodation.

Times are not all that easy. Shops come and go. Mary’s Barn is now Back to Roots, an eclectic mix of local arts and crafts, collectables and gifts, a hairdresser, take aways, pizzas, and an internet café. It’s filled with wonderful clothing, baskets, shoes and other items that make shopping here worth a stop. The place is run by Cassie, who is also a local graphic designer, and hires out a cob house that she partly owns, in which we are staying.

A little lower in Barrydale is the Barrydale Karoo hotel, which of course comes with a story that made me want to investigate the hotel’s inner workings, except that by the time we got there on Monday morning, it was closed! Back in time the hotel used to be what locals smilingly describe as ‘viciously gay friendly’ – there were parts of the hotel to which you were not privy if you were straight, and you certainly didn’t stay there with your children. 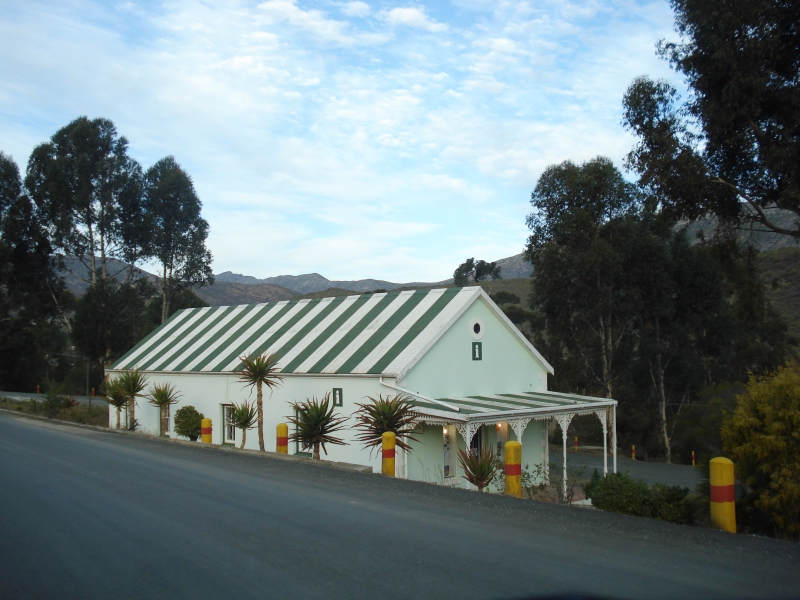 But the lushness of the décor and the exceptional plush fabric, statues, incredible ambience and the very ‘presentation’ of the place put the Karoo Hotel on the map.

Then there was a fire, and the hotel underwent a revamp to something a little more ‘low key’, although not before the fire devastated doorway had served as a backdrop to a pristinely set, white tablecloth bedecked table – quite a tableau if you can picture it – immediately after the fire. Speak about making the most of a moment! (you can understand why I wanted to visit).

There is enough in Barrydale to warrant at least a five-day visit. Less than this and you’ll miss out on the labyrinth at Lemoenshoek, the Warmwaterberg Spa where natural hot springs are the source of relaxation, countless local walks, plenty of little local shops worth exploring, numerous restaurants for breakfast and lunch, and the Barrydale Spring Festival in October (or thereabouts).