You are here / South Africa Travel News / Destinations / Western Cape / 8 Stops On The Road To The Biedouw Valley, And Why It Will Change Your Life

Now reading: 8 Stops On The Road To The Biedouw Valley, And Why It Will Change Your Life

The beautiful, relatively unknown Biedouw Valley lies hidden beyond the Cederberg Mountains on the other side of the Pakhuis Pass.

To reach it involves a scenic two-and-a-half hour drive from Cape Town to Clanwilliam before heading east on the R364 through the Cederberg Wilderness Area, up the graceful Pakhuis Pass, down the other side and then off a gravel road that takes you to Wupperthal.

You can also access the valley from the Northern Cape (Tankwa Karoo National Park), but the Biedouw River spends most of its time in flood, when it does flow, inhibiting any access from that side of the valley. Even 4×4 vehicles only manage the crossing after October, provided the rains haven’t been too severe…

The Biedouw Valley is tranquil, off-the-beaten-track and renowned for its spring flowers (August/September) and quaint farm houses.

No-one visits unless they’re there for the flowers, or to get to Enjo Nature Farm. The Van der Merwe’s run the only rooibos farm in the valley – Biedouw Valley Rooibos – which you can buy at your local Pick n Pay, or from reception at Enjo.

But I digress. For the route into the Biedouw Valley is beautiful in its own right. 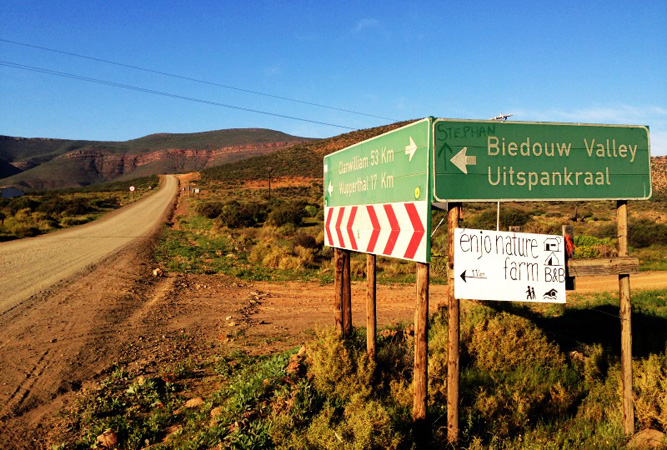 Here are 8 stops on the road …

Clanwilliam is a sizeable town on the Olifants River, just north of Citrusdal, on the north western edge of the Cederberg Mountains.

The incessant road works between the Piekenierskloof Pass and Clanwilliam are virtually over, and the end result is smooth driving and easy access to town that makes a road trip a pleasure.

Clanwilliam is one of the oldest towns in the country with a run of national monuments, a museum, access to hiking and rock art trails, water sport activities on the dam, and the local Spar and Checkers are good places to do last minute food runs.

It’s also a good base from which to hike the Cederberg Heritage Route. 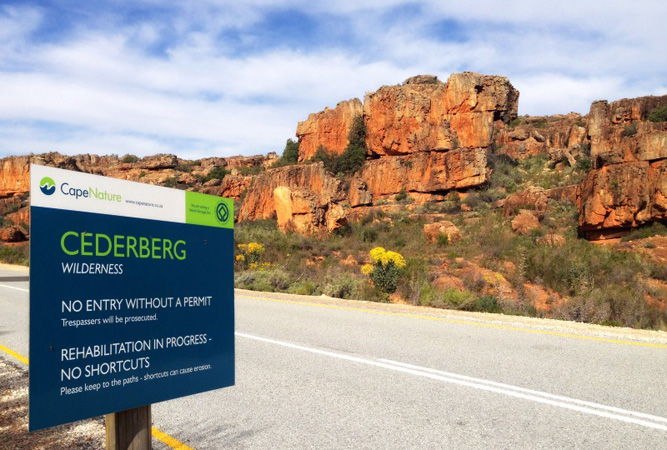 There are various access points to the Cederberg Wilderness Area that include the one just outside of Clanwilliam, before the Pakhuis Pass.

There is a car park to the right of the R364 just as one enters the wilderness, not even 15 minutes’ from Clanwilliam, where one can leave one’s car.

Like the Drakensberg in KwaZulu Natal and the Wolkberg Wilderness Area in Limpopo, the Cederberg Wilderness gives total freedom to the hiker with 300 kilometres of well maintained hiking trails and plenty of rock climbing opportunities. 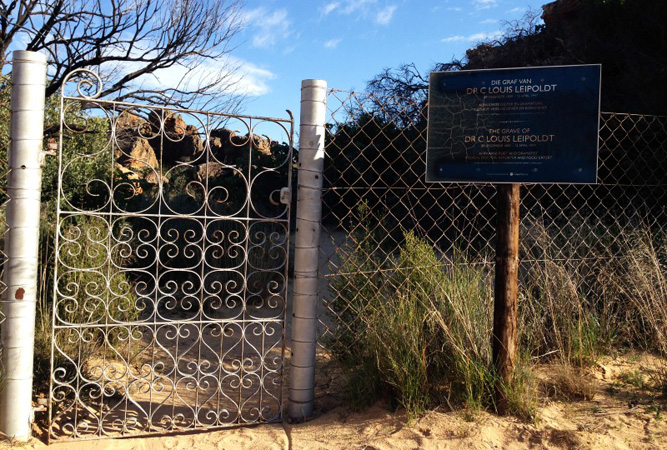 Just after passing the first Cederberg Wilderness sign on the R364 from Clanwilliam is the grave of Louis Leipoldt, South Africa’s well loved poet, writer of novels, plays, children’s books and cook books (our original Jamie Oliver). He was also a medical doctor.

The grandson of the Rhenish missionary who founded Wupperthal, not far from here, his grave lies in a cave-like opening just off the road.

Although he died in Cape Town, where he worked as a paediatrician, his ashes were scattered here because of his deep love for the Hantam. 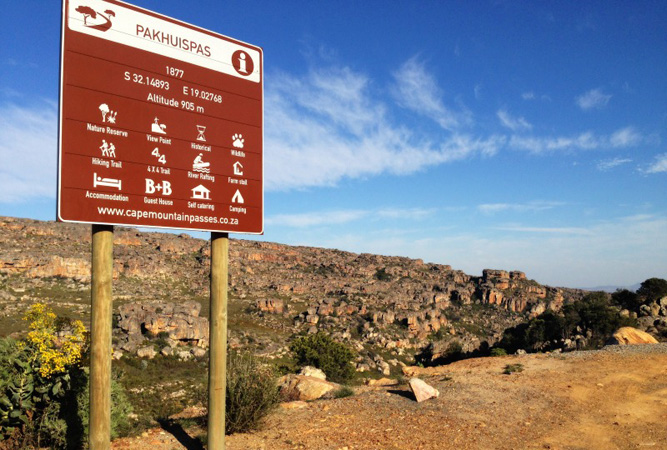 Pakhuis means ‘packing shed’ in Afrikaans and no doubt refers to the packing of citrus fruit grown prolifically in the area (perhaps there was a packing shed on this road). The pass starts just outside Clanwilliam and connects the town to the Karoo towns of Calvinia and Nieuwoudtville.

Yet another road engineered by Thomas Bain (he was to plan and construct over 900 km of roads and mountain passes, most of them in the now Western Cape), Pakhuis Pass is tarred all the way and is scenically rich and strategically not difficult to drive.

It ends at the first farmhouse at the bottom of Agter Pakhuis, but along its length are several places to stay, access to the Cederberg Wilderness Area, two grave sites and sightings of the three peaks of Charity, Hope and Faith (at the very top of the pass at 905 metres above sea level).

The Pakhuis Pass is famous for its access to San rock art. 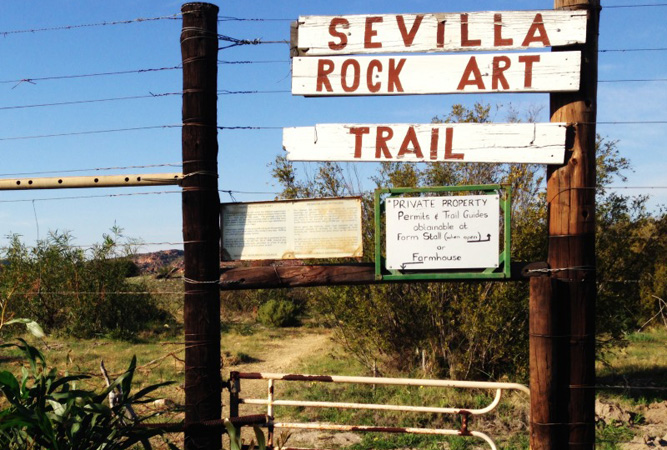 Just beyond Traveller’s Rest is a prominent sign tacked to a gate (on your right if Clanwilliam is behind you) on the Pakhuis Pass indicating the start of the Sevilla Rock Art Trail.

Since you need a permit it is best to phone Traveller’s Rest ahead of time to avoid disappointment, although you can take a chance and merely stop – it is close enough to Clanwilliam (36 km).

The 4 km trail winds along the Brandewyn River, stopping at 9 rock art sites – paintings left by the San people who lived in the area for thousands of years.

The well-regarded, self-guided trail is not difficult to walk, and an information pamphlet from the farmstall will explain each of the paintings.

Traveller’s Rest’s restaurant (open between 9am and 6pm) serves up local traditional food like mutton stew and roosterkoek – perfect for after your walk. Get going early on hot days. 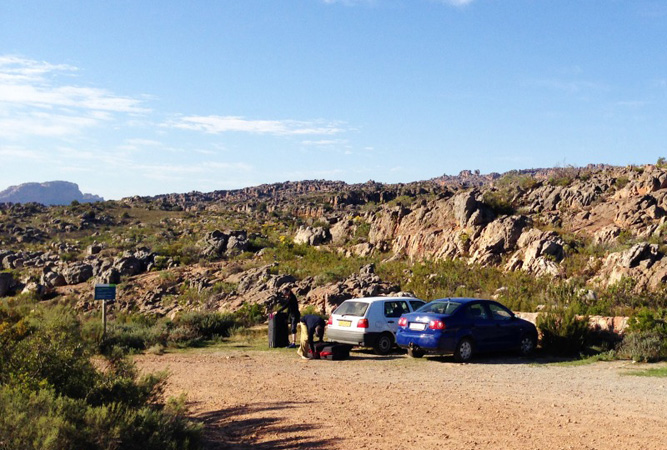 Bushmans Kloof Wilderness Reserve and Retreat also has a rock art site. The reserve is a National Heritage Site for its incredible San paintings and access to the flora of the region.

San paintings, artefacts, jewellery, bags, dolls and dancing sticks, as well as photographs introduce visitors to the ancient ways of the hunter-gatherer that lived here thousands of years ago.

Rave reviews by visitors who have stayed in the reserve overnight make this a must-do. 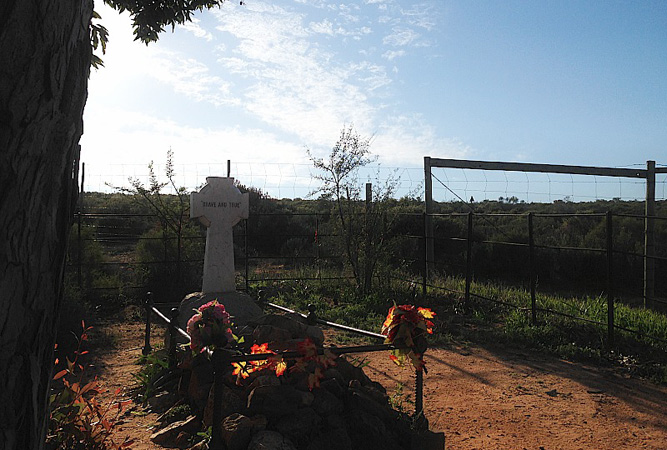 You can barely make out the words on the Celtic cross headstone on the Englishman’s Grave, but for those who are interested it says: ‘In sacred and loving memory of Graham Vinicombe Winchester Clowes Leutenant 1st Battn. The Gordon Highlanders … killed in action near this spot on 30th January 1901′.

The grave lies in the valley behind the Pakhuis Mountains, erected as a memorial by his mother (he was only 21 years old when he died). 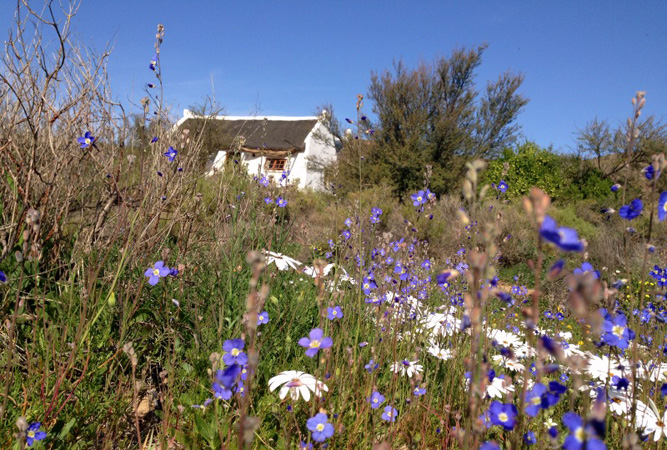 Just after the Englishman’s Grave is a right to Wupperthal and the Biedouw Valley.

The gravel road, concreted where it is most steep, takes one down a series of s-bends that make up the Hoek se Berg Pass. A series of farm gates bring you into the valley, where a left turn, just after Mertenshof Farm, will take you to Enjo Nature Farm. Enjo is a breath of fresh air.

Whilst we were there, in early July, the spring flowers were already beginning to carpet the area, the river was in full flow, and the quiet of the surrounding mountains, the songs of birds and the daily visits by farm dogs and horses, left us sure that this is one of the most peaceful and beautiful places to which to escape. Well worth the four hour drive!

A stay of as little as two days, in the beautiful and remote Biedouw Valley, will have you restored and peaceful in no time.

This drive to the valley beyond the Cederberg Mountains is an escape into another world where time stands still, bird song wakes you, and the moon and her stars watch over you whilst you sleep.