Now reading: Biodiversity Garden – a wonderful visit in the shadow of the stadium

Remember the slight furore about the Common in Green Point, Cape Town round about the end of 2006, when plans for the new stadium became common knowledge? Locals of the neighbourhood jumped up and down at the mention of the word ‘stadium’, siting terms like ‘white elephant’ and ‘destructive to the environment’, which at the time, I thought pretty valid.

In reality, what used to be an admittedly green, but slightly dangerous, local bergie hangout is now a safe place for everyone. The Cape Town stadium has now earned a place in the hearts of (most) Capetonians (pulling huge crowds not only to watch soccer but also to hear the likes of U2), and there is also a park for children, a space in which to picnic, and a beautiful Biodiversity Showcase Garden. 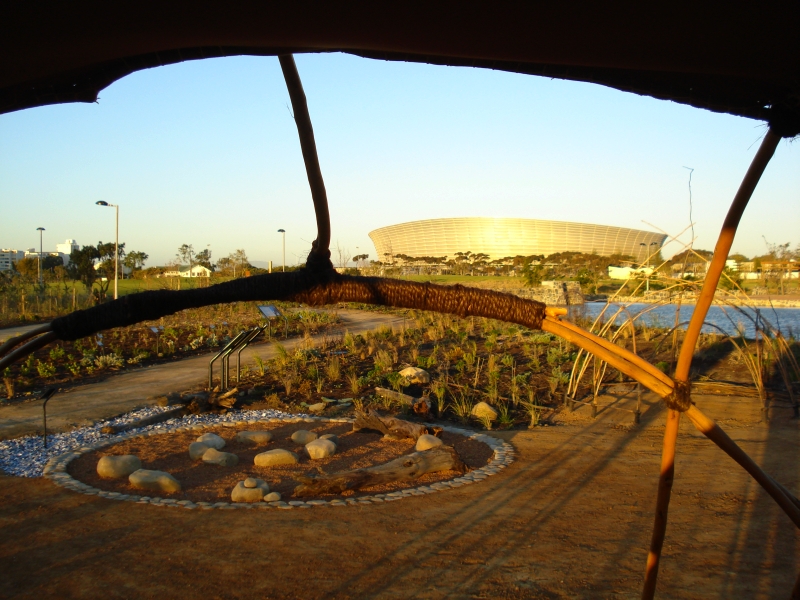 So, whilst the former common is no longer wild looking, the area that isn’t a stadium is not only being used for play – you can cycle, run, walk (new, bricked pathways make this easier), use the space for exhibitions, outdoor markets and events – but also to educate on the environment.

And before you groan, roll your eyes and assume that it’s a couple of rather boring fynbos exhibits with accompanying boards, it is anything but. The Biodiversity Showcase Garden is a creation that the City of Cape Town has been working on quietly for well over two years. Green Point Park only opened late last year to the public and includes the garden, which in a relatively tiny space, manages to feature over 300 local plants, combining them with a series of interactive signage, displays, art work, sculptures and beauty. 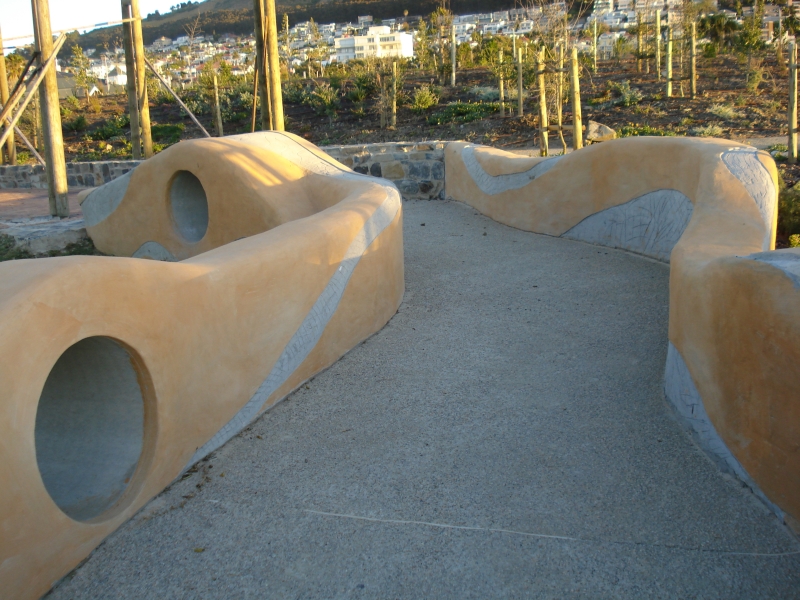 It’s a space to visit again and again. And you can, given that the entrance is free, and in summer the garden is open from 7am to 7pm.

Have a look out for large wire sculptures, like the organic circular stone and wire combination by Michael Methven, made to represent the long horn indigenous cattle, more commonly known as Sanga, and giant wire art by Streetwires, like the more than life-size lady bird – it gives the bug that eats other bugs (namely aphids) far more credibility seeing it at this size!

We packed a picnic late one slightly less windy afternoon, and headed down to Green Point. I love this part of Cape Town. The once slightly-down-at-heel Main Road has gone from seedy/trendy to bustling cosmopolitan overnight, joining the rest of Green Point and its pretty, cottage-lined side roads and stylish night life. But there are other attractions to the right of Main Road, besides the icon that is the stadium. 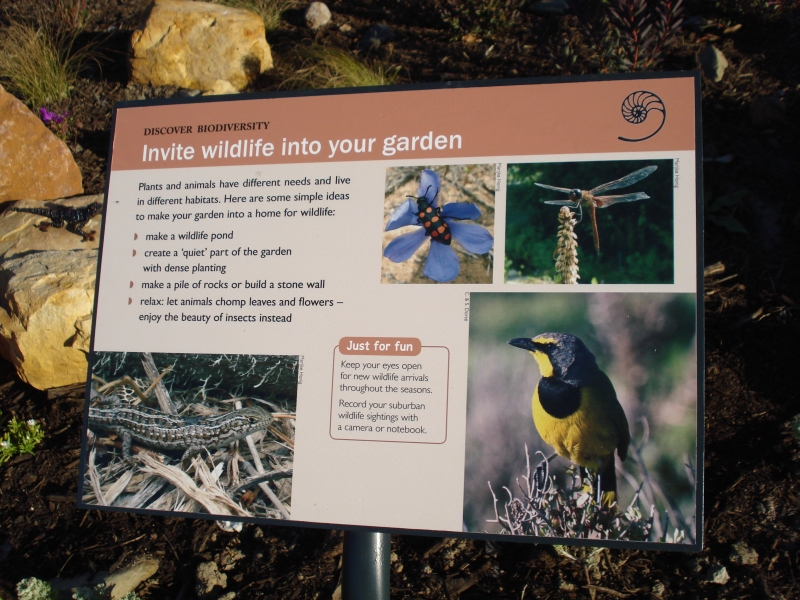 The first thing that struck me as we entered the Biodiversity Showcase Garden is that it’s not really a garden. It’s not about rose bushes and pretty herbaceous borders, which the term ‘garden’ brings to mind. This is a real experience.

As my son raced ahead immediately to explore the myriad pathways and interesting sculptures – he was allowed to touch for once – I just drank in the views. Where else is there an iconic mountain, stadium and lighthouse (okay, calling Mouille Point’s lighthouse iconic is possibly pushing the envelope, but it is an unusual shape, isn’t it?) that indicates the presence of the ocean, all in the same view?

Right infront of me stood a giant geodesic dome that reminded me of a very similar dome used in permaculture to house chickens – more commonly called chicken domes. 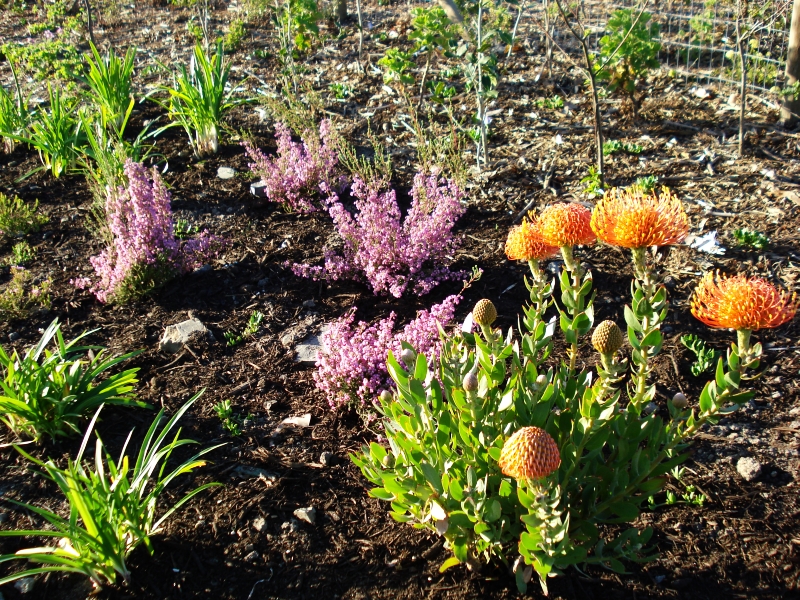 Whilst I’m not sure that in this particular garden it is meant to denote more than the original Khoikhoi traditional matjieshuis (you see a number of them later in the people and plants section of the garden). But in your own garden the idea is that your chickens are temproarily housed in a similar but smaller dome, which you can move around your circular vegetable beds, so that you get to choose where the chickens peck and poo.

To put this in perspective, my husband’s bamboo, geodesic dome, which does NOT house any chickens as the finer details of the dome are well, not quite there, lies abandoned in a derelect bed in our garden at home. Not to place too finer point on this already contentious issue, I suddenly did an about turn as I realised the importance of his attempts to educate both his son and I to use chickens in a city garden. 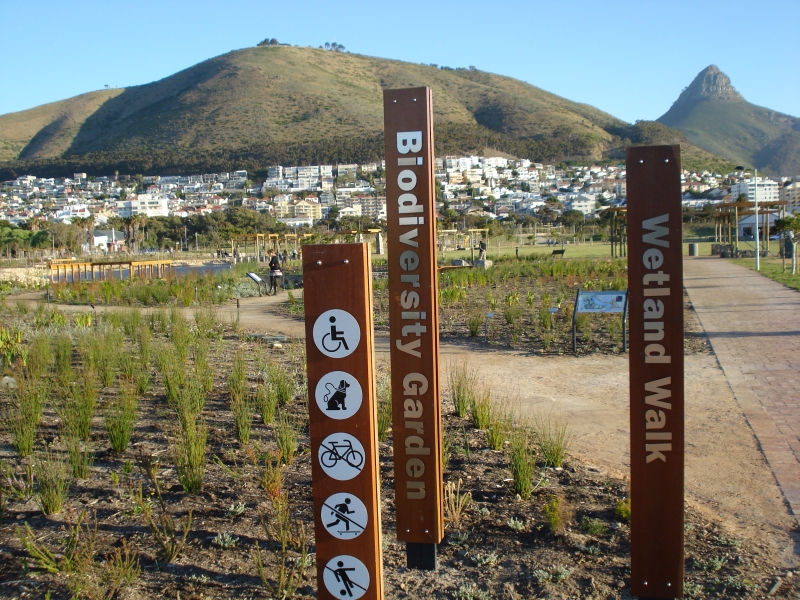 Biodiversity signs in a lot of the beds, offer suggestions on how best to grow healthy plants, combat pests, invite wildlife into your garden (small wonder that since his first visit here, my better half – I am being forced to think of him in these terms since discovering how many of these elements we have in our own garden – has added a pond in the midst of the vegetables), how the veld is a supermarket – all emphasising how much we rely on biodiversity, even if we’re unaware of it.

One sign suggests you look up (at this stage you are conveniently right infront of Signal Hill) and invites you to see how there is more to the mountain than meets the eye; that the hill is in fact rich in biodiversity, despite the development.

And it’s interesting to learn that spring water has been redirected off Table Mountain to water the gardens that would otherwise cost the city dearly. In fact, the whole park is watered this way. 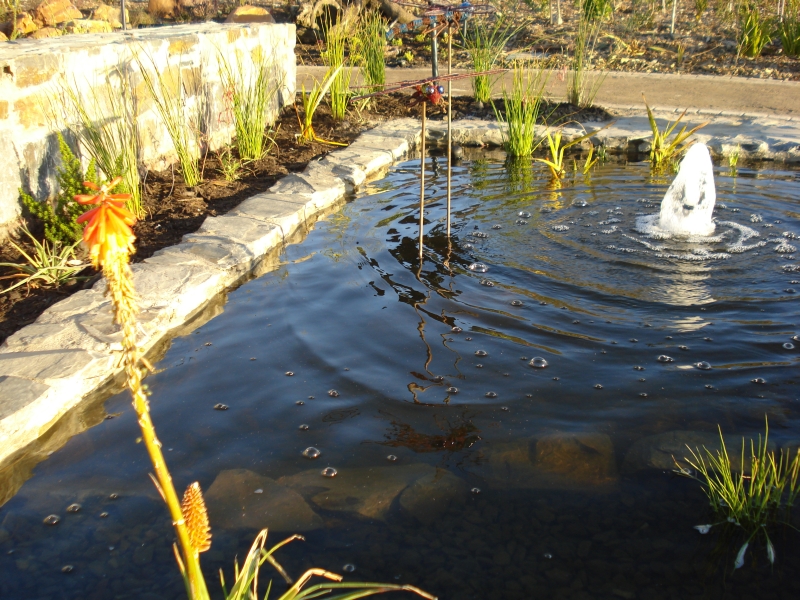 The section of the garden that grabbed me the most is the people and plants section, where roasting and baking the Khoikhoi way is just one of the many things you can learn, including the fact that skilpadbessie berries make a good snack, if you can find them whilst you hike in the Cape.

If it gets too hot whilst you’re there, there are wonderful drinking fountains, shady spots, picnic tables and benches in other parts of the park. And there are a lot of birds, drawn by the diversity of plants.

we parked at the Virgin Active gym, just off Main Road. The garden is actually closest to Mouille Point’s lighthouse, away from the stadium. There are, I believe, five entrances to the Green Point Park. If you are on foot, enter via the Fan Walk.

biodiversity is the variety of life on earth. The floral kingdom in the Cape is not only unique, but the smallest and richest in the world. It is also under threat. To help, promote the garden, and encourage biodiversity in your own garden.

to see the garden at its best, go in the early summer months (Oct/Nov), but don’t let this stop you exploring the garden at any time of year. The amazing array of plants are meant to cope with the extreme weather of the Cape.

you will need more than one visit to really absorb the wealth of information available in the showcase garden. And there are recycling bins at the entrance for you to sort your litter.