You are here / South Africa Travel News / Destinations / Western Cape / Bishop Tutu casts his vote for Table Mountain – Have you?

Now reading: Bishop Tutu casts his vote for Table Mountain – Have you?

Archbishop Emeritus Desmond Tutu has urged Capetonians, their fellow South Africans and international fans to cast their vote for Table Mountain in the Official New7Wonders of Nature campaign. The iconic South African and Nobel Peace Laureate was speaking at a press conference in Cape Town yesterday, Thursday May 6.

The majestic flat-topped mountain is on a shortlist of 28 natural sites from around the globe competing to be named one of the Official New7Wonders of Nature. The Official New7Wonders are determined entirely by votes (online, telephone and /or SMS) from the public, with the organisers aiming to attract more than 1 billion votes across the globe. 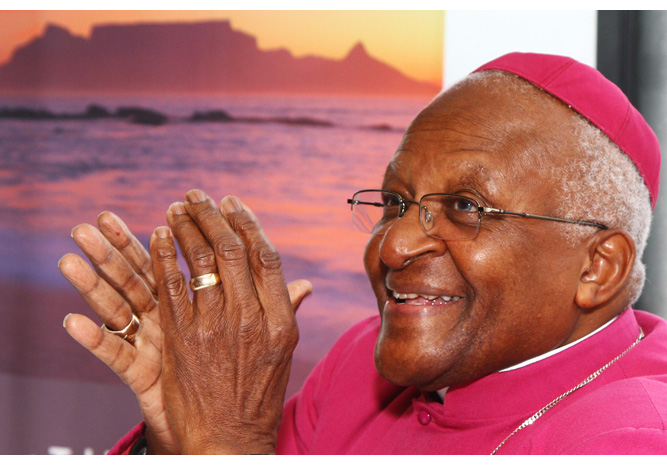 People whose votes won Table Mountain a spot in the top 28 need to vote again to ensure Table Mountain makes it into the final list of seven. “It is important that South Africa wins as it’s important for our psyche. And this vote is apolitical – Table Mountain belongs to us all – let’s show we can win. If we win, we will all have a spring in our step,” Tutu said.

“The most challenging thing now is getting people to take the trouble to vote. Voting is easy these days, you just click, you don’t even have to stand in a line,” he quipped after casting his vote online.

Sabine Lehmann, CEO of Table Mountain Cableway, said 98% of the votes received since Table Mountain was shortlisted have come from outside South Africa.

Commenting on this the Archbishop said: “Isn’t it fantastic that people from outside of South Africa recognize Table Mountain as a treasure? Now South Africans must open their eyes and see the treasure in our midst.”

Table Mountain’s competitors include the Grand Canyon, the Amazon and the Great Barrier Reef.

Lehmann said that the Ancient 7 Wonders of World originated more than 2000 years ago. “Wouldn’t it be a feat for South Africa if in 2000 years time schoolchildren were still taught that Table Mountain was one of the seven wonders of the natural world.”

Visit votefortablemountain.com to vote and for more information about Table Mountain’s bid.