You are here / South Africa Travel News / Destinations / Western Cape / Do You Know About The Cape Camino?

Now reading: Do You Know About The Cape Camino?

I do a day of the Cape Camino and go on a pilgrimage for part of the route. On the way I celebrate peace, love and humanity and discover the joy of wandering along the byways of my own city, free of all responsibilities for a few hours …

I stumble across the Cape Camino in my trawlings of the Internet and manage to bag myself a day on the route, in the company of the founder, Gabrielle Andrew… 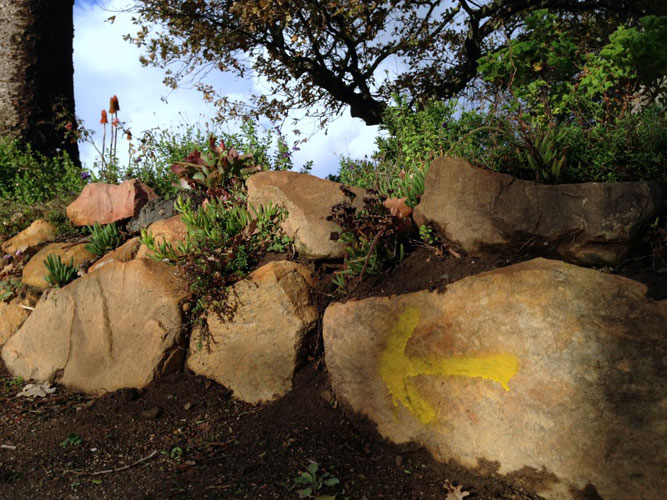 I meet Gabrielle (pronounced like the angel, Gabriel) at Schoenstatt Retreat in Constantia in the early hours of a crisp and glorious winter morning. The ground is damp from rain in the early hours, but the heavens are clear and a big sky day is guaranteed (yr.no never gets it wrong).

Gabrielle is larger than life. Her enthusiasm for the Camino embraces you like a warm blanket. I get her to tell me how it all came about.

“Almost everyone I meet, who hears about the Cape Camino, says: ‘Oh, I had that idea!’” she laughs.

Cape Town is not only incredibly scenic, but alive with mountains, interesting sacred sites and a unique history just waiting to be uncovered.

Everyone may have had the idea of a Camino, but it was Gabrielle who made it happen. And it’s no mean feat.

But before I can find out terribly much more, Gabrielle has to interrupt our conversation to fetch three wayward pilgrims on the second leg of their journey, from a backpackers not far from the retreat. She leaves me in the company of Collin the Bushman, the pilgrims’ guide for the day.

One of the highlights of the Cape Camino is the option for local Khoisan guides whose knowledge of botany, history and tour guiding makes them gifted company. Their storytelling is woven through with accounts of their heritage, of the people who originally lived around Cape Town.

Collin describes himself as an Attaqua bushman from the the town of Dysselsdorp, just outside Oudtshoorn. He is a poet, artist,and musician on a journey to rediscover his Khoikhoi roots.

He is also involved at the Castle in the Aba te Indigenous and Cultural Heritage Learning Programme where he often gives Khoi mouthbow demonstrations. He’s an interesting man.

The pilgrims arrive just as our conversation is getting interesting, and we all head down to the pretty little Catholic shrine on the Schoenstatt premises, the first of two shrines on my morning, opposite the church. The original shrine at Schoenstatt, near Koblenz, is also a place of pilgrimage.

Gabrielle and I push on ahead, leaving the pilgrims to pilgrim at their own pace with Collin, who is a font of knowledge about the area and its history, particularly an interesting account of Catherina of Steenberg, but I’ll leave it to him to tell you. 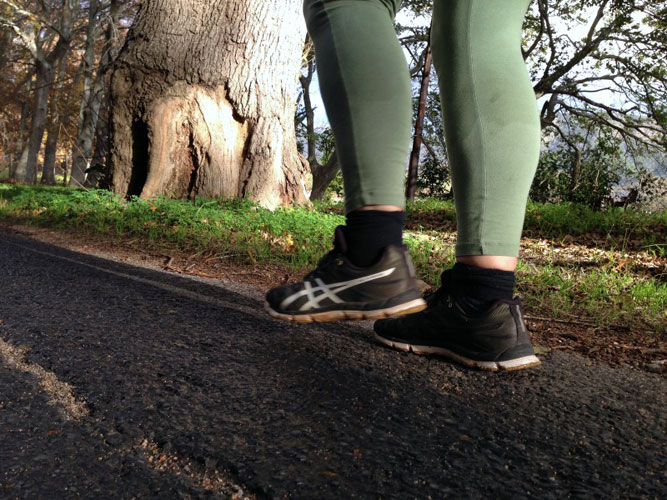 Photograph: One foot in front of the other

Now on the road Gabrielle and I enter the gates of Groot Constantia, heading up its wide oak-lined approach on foot. It, like most of the walk I am soon to learn, is incredibly beautiful – the mountains constantly in the background. We suddenly veer off through the vineyards, winding our way through the estate on a route you cannot do in a car, and exiting on its southern edge.

It’s Nabeel, the caretaker’s, day off although he is still cleaning the tiled area infront of the kramat. His muttering, and heavily charged presence add a certain charm to the shrine visit. Gabrielle assures me that usually he has plenty to offer about the sacred site.

The three pilgrims, Retha, Riette and Adele Geel, catch up with us at the kramat. They’re here from Pretoria Accommodation. Retha has walked the Spanish Camino and she’s brought her daughters on this pilgrimage. They’re well kitted out with hiking poles and solid walking shoes, their Cape Camino ID tags dangling on the backs of their rucksacks.

They discuss their trip from Rhodes Memorial to Constantia the day before. It was a little steeper than they had bargained for, but the pace was easy going and they expound at the scenery. None of the three is daunted. They’re loving it.

Collin lets us know about a little stream at the back of the kramat where I top up with mountain water.

And then we head back the way we have come, and south to the gates of Buitenverwachting. Whilst we traipse up the sand road we’re accompanied by a huge hawk that swings from tree to tree. There’s a surprising traffic jam, for a moment, as a truck vies for position with the pilgrims and a Vespa scooter.

I reflect on how this walk, despite being only minutes from my home, could be in another world.

There is no sound of traffic, we haven’t passed other people, besides a couple of Catholic nuns and the keeper of the kramat, and I am exploring aspects to my neighbourhood I’ve never seen before.

We are pilgrims criss-crossing the vineyards and the byways of Constantia, teetering on the edge of civilisation.

Before we know it, we’re rounding the backside of Constantia Uitsig, past the Chris Nixon Bike Park and I’m amazed by how interconnected it all is. 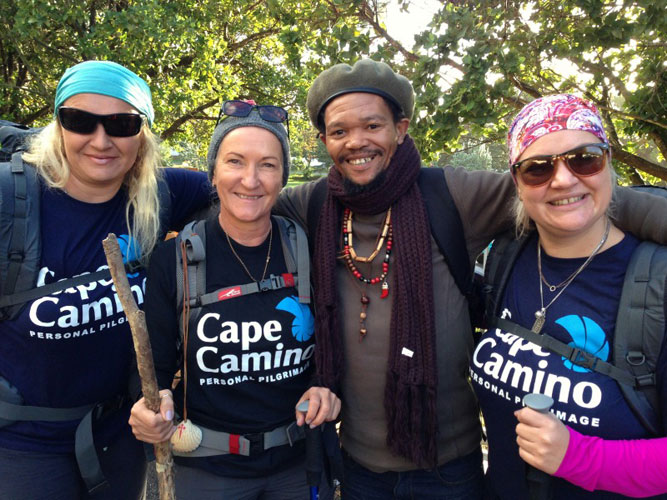 Photograph: Riette, Retha and Adele Geel with Collin the Bushman

If Constantia Uitsig’s gate had been closed we would have continued to the little Tokai stone chapel, but as they’re open we stop on the graceful veranda of Open Door for a cup of coffee.

Across Spaanschemat Road we venture through the Cape Academy for Maths, Science and Technology, down a little path I would not have known existed, and through to a stable, alongside which lives Levi Brown, his entire back yard alive with vegetables and herbs.

But Levi Brown isn’t home to avail us with his stories and I will have to do this trail again if I am to hear them.

Now we head across Tokai forest, hauntingly following the path where Franziska Blöchliger was killed. At the gate I spy the Cape Camino’s logo – the shell paper nautilus.

As a child growing up in Cape Town Gabrielle’s mother took her to the beach on the morning of every birthday to search for these shells.

“The Spanish Camino has the scallop shell as its symbol. When the idea for the Cape Camino began to unfold, it was the obvious thing to use this little shell I found on the beach as a child.”

We pass Pollsmoor, where pilgrims can stop and eat a meal in the canteen, passed Steenberg Village Centre and down behind it, onto the walkway over a wetland into Westlake.

Usually Arthur is here to meet pilgrims and to take them for head massages from the local community. But my time is up, and after walking through the community, I head home, leaving the pilgrims to continue without me to Muizenberg.

Despite my physical tiredness, I am euphoric. I have connected with Cape Town as never before.

The Cape Camino, the little bit that I did, is exceptional, taking you to spaces and places you would not usually visit. It is a MUST for all South Africans. And I’m telling all my friends about it.

To become a pilgrim, simply sign up on and get your infinity passport, maps and access to the routes. 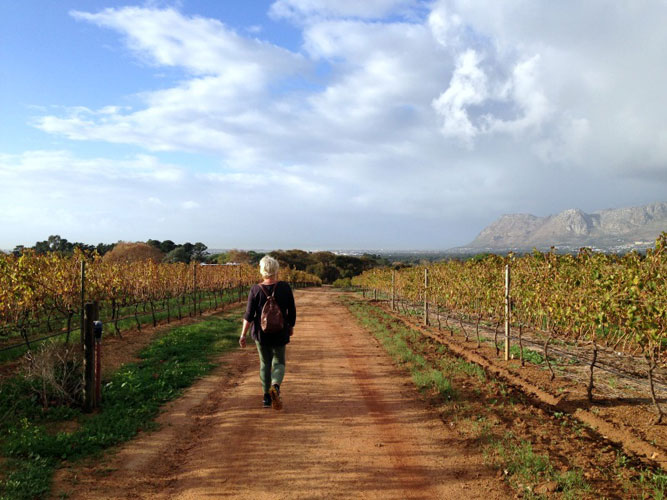 Photograph: The heady views out towards Muizenberg