Now reading: Cape Farmhouse Restaurant in Scarborough – a must for weekend lunch

If you’re after that ‘on a farm’ feeling, surrounded by mountains, fynbos and not much else, without having to put in the miles to get there, then this one’s for you. The perfect views from the front verandah of the 250-year old farmhouse, the gorgeous under-grapevine front stoep, and the none-too-shabby food combine to make this a more than worthy family outing.

Admittedly, if you live in the southern suburbs getting to the Cape Farmhouse Restaurant is quite a trek, although a lovely one (you can make a day of it). It’s up Red Hill way, midway between Simon’s Town and Scarborough, just outside the borders of the Cape of Good Hope Nature Reserve (hence the views, and the feeling of being on the edge of everything). But if you live in either Kommetjie, Scarborough or Simon’s Town, this is one haunt you need to frequent, if you aren’t already. 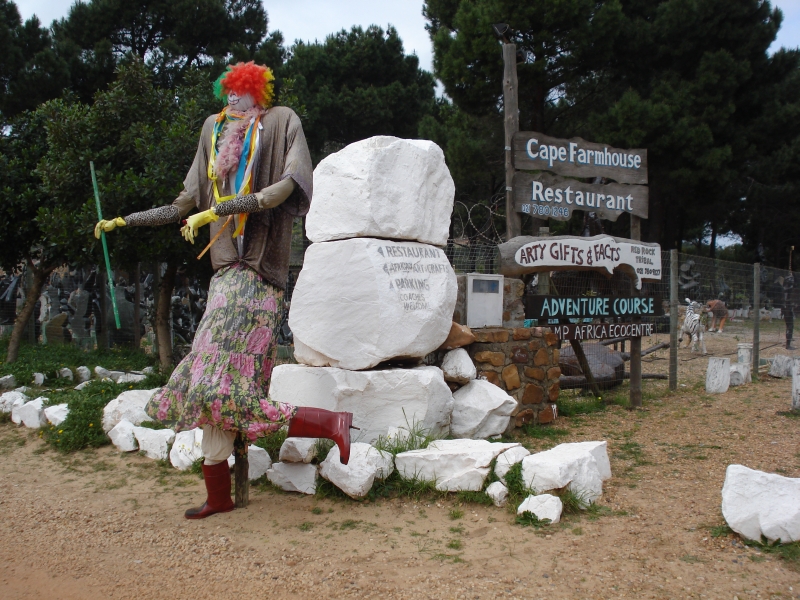 The Cape Farmhouse Restaurant is on a farm. A really old farm. Sitting pretty up against the mountains, it is a gorgeous farmhouse complete with wooden floors, a little verandah and tin roof, that is some 250 years old and looks it (it drips with character). Lavender bushes, lemon trees, effortless sprawling fynbos and an avenue of oak trees under which a couple of horses are tethered just waiting to take your children on horsie ambles, make it simply delicious  – I felt like the heroine in ‘Story of an African farm’ (wrong country, wrong era, but who cares).

And the food is good. There is a kiddie menu – one of my first glances is usually to this section to see whether or not it has ‘fish and chips’ – my child is sadly hooked, despite overfishing, and my graphic description of how some little fishie ends up gutted on a plate seems to have no effect (although he did protest last week when I proceeded to outline the gruesome end the mole that was busy upending the sand verge across from our garden would meet if he ventured our way).

The vegetarian section of the menu is also good. The samp and sweet potato rosti I ordered was excellent – covered in perfectly steamed vegetables and topped with a heavenly mushroom, feta and arugula (a fancy word for rocket) with red pepper coulis and a lemon tahini dressing that decorated the permimeter of the plate – really good! And the Spicy fish cakes easily rival any I’ve had elsewhere – served with a ginger, chilli, coriander sauce, potato wedges and side salad.

Also on the menu are italian bread sandwiches, delectable salads like the roast butternut and beetroot with feta, cucumber, cherry tomatoes, toasted pine-nuts and balsamic reduction, line fish, curry of the day, and breakfasts here look as if they’re definitely worth an early start to enjoy the Three egg omelette or the cake of the day, over which I heard a couple of gents approving as I nabbed a table. 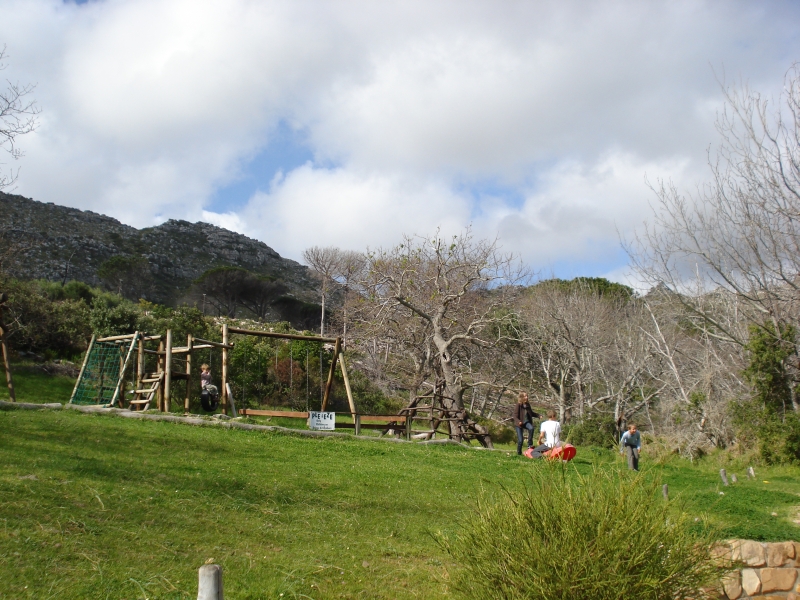 When we arrived at the Cape Farmhouse Restaurant (you’ll find it on Google Maps), a little earlier than the lunch crowd that pull in at around 1.30pm and head straight for the tented area at the back, the rain clouds began to threaten to send a much needed deluge our way. However the verandah was so beautiful to sit on (and I was already having that Out of Africa experience I mentioned earlier) so that moving wasn’t even an option.

As a compromise, we set up an umbrella overhead to deal with whatever the weather sent our way, and simply sat. Weren’t we smiling prettily when the sun came out not even a half hour later, and everyone else had fled to the marquis.

My peppermint tea and honey arrived just as my son discovered the koi fish in the enormous pond-come-water-feature off the verandah, infront of the house. He had already spent a good half an hour playing on the various jungle gyms and swings  (probably the reason most people head to the marquis, as they’re set off to the side).

I corner our waitress and ask her a bit about the history of the place – it’s always good to get the low-down from someone who works there. The Farmhouse Restaurant is run by Rose Kopfer, who has more than cut her teeth and proved her worth at the rather artsy Café Matisse in Kalk Bay. I’m only too happy to hear that the restaurant, at which I’d enjoyed a number of delectable pizzas and tea and cake, hadn’t died a death but had just morphed in a manner of speaking, into the Cape Farmhouse Restaurant. 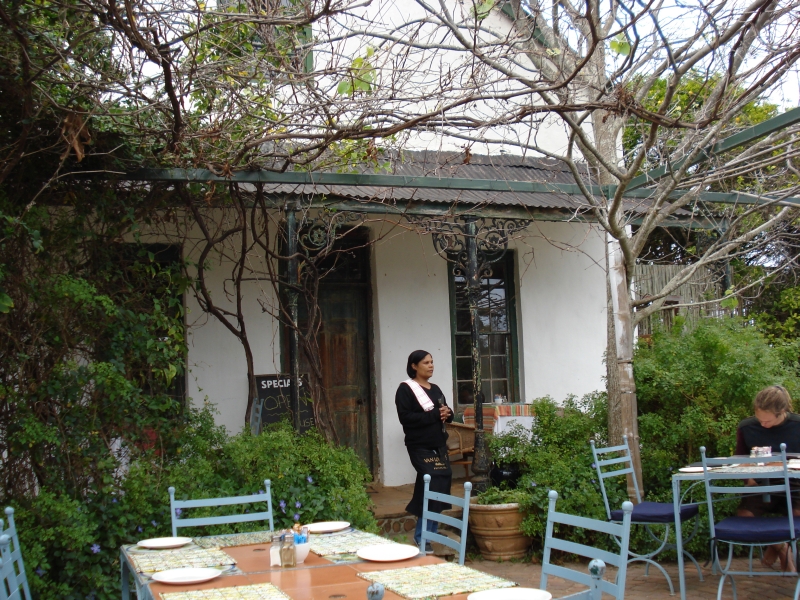 This part of Simon’s Town is known as the ‘land behind the hills’, and it’s easy to see why. The Farmhouse sits on a farm known as Wildskutsbrand and there is a fairly lengthy history that includes the families of Schoester, Malherbe, Schotte and finally Kopfer, who bought the farm in 1992 (Rose’s husband owns the farm, Rose runs the restaurant, and his ex lives on the farm and gives pony rides).

Today it is, I imagine, a far cry from the rather desolate place it must have been. To get up here we drove up Red Hill Road, full of hairpin bends and a rather steep climb, at the top of which are rather gorgeous views over Simon’s Town bay – great place to see whales. And you immediately are transported into the laidback, remote, hippy atmosphere that dominates Scarborough and even neighbouring Kommetjie, to a degree.

Don’t expect the menu at the Cape Farmhouse Restaurant to be anything like Cafe Matisse, however. The food here is very much influenced by the tastes of Africa, and there is a definite Moroccean influence to the herbs and spices, as well as the décor indoors. Real free-range eggs (they’re laid on the farm next door) and home-made bread are available on the menu and they claim that much of the produce is grown in their own organic vege garden. 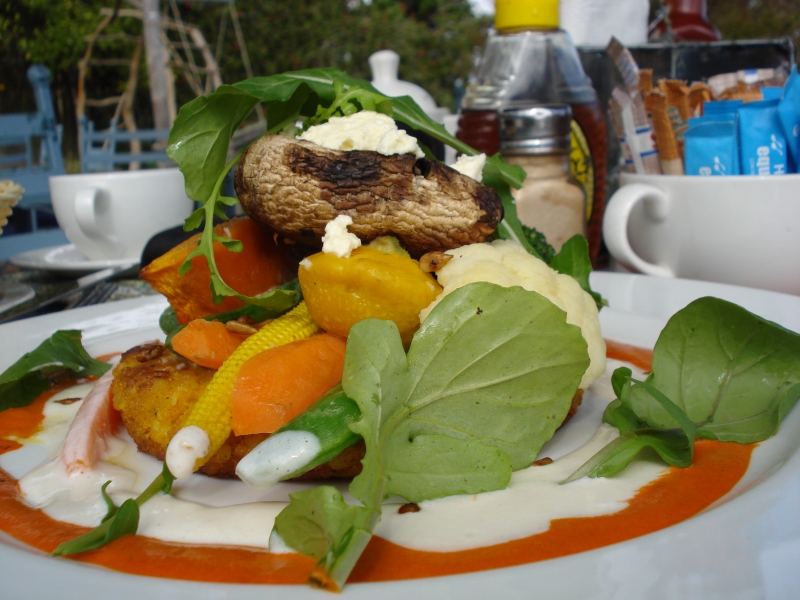 They also have quite a music scene here and I soon understand the reason for the marquis around the side of the venue. Saturday afternoons are live music time and there is a cash bar and braai food (vegetarians not excluded). I imagine that the surrounding farmhouses and gardens make gorgeous wedding photograph material too and there have been quite a few weddings here.

We finish our lazy meal with a horse ride and a wander over to the swings rigged in a few huge trees across the parking lot from the restaurant.