There are a few things that impress you about Cape Point Vineyards. For one, few people even know that a wine estate exists here just below the entrance to Chapman’s Peak with incredible views over Long Beach (okay, you do have to hike it for about five minutes to reach the viewing platform, but it’s worth it, promise).

And secondly, despite some pretty impressive furniture, a 300-year old tapestry of Franco-Flemish origin and a chandelier of note, there is a pretty laid back atmosphere in the wine tasting room, in no small way due to the incredible duo of staff who handle demanding clientèle with aplomb. 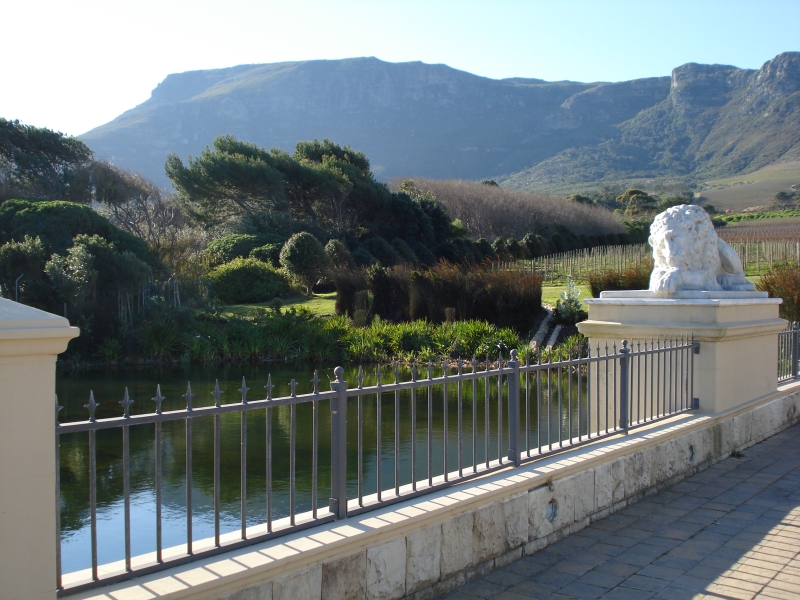 The vineyards lie perched on the narrow strip of peninsula familiar to many Capetonians. It’s position, with False Bay on one side and the Atlantic on the other probably means something to wine fundis in terms of maritime climate but that was not why we were making our way there. We had read that there were picnics to be had, and the idea of a grassy bank, sea views, and wine in the hand seemed an ideal way to spend a sunny winter’s midday.

Actually, it’s quite interesting to look at the history of the wine estate and to think that this same land was originally cultivated by the Dutch, who landed at the Cape in 1652. I hadn’t realised this. My assumption was that the original vineyards in Cape Town are where the Constantia wineries are. In theory, grapes shouldn’t survive up here on these windswept hills.

But since 1996, with the land again prepared to go under vine after much clearing of Port Jackson and the like, evidence revealed that the area had been planted under vines in the early 18th century. This time around the grapes were planted by Sybrand van der Spuy, an investment banker, and wine is made by Duncan Savage (rumour has it that he surfs whenever he can, which explains his choice of vineyard), with the focus on Sauvignon Blanc and Semillon. 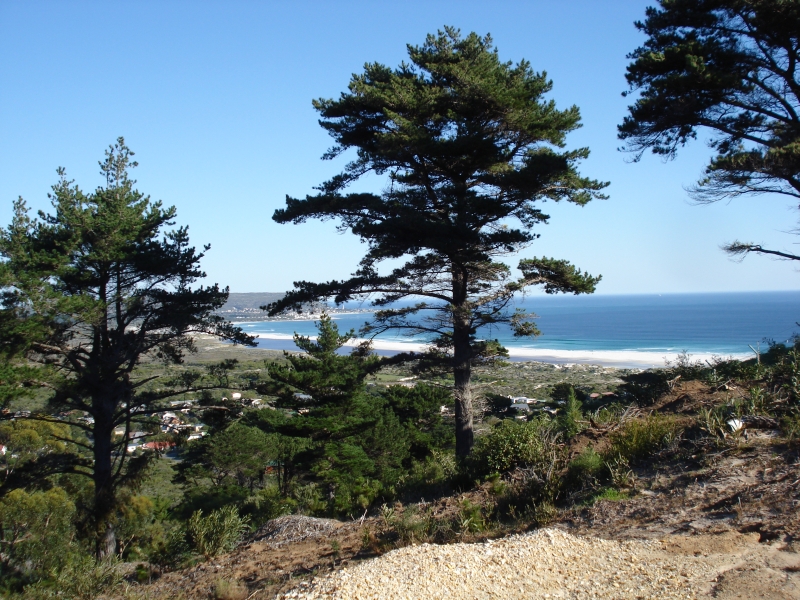 The vineyards are a little confusing. The more official looking estate with vineyards that sweep up the hillside from the road lies in Noordhoek, just on the bend of Silvermine Road. However, these gates are closed and a big sign indicates that wine tasting is a little further along on Chapman’s Peak Drive past the Foodbarn.

So you’re not actually tasting wine next to the vines, so to speak, but a little further up the drag. But you forgive them this minor oversight as soon as the views come into play. They really are impressive.

We discovered that just pitching up for the picnic is not a good idea. To their credit, on the estate’s website it does state very clearly that one should book a day in advance, but never one for formalities, we decide to wing it. Consequently, when Brett and Tracy stare at us blankly, we realise that we might well have fluffed it. They explain that they don’t prepare the picnic on the premises but order in from the Foodbarn. Ah. But there is this gorgeous cheese platter? they go on to offer. We cannot refuse. 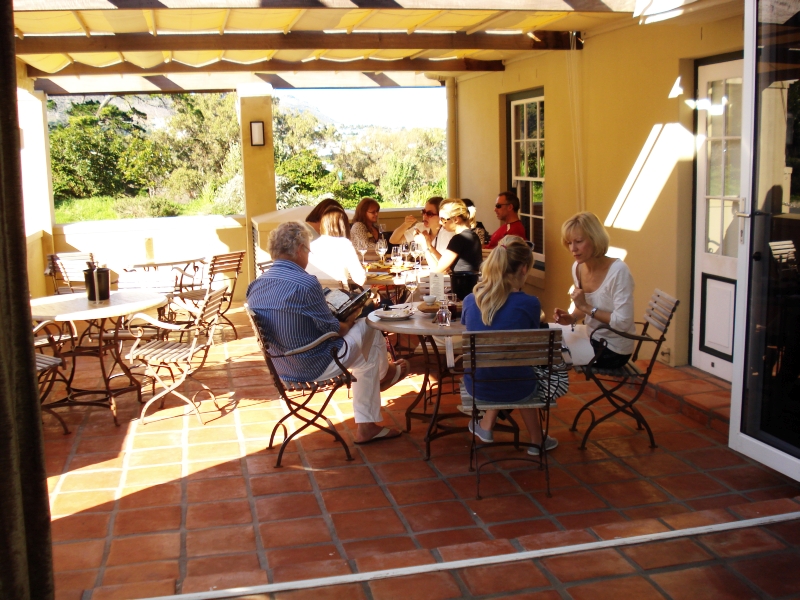 Whilst their cheese platter, admittedly, is not served beneath the blue skies in picnic heaven, it is one of the best cheese platters I’ve ever sampled! This, accompanied by one of the three choices of wine sampling menus (you pay from R15 to R65 to taste a number of their wines, depending on whether you’re after their flagship wines or not) is certainly a close second to a picnic experience.

The cheese platter is a combination of six hand crafted cheeses, including a Gorgonzola, Mont Vere, Emmentaler, Huguenot cheese and Camembert that the winery selects from a cheesery in Observatory called Get Stuffed.

This is accompanied by crackers, slices of freshly baked Ciabatta, a home-made preserve reputedly made by the estate owner’s wife (guests alongside us had already asked for, and been refused, the recipe – it was so good), olives, a sliced pear (in season it is grapes, obviously), Turkish style dried apricots, medjool dates and nuts dripping in honey. This spread easily fed two of us, and we savoured every mouthful. 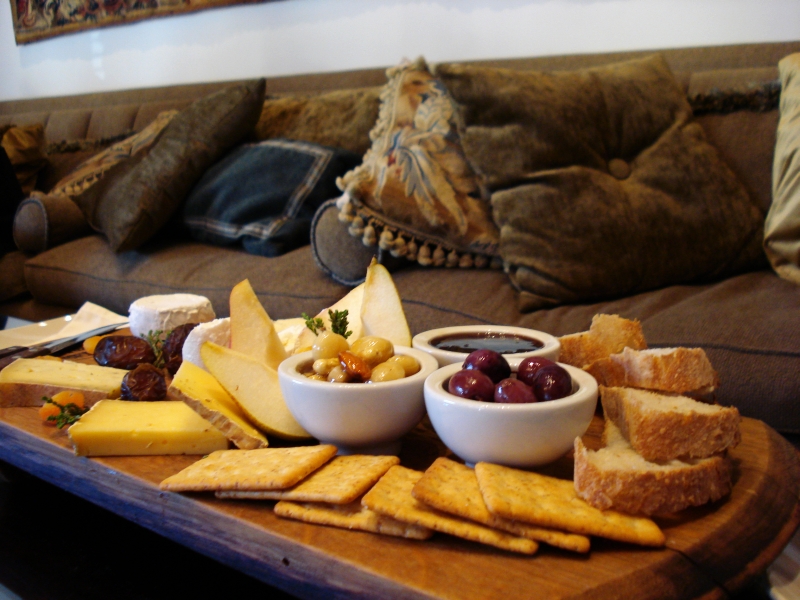 The cheeses have obviously been specially chosen to offset the wines we tasted.

The Splattered Toad Sauvignon Blanc (this rather audacious name has a sobering origin and is dedicated to the endangered Western Leopard Toad), Cape Point Vineyards Stonehaven Sauvignon Blanc, Scarborough Red and Splattered Toad Shiraz/Cabernet Sauvignon were all lovely wines, although my favourite was definitely the Stonehaven Sauvignon Blanc – “grown on sandstone derived soils on their Noordhoek Estate, this wine on the nose, shows an abundance of tropical fruit along with citrus, grapefruit and freshly cut grass (I could definitely taste the cut grass!), which follows through to a crisp palate with a long limey finish”.

Both Brett, who is a CA university student, and Tracy, who manages the wine tasting, were fantastic. In-between surges of demanding, would-be wine connoisseurs who descended on the bar to order various cases of wine, we managed to get the low-down on the stories behind the funishings and the wines. Brett, in particular, was witty, knowledgeable and on the ball, and we enjoyed ourselves thoroughly as a result. 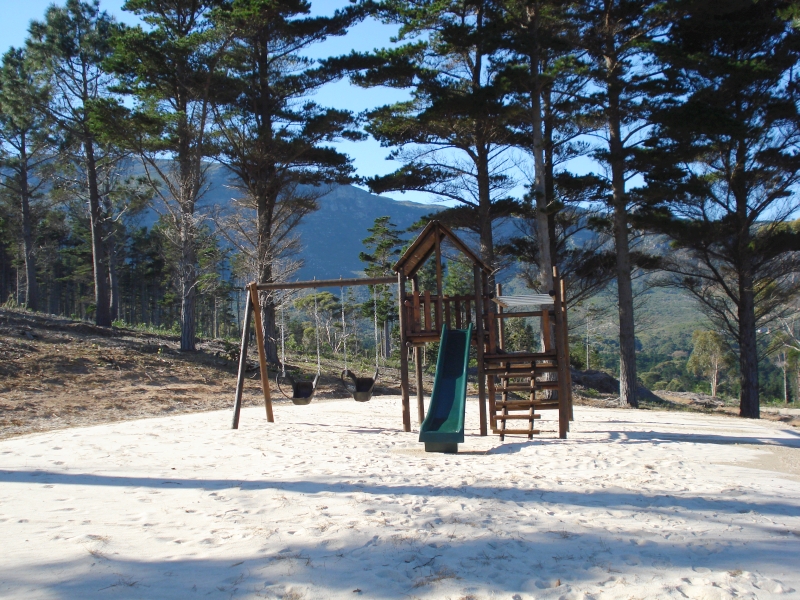 Afterwards, whilst Brett prepared us a doggy bag of our dregs to take home we ambled up the hill to see the picnic site and viewing point. Up on the top of the hill, other than gorgeous views, there is a huge jungle gym for children set thoughtfully in sand. The picnic spot though is not quite the grassy banks I had envisaged, but rather a rather huge cement slab on which the estate lay tables, chairs and umbrellas for guests. The idea is more of a luxury picnic, with your own waitron to ensure that wine tastings make it to your table perched above the beach.