With the FIFA World Cup upon us, it’s no wonder Cape Town is bustling with excitement. I can’t drive down the road without seeing at least ten cars with the South African flag on their side mirrors, and the city centre is alive with the feeling of hope and possibility.

Yes, South Africa is ready. But I have something to admit. I heard about one of Cape Town’s best World Cup attractions from a tourist.  I know, I know; I’m a bad Capetonian.  During one of my lunchtime walks through the CBD, I started a conversation with a Chinese tourist who was excited about having seen squirrels in the Company Gardens.  Go figure. 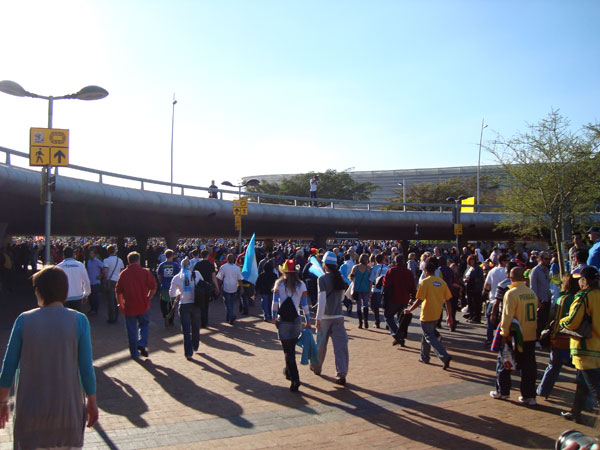 Anyway, said tourist informed me that he was due to embark with a group on the World Cup Fan Walk to Cape Town Stadium.  Which I had never heard of.  He pulled out a map and in broken English described what it was all about. Suitably chastised I made up my mind to do the walk the very next day, to see just what fans would be in store for when an estimated 18 000 of them use the Fan Walk on match days …

The Fan Walk is the walk from St Georges Mall to the Green Point Stadium. The 2.6km distance means that you should start it with ample time to spare, especially if you, like me, are a dawdler. The walk starts off at St Georges Mall, so make sure to examine what local talent Brett Murray has put together. Simply titled Africa, this bronze sculpture with Bart Simpson heads has been both hailed and critiqued. Some were duly offended and saw the mixing of traditional African art with an American pop culture icon as tasteless.  Personally I hope he makes another one with Homer.

It then continues along Waterkant Street from Lower Burg to Buitengracht.  In doing so it cuts across Long Street so be sure to catch a glimpse of one of the more lively places in Cape Town. Waterkant street, having been transformed into a pedestrian and cycle route, has much to offer in the way of lively stalls and local cafes.

There are several traditional shops with interesting snacks on offer so if you need a snack be brave and try something new. It is very easy to become sidetracked once engulfed in the unique Capetonian experience of Waterkant Street. 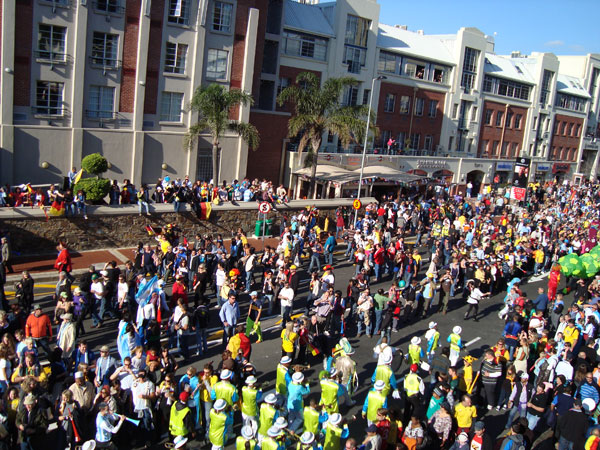 Before hitting the hustle and bustle of Somerset Road the Fan Walk continues past the historic site of St Andrews Square. More than just a pretty face, Cape Town is also rich with history.  In 2003 over 2000 unmarked graves dating back to the 1700s were found. These graves were thought to be of the slaves who died of the smallpox endemic. To commemorate the lives of these unknown people, St Andrew’s square erected a visitor centre and has a curator who explains the story of the human remains. In addition there is a memorial garden, an ossuary, as well as a public space for theatre or sculpture. If history’s not your thing, the square will act as a chill place after matches.

Probably the most vibrant and bustling part of the walk will be Somerset Road, with its assortment of bars and restaurants. From lesbian bar, Beulah to Cuban social club, Buena Vista there is something for everyone, so it would be a good idea to make an event out of this stretch of road. If you’re hoping to spot the Italian Team maybe check out Bravado. It’s both shabby chic and old school Italian and has an awesome collection of square pizzas and traditional Italian pastas.

If you’re so inclined take a detour and check out the Cape Quarter. If you’re hungry or crave a drink there are numerous restaurants and Tank has a cocktail list to blow your mind. A landmark along Somerset Road is the Traffic Department and its Gallows Hill parking lot which has since been transformed into a large public space with easy access into the Western Boulevard.  Then, after the hustle and bustle of Somerset,  the stadium is in sight.