Lucy Campbell’s myth-busting, grassroots, warts-and-all account of the little recognised pre-1652 founding of Cape Town, and the trauma of slavery, is a meaningful educational experience that few visitors can afford to overlook.

‘Cape Town’, says Lucy, her grey dreadlocks loosely held by an orange floral scarf, her hands painting the air in front of her as she passionately engages her audience, ‘is a prime indigenous African-Indian-Asian-Eastern must-stop destination, home to the most diverse community in the world.’

This, she explains, is all of our history. White or black… 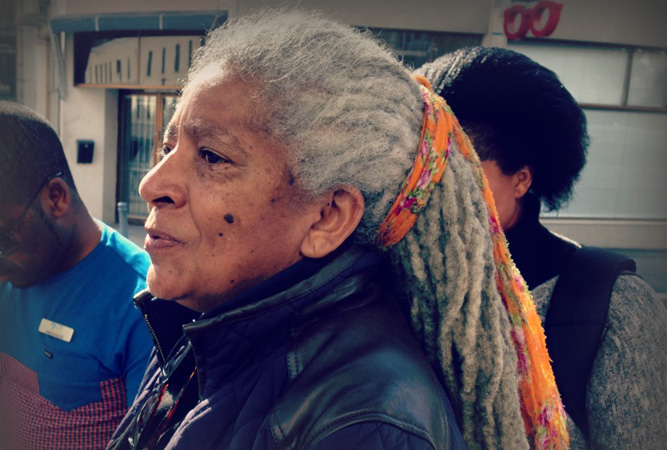 Lucy Campbell is a dynamic character. She’s a refreshing mix of activist and historian, and captivates her audience with an authentic narrative that weaves a tapestry of history seldom heard, and certainly never whilst I was at school during the 1980s.

Her story is one close to her heart, and she speaks with sincerity as she shares her own search for a place in a society that labels all people who are neither ‘white’ nor ‘black’ as ‘coloured’ – a loaded term she refuses to embrace.

Hers is a story about the ‘missing people’ of history – the original peoples of Cape Town – the Khoi and the San, and the lesser-known Indian Ocean Slave Trade that brought labourers and exiles from East and West Africa, Indonesia, India, Sri Lanka and Madagascar.

Lucy has a mixed background. Her mother, Freda Augusta Caroline Cupido, is a descendent of the Hessequa Khoi from Swellendam whilst her father, Domingo Francisco Campbell, descends from Chile in South America.

She was not only unaware of this growing up, she also laments the lack of celebration of her family’s historical roots because of what she terms the ‘slave mentality’ that continues to subdue so many of Cape Town’s people, even post 1994.

‘It is inter-generational’, she explains, ‘but the problems we are left with are global. Colonialism has affected much of the world.’ 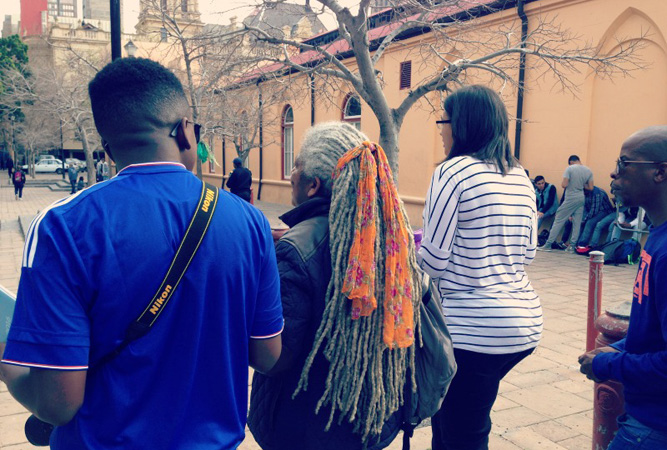 Lucy is eloquent and her topic thought-provoking. Her version of history explores the deep scars left by colonialism. She shines a spotlight on the Khoi and San; the authentic people of the Cape and constructs a poignant tale of the Afro-Asian slave trade of Cape Town.

There is little public acknowledgement of the Khoi and San’s role in history. Nothing like that of the indigenous peoples of the United States, or Australia, by comparison.

There are those historians, like Mohamed Adhikari, for instance, who argue that the annihilation of the Cape San societies in the 18th and 19th centuries was nothing short of genocide.

Armed with numerous post-graduate heritage, museum and history credentials, Lucy laments the lack of memorials or markers in Cape Town for the First People, where, instead, colonial architecture dominates. She points to the foreshore and the V&A Waterfront, and includes the Castle of Good Hope, in front of which we stand, in her example of icons of colonialism.

‘We claim space’, she explains, ‘when we speak about these issues in these spaces.’

Her tour, which is as much a personal journey as it is an uncovering of the treasure trove that is Cape Town’s real history, is what she explains as ‘the restorative power of transcending history by accessing ancestral memory.’

‘It is on the backs of the first indigenous people of this country, and the slaves brought here to serve the Dutch, that the wealth of this land was built’, she argues. 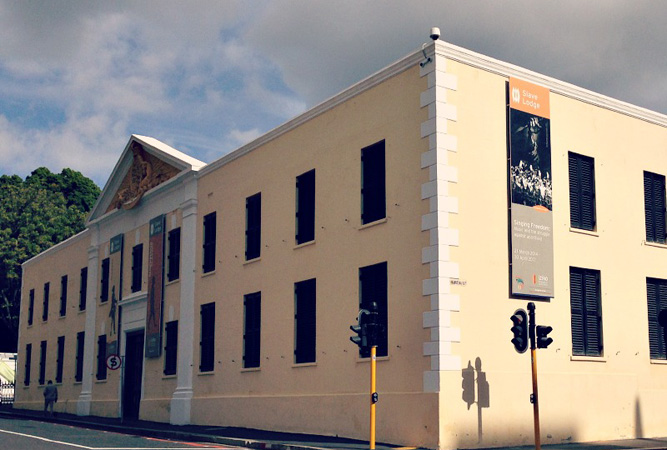 Today I’m on a tour with youngsters, what we call the ‘born frees’ (born close to 1994). Usually Lucy draws stories from those on her tours, those who have memory of their parents’ stories, or the stories of their grandparents. This is how she brings history alive. But the youth have yet to create their memories.

By now we’ve moved on from the Castle, where the government, interestingly, is celebrating the life of Eva Krotoa – a Khoi woman whom Lucy calls the first negotiator between the Dutch and the Khoi. A woman, she remarks, whose blood runs in all of our veins.

Krotoa worked in the household of Jan van Riebeeck, was married to the doctor Van Meerhof (for more on this read the fascinating account of Dalene Matthee’s Pieternella, Daughter of Eva) and was instrumental in working out terms for the end of the first Dutch-Khoi-Khoi War (three wars in total, something else that did not make it into my history text book).

Eva’s remains lie somewhere around Die Groote Kerk (the Mother Church) where the tour group now stands in front of the inscribed granite blocks of the Slavery Memorial on Church Square. Just behind us is the monument under the Slave Auction Tree (except that the original tree is no longer there) on the traffic island of Spin Street. 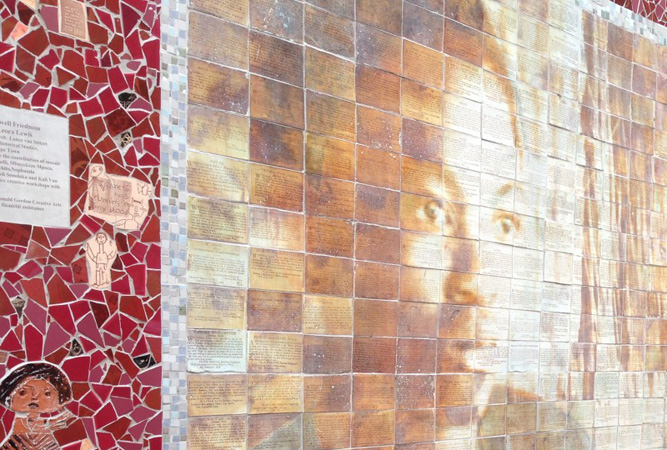 Photograph: We Are Still Here – Look closer, each tile is an advert for a child…

Before that we were on Longmarket pedestrian mall at the memorial – We are still here – a collection of children’s adverts from the Cape Government Gazette.

Between the years of 1841 and 1921 some 7 000 destitute children (most of them orphaned as a result of the small pox epidemics) were advertised in the Cape Government Gazette and, if not claimed by someone, were indentured as labourers.

We head to the Slave Lodge, just next door to Parliament, where Lucy reflects that unless the country addresses the pain of the past, inherent in our slave ancestry, the current instability will continue.

It is here that Lucy is most at home. The Iziko Slave Lodge is where she did her internship. She becomes emotional as she relates the story of over 60 000 people forcibly kept within these walls.

Lucy believes that this building deserves as much recognition as Robben Island.

Whilst the Trans-Atlantic slave trade is recognised throughout the world, few know about the Trans-Indian Ocean slavery route. 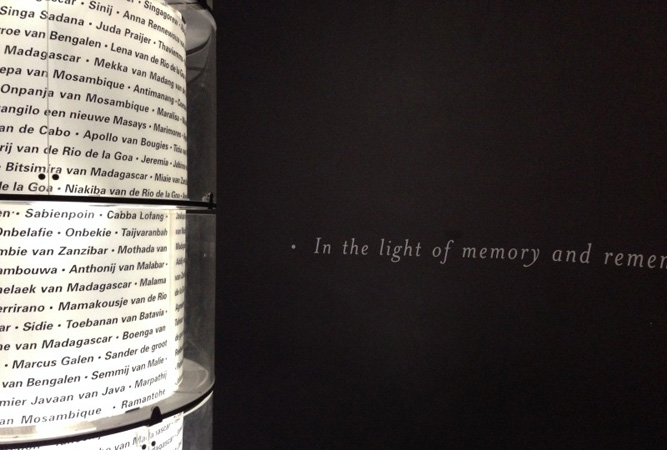 Photograph: Column of Light exhibit of the names of slaves before they were changed by the VOC

Lucy Campbell’s Transcending History tour is something every Capetonian, or visitor to the Mother City, should do for deeper insight into the intriguing indigenous, and slave, history of the Cape.