I often complain there’s nothing to do in Cape Town in Winter (or after the sun sets in Summer). If this is a popular refrain in your household, an option you may be overlooking is the Theatre on the Bay in Camps Bay. This intimate theatre is home to numerous local and international shows from musicals and cabaret to comedies and drama … 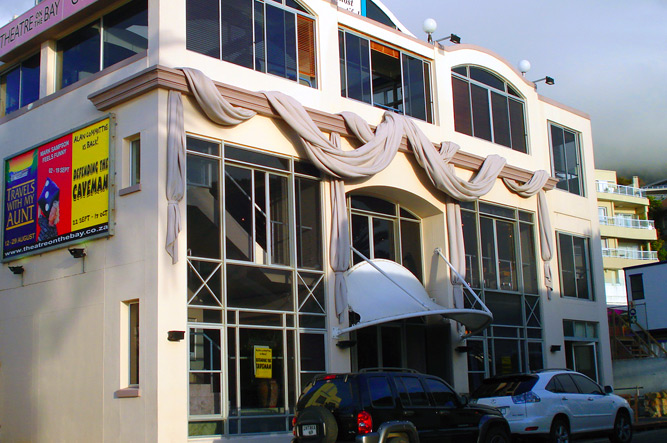 Celebrating its 12th anniversary in South Africa, Defending The Caveman (on at Theatre on the Bay until 17 October 2009) starring Alan Committie, continues to deliver time and time again with its hilarious revelations about (cave-)men and women. I was lucky enough to snap up one of the last remaining tickets, but never fear it’ll be returning next year to Johannesburg  at the main theatre at Montecasino from 23 June to 1 August 2010 and to Cape Town thereafter (so mark your calendars now as it always sells out fast).

If, like most modern cavemen you can’t plan that far ahead, here are a few other shows which will be gracing the stage at Theatre on the Bay in the coming months:

Take a pre-show sunset walk along Camps Bay Beach enjoying the breathtaking scenery as an opening act. Have a pre-show drink at theatre’s Coffee Lounge or Dietrich’s Bar where actors toast a nightcap with the audience post performance. On site restaurant, Act 1 Theatre Café serves dinner from a small seasonal menu before and after the show as do numerous neighbouring venues. Applaud the star studded African skies as you exit the theatre’s canopy and indulge in a cocktail from one of the buzzing pavement cafés where you can reminisce your favourite scene of the show before the sun rises and the beach steals the show back!

We’ve pulled out all the stops to find you best value, luxury Western Cape Accommodation, including some of our best places to stay in Cape Town. Most of these options are self-catered, giving you the privacy and magnificence of a house all your own, with v...