Now reading: Dinosaurs amongst the cycads at Kirstenbosch

It’s a clever idea, putting life-size dinosaurs in amongst near-extinct cycads at Kirstenbosch. Not only does it give you a very real idea of just how large, or small, the dinosaurs actually were by standing next to them but you get a real appreciation for the critically endangered cycads that were part of the dinosaurs’ landscape, at the same time.

On since early June 2015 the open-air art exhibition, known simply as ‘Extinction! Dinosaurs, and Cycads?’, features David Huni’s anatomically correct tin dinosaur and pterosaur sculptures. The dinosaurs and the cycads would have co-habited in a similar way some 65 million years ago.

Dinosaurs and 75% of life on earth died, presumably as a result of a massive asteroid or comet that struck earth leaving environmental havoc in its wake, whilst the cycads survived. This fact alone sharply emphasises their endangered status today.

You can see the dinosaurs from the air up on the Boomslang walkway, from where they appear anything but intimidating. Once down in amongst the cycad amphitheatre (just above The Dell and Lady Barnard’s Pool), however, their true size and the almost life-like tin medium combine to bring these massive beasts alive in the imaginations of both young and old…

The dinosaurs are a reminder of how easily an entire species can be wiped from the face of the planet set as they are in amongst the cycads – one of the world’s most threatened living organisms today. It is mankind, not a meteorite, that is responsible for the devastating trafficking of these plants.

Owning a rare cycad entails whole series’ of certificates to prove ownership. And to sell them is equally as taxing. It’s more difficult to own a cycad than it is to own a gun, if you acquire it legally. Which is why a thriving black market exists. 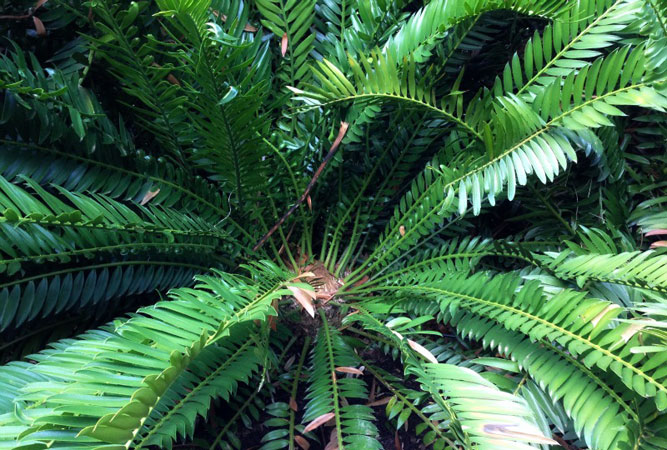 The two-year exhibition at Kirstenbosch highlights the plight of the cycads, but also provides at least 10 other highly interesting titbits of information:

A recent discovery of a platypus-like species of marine reptile dated to the Triassic period, means that the platypus had a prehistoric relative around at the same time as the dinosaurs. The Near Crested Lizard could walk on two or four legs and lived in North America. 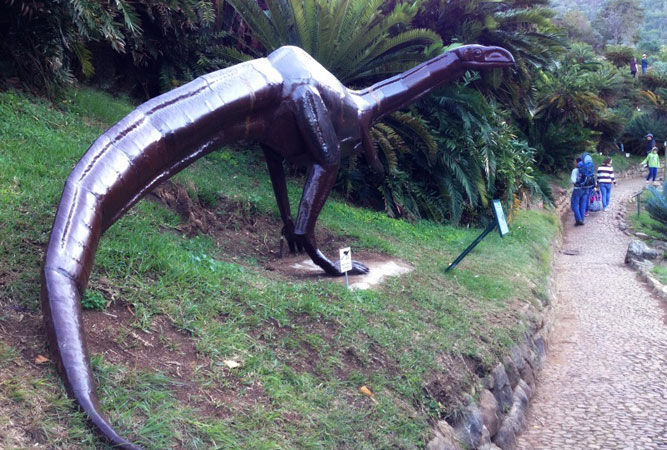 This dinosaur looks most like an ostrich and its scientific name, Nqebasuarus thwazi, means ‘fast-running messenger’ because in stature they were only about as big as a little dog the size of a Dachshund. Scientists do not know how big these dinosaurs actually get as the only fossils found close to Kirkwood were from a young animal.

Only one cluster of Encephalartos woodii has ever been found. Four trunks of this particular cycad were found in 1895 on the fringes of the Ngoye forest in KZN by the curator of the Durban Botanic Gardens, who then tried to cultivate the cycad. A sucker from the original cycad lies, for its own protection, in a cage. This cycad is a male version of the plant. Kirstenbosch hopes that someone may still find a female in the Ngoye Forest.

The Dragon Hunter was called such because it was found in the Drakensberg (Dragon’s Mountains) but also because it hunted other dinosaurs. How big it really was we do not know as all that was found were a few pieces of skull. Footprints near Clarens and in Lesotho may have been from Dracovenator as he walked along a sandy river shoreline millions of years ago.

I was a little surprised at the size of a couple of the dinosaurs. But it is because only the fossils of young animals have been uncovered. The as yet unnamed Kirkwood Iguanodont’s 2.2 metre long display is of a baby, one of hundreds of baby Iguanodontian fossils discovered in 1999 near Kirkwood in what must have been a nesting ground. 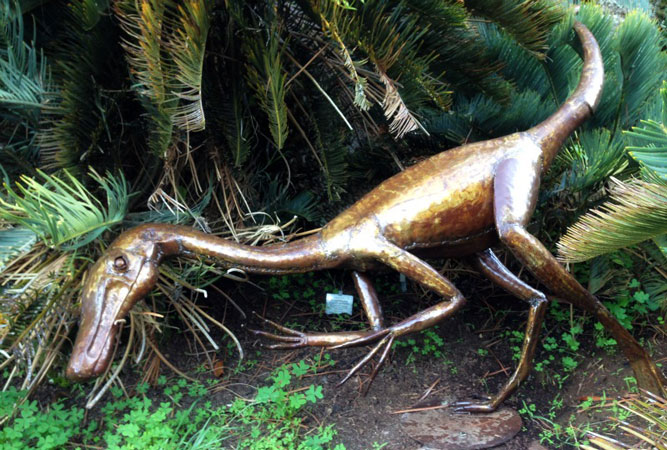 The Toothless Winged Lizard, despite looking like a bird (it has the wingspan of a wandering albatross), was not the ancestor of modern day birds.

Tyrannosaurus rex, the frightening subject of Jurassic Park, the movie, was one of the largest land predators found in western North America. Scientists now believe it was covered in feathers and may have hunted in packs.

If we don’t act now to stop extinction, the cycads will be as dead as the dinosaurs in the next few decades.

As recently as last year thieves made off with 24 cycads worth R700 000 from Kirstenbosch. Despite the offer of a reward, they have disappeared without a trace. As a result the botanical gardens decided to mount a campaign to highlight the threat of their extinction. 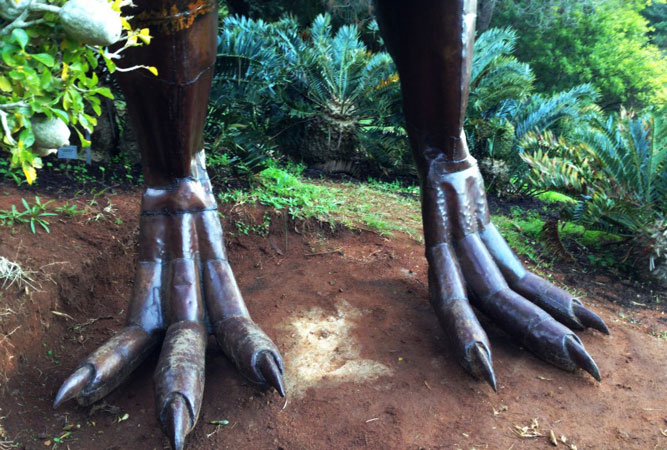