Now reading: Elands Bay a revolution for the soul

So, what is there to do in Elands Bay? was the first question flung my way when I mentioned to two of my closest friends jetsetting in from Johannesburg that we were heading out to the small town on the West Coast for our long-planned weekend away.

A little research brought to light an apt description that went something like this: there is a very long beach; and you can head down to the local pub and drink coke and klippies with the local potato farmers! Elands Bay essentially gives new meaning to the term ‘laidback’. This beautiful, coastal wilderness, reached after roughly two-and-a-half hours drive from Cape Town along the R27 past through the towns of Langebaan, Veldrift, Laaiplak and Dwarskers, will hopefully remain the relatively unnoticed seaside town that it is for many years to come …

Because it is so refreshing to stumble across unhindered beauty that has not yet had ‘this is my two-storey second home when I’m not staying in Cape Town or Johannesburg‘ stamped all over it.

Of course there are holiday homes here, or we wouldn’t have had the joy of staying in the Straw Revolution, a strawbale home, designed by Matthew Beatty and built along a unique theme in which the inner heart of the home is in fact the Fynbos rich outdoors and  in no way slewn off from the rest of the world by a six-metre wall. You can, in fact, enter the inner sanctum without opening a door. 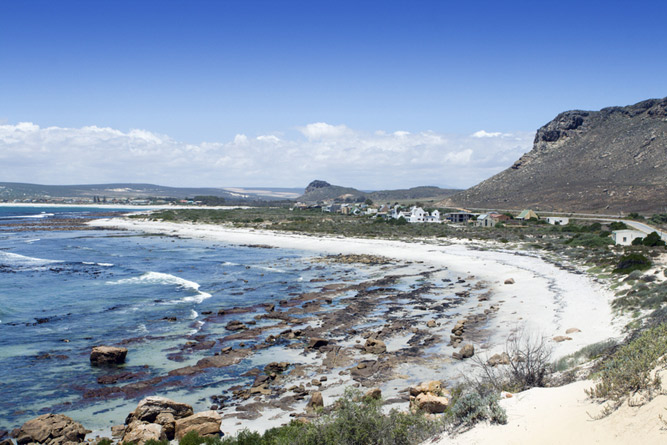 The tranquil courtyard of the strawbale home forms a perfectly shaded nook at most times of the day, and a star-gazing sanctuary in the evenings. And the outdoor-yet-indoor shower and bathroom are an unexpected delight.

It helps that we were there on the most perfect ever weekend of the year! Not only did we have faultless summer weather (blue skies, not a breath of wind, calm seas) in what was the middle of winter – she of heavy weather conditions, downpours and windswept skies – but no-one else had cottoned on in time to head out to Elands Bay either, which meant that the town and beach were desolate, but for a couple of kite surfers, dog walkers and a handful of surfers.

It is hard to depict with words the harsh beauty of the West Coast. Our two-day break was the equivalent to six days away because of the immediate sense of time having slowed, the beauty of our surrounds, and the effortless relaxation that the house provided.

In the Bobbejaan Mountains that suprise with their beauty and act almost as a headland to the bay that is Elands Bay, we are told you can find Bushman paintings, whilst walking the beach to watch the gulls crack mussels by flinging them against the rocks, close to the fish factory on the south side Elands Bay (even this far flung town has a north and south divide!) is an early morning obligation.

The pretty Verlorenvlei marsh, one of the few coastal fresh water lakes in South Africa and a RAMSAR site, is an important wetland and birding area just inland of Elands Bay that only adds further pleasure to a visit here. 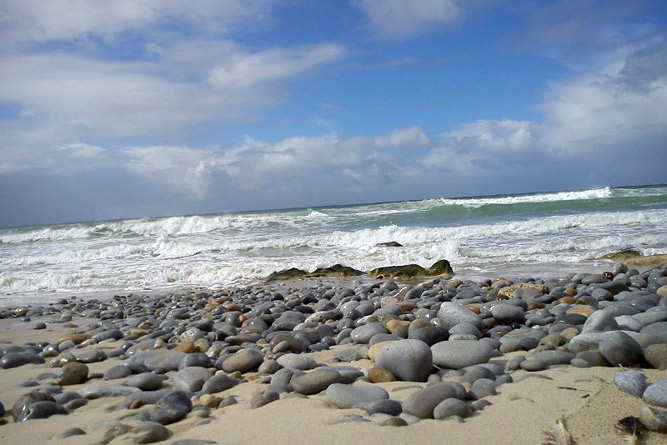 It is also the centre of much controversy given that it is under threat by a proposed tungsten open cast mine. If mining rights are granted, an open cast mine on 500 hectares of land just next door to Verlorenvlei will result and there will be a major impact on Verlorenvlei. Considering that this is home to 20 000 individual birds in the summer months and to three globally near-threatened and eight nationally threatened bird species (we saw a few pelicans gracefully gliding on the waters just in passing), this is a fairly critical decision not to be taken lightly.

The only blip in our idyllic break was the fairly regular passing of trains carrying iron ore between Saldanha and Sishen in the Northern Cape. And it’s a fairly long train…

Despite this, our strawbale experience was one we would repeat at the drop of a hat and one which left each of us with a renewed sense of abandon and joy at the unanticipated beauty of the weekend.

As the Coast to Coast Guide so capably says: “The west coast is like a high powered internet connection to your soul. It is wild, rugged, tempestuous and untamed and any time spent here will lodge itself in the feel good centres of your being.” We couldn’t agree more!