Dick Dace visited Sanbona recently & was so impressed with his experience that he had Fox News in the USA show the footage he took on the reserve. Mr Dace also wrote the following article for H Texas magazine on the White Lions at Sanbona.

At 6 a.m. on a brisk, fall day, the SUV bucked over the broken sandstone road in pursuit of game in the wild rosemary hills of Sanbona, South Africa. The Mediterranean blue skies greeted the dawn from last night’s rare rainstorm that prompted the March Lily to bloom in a spidery-profusion of white and pink, amid a backdrop of brown and green shrubs. Around the first corner from Tilney Manor, were an Oryx Gazella and her baby. Her large, black, V-shape rack of horns crowned her white face. She watched us with unblinking, black eyes as her calf moved behind her. The calf also sported a crown of horns, as the only animal to be born with horns.

Jabulani and his mate, Queen, were spotted near a ravine, lounging in the shade of a Kebad bush. Jabulani’s face, big and white, was a sharp contrast to his brown environment. Queen had recently given birth to three cubs: two males and a female, all white with blue eyes, like their parents. One could understand why Jabulani and Queen were raised as pets. They looked like store-bought plush toys. 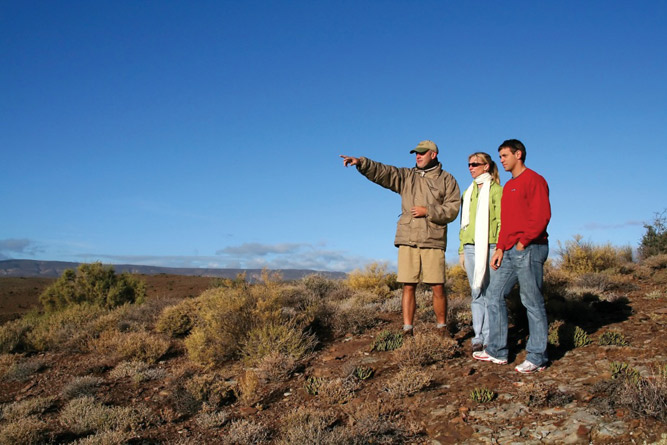 Having been raised by humans, Jabulani and Queen, the deadliest of all lions, had lost their natural fear of man. Since they grew up as family pets, sleeping on the family sofa, playing with the kids, they lost touch with their wild side. Now that they are parents and back in the wild, their natural instincts had to be rekindled.

Hunting actually is a skill that cubs learn from their parents. Because Jabulani and Queen did not learn how to hunt from their parents, the rangers at Sanbona Wildlife Reserve have to find a way to teach them. “Hunger is a great motivator,” states our guide, Jan Oosthuizen. “Queen killed an Oryx the other day, and that was a huge beginning. She was able to feed her cubs and her mate. When the cubs are about 2 1/2 years old and reach their sexual adolescence, they will be kicked out of Jabulani’s pride, and we hope to introduce them to the other pride here at Sanbona. It is our hope, wish and dream that the cubs that were born wild, will grow up wild and stay wild.”

When Jabulani became curious about us, Jan pulled the truck away from the pride. “He wants to play with us,” he says. “And that is not a behaviour we want Jabo to imprint on the cubs.” At sunset, we witnessed the elephants heading home from a day of feeding. The bull lead the way, followed by his two cows and their two calves each, one of which was just 11 days old. 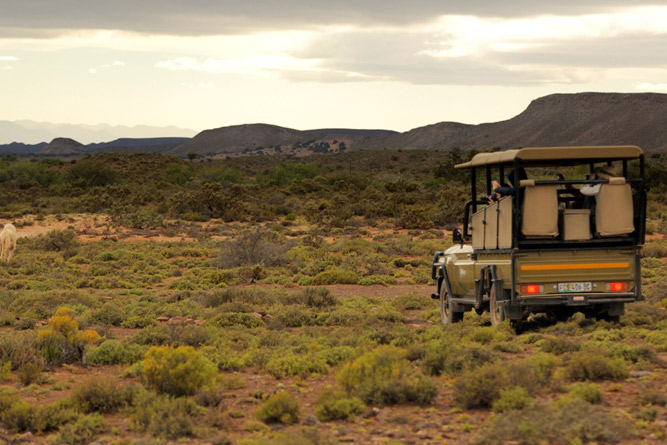 Sanbona Wildlife Reserve is part of the Mantis Hotel collection. Sanbona was created when 19 sheep farms failed after the water tables were realigned following an earthquake in 1969. The goal of Sanbona is to reintroduce indigenous animals to the area, including the “Big 5” – lions, leopards, elephants, rhinos and buffaloes. These animals acquired this nickname because they are Africa’s most dangerous animals (and used to attract hunters from all over the world). They are extremely exciting to watch in the wild.

The lodges of Sanbona are some of the most romantic hotel rooms in the world. The spacious suites showcase a vast savannah that stretches to the horizon of rolling hills through the French doors in the bedrooms. Only animals (not humans) are allowed to roam the fields, which give the room and the outdoor, double shower the privacy it needs. One evening after watching the animals have their evening drink, the guides served us champagne in the bush. Since this was our last evening at Sanbona, the butler drew all the guests a bubble bath in their pedestal bathtubs, complete with rose petals, more chilled champagne and heated towels. The evening was the stuff of romance novels, and a great update to the “Out of Africa” dream.

The creative, world-class meals at Tilney Manor are served on an outdoor patio overlooking an indigenous garden and infinity pool. Ostrich, antelope and wild duck were daily features, paired with the award-winning wines from Steenberg Winery. All the movies, books and wildlife films had created a vision of Africa that did not prepare me for the reality of South Africa today. It is more beautiful than Hollywood depicts, and its people, along with the animals, will make you want to return again and again.

Dick Dace is the Epicurean Publicist. He does lunch for a living. 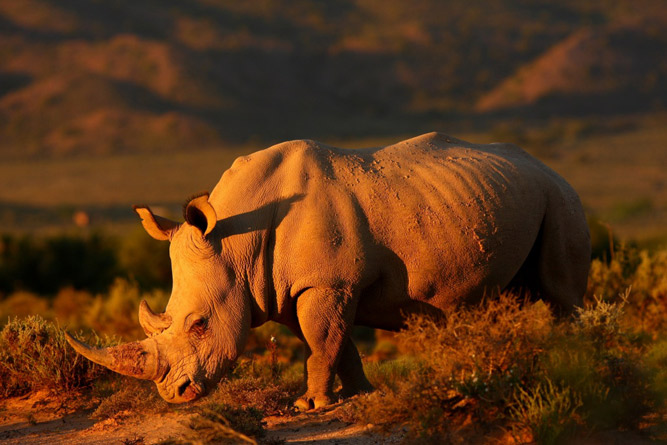