Twice a year Hout Bay hosts a Green Faire – a showcase of sustainable living options in an outdoor setting. It’s an occasion worth diarising as we’ve visited the first and the third, the latter having taken place last weekend, and been more than a little impressed.

The Green Faire is run by Envirochild Projects, a not for profit organisation facilitating sustainability, self sufficiency, waste reduction, energy efficiency and any other green projects that encourage conscious living. Envirochild also has quite a vision for Hout Bay and is dedicated to uniting the community to form a Transition Town.

Transition Towns is a movement to raise awareness of sustainable living and to build local resilience in the community, to equip themselves for the challenges of climate change and peak oil. The idea is to find methods for reducing energy usage and increasing self reliance, and a slogan of the movement is ‘Food feet, not food miles!’. In other words, there is a move to do everything locally, and to become self-sufficient. 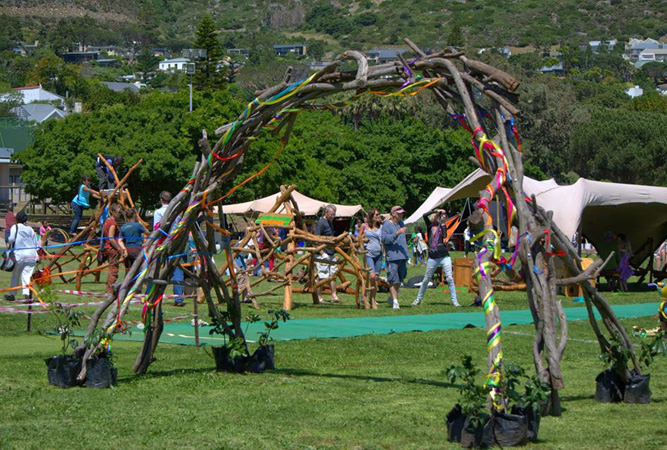 The Green Faire is part of this attempt to empower the community, to promote environmentally friendly, efficient products, and highlight the importance of growing our own food. The idea is that a local community should ‘grow local, buy local, eat local, build local, employ local, conserve local, use local energy and promote local learning, that people will be able to share locally, and use a local currency. Quite a tall order, but it’s already working in some towns in the UK.

This forms the background to the Green Faire, which has an impressive list of exhibitors and has grown quite substantially from the initial faire set in the grounds of the Hout Bay community centre, to this the third faire now in the fields of Kronendal School. Right from 10am, when the gates opened, things got off to a great start. In the ‘Talk Tent’ you could have caught up on The Story of Stuff (if you haven’t already seen this incredible 20-minute, fast-paced, fact-filled look at the underside of our production and consumption pattern, then do so. You can download it off YouTube).

The Talk Tent continued with interesting talks on Hout Bay’s Zero Waste vision, the Community Talent Exchange and why it is so important to have an alternative exchange system right now, the dangers of genetically modified Food by Charmaine Treherne from SafeAge, a talk on permaculture, and much more.

And if listening to interesting talks was not the way in which you wanted to spend your Saturday morning, then there was plenty else to do and see at the faire. My other half got to ‘test drive’ an electric bicycle on display by Ecycle SA. It works very much like an ordinary bicycle, except for the additional electric ‘umph’ to get you up the hills and to places a little faster than you usually might, on the seat of a bicycle.

Good news is that if you don’t want to peddle, you can use the throttle on the handlebar and get by in cruise mode (don’t know, feels kind of weird not to cycle on the back of a bicycle, but I could see how this might come in handy). 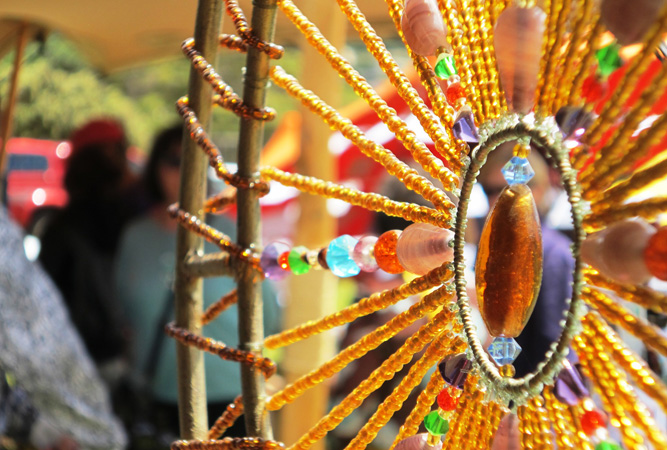 This particular model of electric bike also folds up, making it great for commuting. You can also get up to 25km/h, arriving at your destination with a lot less of the huff and puff than a normal bike ride.

According to their website, you can also get a ‘trike’ version, which comes with a basket both infront and behind – a moderate shopping expedition is definitely on the cards when on this model. Even their mountain bike version looks pretty cool! (wonder if they’d do a child carrier?)

I managed to stock up on a whole load of goodies made from recycled materials for Christmas. In particular the Klikety Klik box is an awesome receptacle for chocolates, soaps, or anything else smallish. They are made by an organisation called All Women Recycling who can produce these amazing contraptions for events and even brand them for you. I’m mad about them!

Free Life on Earth, who promote renewable energy and eco-conscious living through educational and inspirational intiatives, served us a cup of solar-heated tea! The fact that it took a couple of hours to make was not the point so much as it was made on a small, home-made DIY solar stove.

Makes one appreciate the electric kettle, and just how different our lives could be if we had to juggle our appliances to use with solar power – no more using your computer, washing machine, kettle, TV and hairdryer concurrently! We have friends on solar power in Glencairn (they are officially ‘off grid’) and they’ve managed by keeping their needs to a minimum and they ‘time share’ the solar power.

The entertainment for children was awesome, as were the children’s exhibits called ‘Rubbles and the Recycle Market’. All the grade threes of Hout Bay were challenged to create crafts out of re-usable waster products and sold them at the faire as part of an ongoing education proramme to inspire pupils to think about waste management. Well they inspired everyone! 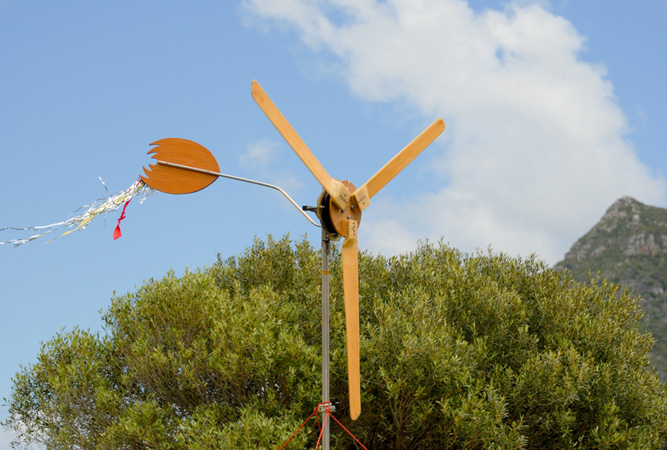 We bought a few Christmas angels made from recycled tin cans from Atleho Dichaba, who employs roughly twenty people to do the same. He shakes his head when he thinks that the average person looks at a tin can as something to throw away. When he looks at a tin can it is worth R15 to him!