Now reading: Intaka Island the green amidst the skyscrapers

Bang smack in the middle of Century City in Cape Town is a green lung called Intaka Island. It’s touted as an ‘environmental oasis’ and I’m not surprised to learn that only a handful of people know about it. Certainly on the day we visited not a soul was about – yet Century City was teeming.

If you manage to see an aerial photograph of the area the wetland and bird sanctuary is really rather big – 16 hectares. It’s just that in the midst of all of the high rise buildings, you’re hardly aware that it’s there. Considering that Century City is 250 hectares worth of concrete jungle, you’d be forgiven for not knowing about it. 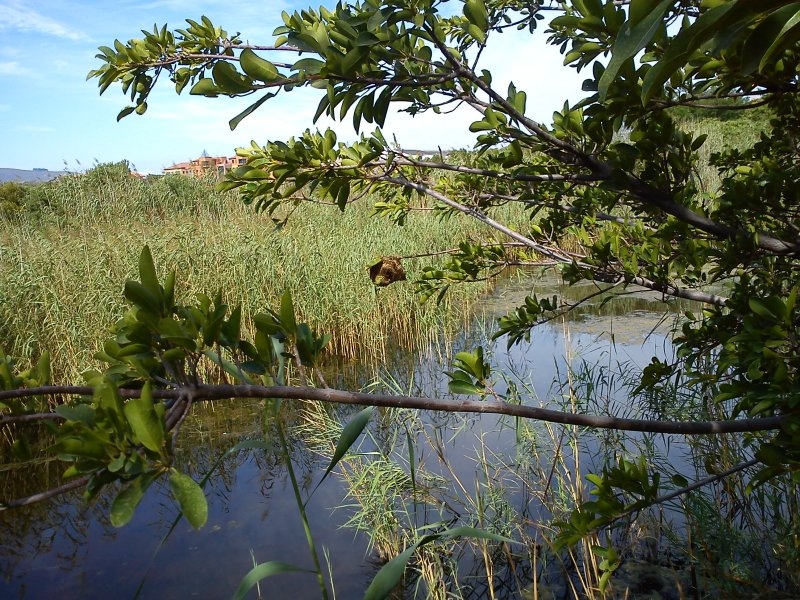 The cool bit about visiting the man-made island, built to encourage birds to nest and breed and because both the birds and the wetland ecology help purify the canal water, is that you reach there either via a bridge across the canal, or, more excitingly, on a boat.

If you’ve little ones with you, this is a whole trip on its own, and our boat driver, Themba, and our guide on the island, Skhombuzo, were both incredibly knowledgeable and child-friendly.

It felt just a little like doing Venice (with giant assistance from the imagination, it is true) to get on the boat and head off along the canals at Century City. In fairness, these modern gondalas don’t come close to the smog-belching public transport that have largely replaced the romantic notion of a gondala along the canals of Venice. 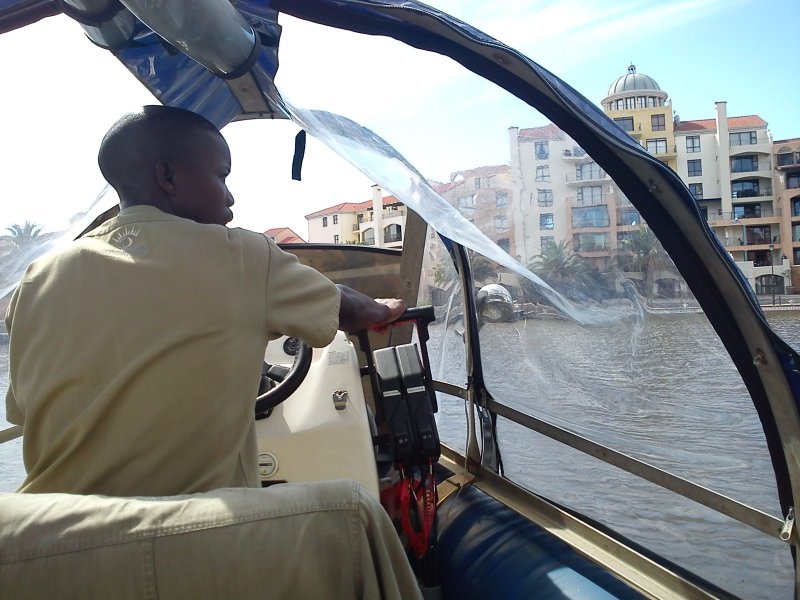 The boat we were on hardly belched at all, and had a really contemporary look, plastic overarching enclosure and all, that firmly matched the impression of Century City as thoroughly modern.

We were impressed, though, at the green credentials of Intaka Island and its new Visitor Centre. Century City is a labyrinth of a shopping mall that I usually avoid like the plague. It seems to mushroom by the day as further business parks and highrise apartment blocks are added to the already over-stretched surrounds. Generally, I fail to see the romance in living like this.

But Intaka Island has swayed my jaded perspective somewhat.

Having just watched our son claim his medal for cycling his first mini Argus (he thought he’d won the race, bless him), we set off to claim the discount at Spur, my misgivings at the prospect firmly over-ruled by a spouse who had no idea what he was in for, and a son who thought eating out, anywhere, was better than lunch at home. 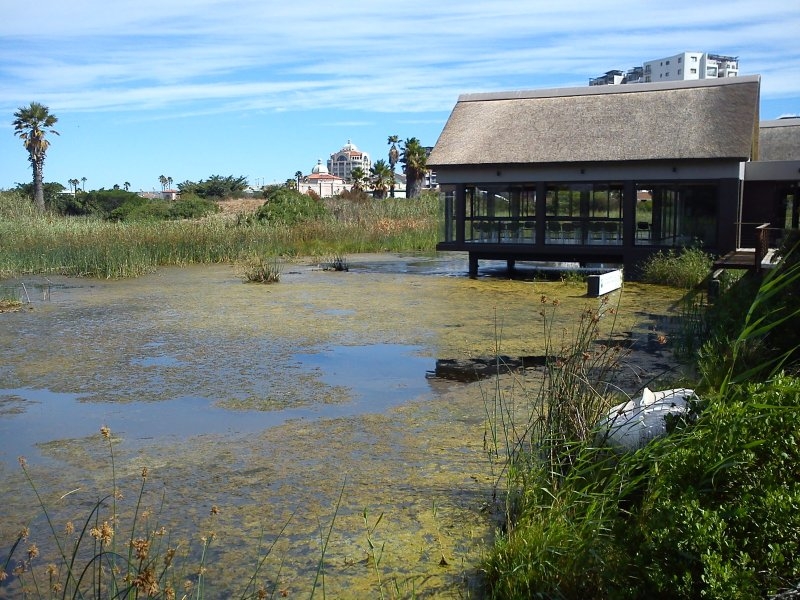 An hour later, we peeled our son’s glazed eyes away from the thumping, hyped and wired excuse for a ‘children’s corner’ (calling the presence of Sony Playstations and thumping music ‘child-friendly’ is pushing the envelope to my mind) and headed for open ground and blue skies overhead, in a bid to reclaim our sanity.

The photo moment potential of Intaka Island is huge. The views from here over Century City and Table Mountain are incredible and, at the right time of day, provide incredible shutterstock capacity – the juxtaposition of nature and modern highrises against the table top, irresistable.

The island is no less so. Skhombuzo greeted us, the new eco-centre behind him. It was built only late last year and makes use of solar panels, photovoltaic panels, wind turbines, rain water harvesting, recycling, earthworm farms, compost bins and grey water systems. All the plants here were grown from seed in an on-site nursery too. It’s a great place to see ‘green living’ in action. 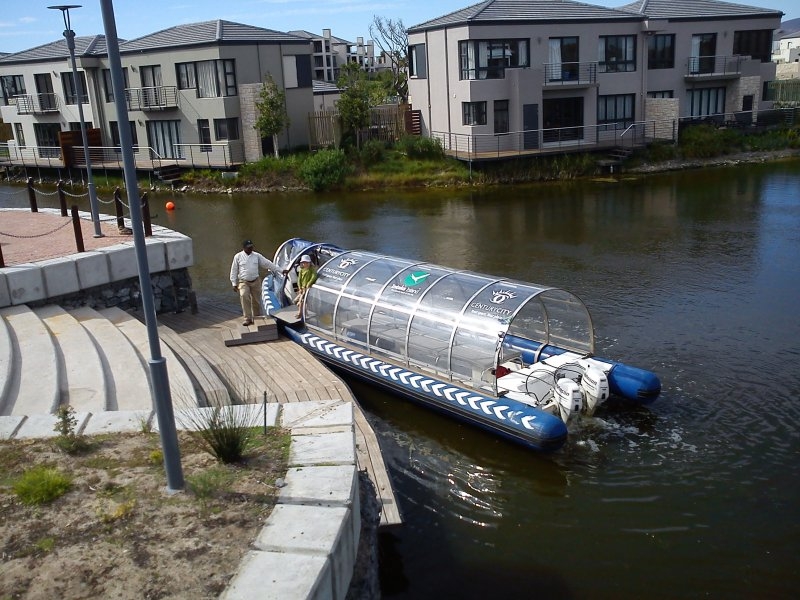 The reeds of the wetlands help purify the water of the canals that is a closed system. They seldom pump new water in, and the water, despite being slightly green because of the extensive sunshine, was clean and did not smell at all. There is even a succession of submerged plastic tanks to help collect the bird poo (or guano) that would be a real problem if continuously allowed to enter the water system.

Intaka is Xhosa for ‘bird’, and roughly 125 species of birds live here in amongst the buildings. One can understand why. The space provides a real lull and breathing space for wildlife.

This comparitively tiny space gives birds seven habitats from which to choose that include open water, shallow water and shoreline, reed beds, bush and trees and grassy areas, and if you are still (which with a five-year old in tow you most certainly are not) then you can see anything from red eyed doves and Cape robins to pied kingfishers and herons.

Intaka, which used to be known as Blouvlei, has been here since 2001 and is a series of three islands. Whilst the western half is the wetlands, the eastern half is a series of seasonal pans and rare types of fynbos, in need of conservation. Originally the area that is now Century City was covered largely by alien vegetation and a few degraded wetlands used by waterbirds. 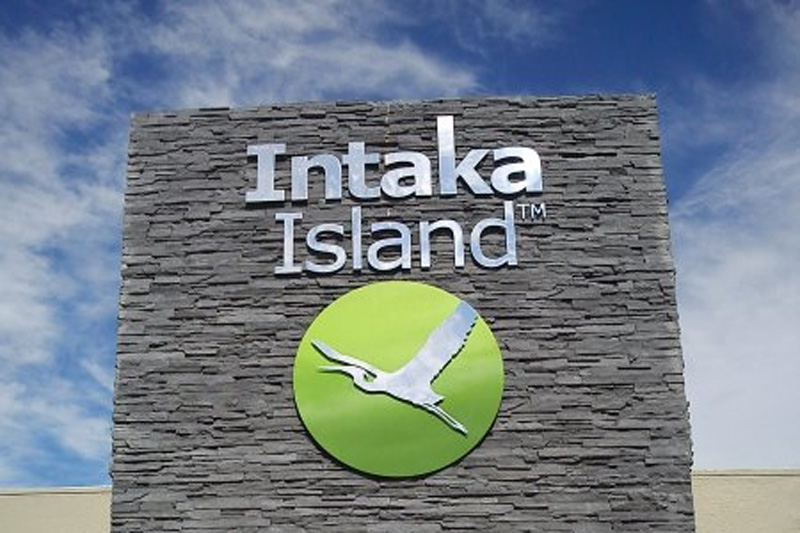 Find Intaka Island on the corner of Summer Green road and Century Boulevard, Century City, Blaauwberg.
Open every day from 7.30am until 5pm.

Pettit Fours Deli, Onse Huisie, beach, beach, beach and postcard images of Table Mountain... Some call it Blaauwberg, others Blouberg, and the British cannot say it at all. On a temperate summer's evening everyone who's anyone heads out there. It's kind of ...

I have to admit, I haven't been to Ratanga Junction in years - I remember when I was at school it was all the rage to spend as many weekends as possible at Ratanga. Going on every ride until we were delirious with adrenaline and excitement. So when a friend su...