It is more than a little fitting that Zevenwacht Wine Estate should lie on Langverwacht Road in Kuils River.

We found ourselves on Bottelary Road in Bellville, a road we were not familiar with – something we enjoy doing on a weekend; seeing where the road takes us – and as we headed into and past Brackenfell, our hopes (a long time waiting) at finding a lunch venue extraordinaire diminished somewhat – Brackenfell hardly equates with sprawling vineyards and mountain views. 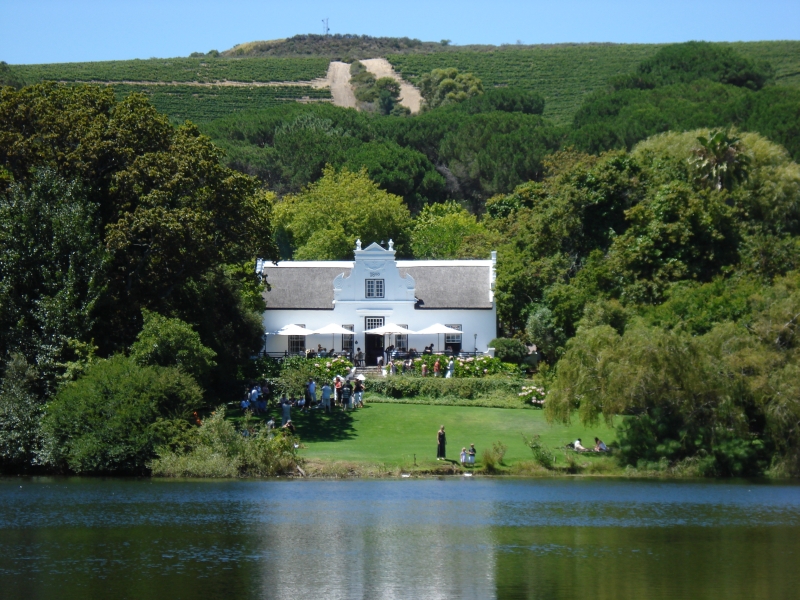 Fortunately for us, Zevenwacht was sign-posted left off Van Riebeek Road towards wine country on Strand Road, and we found ourselves heading up the hill to one of the lesser known wine farms in this part of the world.

The lower reaches of Zevenwacht (it lies on the hills above Kuils River) are dominated by garden ‘estates’; gated villages that have become fairly commonplace on wine estates. The architectural character of the estates were in keeping with a wine estate – in the historic cape cottage, tin roof and gable style – so that despite this development on the lower slopes, the estate up on the hill certainly didn’t seem to be in any way diminished.

The estate itself eludes one, giving extra potency to its position on Langverwacht Road – it is really ‘long-awaited’ by the time one bends the curve of the driveway and sights the manor house directly across a shimmering lake. Only the swans were missing to complete the picture, although there were a few ducks. 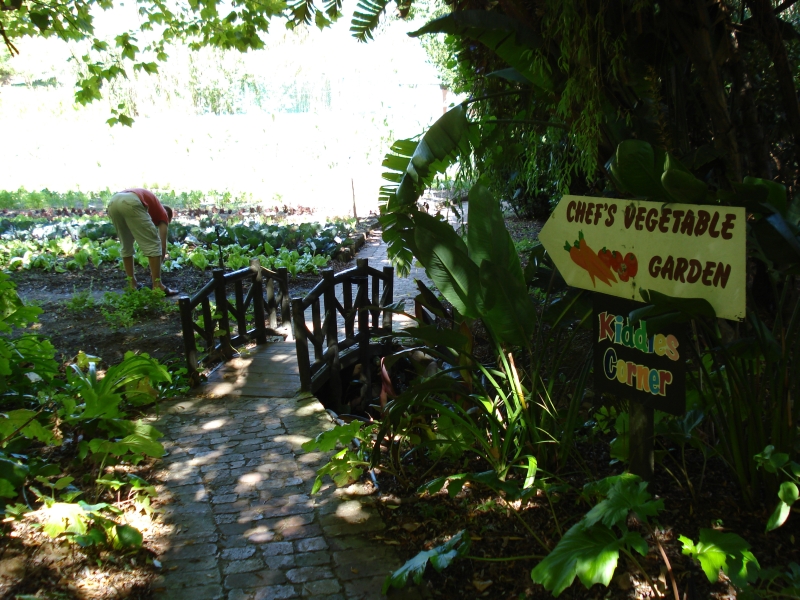 One travels uphill for a fair amount of time, leaving the residential country and equestrian estates well behind. Zevenwacht, or ‘seven expectations’ – called this for the ‘at least’ seven delights that apparently await visitors to the estate – is part of the Stellenbosch wine route. It’s a fairly small affair and vineyards cover 200 hectares of the 450 hectare farm. The views from here over Table Mountain are, to say the least, gorgeous.

The restaurant is set in a 19th century Cape Dutch manor house that is quite simply beautiful. It rests on the sloping banks of a lake bordered by pretty gardens, and from the other side of the lake looks like something from out of a picture story book. It has apparently been fairly recently restored, and its rooms, wooden floors, gorgeous gables and tasteful furnishings are worth a visit, even if you’re not going to stay for a meal.

The restaurant describes its food as ‘contemporary continental cuisine’, which essentially means it serves something for everyone. Salads, aside from the conventional Caesar and Greek version, also include an original poached pear and blue cheese salad, and main meals include items such as crispy duck, roasted rack of lamb, pork fillet, sirloin steak, Norwegian salmon wraps, a parmesan vegetable basket that sounded particularly tempting, vegetarian penne, and wonderful curries. 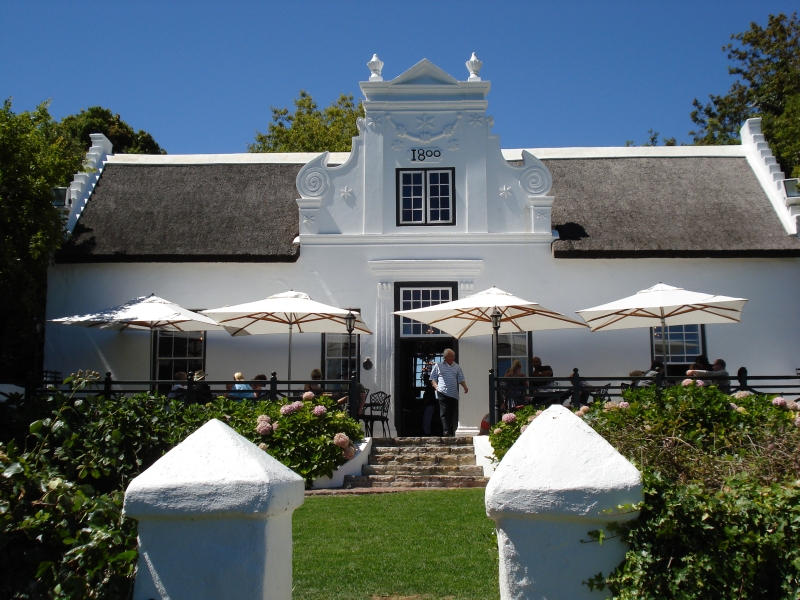 This veritable feast uses as many vegetables, salad leaves and herbs as it can from its own garden, growing literally a few metres away. The only downside is that they’re definitey not organic as the estate sprays its grapes.

Desserts include crème brŭlé, lemon sherbets, cherry jubilee, rooibos poached pear with a pineapple tart, French meringue with caramelized bananas, raisins and a brandy anglaise, as well as Zevenwacht’s chocolate delight, which wafted past me just as I was seated – a chocolate envelope filled with chocolate mousse and served on a bed of orange segments and a vanilla tuille biscuit – hmmm hmmm!

The restaurant’s service was faultless and they went out of their way to make us feel at home, particularly as we had to content ourselves with an indoor table next to the window as the patio was full. But we were soon consorting with the hoi paloi out on the stoep, the views over the lake definitely one of the finest luncheon views imaginable. 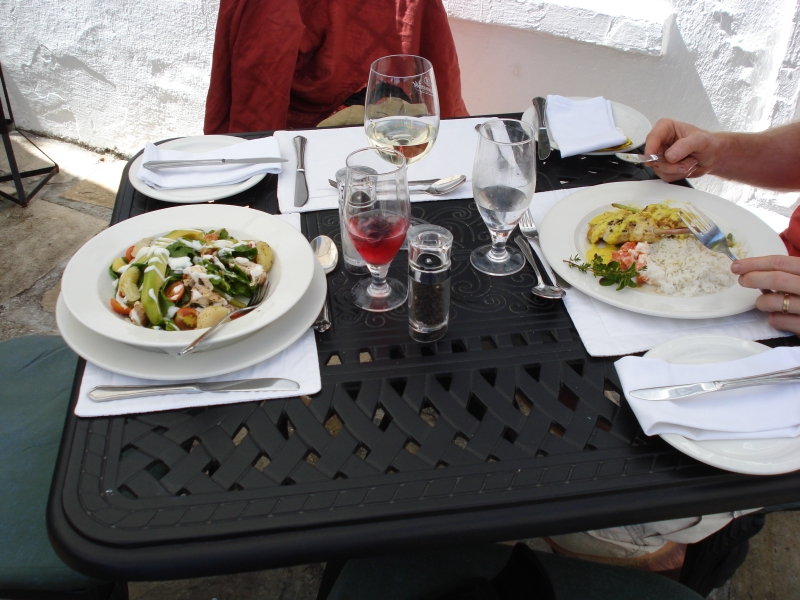 My better half savoured a surprisingly fruity glass of Sauvignon Blanc 2009 that I can highly recommend, having taken more than a couple of sips (I was the designated driver). The best part about it was that the acidity was down played whilst a tremendous fruitiness dominated.

It’s described as having ‘a palate of granadillas and gooseberries, accentuated by a juicy, fresh acidity which carries the fruit right to the back of the palate and prolongs the lingering after-taste’ – couldn’t have put it better myself.

I had a wonderful warm potato and roast chicken salad that came served on a bed of baby spinach leaves with avo, cherry tomatoes and a yoghurt dressing. It was filling and they weren’t shy with their ingredients. Our other meal was a wonderfully tender chicken tikka. It creatively skewered chicken pieces on lemongrass, served on a bed of lemonzest balsamic rice with vegetables, and a paw paw, coriander and feta sambal. 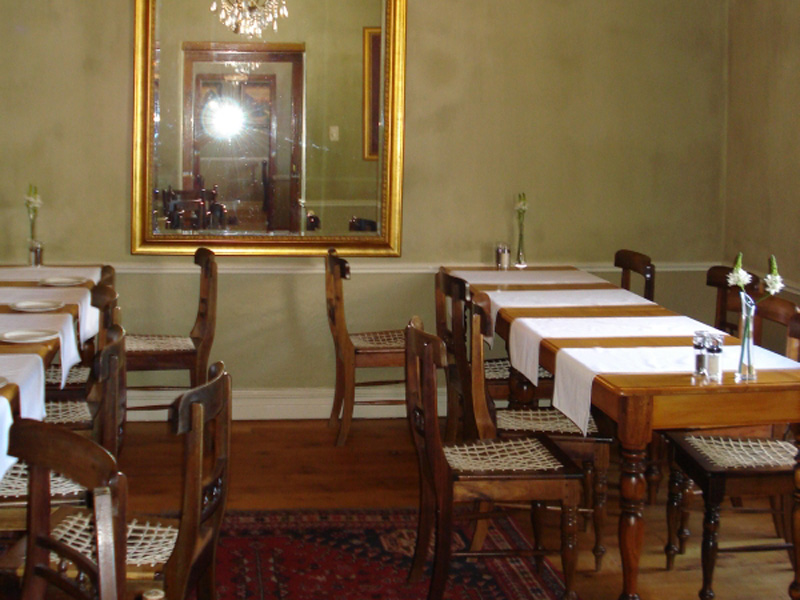 The restaurant is also no stranger to children and has a kiddie menu, whilst the garden serves as a great distraction for after they’ve fed. There is also a play park for children, although having lunch closer to this facility involves buying a picnic hamper beforehand from the estate, a lovely option, but one we didn’t feel inspired to take.

Zevenwacht offers vineyard and cellar tours, full-time chef’s courses, a cheesery that produces a farmhouse cheddar, the Mangwanani spa, and a series of vineyard cottages, chalets, and a country inn with luxurious suites.